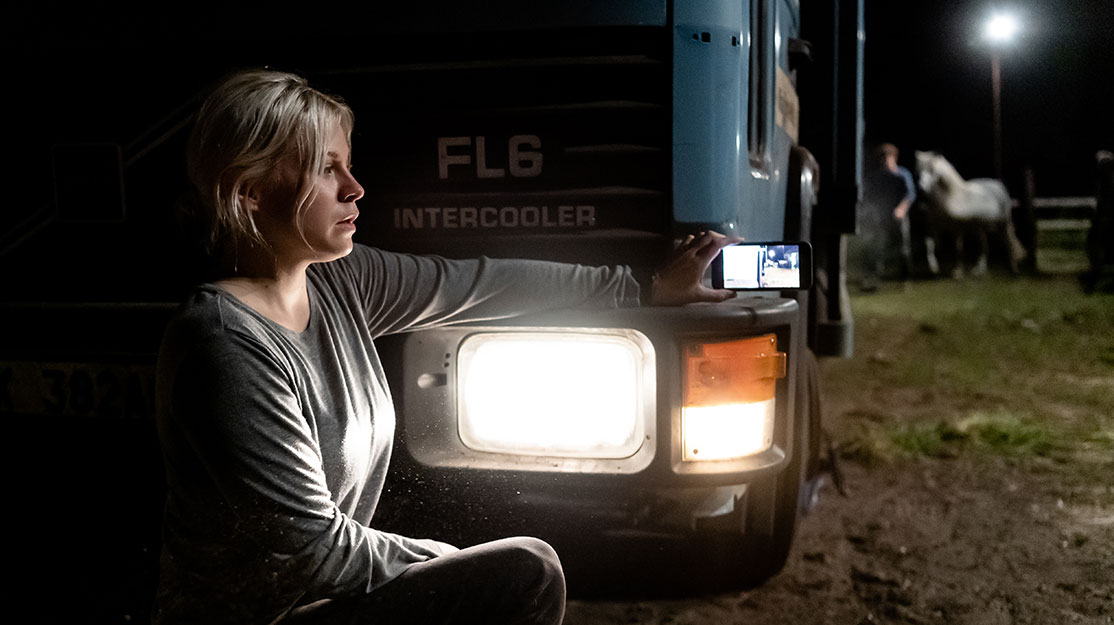 Award-winning director Auli Mantila reveals how she made Finnish drama Transport, set within the world of Europe’s illicit horse trade, and explains why there needs to be more bravery in television.

As an equestrian and a working farrier, Finnish director Auli Mantila was able to combine her two passions – horses and filmmaking – for the first time with eight-part drama Transport.

But in the story that unfolds, there isn’t much horsing around. Instead, from Finland to Belgium, an ensemble of characters slowly become embroiled in a plot involving food safety that leads them to uncover Europe’s illicit horse trade.

Johanna (played by Emmi Parviainen) is a journalist who begins to investigate the origin of a microchip found in baby food and is shocked to discover it leads back to a family-owned horse. Meanwhile, Marianne (Pirkko Hämäläinen) is a bank manager who fails to cover up a mistake and falls prey to something bigger. Then when a border control veterinarian goes missing, insurance investigator Inkeri (Maria Heiskanen) is determined to find out what has happened.

With a screen career that dates back to the early 1990s, Mantila has written and directed feature films, TV movies and episodic series – but it’s the small screen she built a special relationship with even before the ‘series boom’ of the mid-2010s.

“I come from a working-class family so I grew up with TV. It’s more familiar to me than films are,” she tells DQ. “And I love TV because, in my world, it’s always an effort to go to movies. TV is very accessible and, if you like to reach people and get them thinking, TV is a great place to be.”

When her thoughts turned to the themes behind Transport, Mantila didn’t imagine making a TV series. She simply started thinking about food safety and the freedom of movement afforded to people, money and goods within the European Union. The project then naturally became a TV drama when she found there would be too much story to fit into a film running time.

As a “horse person,” Mantila started reading about how horses are transported across Europe and found a report from British charity World Horse Welfare that explained a lot of the regulations around moving animals. That report would later inspire plot lines within the series, while Mantila focused on creating the characters and working out how to tell this story without lecturing the audience. She also wanted to ensure it would appeal to people who had no interest in horses.

“One of the things I wanted to achieve is the feeling that they [viewers] could understand that this is really happening right now,” she says. “I am tired of violence and tired of suspense based on who’s going to get hurt next. I wanted to challenge myself to write something that is not based on fear of violence.

“It required a lot of research in how to make the puzzle interesting and familiar to people. People who drive in their cars and see horse trucks, they immediately think, ‘What’s in it?’ One of my main goals was to make it look and feel like it could really happen to any one of us.”

In all of Mantila’s work – from films such as Neitoperho and Ystäväni Henry to series Hopeanuolet – there are two themes she likes to tackle: responsibility and friendship. While responsibility is taken on or discarded by numerous characters in Transport through the choices they make, characters also become connected to each other during the story, not least Johanna, Marianne and Ikeri.

“People like to read and watch detective stories and true crime. They are interested in riddles and puzzles and sit on their couch figuring things out. This is part of the suspense of the show, which is not based on fear of violence,” she says. “Rather, it’s based on who did what and how these things are connected. Obviously, I hope in the end it pays off and I also hope it doesn’t take too long for people to get a grip on how people are connected so they can follow them easily through the storyline.”

Having attended film school and started her career at a time when directors would write their own screenplays, Mantila has continued that tradition on Transport, writing and directing all eight episodes. “I’ve always done that, so I don’t know anything else,” she says.

But she also recognises she cannot be writer and director at the same time, which means she insists on locking down all the scripts before she even begins to contemplate directing. “That’s what I’m educated to do, but I also know that if I went on set and didn’t have it in my hand, people working around me would have a horrible time trying to guess what happens next. There has to be clarity, and the only way to bring clarity is to divide these two professions.”

Those scripts contain vivid parentheses and notes so those working with Mantila know exactly what she is looking for with each scene, location or costume. “That also stems from the fact I’m a director, because when I’m writing it, I already see how it’s going to be done,” she says.

Mantila also writes her characters with specific actors in mind – a tactic supported by holding early script readings with said actors to get an idea of what their performance might look like once the cameras are rolling. So did she get the cast she wanted for Transport? “Yes I did, because I approached them early enough,” she says. “For example, Maria Heiskanen, I have worked with her before and she agreed to join us, so I was really happy. I got the main cast – 80% of the people I wanted, I got to come in.”

Her bold approach to casting was boosted further by the fact that Finland’s national broadcaster, YLE, was on board the project even before Mantila partnered with Helsinki-based producer Tekele to make the drama. Reinvent Studios later picked up distribution rights to the series, which is due to debut this spring.

“I have been working with YLE for 20 years, so they know me and they already know how I work,” she says. “I had the script, the storyline and all the characters ready before I approached the producer. It’s easier to write if you are free. When you are with a producer, you have already made some kind of promise [about the kind of show you are making], but when I was just toying and playing with my ideas with the TV station, I was totally free. I tend to go where there is the most space. I don’t like crowds in terms of creating ideas.”

Shooting the series took place over seven months, first in Belgium, where filming was completed in between Covid-19 waves last autumn, and then in Finland, where the schedule beat another rise in infections. As a “bit of a maverick,” Mantila admits she was annoyed at having to work under so many precautions in a controlled environment. “It really pissed me off sometimes, but what can you do? It’s fighting the inevitable – a bad idea. You just have to accept it,” she says.

That willingness to go with the flow reflects Mantila’s wider approach to directing. She says she tries to be as honest as possible, shooting scenes in whatever conditions are presented on a given day, without postponing or reshuffling the schedule. “If it rains, I let it rain. If it shines, let it shine,” she says. “We were shooting for seven months straight so, right away, the cinematographer JP Passi and I agreed we would never complain about the weather. As a director, I’m very flexible and I always accept the circumstances and never work against them. I try to work with them.

“It’s the same when it comes to my actors. I have to have a clear idea of what I want to do to be able to adapt to the circumstances, but I’m very flexible and I also like to listen to what people are suggesting and offering me. Fighting the inevitable is just a waste of energy. I’d rather say OK and carry on. I’ve done this long enough to understand that’s the best way to get things done. It’s also due to the hard work of the producers. They really backed me up and really trusted our judgement during the process.”

Mantila’s extensive preparation for the shoot meant she also avoided any unfortunate surprises while filming. “I’m like a train on a track. It’s not anything flash,” she adds. “If I think about myself shooting, there’s nothing to write home about. You just get the work done because you keep your eye on the ball and keep going. If nothing surprising happens, you’re on the right track. It’s kind of boring. It’s hard enough trying to make it good – no surprises, please.”

The series ultimately speaks about responsibility and the choices characters make – to travel or not, to take the money or not. “All these little choices we make, they have consequences,” Mantila says. “I won’t say where you have to go or what you have to eat. I just want people to think about it or to understand that all choices have consequences. We are all responsible.”

Mantila is now among the nominees for the 2022 Nordisk Film & TV Fond Prize, which recognises outstanding writing on a Nordic drama series. Transport, she says, stands out because she doesn’t try to copy anyone else, she takes her time and she doesn’t see writing and directing as a job.

“Nowadays, you have more directors and writers and we have more opportunities because it’s so overheated, this series boom,” Mantila says. “People are dragged out of school to make series and do their stuff. It’s so overheated that sometimes people don’t have time to think about what’s good for them, what they should be doing or what they would like to do. They are so busy with doing one show and the next show and the next. I just take more time than others, but I don’t know if that’s good or bad. It might also be because I’m slow. It’s just how things are.”

Reflecting on Finnish drama more generally, Mantila believes finding originality is increasingly difficult while it is safer to put a local spin on established ideas or tropes – the ‘Finnish Silence of the Lambs’ or the ‘Finnish Succession,’ for example.

“This really is something producers, scriptwriters and directors should think about. Success does not come from doing the same thing but by trying to bring something new. We just need to have a bit more courage,” she says.

“I’ve had good feedback about the series, that the characters are different and the world and the plot are different and people like it, but still there is the question are people ready for it? Everybody says they want to be different but, when it comes to the moment when you have to decide if you are different or not, that’s when you need to have courage.”