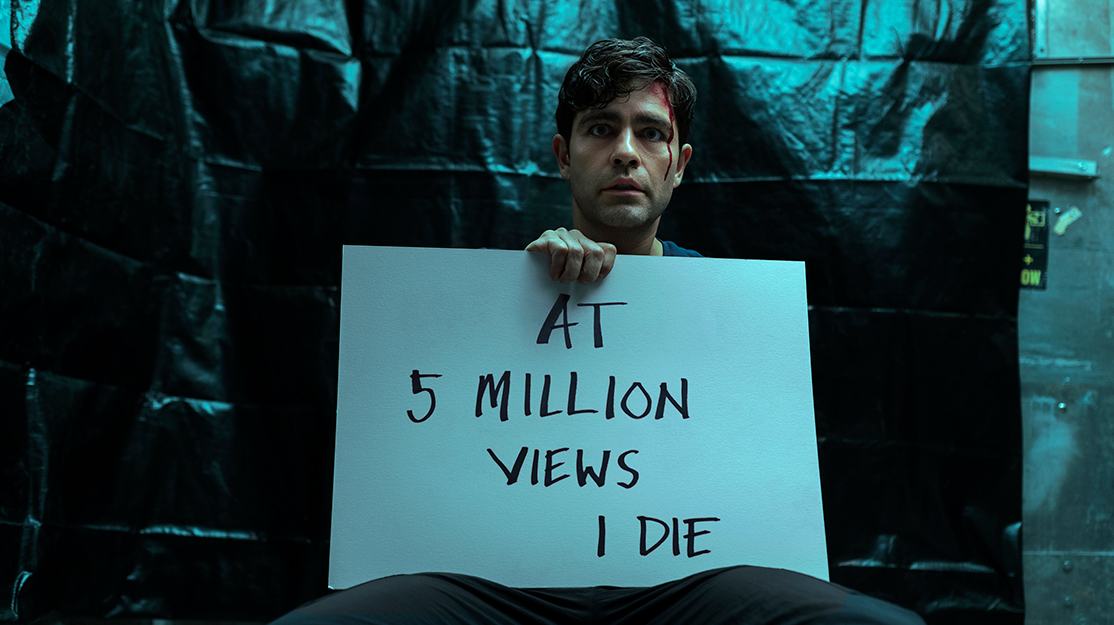 Rising to the bait

Showrunner Tony Ayres takes DQ inside the making of Clickbait, a high-stakes thriller that uses multiple perspectives to tell a story about a man threatened with death in a mysterious online video.

In the opening episode of Clickbait, a man is placed under the threat of death. But rather than a ticking clock counting down the seconds until his fate is sealed, tension and suspense is built using a very modern device: a website view counter.

After a family dinner ends in arguments and recriminations, Nick Brewer (Adrian Grenier) suddenly and mysteriously disappears. A video then appears on the internet of a badly beaten and bloodied Nick holding a card that says: “I abuse women. At 5 million views, I die.” While his sister Pia (Zoe Kazan) and wife Sophie (Betty Gabriel) rush to find him and save him as the view counter steadily ticks upwards, they uncover a side of Nick that they didn’t know existed, leading them to question whether the video is a threat or a confession.

Told across eight episodes, each part of the Netflix series will see the unfolding story told from different perspectives as it becomes clear there is more at stake for each character than just the part they play in the attempt to rescue Nick.

The series is produced by Australia’s Matchbox Pictures, Tony Ayres Productions and UK-based Heyday Television, all part of NBCUniversal International Studios, though the final project is somewhat different from the idea that co-creators Ayres (Glitch, Stateless) and Christian White first pitched to the UK’s Channel 4.

“Christian wrote a script that was based on a kidnapping, but it was a teenage girl being kidnapped,” Ayres tells DQ. “I had just done The Slap [a family drama told from different viewpoints] and we put those two things together to make it a look at the kidnapping from eight different points of view.”

Ayres then pitched the show to C4 but, owing to other series similarly featuring a kidnapped young girl at the time, the broadcaster turned down the project and the writers went away to find a different take on the story.

“Christian and I put our heads together and we started looking at this new world of crimes that had been created by the internet,” Ayres continues. “Christian did this extraordinary research document and we just deep dived into all of these ways in which things online end up having real-world effects. At the time we were developing it, that felt like something really at the cutting edge of what was happening in the world, so we applied the idea of The Slap to a completely different crime.

“We constructed the series from a number of real-life crimes that had been committed around people doing things on the internet in bad faith and in apparent anonymity as a release for the darker sides of your personality that are not so civil. We constructed the show around that and, as it turned out, we ended up selling it to Netflix in America and resetting it in America. But it still felt like a really cool way of approaching that genre.”

Ayres compares the difficulty of executing the show’s multi-perspective structure (episode titles include The Sister and The Detective) to performing the perfect Olympic dive – twisting and turning and hoping you don’t bellyflop the landing.

“It’s a really tricky one because you’ve got to still have central characters that go through the series, so every time you pivot a point of view, you’ve got to do it in a way in which your central characters still somehow have a stake in the story,” he explains. “It’s a really interesting and rewarding format, because you get to see an event from different perspectives.”

The perspectives are split between those inside Nick’s family – sister Pia and wife Sophie among them – and those outside the family, such as Detective Roshan Amiri (Phoenix Raei). Other characters to feature through the series include news producer Ben Park (Abraham Lim), social media moderator Simon Oxley (Daniel Henshall), Nick’s best friend Matt Aldin (Ian Meadows) and Nick’s work confidante Dawn (Becca Lish).

“You have people who are right at the centre of a big dramatic event and then you have all the people on the periphery, but for whom that event means something else,” Ayres adds. “For instance, when we go to the detective, what this kidnapping means is an opportunity for a promotion. What can be a life-or-death situation for one person becomes a career move for another.”

Ayres and crime novelist White would pass script drafts back and forth between them after breaking down the plot in the writers room, where they developed the idea of  the’ fractured self’ that became one of the show’s central themes.

“Normally we are a multiplicity of selves. We present our social self and then we are ourselves in a relationship. Then there is our professional self – we’re different with different people,” Ayres says. “But then the internet has also given us a whole new range of selves, which we’re constantly performing or presenting to the world. You have your self on Instagram, you have your self on Facebook, and then you have your browser history, which is like your secret self.

“I was interested in how that can lead to a fracture, a cognitive dissonance, because I see the consequences of that happening in the world on a daily basis. We’re seeing how people are going into rabbit holes of disinformation often based on who they think they are, based on their senses of themselves or their identity. They will assume a set of beliefs, sometimes unquestioningly. All of those things are really interesting. They’re an interesting site for drama.”

That theory is applied most immediately to Nick. Here is a man who is seemingly a loving father, husband, son and brother – despite his early rows with Pia – yet in the online video that emerges, he is being outed as an abuser of women. Is it an accusation or a confession? Is he a victim or is it a signpost to a darker side of his character?

Nick isn’t the only character in Clickbait with secrets, however, and many revelations that come to the surface do so with the risk of dangerous consequences. It means the ensemble of characters aren’t split between heroes and villains, and viewers will instead come to understand how these characters get caught up in different forms of bad behaviour.

“Ultimately, if the show has a simpler message, it’s that we can’t always believe what’s in front of our eyes,” says Ayres, who is also an executive producer and the showrunner on the series.

Set in Oakland, California, but filmed in Melbourne, Australia, Clickbait shot six episodes before the production was shut down early last year by the first wave of Covid-19.

“Showrunning a show in a pandemic is a particular kind of hell,” Ayres says. “But kudos to the producers and the production company Matchbox because it was logistically so difficult, especially given that the show itself was logistically very complex because we were shooting an American-set show in Melbourne. We were also bringing a lot of people into Australia at a time when travel restrictions applied. It was difficult but, hallelujah, we managed to finish it.”

The show had originally looked to film in Canada on a “good Australian budget” but one that would be stretched if filming took place in the US. The volume of series being filmed in Canada eventually ruled that option out, with Ayres and his team opting to film closer to home – a decision he says was “absolutely the right thing to do in the long run.”

When filming did resume amid the ongoing pandemic, it was one of the first productions to restart in Australia, but the lack of coronavirus cases in the community meant “everyone felt pretty safe,” Ayres continues. “It felt like a good way of finishing the show. We were really fortunate. We were one of the first shows to come back up. A huge number of our crew came back and we got all of our cast back. We had a bit of a blessed run after a pretty unlucky stop. We were a month away from completing when we were shut down.”

Few changes to the script were needed to complete production, although scenes were set outside as much as possible and the directing team – led by Brad Anderson (The Sinner) – were tasked with finding new ways to show groups of people together. From the start, however, Ayres and White’s most pressing challenge was plotting a series that would stand up to the sophistication of modern audiences when it debuts on Netflix tomorrow.

“We were really keen to jolt the audience every now and then. We knew we had to keep people on their toes,” Ayres says. “Every episode points to something else that is quite major and surprising. The question that drives the series, which Netflix have been very clever with in terms of selling the whole show around it, is who is this guy and what did he do? That central question keeps us going throughout the entire series.”

All the time, however, the writers were keen to ensure every twist and turn was earned by the story and that decisions would always be credible and grounded in the characters who make them.

“As an audience member, I get really crotchety if people do things that just don’t make sense or for the sake of the plot or a cliff-hanger,” Ayres says. “We really tried to bed everything down into the logic of who these people were and what they would do. There’s a high degree of difficulty in trying to make that work, and I guess we’ll find out whether it does work if people watch it and don’t throw their remote at the television.”

He adds: “The thing about this show is its full meaning lays itself out over the whole series. There’s a meta message, which is about why we as a society are so fascinated by crime as entertainment. Hopefully that will be part of the conversation.”