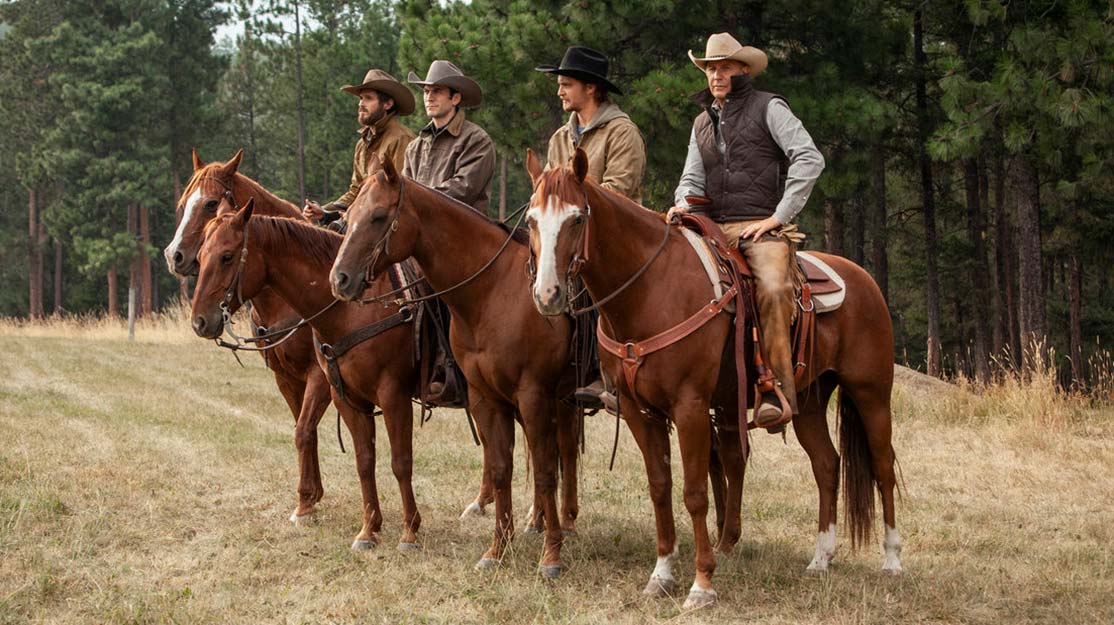 Place Kevin Costner into a drama about a cattle ranch dispute and set it against the backdrop of some epic Utah and Montana scenery, and on one level Yellowstone delivers what you might expect.

But scratch under the surface of Paramount Network’s latest original and this Taylor Sheridan-written show offers a multifaceted take on a part of the US that has been little-used in TV dramas of late.

The series tells the story of the Dutton family and, in particular, Costner’s John Dutton as he juggles illness and family bereavement while attempting to ensure his huge US ranch maintains its borders and deters encroachment.

Sheridan, the man behind movies including Hell or High Water and Sicario, created the show alongside John Linson, with both exec producing, while Wes Bentley, Luke Grimes, Kelly Reilly and Gil Birmingham are among those in front of the camera. And it’s that combination that has helped the show secure an extended 10-part second season with the first run still airing.

For Bentley and Birmingham, the key to the show’s success has been Sheridan and his carefully crafted script. Bentley’s Jamie Dutton might be part of the family but working for the ranch as a lawyer has distanced him from his father, while Chief Thomas Rainwater, played by Birmingham, heads up a nearby Native American reservation that borders the ranch.

Both actors say Sheridan – himself a former actor with major roles in the likes of Sons of Anarchy – is also a “hands-off” director who allows the cast to play their roles to their fullest.

“There’s sometimes a synchronisation that happens with creative people and you develop a shorthand of understanding, and he was a real hands-off kind of guy,” Birmingham says, speaking at SeriesFest in Denver in June. “He just knows who to cast for the roles he has and then you just get out of the way and let the story tell itself.”

“And you can trust that hands-off approach because he does step in when there’s something really specific that he wants you or someone else to do,” Bentley adds. “That gives you a lot of confidence.”

Given the show’s setting, there are inevitably stunning sweeps of the Montana and Utah landscapes, and Bentley says the production teams, which include Linson Entertainment and Costner’s Treehouse Films, were keen to reflect movie-sized ambitions. But it’s when they talk about the script that the duo really light up.

Birmingham says Sheridan is “totally open to collaboration” when interpreting the script but adds that “because his writing is so precise, you don’t really want to touch anything or change it because you’re not likely to come up with anything better.”

Birmingham’s Rainwater represents his reservation and fights for those who live on it – including one of John Dutton’s own children – but arguably in a different way to how Native Americans are normally portrayed on screen. “Initially Rainwater is almost assertive because Native Americans have had to come from a hole to get any recognition or power,” Birmingham says of his character.

“I can’t remember the last Native character in contemporary times who was given the kind of power Rainwater has, and the way he was able to do that was learning how to play the white man’s game. So he has the opportunity to retrieve and reclaim the resources beyond a casino – there are so many layers.”

Clearly this is a story with deep roots in the past – John Dutton is part of the sixth generation to farm his family’s land – but there are also numerous strands within the characters’ arcs that allow the exploration of different contemporary topics.

It helps to provide an opportunity to explore who’s fighting for what, Birmingham explains. “Rainwater informs [Dutton] of how small his picture is – my picture is much bigger than what he thinks we’re fighting about. I love the way Taylor structures that.”

So, it turns out, do the viewers. The show has become a breakout hit for Paramount, with its third episode becoming the second most watched cable drama of 2018, beaten only by The Walking Dead.

While part of Yellowstone’s allure is surely its picturesque setting, neither Bentley nor Birmingham spent huge amounts of time on location, though the latter did make it onto a horse.

“One of my favourite scenes was with Kevin Costner and the buffalo hunt – that was my only outdoor scene on a horse. I said I didn’t ride horses and they said, ‘OK, you’re the guy who’s gonna ride out of the scene then.’ All the people there, including my Native brothers, were all major horse people and they were just watching me. I mean, I ride horses but nothing like these guys.”

Bentley, meanwhile, was one of a number of actors taken out with real-life cowboys to give them a taste of that lifestyle, although he had previously owned a ranch and horses.

As it turned out, Jamie Dutton spends more time in suits than spurs, but Bentley was keen to get to the core of what his character was about. “We talked a lot about Jamie. I wanted to be really specific about what kind of law he went into and if he wanted to go into law, which is something we still discuss,” he says.

There is also uncertainty over Jamie’s sexuality, which Bentley argues plays into his character’s persona. “I don’t think there’s a decision on that and I think that’s great. I like not knowing as far as Wes is concerned, but also not knowing as far as Jamie is concerned. Given that Jamie has given his life to his job and his work and his family, I’m not sure if he even knows yet. That’s something I think has been really interesting.”

At its core, perhaps, the show is attempting to explore what it means to be good, something Birmingham suggests emerges through the multi-layered script penned by Sheridan.

“That’s the brilliance of Taylor’s writing, it’s so layered,” he says. “The reveals of a lot of the backstories for the characters come down the line – I saw it in Hell or High Water too – and I’m totally in a trusting place and excited about it because you don’t really know how things will be revealed.

“That’s what draws the audience in. And it feels more satisfying to me, because you have to watch a Taylor film or series a couple of times to really get the whole picture, to see what you’ve missed that might have been integral to the story.”