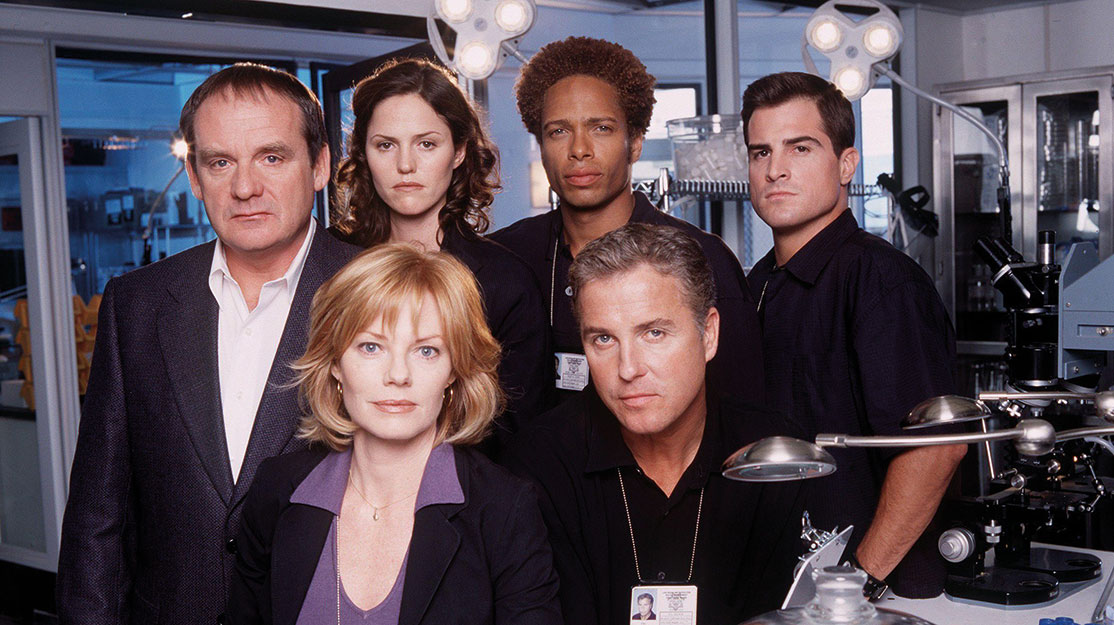 Twenty years after CSI: Crime Scene Investigation first aired, creator Anthony E Zuiker recalls the origins of the show that spawned three spin-offs while redefining police procedurals and the use of forensics on television.

The Sopranos is regularly lauded as the series that changed television, pushing the boundaries of serialised storytelling while showcasing the freedoms that cable TV could afford writers and directors.

The landmark HBO series launched in January 1999, but the following year saw the emergence of a ‘traditional’ network police procedural that would blend crime and science to catch criminals in a whole new way – and become the most watched TV series in the world.

CSI: Crime Scene Investigation debuted 20 years ago to this day, inviting viewers to follow a team of forensic investigators as they crack cases by scouring crime scenes to collect the evidence that solves the mystery.

But what made the series stand out from the start was its focus on DNA and the use of blood, saliva and skin as evidence to help solve crimes. It became the number-one show in the US in its third season in 2002/03 and was named the most watched series in the world at the Monte Carlo TV Festival on numerous occasions.

“I was a little surprised I didn’t know about forensics or crime scene analysts; I didn’t know what they were. I thought they were all cops,” says series creator Anthony E Zuiker. “I had no idea of the intricacies of a crime scene. So when I figured out real CSIs do this, I was able to take a different point of view of a cop show.

“We were showing reenactments and scientific experiments, and it meant something in the story. We had a great cast, great writing, great directing, but the execution of how to tell a crime story was completely genre-changing for the whole world. Everything before CSI seems laughable, because no one really took gloves, booties and preservation of evidence seriously. Everything changed after CSI.”

CSI’s origin story begins in July 1999, when renowned film producer and director Jerry Bruckheimer was starting to dip his toe into TV with action series Soldier of Fortune. Zuiker was then approached by Jonathan Littman, president of Jerry Bruckheimer Television, about partnering on a series.

“I ironically saw a show called New Detectives on Discovery. After I saw that unscripted docudrama, I was inspired to take the forensic point of view of a cop show and fictionalise that in my hometown of Las Vegas,” Zuiker recalls. “Jerry liked the pitch, so we pitched ABC but they said no. Then CBS said yes.”

In a writers room of up to 12 people, story ideas would be ripped from books, movies and even real-life developments. “We might find out you could electrocute a pickle, so we would wrap that around an electrocution story,” he says. “There’s no blueprint for how to do these episodes. You just come in with different angles and build the scenes around them.”

However, the show came in for some criticism for the levels of violence and sex it portrayed, pushing the boundaries of what was acceptable on a broadcast network, while real crime scene investigators commented on its unrealistic portrayal of their jobs. “We got a few things wrong, but everything we researched [for the show] is being used by someone in the country in law enforcement,” Zuiker says. “What we did was take a point of view that we had our hands on everything that could possibly be used to solve a crime. The majority of crime labs don’t have these facilities or these capabilities, but the technology and instrumentation is out there.

“A real CSI in Las Vegas is a super-boring job with limited abilities. You go to a crime scene, collect stuff and hand it in. You have no idea who the perpetrator is, how the crime got solved or if it ever got solved. In our show, we have to show the whole gambit. We have to show the crime, the interrogation, the process of the evidence, the arrest and the true story. Remember, we’re doing a television show, so we have to fill those gaps. We know where we made some modifications, but it was just for the purpose of telling a great story.”

Regardless, the viewers were sold and so were the bosses at CBS. The show quickly moved from its Friday launch slot to Thursdays at 21.00, “the most lucrative timeslot known to man,” says Zuiker. Then in mid-season, former CBS Television president Les Moonves called Zuiker into his office to discuss spin-offs.

“We thought we were going to get fired; we had no idea why he was calling us in,” he remembers. “The famous words were, ‘Pick a city.’ Then, Mr Bruckheimer, if I remember rightly, said Miami. The next day, we were flying first class with Ann Donoghue, my other partner, to Miami to do research and then we sat down with [NYPD Blue actor] David Caruso at Mr Chow in Beverly Hills.”

CSI: Miami debuted in 2002 starring Caruso and Emily Procter, followed by the Gary Sinise-fronted CSI: NY in 2004. They ran for 10 and nine seasons respectively, while a third-spin-off, CSI: Cyber ran for two seasons between 2015 and 2016.

With CSI’s Miami and NY editions both ending before the main series in 2015, Cyber proved to be a final roll of the dice for the heralded franchise, which is distributed by ViacomCBS Global Distribution Group, taking the series away from forensics and into the expanding world of cyber crime.

“If we didn’t do CSI: Cyber and did CSI: Chicago, for example, we probably thought that would be death [for the franchise],” Zuiker admits. “A fourth city, we’re just horse trading ideas at that point. We felt Cyber was the only chip to play because it was so relatively new. We had Patricia Arquette, who won the Oscar [for Boyhood], and Ted Danson, but we had audience exhaustion at that point and they were not buying the digital evidence of cyber crime. We lost the lustre of what makes CSI great, which is a real human body with a real piece of tangible evidence. That’s why the show ended with season two.”

One moment from the series that will live long with Zuiker is the season five finale, a two-parter called Grave Danger that was helmed by Pulp Fiction director Quentin Tarantino.

“I remember him saying he wanted to do a shot in the finale like he did in Kill Bill,” Zuiker remembers. “When he said that, we all took a pause and thought, ‘Quentin Tarantino is officially in our writers room.’ He walked in with a latte and just started spitballing ideas, and he broke a two-hour finale within three-and-a-half hours right in front of our face, right off the top of his head. It was quite magical.

“He’s one of the greatest filmmakers of our time. You’ll never get him to do a CSI again. That was a moment in time when he was just a fan. He didn’t set out to make the best CSI ever, just to do what he does in the genre. I got into the business because of Pulp Fiction and Swingers, and for him to do the finale was quite a nice 360 experience.”

Meanwhile, plans for an event series to mark CSI’s 20th anniversary were put on hold by the pandemic. But with more than 300 episodes airing over 15 seasons, plus three spin-off series, books and video games, the franchise is assured of a place in TV history. And for many networks around the world, it’s still very much part of the present too.

“All I ever wanted as an only child from Las Vegas was to do something special,” says Zuiker, who is now working on a slate of scripted and unscripted series and also runs publishing label Zuiker Press. “We’ve done that with CSI. Everything else I do beyond that is just gravy. Everybody [involved] has gone on, that Hollywood is gone too. It was a moment in time that will always be with us. We’re just thankful the shows are still doing well all over the world, and I hope they’ll be doing well for a long time. It’s a timeless show.”