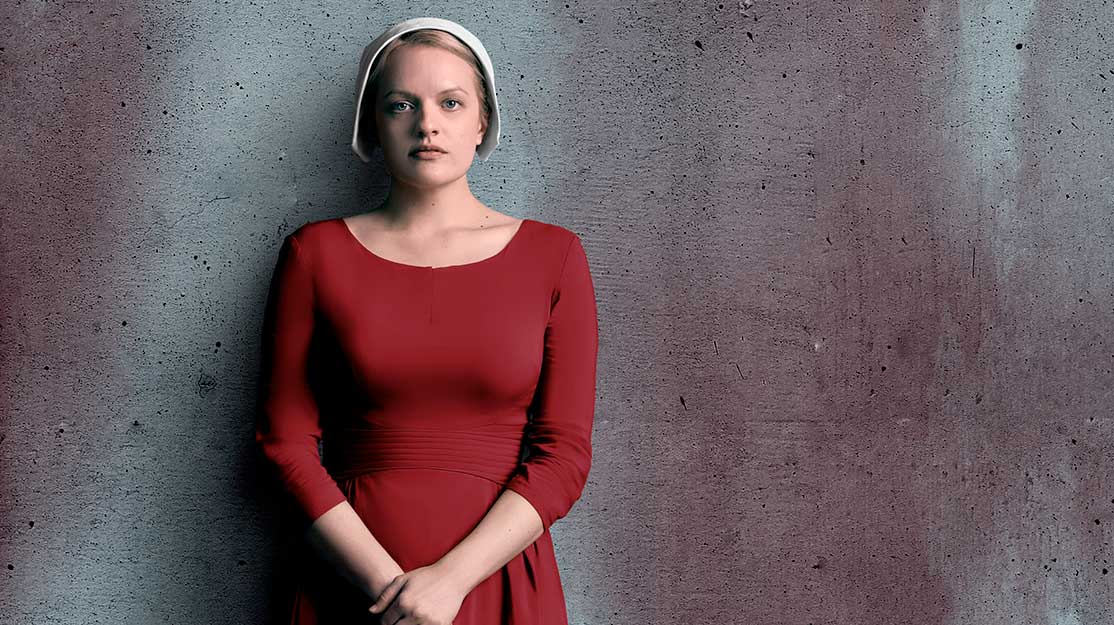 In the first instalment of a two-part feature, the cast of acclaimed dystopian epic The Handmaid’s Tale reflect on the challenges in store for the Hulu series’ hotly anticipated second season.

Praise be! The television breakout of 2017, Hulu’s dystopian drama The Handmaid’s Tale, returns to US screens next week for its second season.

Set in a post-apocalyptic US that has been violently commandeered by religious zealots, the MGM Studios-made show centres on the life of Offred (Elisabeth Moss, pictured above), a woman forced into sexual slavery as a child-bearing ‘Handmaid’ in the nightmarish society of Gilead, serving the corrupt Commander Waterford (Joseph Fiennes) and his wife Serena Joy (Yvonne Strahovski).

In spite of – or perhaps because of – its bleak tone, the show became an unexpected cultural reference point during the first year of Donald Trump’s presidency, with protesters across the country donning the show’s signature red robes to protest over women’s rights issues throughout the calendar year. Publications ranging from Time and The Nation to The New York Times and The Atlantic fell over themselves to write think pieces about the show’s relevancy and urgency.

The first season went on to sweep the board come awards season, winning eight Emmys, a trio of Critics Choice Awards and two Golden Globes, including the outstanding drama series prize at all three ceremonies. Adapted from the 1985 Margaret Atwood novel of the same name, The Handmaid’s Tale depleted most of the book’s source material in its first season, leaving showrunner Bruce Miller free to chart an original course for the sophomore outing, which lands on Hulu next Wednesday.

In the show, Offred seeks to flee the ruins of the US for refugee safe haven of Canada, which – perhaps fittingly or perhaps ironically – is where the American series is filmed.

On a cold and rainy day in late February, DQ travelled an hour or so from Toronto to the town of Hamilton, Ontario, to observe filming of the ninth and 10th episodes of the second season’s 13-episode run. “We have shot outside in the winter and I look at the Canadians, who look as if it is a spring day; they never look cold and they never complain about the weather,” says actor Ann Dowd. “Meanwhile, the Americans are huddled in a corner, begging for their lives.”

Dowd won an Emmy and was nominated for a Golden Globe for her performance as the villainous Aunt Lydia in the drama’s first season. Commuting from her home in New York for the eight-month Ontario shoot, she jokes that she finds the Canadians’ imperviousness to cold weather “deeply annoying.”

In returning to a character as cruel as Aunt Lydia, who is in charge of the Handmaids, Dowd notes that “you have to step away from judgement” and embrace the role in full. “To come to know a character well is like a friendship or a relationship,” she says. “If there is judgement, there is only so far you are going to get.

“I can understand from the outside that Lydia could be called an evil character, certainly a dark character, but I think from her perspective – and, therefore, from my perspective – she believes she is doing the only thing that will keep those girls alive in this world. As far as Lydia is concerned, I don’t think she sees any other way to get it through to them. She is a big believer in ‘spare the rod, spoil the child.’”

Dowd acknowledges the show returns to screens with a weight of hype and anticipation that wasn’t present when it launched. The success of season one has been transformative for Hulu, demonstrating that it can compete as a premium drama network in much the same way that Mad Men did for AMC, or House of Cards for Netflix.

“What a wonderful problem to have,” she reflects. “The great thing about the work in this business is that they are 15-hour days. I say great, even if it brings me to my knees, because the chatter, the publicity, the awards, the award shows… all of that falls away when you are doing the work.

“Plus, I am 62 now. Can I just say that age is underrated? Because after a while, all of that chatter falls away and you realise you don’t have to pay attention to anything at all except what is in front of you today, and today I am going to tackle a scene which is very challenging.”

During DQ’s visit, the cast and crew are filming at a beautiful, ivy-coated, three-storey heritage building in rural Hamilton. Familiar to viewers as the home of the Waterfords, the Bankier House – which dates back to 1893 and takes its name from its original owner, lawyer Patrick Bankier – is doubling for a fictitious residence in Boston.

Returning from a disastrous trip, the episode sees Commander Waterford and Serena Joy, portrayed by Fiennes and Strahovski respectively, ascending a staircase and wearily retiring to their separate bedrooms. It’s 18.30 as the first take starts, and filming will continue until midnight.

During a break from shooting, Strahovski tells DQ that her character’s relationship with Moss’s Offred “ebbs and flows in more dramatic ways” and “has become even more complicated” in the second season.

“It just seems to be a bit of a rollercoaster journey in that particular relationship, which is so interesting for me because it was already so heavy and guarded, and there was so much envy and frustration and anger towards her,” she says of her character’s feelings about Offred.

During the first season, critics were quick to draw comparisons between the powerful Joy and some of the most prominent women in the Trump administration, such as Melania and Ivanka Trump and Kellyanne Conway.

“A lot of people saw parallels, and I don’t blame them at all,” Strahovski says. “Our show is incredibly relatable and potent right now because of Trump’s America and everything that’s going on with women’s rights, all the new stuff that’s arising. But we became accidentally aligned with that, because we started shooting the show well before the presidential election.

“As with any character, I approached this one the same way, in that I stripped away all the judgements you can place on Serena. Having read the book, I see she is bitchy, but once you strip all of that away and realise she is a woman who doesn’t have any trust or faith in her husband anymore, in her marriage, she doesn’t have any intimacy with her husband, those raw emotions were my springboard into shaping her further… connecting with her emotionally and finding that humanity in her.”

The Australian-born Strahovski adds: “I don’t think anyone, ultimately, thought this was going to have such a massive impact, and that this show was going to become a show of resistance, particularly the ‘Handmaid’ red outfit. It’s incredible to be part of this positive movement where we are getting to talk more freely and more openly about women’s issues.”

British actor Max Minghella, who plays the shadowy Nick, the Waterfords’ driver and Offred’s love interest, echoes her sentiment. Having initially signed on for just a minor part in the show’s pilot, Minghella takes on a significantly expanded role in season two.

“It’s been a fascinating thing to be a part of something that actually has become relevant in a way none of us anticipated, predicated or necessarily intended,” he says. “The fact that we have become a part of a bigger conversation is kind of remarkable.”

In returning to the show, “I was nervous there might be some kind of shift in tonality on the set,” he says, “but there isn’t at all; everyone’s very work-focused. It’s an ambitious thing to try to continue the story beyond Margaret’s book, which is astonishing, but to have her hand in it – to have her blessing – I think gives us the confidence to keep telling the story.

“And certainly, from what I’ve seen and what I’ve read, I think it is stronger than last year. It feels more cinematic to me, it feels richer. There is an artistry to it which I think we are all craving more and more in this media.”

Indeed, the cinematic quality has been a source of recurring praise for the US streaming service’s breakout hit, offering further evidence of the oft-discussed crumbling barrier between television and cinema.

“The whole of television, the whole platform has shifted into new, exciting territory with budget, talent and production value, and with writers that have come from cinema,” says Fiennes, who earned a Bafta nomination earlier in his career for his role in 1998’s Shakespeare in Love. “I think this is the television golden age and you really feel that in this production.”

Reflecting on his character, Commander Fred Waterford, Fiennes says that “like many men in positions of great power, who believe they are untouchable and who think they can get away with things, he breaks the rules. And I think this is something we see all the time in that area of authority; it’s very human.”

He also acknowledges that his role has taken on a particular resonance in the age of #MeToo and #TimesUp, with his character standing in for the many men who use their powerful positions to abuse women.

“Before Harvey Weinstein there was Roger Ailes at the Fox News network, and there are many white men in big positions of power,” Fiennes reflects. “We see it. It’s right the way through history, and when the book [The Handmaid’s Tale] was conceived and written, it was happening then.

“Every day you are reminded of regimes, theocracies and patriarchal rulers, that is what is really startling to me. And they are all human, they are all fallible. I think a lot of it is to do with repression; you give a person with deep repression great power and you are in danger of creating someone like Fred,” he adds. “That is maybe a simplistic breakdown, but I am fascinated by that. There is a benign ineptitude that he is aware of, but he has been given a desk and he’s been given a power position.”

As for the show’s storyline now that the events of the book have been expended and the story is heading off-piste, Fiennes offers enthusiasm. The second season promises to expand upon the world established in the first, showing life in the toxic ‘colonies,’ the free country of Canada and using a flashbacks to explain how Gilead came to be.

“It’s rather like doing a great classical play, where someone in the front row has got the book and is muttering the soliloquies along with you,” he remarks. “Now they can’t. They are forced to enjoy a new narrative, so there is a departure. I think it is 100% authentic to the book and to the first season – darker and creepier in many respects, but still authentic.

“It liberates everyone to a point of just enjoying the narrative for the first time; that’s what is really special.”

Stay tuned for the second part of this feature, which will include interviews with showrunner Bruce Miller, director Jeremy Podeswa and DOP Colin Watkinson.