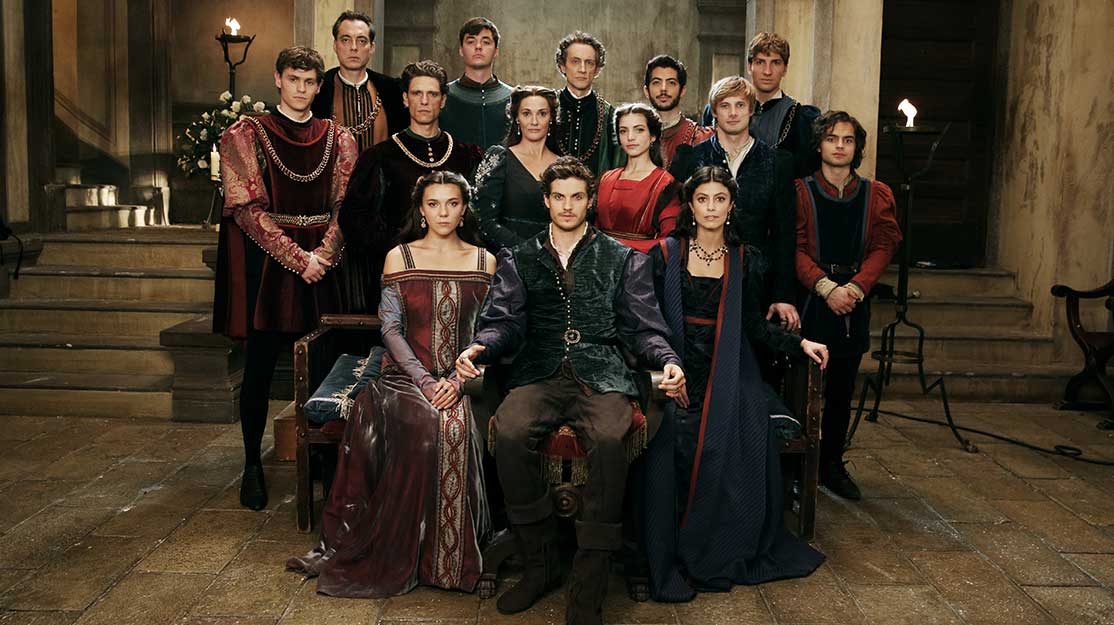 The cast and crew of Medici: Lorenzo the Magnificent reunited in Florence for the launch of this luxurious historical drama. DQ travelled to Italy to hear more about the series.

In the heart of the historic city of Florence, tourists and sightseers fill the walkways and pavements along Via Camillo Cavour, a bustling street that begins next to the Piazza San Marco and the grand church that overlooks the square.

There is particular excitement outside Cinema La Compagnia, where a black minibus has just pulled up. As the doors open, screams can be heard and flashbulbs pop as the stars of Medici: Lorenzo the Magnificent climb out and make their way into the venue for the official launch of the series.

Produced by Lux Vide in partnership with Italian broadcaster Rai, Big Light Productions and Altice Group, this is the second instalment in the Medici television series, following 2016’s Medici: Masters of Florence.

That first season ended with the birth of Lorenzo and now 20 years later, in 1469, the young man played by Daniel Sharman (Fear the Walking Dead) is obliged to take charge of the family’s powerful banking empire. Under his leadership, his family’s power in Florence increases while his enlightened views lead him to support artists such as Botticelli and Poliziano – putting him at odds with hated rivals the Pazzi family and even Pope Sixtus IV. Season two climaxes with the famous Pazzi conspiracy, in which Lorenzo and his brother Giuliano are the targets of an assassination attempt.

Filming took place in 30 locations across Tuscany, Lazio and Lombardy, including Volterra, the cathedral and the Palazzo Contucci in Montepulciano, and the cathedral and the Palazzo Piccolomini in Pienza. The costumes were once again designed by Alessandro Lai, who has created vibrant outfits that matched those of the Renaissance but did not restrict the performances of the actors wearing them. Around 5,000 items were made especially for the drama, with designers including Antonio Riva, Fendi, Rubelli and Tirelli also providing dresses, materials and clothing.

Along with the upcoming HBO coproduction My Brilliant Friend and other projects, Medici is at the heart of Rai’s focus on high-end English-language dramas that tell Italian stories for a worldwide audience.

With a third season of Medici already in production, focusing on the second half of Lorenzo’s life, Rai Fiction director Eleonora Andreatta says her intention is to showcase Italian history and culture on a global scale, with Medici imagined in the same way as a great historical novel.

“In the Medici production we see the best of what an international perspective can offer with unique Italian talents,” Andreatta says. “The Magnificent is Lorenzo, a young man who makes a great cultural and political revolution in his time, and that is the very embodiment of the Renaissance. Our narrative challenge was to tell this story through contemporary audience sensibility.

“This series is part of the mission of Rai as a big European public broadcasting service, a project of strong Italian identity and, at the same time, international. Frank, with Lux Vide, gave a fundamental contribution in creating a project in which each artistic choice – from the director to the cast, from the editing to the soundtrack – is of an international standing.”

The story of Lorenzo reveals a young man born in privilege who determines that, given the advantages with which he was raised, he can make a better world, Spotnitz explains. “So he’s enormously intelligent, enormously capable and very idealistic. It’s the young generation seeking to change the established order, which is not easy.”

Standing in Lorenzo’s way is Jacopo Pazzi, played by Sean Bean, who represents the established order – one that is determined to crush Lorenzo’s idealism. “That was a story we felt had resonance for a modern audience,” Spotnitz continues. “You can look at the story of Lorenzo as we’ve told it in two chapters: this first season is the first chapter, ending in the Pazzi conspiracy, which is a searing defeat for Lorenzo; then the second season is about how Lorenzo recovers and goes on now that his idealism has been destroyed. So we felt it’s a very moving and meaningful story about the 15th century but also about today.”

“It wasn’t hard to be a mother to these two beautiful boys,” says Parish of working with Sharman and James. “It was a real honour to play Lucrezia because really, from my point of view, she was a feminist in a way – one of the first feminists in Renaissance times. She wrote poetry and plays, she was an amazing artist. To have all those talents in that day and age was quite incredible for a woman, so it was a real honour to play the part.”

The female characters play a hugely important role in the series, which shows the power they wield through their relationships with the male characters.

Karslen notes that Clarice comes into Lorenzo’s life and becomes the matriarch of the family, with Lucrezia still a driving force behind the scenes. “Jon said to me when we first started, ‘These men would be nothing without the women they have.’ Lucrezia is the brains behind so much of it, but the person who can act on it is Lorenzo,” she says. “That’s not just because he’s a man but because Lorenzo was extremely capable and talented. That’s what this series does really well. It brings the importance of these women and those relationships to the front of the show.”

Before shooting began last year, Sharman had asked the producers if he could arrive two weeks early. He used the time to lose himself in Tuscany, exploring the places where the real Lorenzo lived and worked.

“It’s something I wanted to do because the work that everybody has put in on this is incredibly detailed. It’s actually a pleasure to come to work because the actors you get to act with on this, the production, the costumes, the level of detail that’s gone into it is truly astounding. You want to do justice to this piece,” Sharman says. “But at some point you have to throw that all away and find the very human element in it that I can relate to, which is that this is a person who’s been groomed for power, who isn’t sure if he’s even good enough, who isn’t sure if he understands enough, which I relate to very much in terms of growing up as an actor. You’re always concerned with whether you’re good enough or whether something works.

“So, weirdly, the character and you kind of align in saying, ‘I don’t know if I can do this character or this person justice,’ just as Lorenzo doesn’t know if he can take on something as daunting as lifting Florence out of an extremely difficult situation. Then you just rely on people around you – the amazing directors we have had, the actors you get to work with – and it’s really your job to let it go and let your vulnerabilities show.”

Streaming platform Rai Play launched the series on October 16, with its debut on Rai Uno set for October 23. Netflix is expected to roll out the series in English-speaking territories in early January. Distributor Beta Film also screened the first episode to international buyers this week at Mipcom in Cannes.

Meanwhile, the success of Medici season one, which starred Dustin Hoffman and Richard Madden, has also seen Rai partner with Lux Vide to produce more series about the Renaissance.

Following the official launch, the cast and crew gathered further along Via Camillo Camour at Palazzo Medici Riccardo, an ornate 15th century palace designed for the Medici family. On the first floor, overlooking a grand courtyard, costumes from the series are displayed in rooms covered with numerous works of art.

It’s here that British actor Bean, who won a Bafta earlier this year for his role in BBC drama Broken, says it was “refreshing” to appear in the historical drama, noting his own interest in the Renaissance period. “It wasn’t like working in that sense because it was actually a hugely enjoyable experience,” he says. “I didn’t really know a lot [about the Medicis]. I did read quite a lot about the family ties and lineage but, after that, it’s a matter of getting on set and saying the lines.”

Rather than playing real-life characters in a docudrama or biopic, Bean says he was given room to invent the character of Jacopo, admitting he had a lot of fun playing someone who was amused by creating chaos and then exploiting it for his own opportunism.

“It’s like Lord of the Rings,” recalls the actor, who played Boromir in Peter Jackson’s big-screen trilogy. “There was hardly any character description in Lord of the Rings, least of all Boromir. It just said he wears this crimson top and a blue thing and I thought, ‘Fuck, is that it?’ You do as much as you want really for this and it’s exciting. If it’s a drudge, it’s pointless. It’s like when you’re at school doing history; it was a drudge because you couldn’t picture anything and it didn’t make much sense. Something like this brings the characters to life.”

Jacopo relishes his position as a bad guy, Bean adds. “But first and foremost he’s pragmatic, realistic. He’s very black and white but, on his journey to achieve power, there’s a lot of fun and games to be had on the way.”