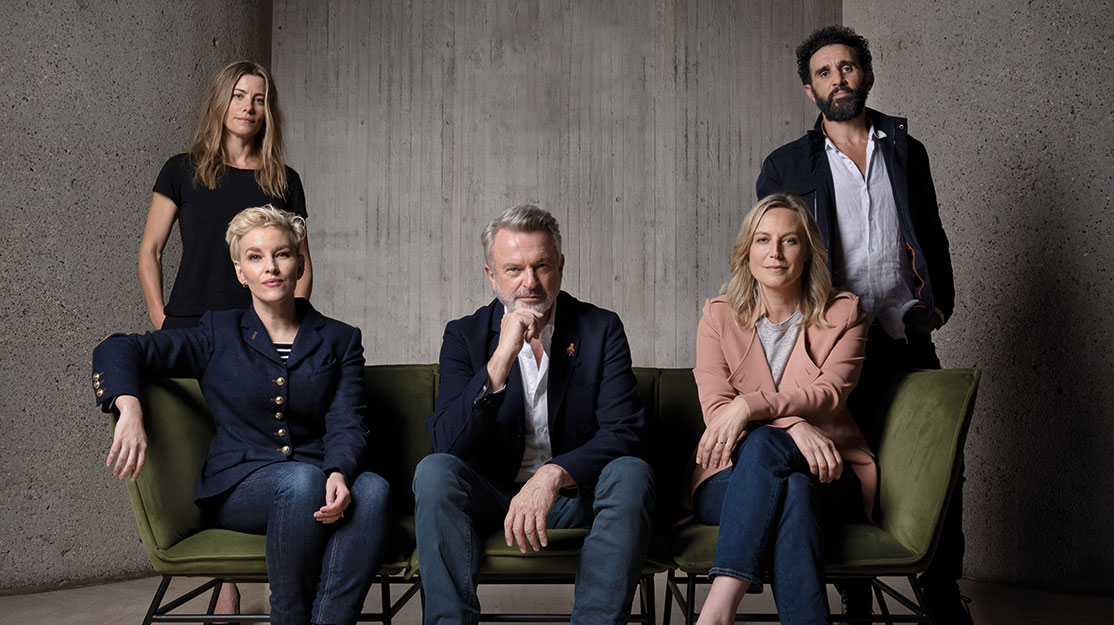 The creative team behind Australian drama The Twelve reveal how a Flemish-language series inspired this exploration of the dynamics and relationships between strangers brought together to determine a criminal trial.

While Sam Neill will once again be sharing the screen with dinosaurs this year in Jurassic World Dominion, the star is also returning to Australian television for the first time in several years as part of the huge ensemble cast of courtroom drama The Twelve.

Based on Belgian series De Twaalf, the show also stars Kate Mulvany (Fighting Season) and Marta Dusseldorp (A Place to Call Home). It follows 12 jurors, each dealing with their own struggles, who together must decide the case of a woman accused of killing a child.

When DQ speaks to the creative team behind the Foxtel series, filming is underway on the third of five blocks as production moves sequentially through the 10-part drama ahead of an expected premiere later this year.

Hamish Lewis, head of scripted at Warner Bros International Television Production Australia, first came across De Twaalf through WB-owned Eyeworks Belgium, which produced the Flemish-language series. He was immediately struck by its original premise, offering a character study of 12 strangers against the backdrop of a murder mystery, and thought it was perfect for an English-language adaptation.

He quickly took the idea to executives at pay TV broadcaster Foxtel, pitching a series that would stick closely to the established premise but use the jury members to tell important and timely stories for an Australian audience. Within 24 hours, the broadcaster was on board and head writer Sarah Walker (The Secrets She Keeps) was assembling a writers room.

“We were very much aware there were lots of storylines that worked very well in the original, and they translated beautifully. It’s very relatable,” she says. “They’re all universal stories – a woman who has a coercive, controlling husband; a man dealing with an accident on his worksite. There were many parts we felt were working so well that we didn’t want to trample on those, but we’ve Australianised it. We did swap and change some characteristics, but there was a real intention in the room to protect what was working.”

Ian Collie (Rake, Jack Irish), founder of coproducer Easy Tiger, joined the project later. A former jury member himself, he brought his own fascination with the criminal justice system to a series that attempts to lift the veil of secrecy that hides exactly what goes on in the jury room. “The jury is one of the last institutions we know so little about because the media can’t report what goes on inside that meeting room,” he says. “It’s great for us writers and producers to tell it as we see it. It’s an exciting project.”

All the jurors will have their moment in the spotlight, Walker promises, with viewers gradually learning more about each character and how their personal lives may impact their thoughts about the case. “We allow the characters to organically emerge within their own episodes where it feels right,” she notes. “That sometimes includes the witness on the stand, who that day may be more pertinent or relevant to the story issue one of the jurors is going through. Then we would just lean into that theme a little bit more.”

The differences between Belgian and Australian legal systems, particularly in terms of access to and anonymity restrictions around the jury, also had an impact on the adaptation, as a journalist character in De Twaalf had to be changed.

“One of the other big stumbling blocks we came across – thanks to Ian and his legal brain – is that, unlike in Belgium, here you don’t put the defendant on the stand until the very end,” Walker says. “That was a very important part of it in terms of structure of the Belgian series, where you heard from the central character straightaway. Then you could make a decision about what you thought about her from that point, whereas here you can’t hear from that central character on the stand until the very end. It was very different structurally in that way as well.”

“Kate has her day in court at the end,” Collie reveals of defendant Kate Lawson, played by Mulvany. “She doesn’t have to but, in this case, she decides to give evidence, which occasionally happens. We try to get it where the barometer keeps flip-flopping between whether the jury and the armchair jurors – the viewers – think she’s guilty or not guilty, and hopefully that’s where we’re successful. You just don’t know if she did it or not. The best courtroom dramas are ones where you’re really unsure.”

“We have very well-known, very well-respected actors in the leads of the crime story but then we have these 12 new actors who are fairly fresh to the screen, which makes it feel like they’re strangers,” Walker says.

Lewis picks up: “It’s the perfect format to play with a mix of really high-profile talent and explore fresh faces. It’s been a big casting process, but Sam, Kate and Marta set a really solid benchmark for the rest to aim for.”

Collie, who previously worked with Neill and Dusseldorp on Rake and Jack Irish, respectively, says many of the cast members had also seen De Twaalf.  “In the hands of gifted writers like Sarah and good directors headed by Daniel Nettheim [The Tourist, Line of Duty], it’s a good package to attract some of our top cast,” he adds. “In the end, it’s a project and a story with so many layers. That’s what’s so attractive about it.”

The show is set and filmed in Sydney, where the courtroom and jury room were among built sets created at the city’s old ABC Studios, while the production sought to reflect the diversity of the jury by filming parts of Sydney not often seen on screen. Moving the action from Belgium to Australia also brought a sunnier outlook compared with the often bleaker backdrops of European noir.

Though fans may wish to seek out the original series, Lewis says the premise at the heart of The Twelve offered the chance to tell an entirely original crime story through the eyes of 12 random strangers while tapping into timely themes affecting contemporary Australian society. “It just felt like something that could be really easily translatable, with a great platform to tell some exciting stories,” he says.

Distributed by Endeavor Content, The Twelve is set to wrap production in April ahead of its launch on Foxtel later this year. Walker believes the show stands out for the way it highlights how personal prejudices among the jury members affect their ability to judge others.

“We’re all human beings, we’re all fallible,” she says. “It’s an interesting thing when you’re actually looking at the people who are judging someone else for doing something wrong, but they’re not making great decisions in their own lives either. That’s just a lovely, delicious dilemma for the characters. As a writer, you can’t ask for anything more than that.”