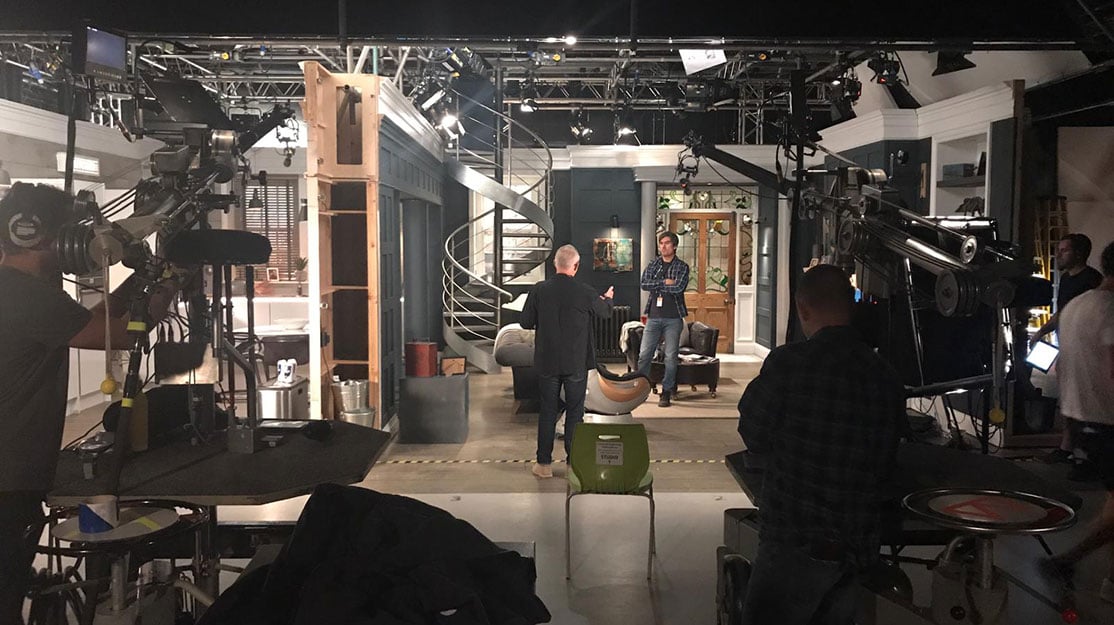 When Emmerdale was named the winner of the continuing drama category at last month’s socially distanced Bafta Television Awards, executive producer Jane Hudson was surprised and delighted as she joined the post-event press conference. A week later as she speaks to DQ from the show’s Yorkshire studio, she’s still “chuffed to bits.”

But this year of all years, as soaps were the first television series in the UK to resume production amid the pandemic, Hudson firmly believes Emmerdale and its traditional rivals – Coronation Street, EastEnders and others – all deserve a share of the limelight.

“It is fantastic to win it, I just think all of us deserve an award,” she says. “The soaps were the first to return to shooting. We never get recognition. We’re always the poor relation of drama in other people’s eyes. We’ve just shown that we’re not. We know what we’re doing. We can produce really great drama under really difficult circumstances. All the dramas should have got a big fat award just for working.”

Originally known as Emmerdale Farm, the soap has been a fixture of ITV’s evening schedules since 1972, steadily growing from two episodes a week to six. Set in a fictional village in the beautiful Yorkshire Dales, it follows the joys and heartbreaks of the families living in a tight-knit community. Some of its most notable characters include the Dingles, Tates and Sudgens, who are all regulars at the Woolpack pub.

Hudson joined the series as executive producer in June 2018, having worked as an ITV commissioner for its soaps until summer 2017. The Bafta win recognises Emmerdale’s performance in 2019, during which Hudson oversaw the show’s Big Night Out storyline. Several characters went on a group night out that went horribly wrong, leaving many questions unanswered until a fortnight later when three flashback episodes revealed what really happened.

“One thing we try to do is be innovative with what we’re doing but always remember what the essence of soap is and what our genre is,” she explains. “You can take the viewers so far but, if you try something too extreme, you’re trying to be a nine o’clock drama. We’re not, we’re a soap and you’ve got to remember that.

“Our Big Night Out week was a really interesting way to tease the audience, to let them know something had happened and then to reveal what happened but keeping within the truth of our soap. We didn’t try to become something different.

“We also submitted [to Bafta] our Nate/Cain/Moira boat explosion. It’s not just a great big stunt, it was also these three characters finding out this massive secret that not only has Moira been sleeping with Nate, but he is her husband’s son. It’s a huge thing to get your head around. We showed not only can we do stunts, we can be creative with our storytelling and do what is at the heart of soap: characters finding things out.”

Soaps should mirror viewers’ lives, Hudson says, only in a very exaggerated way as their characters deal with everyday events including affairs, babies being born, death, illness, arguments, secrets and lies. Viewers also grow to love the characters, often seeing more of them than their own family.

“You’ve got to take them on a journey. And when we get our characters to quite heightened states, we lead our audience there,” she continues. “We’ve got longevity too. We’re not just on for six episodes; we’re on, hopefully, forever so you’ve got to keep some truth to those characters and keep your audience with you. We’re pre-watershed as well, so we have to be really careful at telling big, emotional, impactful stories while keeping within the pre-watershed rules.”

The 40-strong band of writers and executives who collaborate on the show’s storylines “argue, fight, laugh and joke” as they come up with ideas they hope will get the nation talking, ensuring viewers are fully invested in characters and their relationships before dropping nerve-shattering revelations or pulling them into emotional, hard-hitting events.

“Sometimes there’s an urge to plough through stories and it all becomes very heightened. But we’re always looking to make sure, tonally, we have some big things happening – we’ve got some comedy, there’s a more schlocky story happening and then a really serious, heart-and-soul issue story,” Hudson explains. “We’re always looking for that balance so that it feels like a very colourful world, which is what most people’s worlds are like.”

Reflecting real life has never been more important than it is today, as soaps look for a way to reflect how people are living with Covid-19 while also trying to offer them a form of escapism. Filming on Emmerdale and its ITV Studios cousin Coronation Street was suspended on March 23, with Emmerdale’s weekly six-episode broadcast schedule reduced to three at the end of that month.

However, cast and crew returned to work on May 20, initially to film six special lockdown episodes featuring six different groups of characters. These were broadcast two per week through June, before the regular series returned to three weekly episodes in July. The reduced transmission and the ability to resume filming so quickly meant Emmerdale avoided running out of episodes and has continued to air throughout the pandemic. Back on set, Hudson is facing up to the realities of filming in a post-Covid world and how that is reflected by the characters on screen.

“What all the soaps are trying to do at the moment is find that happy medium, which shows we’re acknowledging the world as it is now and we’re acknowledging coronavirus, but also we’re taking a bit of dramatic licence and saying, ‘Look, if we’ve got a police interview scene and it’s emotional, do our viewers really want to see our characters sat in masks?’

“We’ve got to remember we are a form of escapism as well, as much as we reflect real life. The pub and the café are takeaway venues at the moment and now we’re just debating whether they can be eat-in venues and, if they are, do we have to wear masks? Honestly, I’d like to say it’s not a daily conversation, but it is.

“We’re trying not to look like we’re ignoring coronavirus but we’re trying not to let it take over our show. It’s taken over enough of our lives as it is without interfering with our beloved characters too much. If you’ve got somebody finding out somebody’s had an affair, in all likelihood your first thought isn’t going to be, ‘I need to put my mask on to confront them.’ It’s going to be, ‘I’m going to rip their bloody beak off.’ We’ve got to have a bit of reality where putting a mask on might not always be your first thought.”

Hudson recalls her surprise at how coronavirus rapidly moved from being the final item on the evening news to suddenly affecting everyone’s lives, leading to production being suspended in March and people being stuck at home in lockdown. She admits her biggest fear was running out of episodes, but her priority now is ensuring the cast and crew are kept safe.

“Nothing comes before our safety,” she says. “We’re so strict. I never thought I would be such a headmistress about safety in my life.” She has spoken to her counterparts at Corrie, as well people working on BBC soap EastEnders, Channel 4’s Hollyoaks, Australia’s Neighbours and New Zealand’s Shortland Street. Hudson and Emmerdale’s senior production manager, Nader Mabadi, have also discussed new filming practices with independent production companies more used to making high-end dramas.

“It’s been a real marker of how small our industry is and how, when we need to work together, it’s like, forget the ratings battle for a moment and take the gloves off. We can help each other and, when we’re back up and running, we can put the gloves back on and have a fair fight. But right now, let’s just get each other working. Most of my friends are in this industry and they’re just out of work. It’s heartbreaking.”

Everyone working on Emmerdale now has a coloured lanyard denoting which area of the studios they are allowed to enter. People allocated to different areas can meet in the car park for socially distanced chats. Filming resumed with a very light schedule, with fewer actors and scenes in each episode. This meant cast members suddenly had to learn eight-page two-handers, rather than four-page six-handers. But as production slowly increases, the show is on track to resume its original six-episode weekly broadcast patten as part of ITV’s autumn schedule next month.

Hudson says the key to filming in the post-coronavirus world is to work within health and safety rules, rather than try to get around them. “As soon as you get into your head that this is how it is and we have to accept we have to do all these things, you find a way to work,” she says.

“Our two-metre social distancing pole is basically a bit of painted wood. It’s the cheapest bit of kit ever and now we physically hold a pole between people. We have markings around the whole building, like in shops. You can’t move for hand sanitiser, it’s everywhere. We have temperature checking when we come in. We have a medic with us all the time. If anybody wants to see what health and safety is, just come to our building. It’s crazy.”

As a former soaps commissioner for ITV, Hudson says she has always loved Emmerdale. Hailing from Yorkshire herself, Hudson admits “I’m going to be biased anyway,” but says the show’s Bafta win is recognition for the soap’s ambition and innovation.

“We try to find a new way to tell a story but one that makes you feel like you’re still watching Emmerdale,” she says. “You’ve not suddenly jumped into [BBC crime thriller] Line of Duty. You are true to your genre, you know exactly where you are but you’re being surprised by the storytelling in a way you enjoy.

“That’s what worked for us this time. It’s a very lovely place to work, and that’s been shown by our return to filming. The commitment, loyalty and enthusiasm from our cast and crew and our different teams has been phenomenal. I couldn’t be prouder of them.”