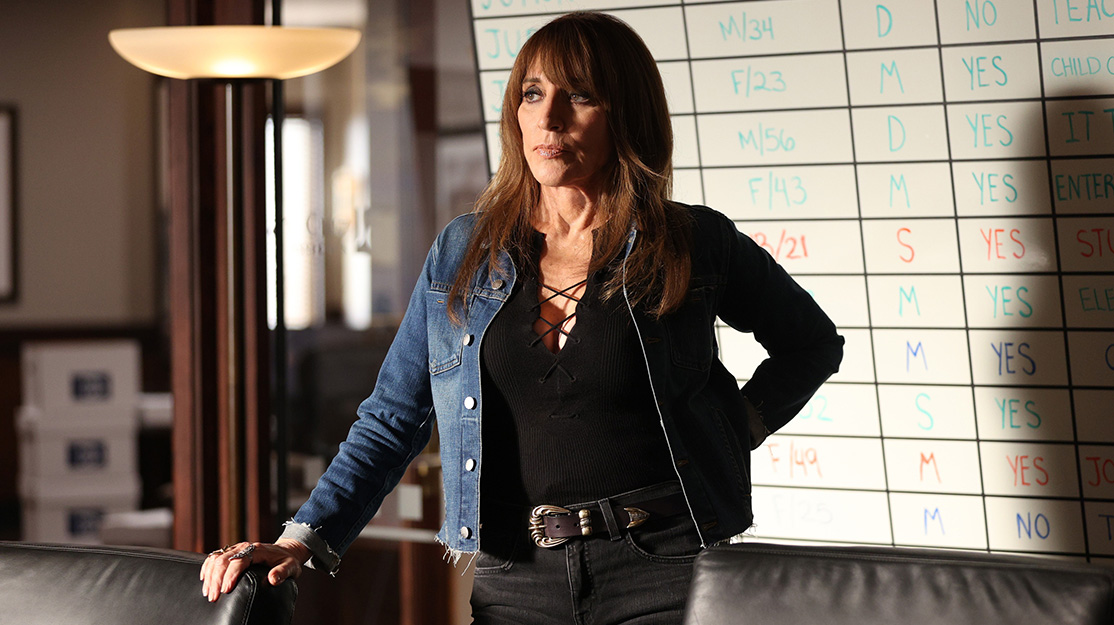 In 2000, the life and work of Erin Brockovich, an unemployed single mother who took on a power company involved in the contamination of a town’s water supply, was turned into an Oscar-winning feature film starring Julia Roberts. Now a well-known consumer advocate and environmental activist, Brockovich has inspired a television series created by the showrunner of Grey’s Anatomy and Station 19.

Rebel, which launched on US network ABC in April and lands on Disney+ internationally under its Star banner today, follows Annie ‘Rebel’ Bello, a blue-collar legal advocate without a law degree. Described as a messy, brilliant and fearless woman, she cares desperately about the causes she fights for and the people she loves, willing to win at almost any cost.

The show’s season-long arc sees Rebel, played by Katey Sagal (Sons of Anarchy), taking on a medical company, while further episodes explore issues of clean water and corruption as the character also faces challenges in her personal life.

Produced by ABC Signature in association with Sony Pictures Television, the series comes from showrunner Krista Vernoff, who worked alongside executive producer Brockovich to model the series on the activist as she is today, rather than as she was in the original film.

“Working with Erin is a great privilege and a tremendous joy,” Vernoff tells DQ. “She’s just on fire. There’s no other way to really describe her. She has so much energy, so much drive and so much optimism despite what she sees every day – and that makes her really extraordinary.”

The Julia Roberts movie was a “hugely inspirational piece of entertainment,” she says, which came out during her first year working in Hollywood.

“It really defined so much of who I want to be and how I want to be in the world,” she says. “Erin in the movie was broke and she could barely keep a roof over her kids’ heads. Rebel, who is inspired by Erin today, is famous and comfortable. The primary difference is that she now has fame as a resource and she uses it as a resource. Where she goes, news cameras follow and she uses it to bring attention to causes in cases that need attention so it’s an added resource. But she’s still the person that she was 20 or 30 years ago.”

From the opening scene, Rebel is a ball of energy, confident and forthright, sitting at the centre of a series that is both dramatic and light-hearted. Vernon admits the series has a “very tricky tone,” with her task to create a show that tackles serious topics such as corporate neglect but would also be something people would want to come back to every week. The showrunner would even go on set to inform the cast and crew of when a scene would be scored with dramatic or light-hearted music to ensure that tone is not lost from page to screen.

“The key to that for me is levity – a family dynamic and a work dynamic that is simultaneously dramatic and funny and where the stakes are never forgotten,” she explains. “But there is humour and laugh-out-loud, funny moments in the interpersonal dynamics. This is one of the things I’ve gotten to practice working on Grey’s Anatomy from the beginning, where surgeons talk about their lives while saving lives. The tone of Rebel is even funnier and I’ve tipped it towards the even more absurd sometimes because of the characters and the situations that Rebel is working with.”

The emergence of more female-led series over the last few years has given rise to the label ‘strong female lead’ to discuss the characters fronting these shows, from Killing Eve and Big Little Lies to The Handmaid’s Tale, Orange is the New Black and GLOW. But like Rebel, the characters in these shows aren’t just strong. They are also flawed and human, and Vernoff believes Hollywood needs to move away from the idea of strong women as superwomen who don’t have faults.

“When you make a female character flawless, you strip her of her humanity and therefore she’s unattainable and, for me, she’s not inspiring,” she says. “I am often described as fearless because of the way that I go at issues, but the truth is I have a pretty severe anxiety disorder. I am not fearless. I am just brave. When we use words like fearless to describe people who are doing things that are brave, we eliminate the humanity in the effort. I don’t know a single fearless human being, not one. I don’t know anyone who doesn’t panic when they’re taking on complicated, frightening subject matter in a very public way, which is what you’re doing when you’re creating television. I’m comfortable with people describing my women as strong, but let them also be brave, funny, flawed, damaged and sometimes damaging to others, because that makes them a whole human being.”

On screen, Rebel features actors such as John Corbett, James Lesure, Lex Scott Davis, Tamala Jones, Ariela Barer, Kevin Zegers, Sam Palladio and Andy Garcia, but it was in casting the lead character that Vernoff thought she would have her “biggest fight,” as the showrunner was determined to cast an age-appropriate actor to play a figure inspired by Brockovich, who last year turned 60.

“I felt certain I was going to be submitted a list of 40-year-olds,” Vernoff says. “Then one of the producers I’m working with, John Fox, said, ‘Katey Sagal’ and I lit up. Then we called everybody all the way up Disney and there was no fight. It was such a big shock to me that we were allowed to cast someone age-appropriate without a fight, so that to me suggests there’s been progress in Hollywood.

“It also suggests the power of Katey Sagal’s career. She is known for playing flawed complicated women and she is simultaneously beloved. That is the combination that makes her the perfect Rebel. She’s going to be flawed and complicated and she’s going to have three different children with three different men. She’s going to be exhausting and she’s going to talk you into the ground. But at the end of the day, you like her and that’s one of the keys to Erin Brockovich. She has tremendous empathy and that’s a thing Erin and Katey have in common. It was just one of those really lucky moments where the actress you want is available and everyone agrees that she’s right. I also personally happen to have known Katey since I was a child, so that’s a really beautiful thing.”

While Vernoff’s showrunning style has had to evolve in order to steer three shows through production – going from micromanaging decisions to macro-managing – making Rebel in a pandemic threw up some expected challenges along the way. The pilot was ordered almost a year before it was shot, after Vernoff took the project through pre-production only for it to be shut down on the last day of prep.

“We were going to camera the next day, so then we all went home for six months and didn’t know if there was even going to be an industry, let alone a Rebel,” she says. “Then slowly but surely, everyone came to understand Covid better. The medical community did tremendous work very quickly because, around the globe, we were united in a common fear and a common cause. The entire medical community of the world worked together to come up with understandings of how this disease functioned at what was really lightning speed in the grand scheme of things.”

That information was then applied to television production, with regulations put in place for how long actors could stand in close contact with one another without wearing masks.

“As a showrunner, you’re creative, you’re a writer, you’ve grown up making TV and you’ve coalesced what you think are the best ideas into how you manage your teams – and then suddenly your entire day is spent on meetings with epidemiologists,” Vernoff says. “I’m not equipped for this, but thankfully a lot of people stepped up and everyone did it together as a community. And we managed to come back and make TV. I had the benefit of making Grey’s and Station 19 first, so those actors were largely masked on camera and then by the time Rebel was shooting, it was many months after we’d been shooting the other shows, so I had learnt a lot from those and was able to apply those things so Rebel can live in an imaginary post-pandemic world.”

Much to the surprise of viewers, ABC has already chosen not to renew Rebel for a second season, with the decision coming just five episodes into its 10-episode run, although the possibility remains that the show could resurface on another platform.

For new viewers now coming to the series, Vernoff hopes Rebel will give viewers something hopeful to enjoy as the “firecracker” title character storms into their lives.

“What I believe is that life is both funny and dramatic at all times,” she says. “That’s been my experience. I had the most painful moments of my life in the hospital while my dad was dying, followed almost immediately by some of the biggest laughs of my life because people need relief from pain and we will find humour in the absurdity of pain sometimes.

“My goal with this show is to do both – to honour the real pain that people are in and then to give them permission to laugh sometimes. Particularly right now, after this year we’ve all survived together, people are frustrated and feeling a fair amount of hopelessness and despair. This show, by design, is hopeful and suggests there is always something you can do in service of your greater good or the greater good.”