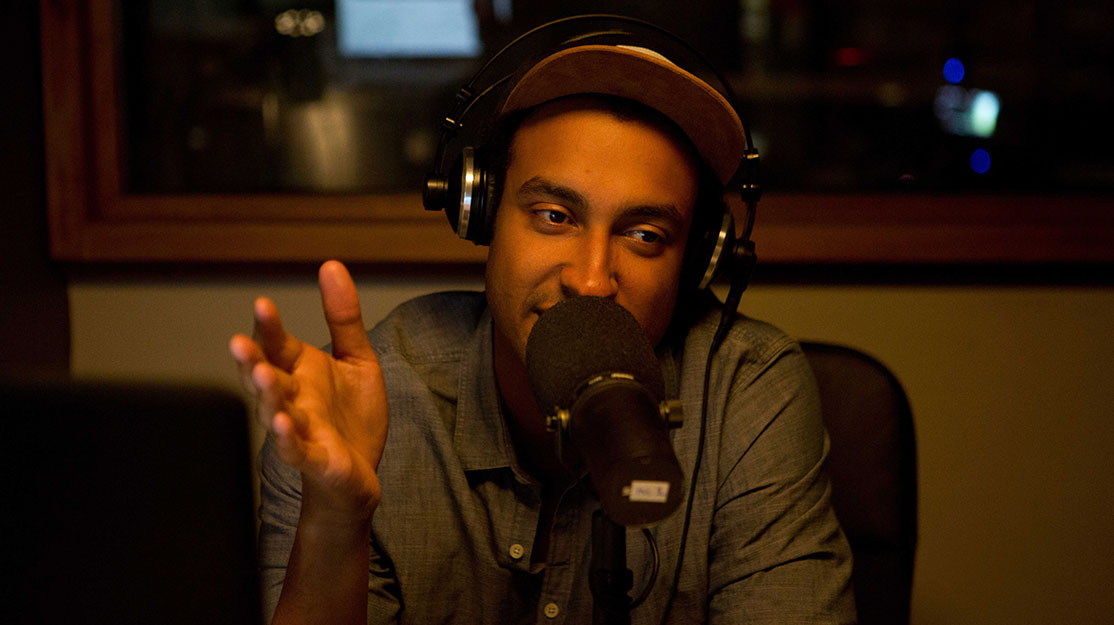 Matt Okine swaps stand-up for television as the creator of The Other Guy, the latest series to blur the boundaries between comedy and drama. Alongside co-star Valene Kane, he tells DQ about creating television with a dose of reality.

From Fleabag and Catastrophe to Girls, Transparent and Master of None, the boundary between comedy-drama and dramatic comedy has never been more blurred. These shows have perfected the art of making us laugh while grounding their stories in reality and throwing in plenty of deep and meaningful life lessons.

A new entry into this expanding genre is The Other Guy, created by stand-up comic and radio presenter Matt Okine and commissioned by Australian SVoD platform Stan. Described as a funny, raw and poignant look at breaking up in the digital age, it follows radio host AJ as he finds himself single after discovering his girlfriend has been having an affair with his best friend.

Okine (pictured above in The Other Guy) has co-written the series with Becky Lucas and also stars as AJ, opposite Valene Kane as ex-girlfriend Liv and Harriet Dyer as best friend Stevie. It is produced by Aquarius Films alongside distributor Entertainment One.

“It definitely rides that line between comedy and drama,” Okine tells DQ during a trip to London to perform on stage. “I never set out to make a gag-fest and I would say overall it has a very restrained kind of humour. I really didn’t want to try too hard and didn’t want to be making jokes for the sake of it, which I find is a real issue with a lot of things that I watch because it detracts from the believability of the characters. It frustrates me that people go for gags over substance a lot of the time. I really wanted to make a show that felt honest and knew when to hit back and throw the punches at the right time.”

The comic star says the show is far from a Matt Okine documentary, but admits there are elements that have happened in his own life. In particular, he drew on some of his own experiences for the premise of the series – AJ’s break-up with Liv. Perhaps unusually, however, he chose not to show the event that led to the split, instead setting the series several months later when the couple are still living together but dealing with the fallout of the betrayal.

“It’s a weird one – there’s an underlying frustration while you’re watching it because you want the characters to talk about the affair more, and you want them to fight and be frustrated and all these things, but that’s just not real,” Okine explains. “That’s just not how real life works. Everyone thinks they know how they’re going to react to an event like that where you find out your partner’s been cheating on you with your best friend. It would have been really easy to have a scene where my character walks in and finds them in bed and it’s this comic play out of the whole thing. But we find them in a completely different time, way past that event, way past the point of saying sorry. And those are the things I liked about it, that I wanted to feel the tension in those sorts of places instead of more of the tension around them actually fighting. You’ve got to choose your points of conflict for them to mean anything.”

The Other Guy was a lesson in writing for television for Okine, who is more used to the bright lights of a comedy club or the intimate setting of a radio studio. Working with Lucas and script producer Greg Walters, he says he learned a lot about how to craft a drama by building interesting characters and always second-guessing the direction of the script.

“We plotted it out for a couple of days in the writing room and then Becky and I would sit on my couch in my house and type away,” Okine recalls, adding that the toughest part of the process was writing the series while he was still presenting a breakfast radio show. “That almost killed me. It was really difficult getting up at 04.30 every morning, doing my radio show, leaving work at 12.00 and then writing until 19.00. There were certain times where I just didn’t think I would be able to do it.”

Starring opposite Okine, Kane is best known in Britain for emotionally demanding roles in crime drama The Fall and psychological thriller Thirteen, so a comedy was something of a new challenge for the Irish actor.

“I’m not that funny, either on screen or in real life, and Liv isn’t funny. She’s the honest heart of the story,” Kane says of her character. “I loved the writing. Matt and Becky wrote a truthful and honest depiction of break-ups and modern life for people in their 30s, which I hadn’t read. It just struck me like the kind of TV I’ve been enjoying, like Girls – a fucked-up but realistic portrayal of people in their 30s, which we don’t see really.”

That realism meant Kane had to play a character closer to her own personality than any she has portrayed on screen before. She describes that process as “weird and definitely difficult” in the beginning, so much so that she doubted her own acting ability.

“I remember calling my girlfriend and being like, ‘I can’t act, I don’t know what I’m doing,’” she says. “It was a really different muscle to do as little as possible while maintaining as being as real as I could. It was difficult.”

Okine’s biggest challenge could be found in the editing suite, however, as any dreams he might have had about sitting back sipping a margarita once filming was finished swiftly evaporated. Instead, he found himself in meetings discussing whether international audiences might understand the word ‘pokies’ (an Australian term for slot machines), or if a shot of one character looking at another that might infer romantic intentions, with no alternative selections available.

“I had no idea how much crafting still happens in the editing process and how important my input would be at that stage,” he admits. “So for the first few days after we shot, I had a meltdown. I felt like I had been running an 800-metre race and I’d sprinted the first lap and forgotten there was another lap to go and I was exhausted. That was something that really threw me for that first week. I don’t think I was as on top of my game as I should have been.”

One thing that was particularly important to Okine was casting, as he sought to piece together a diverse group of actors he wishes he had seen on screen when he was growing up. “I am really proud to have a show I could have watched 10 or 20 years ago and felt represented on screen,” he adds. “But I don’t want to think this show is this purely because I’m half-African. That would be underselling what we’ve created.

“We cast who was best at the time but definitely in the writing process I wrote a lot of those ethnicities into the show, right down from the first scene where there’s an Indigenous Uber driver. We’re not trying to make huge political statements by having brown people on screen or having more women involved as characters who aren’t sexually driven. We just wanted to make a different show, something that was pure.”

That The Other Guy was made for Stan also played on Okine’s mind, as the six episodes in season one run to three hours in total, less than some feature films. The Australian says he’s satisfied that some people have chosen to watch the entire series in one sitting: “I’m really excited by that because it’s a show that does build. It doesn’t start off with a bang and drip away as the ideas fall off. It reaches a high point later on in the series. It was good to know people could immediately watch that next episode and get some momentum going.

“Also, the fact it’s on a streaming service and wasn’t relying on advertisements meant what we lacked in budget, we made up for with freedom. Stan was so supportive. You can tell everyone is really excited about how quickly the company is building and it’s awesome to be a part of that process. I’m going to look back in 10 or 20 years and be like, I was part of the beginning of that movement within Australia.”

Okine says his heart is now in television and admits he would be disappointed if The Other Guy only ran for one season. “It’s weird, the whole time you go through it thinking, ‘I can’t do this ever again, it’s too difficult,’” he concludes. “I will never give birth to a child – or I don’t foresee myself being able to in my lifetime – but it’s the closest I’ll ever get. The whole process I was thinking it was so painful but, now it’s finished, I feel like another one.”