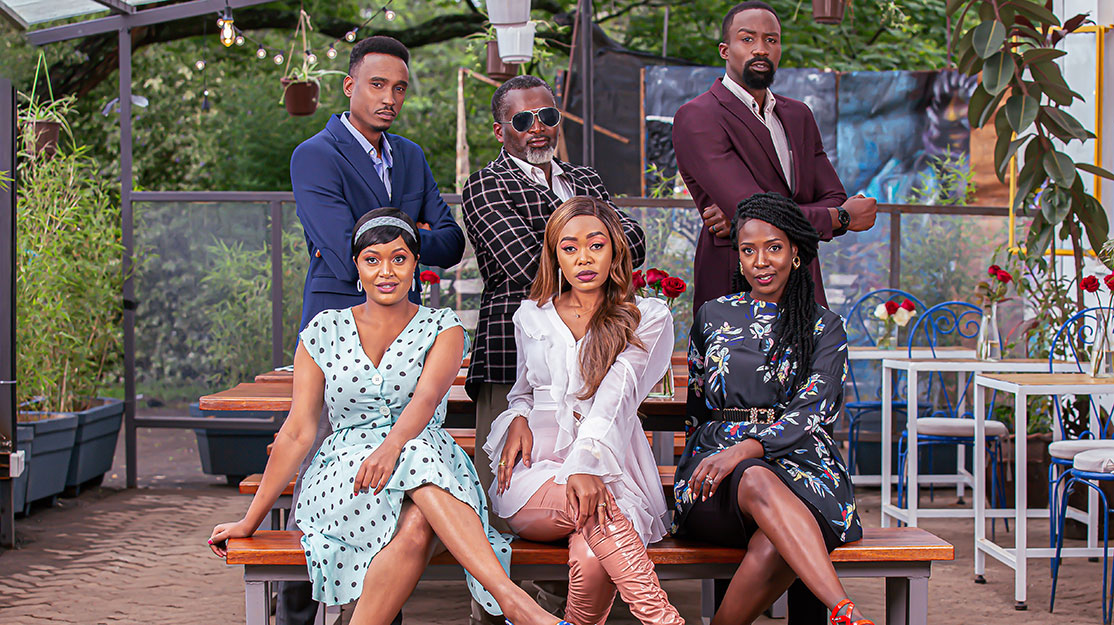 The cast and creative team behind Kenyan drama Single Kiasi (Single-ish) reveal how they relocated South African series Unmarried to Nairobi to tell the stories of three young women dealing with the challenges of marriage, relationships and friendship.

Based on the South African series Unmarried, Kenyan drama Single Kiasi (Single-ish) relocates the action from Johannesburg to Nairobi to tell the story of three women juggling issues in their marriages, relationships and friendships.

Sintamei, played by Gathoni Mutua, is an overachieving, career-focused lawyer who is preparing to marry the man of her dreams. Meanwhile, sassy Mariah (Minne Kariuki) is used to the finer things in life and uses her looks to get what she wants, while Rebecca (Faith Kibathi) is a housewife and mother-of-two who has lived with her high-school sweetheart for nine years, despite not being married.

Why did you want to adapt the original South African series?
Kahaki: The story is universal. It’s about womanhood, love and friendship – this is a universal experience. The story of the three women is relatable to everyone, regardless where you come from.

What changes did you need to make so the series reflected its new setting and audience in Kenya?
Kahaki: We had to make some tweaks and changes for it to be true and authentic to the story. For example, one of the women has an affair with a security guard in the South African version, but we didn’t feel like this would feel authentic to the Kenyan audiences, so the security guard was changed to an intern. This is more reflective of our society. Without giving away spoilers, there is also a wedding in Unmarried that we felt was premature in the Kenyan setting, so this was changed to a traditional cultural marriage ceremony that is more in line with Kenyan society.

What themes did you want to discuss?
Kahaki: We want to discuss themes that are relatable and true to the three main characters and reflect what it means to be a 30-something woman in Kenya. These include sexism in the workplace, societal expectations of women and mothers, maintaining friendships and juggling romantic relationships, and finding your own identity as a woman in the city. This show aims to look at women and allow these three characters to choose what label they want to attach to themselves – single, married, wife, career woman or mother.

How would you describe the visual style of the show, and how was this achieved?
Kahaki: We worked with phenomenal DOPs and directors. The visual style is dynamic and personal.

What challenges did you face in development or production?
Kahaki: Getting the casting exactly right, especially the three main girls. We went through seven rounds of auditions but I think we nailed it with the main three and they have brought so much light to the characters. They are perfect for their roles.

Faith, Gathoni and Minne, tell us about your characters and how they fit into the story.
Kibathi: Rebecca is a stay-at-home mum of two children, who were fathered by her high-school sweetheart Eric. Her kids are her number-one priority. She is solution-oriented but she is also naive when it comes to relationships. We not only see Rebecca as a family woman but also as a reliable friend to Sintamei and Mariah.

Mutua: Sintamei is part of the trio that make up the girls of Single-ish. She is a high achiever struggling to keep and find love but knows that, in all things, her girlfriends have her back.

Kariuki: I play the sassy Mariah, the ‘slay queen’ of the group – a woman who’s not afraid to tell it like it is and who loves the high life provided by the ‘sponsors’ in her life.

Did you watch the original series? Is Single-ish very different?
Kibathi: I definitely took advantage and watched it and appreciated the story and plot. As much as Single-ish was adapted from Unmarried, it gives a totally different vibe – a Kenyan perspective of defining romantic relationships and family relationships.

Mutua: I was able to catch a few moments of the show but did not want to be over-influenced by some of the character choices they made. I think Single-ish is much more Kenyan and adds its own spicy personality.

Kariuki: I channelled most of my energy from Lesego, my character’s equivalent from Unmarried. I find the two shows very similar in highlighting the struggles of the modern-day woman in their marriages, careers and relationships and how they find solace in each other.

How would you describe the friendship between the three women?
Kibathi: It’s a genuine one – the type of friendship anyone would desire, having people you can lean on who are not blood relatives. It’s a safe space from all the shenanigans happening to them outside the friendship.

Mutua: These women have a highly protective and protected love for each other, and despite Sintamei being the lawyer, they are each other’s biggest advocates – pun intended.

Kariuki: We are our own support system. We criticise each other but all in good faith. We want to see the best in one another.

How is their friendship tested during the series, by each other or outsiders?
Kibathi: We see them being non-judgemental of their choices within the circle. These women have very different lives but, somehow, they stay connected. We see them use each other as a cover for their next move.

Mutua: This show explores many facets of their highs and lows and how they help each other through it all. You’ll just have to watch to know specifically how.

Kariuki: Our personalities are different but we have a lot of understanding for each other. We have an unbreakable bond and we only get tested individually by other people.

Did you audition, and did you meet each other before filming began?
Kibathi: Auditioning was the only way to bag this role. I have worked with Gathoni before on another project [a Kenyan drama series called This Is Life] and we kept in touch even after that project. I knew Minne from her previous work and I was excited to be on the screen with her for Single-ish.

Mutua: I auditioned several times. Some of the cast I have worked with before, like Faith, and others I met at our first fitting.

Kariuki: I auditioned too. I got a chance to interact with Gathoni a lot during the pre-production stage and I knew we would gel for this show.

How did you prepare for the series – were there lots of rehearsals?
Kibathi: Of course, I had to watch the South African version, Unmarried, to understand my character and to see how to best show Rebecca in a Kenyan way. I had to start sleep training two weeks before production because this was a long-term project and early mornings are expected.
The rehearsals were important to work on the chemistry between the characters, although it was such smooth sailing blending with my castmates.

Mutua: I mostly prepared alone before we started filming but, once we kicked off, every night before going on set, I ran through my lines with other cast members and tried to build more personality around Sintamei. It’s a never-ending job as she, too, is always learning more about herself.

Kariuki: The group table reads helped a lot with the preparation. It helped me understand my character and also understand the other characters and build chemistry with them. Mentally, I did a lot of research by watching Sex & the City and Unmarried to channel my sassy energy.

In what ways do you think the show is authentic and truthful in reflecting real-life in Nairobi?
Kibathi: We have been shooting in locations in Nairobi, which the audience will be familiar with. In addition to that, the languages in the show are English, Swahili and ‘Sheng,’ which are common here.

Mutua: This project was presented as a modern look at the lives of women in Nairobi, their joys and sorrows and a lot of the familiar life that happens in between.

Kariuki: We tackle real issues that women in Nairobi go through. For instance, Sintamei’s marriage is in jeopardy because she hasn’t been able to have children and her husband is forced to marry another woman in secret to protect his family from ‘shame.’ Rebecca’s marriage struggles because her husband doesn’t make a lot of money and she’s a housewife. At some point, the husband finds a ‘sugar mummy’ who provides for him financially. Mariah’s story is that of a slay queen who enjoys the finer things in life all provided for by her sponsor or blesser. She’s living a fake life for [social media] and is forced to suffer the consequences later on. These are all real issues that the modern woman in Nairobi goes through.

What was your experience like filming the series?
Kibathi: I fell in love with my job all over again. It felt good bringing to life a character that I pictured through the script. Most importantly, it was amazing to work with directors who walk with you to make sure the character delivery is on point.

Mutua: My experience has been quite nice. Recently, I’ve been enjoying working behind the scenes or co-starring, so this was a brilliant excuse to return to the limelight and I’ve enjoyed the work.

Kariuki: I totally enjoyed it and it was a great learning experience for me.

Did you face any challenging scenes or moments on set?
Kibathi: There is no such thing as a smooth sail for any project. There is a specific scene that is set outside at night. It was really cold and I had to wear an open-back dress – good thing the production had organised for hot water and a robe in between takes.

Mutua: Some very early mornings followed by late nights, some very emotional scenes and, of course, a lot of soul searching to find as much depth and truth as I could to bring my character to life.

Kariuki: The most challenging scene was when Mariah had to relive her past – a traumatic experience she’d rather forget. Mariah was sexually assaulted when she was younger, and having to be in her shoes and portray all those emotions was challenging.

Why do you think the series will appeal to viewers?
Kibathi: The creativity, the style and approach used to bring the story to life is one for the books. Not to brag, but the cast understood the assignment.

Mutua: The show is quite different in its approach and storytelling, especially with the exciting backdrop of Nairobi.

Kariuki: Each character is relatable to our modern society. The cinematography is mind-blowing. We are keeping it real. We brought out the fashion, the glam and the drama. It will make the viewers cry and laugh. Mariah is quite the comedian.