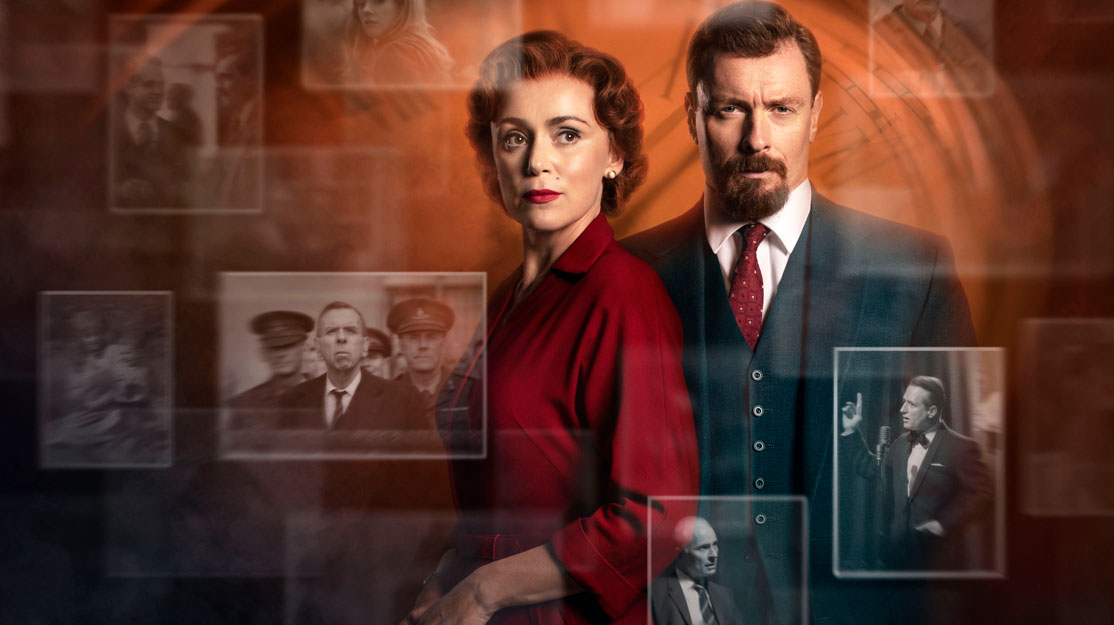 Espionage thriller Summer of Rockets is the first screen work from acclaimed writer/director Stephen Poliakoff to draw on his own life, set in 1958 at the height of the Cold War. He and executive producer Helen Flint talk to DQ about merging fact and fiction.

As a writer and director for the screen over the past four decades, Stephen Poliakoff has been behind work that has amassed numerous Bafta, Emmy, Golden Globe and Peabody awards. The playwright, who learned his craft in the theatre, counts series and films such as Perfect Strangers, The Lost Prince, Friends & Crocodiles, Gideon’s Daughter, Joe’s Palace and Capturing Mary, as well as recent dramas Dancing on the Edge and Close to the Enemy, among his extensive credits.

Yet for all his fascination with the past – among many examples, Dancing on the Edge trails a black jazz group in 1930s London and Close to the Enemy is set in the aftermath of the Second World War – his latest series is the first to draw on his own family and life experiences.

Written and directed by Poliakoff, Summer of Rockets is a semi-autobiographical drama set during 1958, a year that marked the height of the Cold War as fear and suspicion clashed with the start of the mobile revolution and the Space Race. It was also the last time debutants were presented to the Queen at Buckingham Palace and the year of the Notting Hill riots in West London.

Poliakoff says the fact it is partly based on his own life marks Summer of Rockets out as “significantly different” from anything he’s done for the screen before.

“My first real memories are from this time – I was five in 1958 – so I could feel, even as a small child, the apprehension in the air, the feel of nuclear war,” he says. “The Russians were the enemy and yet I was half-Russian, so that made me feel an extraordinary sense isolation as a child. I was also sent to boarding school, as we see in the story, and was the only Jewish boy there. That was why I was drawn to this time.

“There’s a lot of resonance for us now, as Russia again seems to be our enemy and there is also unfortunately, tragically, anti-Semitism in Europe and it’s coming back to the UK. Well, it never goes away. But above all, it was a sense of the absolute epicentre of the Cold War; the fact nobody could be trusted, especially if they were foreigners.”

Another parallel between that period and today, he notes, is the “humiliation” of the Suez Crisis in 1958, which left Britain “a laughing stock” on the world stage. “Things have happened since I’ve written the piece and we’ve become a laughing stock for very different reasons, with people harking back to a sense of our past glories, which also plays a part in the story,” Poliakoff says. “This is not a story about Brexit or a metaphor for it, but nevertheless there are resonances in the piece.”

Toby Stephens (Black Sails) stars as Samuel Petrukhin, a Russian Jewish émigré modelled on Poliakoff’s father Alexander, an inventor and designer of hearing aids, whose clients include former UK prime minister Winston Churchill. The series also focuses on Samuel’s wife, Miriam (Lucy Cohu), and their children, Hannah (Lily Sacofsky) and Sasha (Toby Woolf). In the show, having developed a new paging system for hospitals, Samuel is is approached by the UK’s domestic intelligence agency MI5 to demonstrate his work.

However, it’s not his inventions the agency (led by Mark Bonnar’s mysterious Field) is interested in but his fledging friendship with MP Richard Shaw (Linus Roache) and his wife Kathleen (Keeley Hawes), who also introduce him to Lord Arthur Wellington (Timothy Spall). As Samuel’s life becomes intertwined with his mission, he is left to question how far he is willing to let things unravel for his cause and who he can trust.

It was Poliakoff’s discovery that his father had been suspected of bugging Churchill’s hearing aid, a revelation he first heard when a journalist contacted him about newly released government papers in 2007, that sparked the story behind Summer of Rockets,

“It took me a long time to think about writing it because it meant revisiting my youth and a very traumatic time at boarding school,” he says. “I also tend to write slightly away from my immediate family experience because I find it easier to invent like that. But, after quite a considerable while, because the story kept haunting me, I broached it to the BBC.”

His father’s work, he explains, is truthfully reflected in the story by his hearing aids business, the deaf workers he employs in the factory and his invention of the paging system, which he created for St Thomas’ Hospital in London.

“But I always saw that as a jumping-off point for Keeley’s side of the story,” Poliakoff continues. “My father was besotted with everything English; he was a real anglophile. He was a Russian Jew but he wanted to be an English gentleman, so there’s the story of him being involved in this English upper-class family who have their own darkness and trauma hidden away in a magnificent house. They have charm and grace, they entertain people, but this covers a deep unhappiness.

“My father would have loved to have been entertained in such a house, so that was what led me from that jumping-off point for the fictitious side of the story, but it’s based on the sort of things my father loved and was attracted to by English life and aspired to. The story curve shows Samuel learning that he doesn’t want to be the perfect English gentleman.”

Through the first episode, the story is laid bare against the backdrop of rockets being launched and rising anxiety over what might lie ahead, coupled with the symptoms of post-traumatic stress disorder that stem from the still-raw fallout of the Second World War. Samuel’s technological achievements also shine a light on how industry was set to move forward rapidly over the next decade.

“When you have six hours of television drama, it’s a big canvas. The joy of longform is that you can build a complex world and you can delve deeper into character than you can in a two-hour movie,” Poliakoff says. “It’s great to try to be ambitious when you’re given that length of screen time.”

“The thing is to identify where and how you’re actually going to make it happen,” she says. “Both of us have been around far too long. Therefore, between us and the heads of department, we can work out how to put this on the screen, which is our craft.”

With all of Poliakoff’s work filmed on location, the first task on Summer of Rockets was to find the house belonging to Richard and Kathleen Shaw, which is a constant presence during all six episodes. They eventually settled on Benington Lordship, a grand setting close to Stevenage, 35 miles north of London, which is notable for the Norman keep adjoining the 17th century house and expansive gardens.

“The other important thing was when to film it, because getting lucky with sunshine in this country is not a given – so the schedule is everything,” Flint says.

Finding London streets that could double for the time period also proved problematic, with the slums of Notting Hill in 1958 far removed from the affluent neighbourhood it is today. Another set piece saw a queue of 1950s cars lined up along The Mall, leading to Buckingham Palace, which was filmed early in the morning to avoid the crowds of tourists usually occupying the area.

“It takes a huge amount of work, more work than anybody would imagine, weeks and weeks, and then huge amounts in post-production just to paint out silly lines and stuff like that,” Flint says of filming in London. “After that, it’s all of the countryside, the driving [scenes] and the minutiae. But because we’ve got a cast that is working all the time, we have to try to jigsaw them all in, which is very complicated at certain points. Once you have those actors, the schedule is dictated by that. Then other problems come to the fore because if they’re not available, you can’t do the locations. London exteriors are the hardest, and then piecing it together is a massive jigsaw.”

In some cases, however, the reality on which some of the series is based was too extreme to be dramatised. Poliakoff decided to tone down scenes where Sasha is at boarding school, as his own experiences at school were too “draconian” to be depicted exactly as he remembered.

“When I started writing it, I realised it had to be more interesting and more inventive than the actual thing I experienced, which in reality was relentlessly grim,” he says. “A little bit of that was fine, but I didn’t think an audience would stand for that being repeated in each scene. So, oddly enough, the bit that was closest to reality was the most difficult to write.”

The series sees Poliakoff reunited with Stephens, who starred in his 2001 family reunion drama Perfect Strangers, while this was his first time working with Hawes despite having known her since she was just 19. “She starred in my wife Sandy Welch’s adaptation of Our Mutual Friend 20 years ago,” he recalls of the actor, who has recently starred in Line of Duty, The Durrells and Bodyguard. “I’ve known her for some time and we’ve always wanted to work together. She’s phenomenal in her role, which is a really very juicy role, so I’m thrilled. I think she gives one of her greatest performances.”

Following Summer of Rockets’ launch on UK pubcaster BBC2 tomorrow, all six episodes will be made available on the pubcaster’s VoD platform iPlayer. The drama is distributed internationally by BBC Studios. “‘Bingeable’ is not the prettiest word but, actually, I think my work was born to be binged,” Poliakoff notes. “People over the years have always told me they’ve sat down to watch something like Perfect Strangers, which is only four hours long. They tend to watch the first part and then they’re there four hours later.

“So I very much hope the story has that effect. It does have quite a powerful story that gathers and evolves and changes. It’s great for people to watch it in a linear way or in an immersive way. Either way, I hope people will really get into it.”