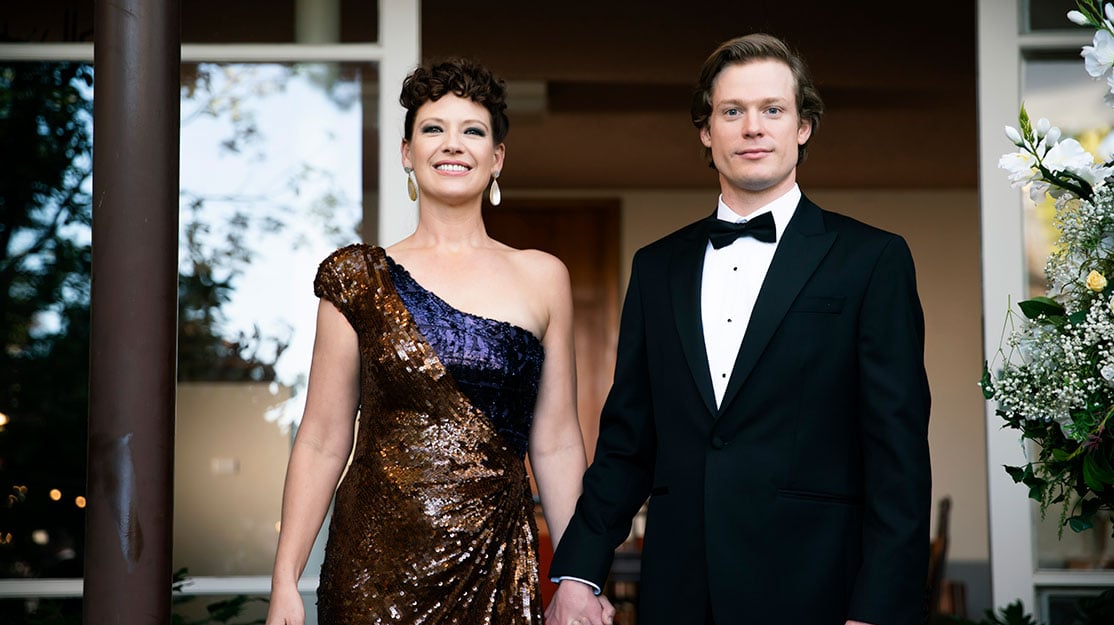 Michael Lucas, creator and writer of Australian drama The Newsreader, talks blending fact and fiction in this 1980s-set series, building the relationship between its star female news anchor and an ambitious young reporter, and what’s to come in season two.

Upon its release in 2021, Australian series The Newsreader became local broadcaster the ABC’s most watched drama series of the year and went on to be named best drama at both the AACTA and Logie Awards down under. Distributor Entertainment One subsequently sold the six-part series to international buyers including the BBC in the UK, Arte in France and Germany, Ireland’s RTÉ and Nordic streamer Viaplay.

Now with Australia and the rest of the world waiting for season two, which is due in 2023, creator and writer Michael Lucas remains fairly relaxed about any pressure to continue the show’s success.

“Very luckily for me, they commissioned the development of a season two before season one aired, which I’m really grateful for, because it meant I got time to imagine what I wanted and what the team wanted without knowing how people were going to respond,” he tells DQ, speaking from the studio where filming is ongoing. “I particularly love season twos of anything because, by then, you know who you’re writing for. And because we had such an amazing ensemble, now their voices are in my head and I just couldn’t stop thinking about interesting territory to take all the characters. I really hope it matches the first season. We’re giving it everything we’ve got.”

Set at the heart of a commercial TV newsroom in 1986, the series stars Anna Torv (Mindhunter) as Helen Norville, the star female news anchor, with Sam Reid (Lambs of God) as junior reporter Dale Jennings.  Against the backdrop of real-life news events, the story follows their personal and professional relationship as well as the drama and tension of a high-octane, chauvinistic workplace full of power struggles.

“At its heart, it’s a story about a relationship between Helen – a very well-established, famous newsreader who is longing to be taken seriously as a journalist and is facing quite a brutal power structure above her – and Dale Jennings, a junior reporter who desperately wants to be on the desk,” Lucas explains. “The two of them get thrown together and form a kinship, a pretty unique relationship, and together they rise up and become allies.”

It won’t have escaped viewers that the news stories on which they are called to report in each episode are based on real-life events. Season one features the Challenger explosion, Halley’s Comet and the Chernobyl disaster, as well as coverage of the HIV and AIDS crisis.

However, the show wasn’t always designed that way. The first draft Lucas wrote involved “generic” stories pulled from the same decade, such as the development of cash machines. But when he took the project to the ABC and found he was able to pull material from its extensive news library, he was encouraged to fold real events into the fictional story.

“I actually really loved it because it becomes a bit of a plotting puzzle when you’ve got all these markers that you know you have to hit and you’ve got to weave your fictional characters around them,” he says. “But for me, it’s a really fun, enjoyable, compelling challenge to see how I can take these real-life events that have their ebbs and flows that I can’t change, and how that can provoke different relationships and turning points for the characters. It engages both sides of your brain, although at times it is a bit maddening.”

When it came to picking which historical moments to use in the show, Lucas gravitated towards events he could remember, such as the Challenger disaster in which seven astronauts died when their space shuttle broke up 73 seconds after launch.

“I’ll always remember those plumes of smoke in the sky. My mother was crying,” he says. “Some I picked just by looking at the first half of 1986. There’s Chernobyl right there, how could you avoid it? But there are also times where we cover stories that aren’t so date-specific – we have an episode about the AIDS crisis and I deliberately positioned it to get maximum emotional impact for the characters. In season two, we’re looking to the heroin crisis as well, where you also have the capacity to position that to really deliver something for the characters.”

But when it comes to the title of the show, which character is The Newsreader? Is the show about Helen’s battle against her male bosses, or Dale’s ambition to crack the top job? In fact, Lucas says the title refers to the position itself, rather than one character. Helen and Dale, he adds, are dual protagonists around which the show is anchored.

“I do often get asked, ‘But which one is The Newsreader?’ In my mind, it’s about the position of the newsreader, which is something that he’s always wanted desperately, and it’s something that she is but feels conflicted about. That’s how I saw it,” he continues.

“But their relationship is definitely at the heart of it for me. In some ways, she embodies a lot of stereotypically masculine qualities in that she’s ambitious, uncompromising and determined, but she’s punished for them, whereas he struggles to fit into that masculine ideal. I liked that they occupied a slight flip on gender stereotypes, which is what I found really compelling about them.”

Lucas started his research for The Newsreader in 2015, before the #MeToo movement brought widespread accounts of sexual abuse and harassment into the spotlight, and says he was horrified by some of the stories he came across – stories that came to inform Helen’s objectification in the newsroom.

“It was a really masculine environment and these few women who were there had an incredible challenge to forge forward,” he says. “I was obviously sympathetic to them but, more than anything, I just saw the potential for huge drama there. They’re facing so much and they’re under pressure on so many fronts. In terms of storytelling, that was really compelling.”

Another compelling element of The Newsreader is Helen’s often ambiguous relationship with Dale, who doesn’t make a good first impression on her until he comes to her support during a medical emergency. They then build a close relationship that leads to questions among others in the newsroom about whether their connection is solely professional.

“They have a real kinship together and a connection. But the way we’ve depicted it, I hope it’s not entirely certain whether it’s a great professional relationship, it’s a great friendship or, as Anna says sometimes, whether Helen feels a slightly maternal vibe towards him,” Lucas says. “I don’t think it’s too much of a spoiler to say it does become romantic, but then there are complexities to that as well.

“I was just really lucky that I was working with the actors in particular and the director, Emma Freeman, who was a huge part of the storytelling of this show. We were all really attracted by the idea of showing a love and a kinship that didn’t entirely fit into any particular box. In some ways, they’re a brilliant team; and in some ways, they’re made for each other, but there are core things about them that mean they don’t fit into a conventional box. There are innate aspects of their personalities that mean they’re wonderful together but also that they can’t ever be the conventional couple the world wants them to be. We just love sitting in that space.”

Lucas wrote season one alongside Kim Ho, Niki Aken and Jonathan Gavin, with support from script consultant Debra Oswald. Before each episode was written, the research and archive footage would be locked in, with work on the character arcs then taking over. It meant that by the time a writer was assigned to write a particular episode, a comprehensive outline of the factual events involved would already be in place.

“The plotting is pretty detailed. Often by the time we’re writing our breakdowns, we’ve gone into a fair bit of detail. Having said that, the emotional arcs and storylines did tend to evolve a lot even within the timeline structure we had set,” Lucas says. “That was always an ongoing discussion up to and including being on set, and then even to a certain extent in the edit suite. We were still honing those emotional beats and moments.”

Setting the show in the 1980s, Lucas and Freeman – who returns for season two – wanted to avoid creating an “MTV version” of the decade and instead sought to keep the style and fashion grounded, to present it as it it had been filmed at the time it is set. Vintage lenses were also used on the cameras.

Season two of the show, produced by Werner Productions, moves the action forward as the News at Six team enter 1987 and 1988, as does The Newsreader’s music, fashion and hairstyling.

A year on from the events of season one, Helen and Dale are established as ‘The Golden Couple of News.’ To the outside world, they present a glowing image of success and romance. But the truth is more complex. As 1987 rolls along, global stocks will soar and crash, Australia will prepare to celebrate its bicentennial year, and Helen and Dale grapple with who they really want to be in life – and whether they can tread that path together.

“The world is just ready for them to get married and do all of that, but they’re just trying to figure out what they should be to each other,” teases Lucas. “In the midst of that, of course, they’re dealing with elections, the stock market crash and the separation of Diana and Charles. All those iconic events are rolling on as they continue to try to figure out who they should be publicly and privately.”

Torv and Reid return to the show alongside co-stars William McInnes, Robert Taylor, Michele Lim Davidson, Stephen Peacocke, Chai Hansen, Chum Ehelepola and Marg Downey. They are also joined by newcomers Daniel Gillies and Philippa Northeast, as the world of the series expands with new characters.

Looking ahead to a potential third season, Lucas admits the biggest hindrance to continuing the show may be the growing popularity of its cast. Torv is set to appear in HBO’s The Last of Us, Reid stars in AMC’s series adaptation of Interview with the Vampire and Hansen appears in upcoming Prime Video fantasy drama Night Sky.

“At week eight of 11 [of filming], I’d be lying if I said right now I’m that fixated on that, but I love the world and I love the characters,” he says. “But also we have this huge cast that are incredibly in demand. It feels like it was a bit of a miracle to get everyone back together for season two. I don’t know whether lightning will strike a third time, but if it does, I’d be thrilled. We just have to wait and see.”