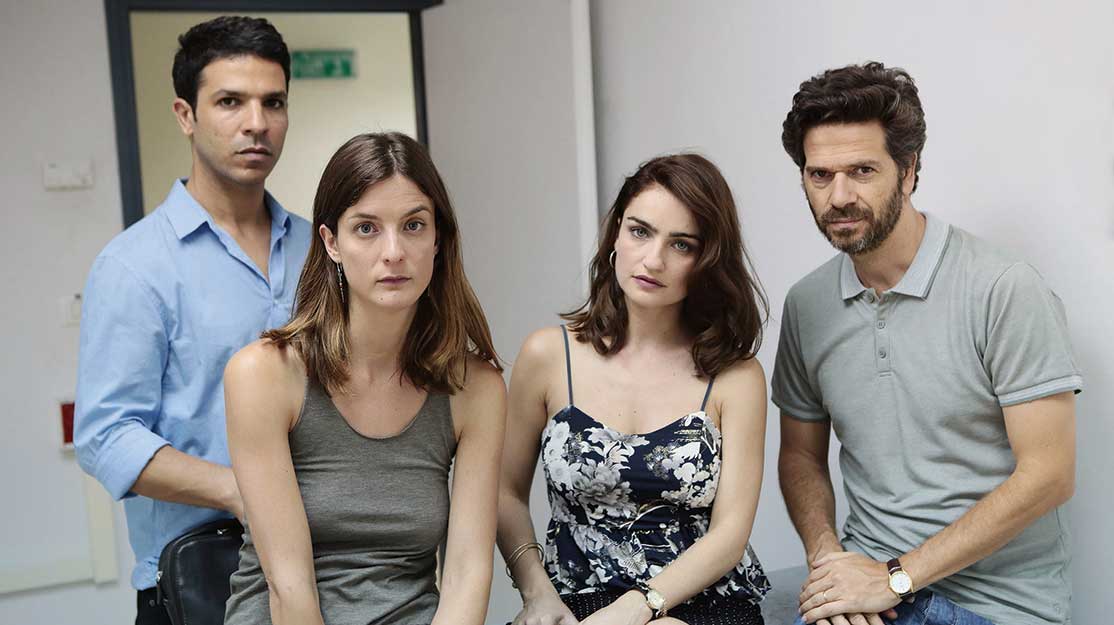 Five ordinary people are accused of a high-stakes kidnapping in False Flag, the latest hit series to come out of Israel. As the thriller is rolled out around the world, DQ chats to producer Maria Feldman and writer Amit Cohen about weaving this tangled web of secrets and lies.

It was in October 2015 that Fox Networks Group (FNG) secured a landmark deal for the latest buzzworthy show to come out of Israel, a drama called Kfulmin (False Flag).

That agreement with distributor Keshet International afforded Fox global rights to the eight-part series across 127 countries around the world.

It marked the first ever Israeli drama to be picked up by FNG and, in fact, was the first time FNG had ever acquired a non-English-language series on a global scale.

Now, almost two years later, the series is finally being rolled out around the world. It debuts on Fox UK on July 31.

The gripping espionage thriller opens as breaking-news broadcasts screen CCTV footage of the Iranian minister of defence being abducted from his hotel room during a secret visit to Moscow. The identities of the five kidnappers are also made public – Israelis with dual nationalities who are reportedly part of the country’s intelligence agency, Mossad.

The seemingly ordinary citizens accused of being the kidnappers are stunned to find themselves named in the daring plot, and their attempts at denial are all in vain as the publicity turns their lives upside down and sweeps them up a wave of public attention.

The daring series is inspired by the true events surrounding the assassination of Mahmoud al-Mabhouh, a senior Hamas official, in Dubai in 2010. Producer Maria Feldman had been thinking about creating a show about Mossad when newspaper coverage of al-Mabhouh’s death was accompanied by the passport photos of Mossad agents linked to the incident.

“Then I said, ‘What if those people were not Mossad agents but just real people who got up one morning and were being accused of being Mossad agents?’” she recalls. “So that’s how it started.”

To develop the story, Feldman partnered with journalist Amit Cohen and together they took their idea to Israeli broadcaster Keshet. This first meeting took place in 2010, not long after the real assassination and five years before the long-gestating series would finally air.

“It was a long project,” Cohen admits. “I was a journalist at the time as the Palestinian correspondent for a big newspaper in Israel and I covered the assassination as part of my work. When Maria approached me with [the idea for False Flag], I admit I didn’t see the drama in it . Only after talking to her and understanding what she had in mind did I start to see the potential.”

Development progressed once they decided to use the kidnapping as the starting point of the story, rather than the story itself, and Cohen wrote every episode himself.

“The writing was the easy part,” he jokes. “Maria and I sat together for meeting after meeting to break the story and to make sure we had completely written characters that made an ensemble. Each one acts differently but is part of a bigger puzzle, and at some point the director [Oded Raskin] came in to give his input. We took our time to make sure we were completely happy with it. The director said at the end that this was a show he would want to watch, and that’s how we treated it. We wanted to do something we would love to sit in the living room and watch, even if someone else made it.”

From the outset, False Flag was a story about characters, and Cohen recalls delivering an eight-page outline to the broadcaster that largely focused on the ensemble cast. Throughout the development process, they and the story remained the same as the writer set out their motivations and desires, with each one reflecting a different strand of Israeli society.

“We wanted to talk about aspects of our society,” Cohen explains. “But when it came to adding the thriller elements, we didn’t want it to feel extravagant – this is why it takes some time before people die or before we see a gun in the show. Keshet bought into the story right from the beginning but they wanted to make sure we had enough [story for the series]. They thought we had a great starting point but wanted to see if we could hold the audience and have three revelations in each episode, not necessarily related to the plot.

“We had things we thought could leave until the end but Keshet said, ‘No, you have to reveal it in episode three or episode one.’ You need a very quick sale or viewers will get bored, and it improved the show because it forced us to find more secrets or make our mechanism more efficient. It really helped.”

Beyond the central plot, Cohen was keen to ensure the concept of a ‘false flag’ – a modern term describing a covert action carried out to appear as if other groups or individuals were responsible – ran throughout the series.

“We use this intelligence jargon as a theme where you see something but you’re not sure if what you’re seeing is right,” he explains, pointing to a scene at the start of episode one when a man and boy are playing with guns. “You think are they assassins but no, they’re father and son and the son is going to the army. So we played with this theme throughout the show – you think you know something, you think you know someone and then we change it. It was how we built secrets during the show. It’s an important part of the show’s DNA. We didn’t want the secrets to be too exaggerated. We wanted it to be ordinary secrets, like someone having an affair. The first part was to find the secrets, and then we had to figure out how to reveal them along the show.”

The revelations come thick and fast during the series, produced by Tender Productions, as the audience is left on edge wondering how the events will play out and whether the central characters really are just ordinary citizens or whether there’s more to their involvement in the kidnapping plot than it appears at first.

“The audience follows our lead in uncovering who is innocent and who is not, and they get a pay-off in each episode when we reveal certain things that are true,” Cohen says. “We were really nervous about it, I have to admit, because there was a question about whether the audience would follow something with so many characters and so many secrets, not only for the plot but emotionally as well. But Keshet decided to go all the way with it.”

From a production point of view, Feldman says the biggest challenge was telling a story from five different perspectives, with the number of locations and additional characters associated with the main ensemble.

Cohen interjects: “In many cases, the writer wants to write whatever he wants and then the producer and the director tell him he can’t do it, particularly in Israel with the low production budgets we have. But on False Flag it was the other way around. I tried to be economic; I tried to write scenes that weren’t expensive. In one scene we have an explosion, so I wrote that it happens on the horizon and we see it from a distance. But they said, ‘Don’t write it cheaply, write it the way you want.’ Shooting at the airport is expensive and I asked if we could do it. They just said, ‘Write it how you want it and we’ll find a way’ – and Maria found a way. All of us were really emotionally invested in the story and the way it looked.”

Casting did present another challenge, however, as Feldman and Cohen sought to avoid hiring big-name talent in order to keep the series grounded. The five central characters comprise Ishai Golan as Ben Rephael, a chemist and family man; Magi Azarzar as Natalie Alfassia, a bride-to-be who sees her face on the news just hours before her wedding; Ania Bukstein as kindergarten teacher Asia Brinditch, the one alleged kidnapper who revels in the immediate media attention; Angel Bonanni as Sean Tilson, who is flying home from a trip to India when he is informed of his new-found notoriety, leading to a suspicious mid-flight haircut; and Orna Salinger as Emma Lipman, a Briton who has just gained Israeli citizenship and has a link to Raphael.

“Almost all the actors who weren’t big names became really famous after the show, and Ania has now been in Game of Thrones [playing priestess Kinvara in season six],” reveals Feldman, describing casting as a “complicated” task. “We had to find the best actor for each role and then we needed to see that they could work as an ensemble. It was a very difficult process but the ensemble works great.”

With its debut on Fox around the world imminent, the series looks set to become the next global hit from a country that has previously launched Hatufim (Prisoners of War, later adapted as Homeland), BeTipul (In Treatment), Fauda and Hostages to critical and popular acclaim.

Feldman puts the global success of Israeli drama down to their focus on stories and characters, while Cohen adds: “They feel very realistic and very grounded – this is something the Israeli audience demands. They want to see themselves and their families, so it forces writers, producers and directors to do something that appeals to most people. The fact we can’t use a lot of action or car chases [because of low budgets] forces us to put our focus on characters, stories and plot.”