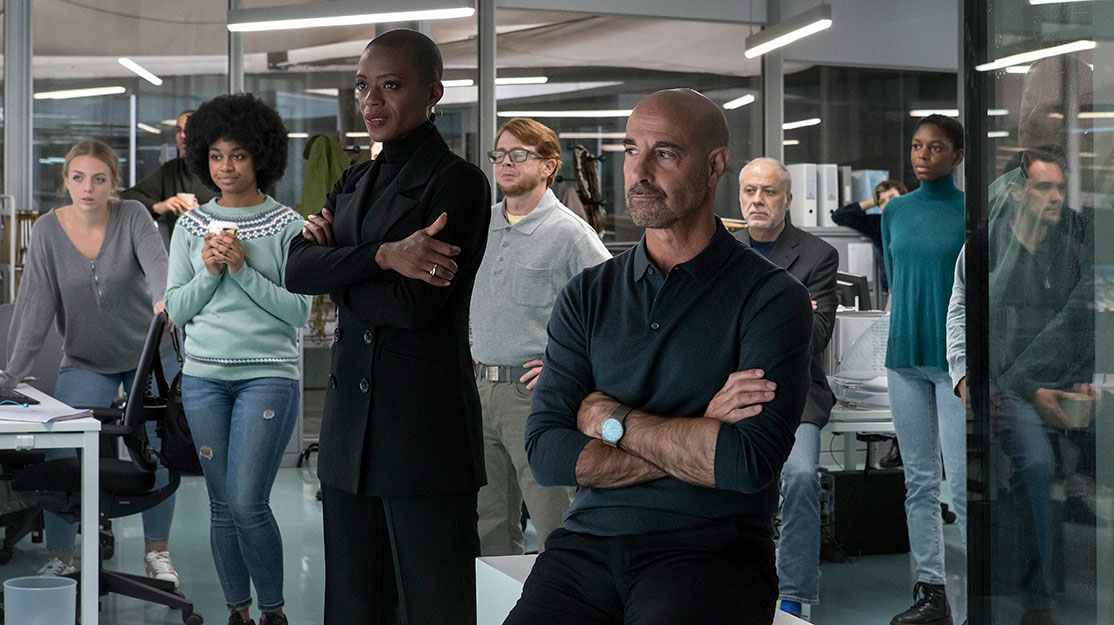 Award-winning director Alejandro Amenábar tells DQ about making his first television series, La Fortuna, in which a battle wages on land for the spoils of a centuries-old shipwreck discovered in waters off the coast of Spain.

After embarking on La Fortuna, his first television project, director Alejandro Amenábar feels like he has been on a “long journey.” It’s little wonder, as he has helmed all six episodes of a series that unfolds on on both sides of the Atlantic Ocean and blends a coming-of age story with adventure, history, treasure hunting, politics and courtrooms.

La Fortuna is based on graphic novel El tesoro del Cisne Negro by Guillermo Corral and Paco Roca. Inspired by true events, it follows Álex Ventura (Álvaro Mel), a young and inexperienced diplomat who unintentionally becomes the leader of a mission to recover sunken treasure stolen by Frank Wild (Stanley Tucci), an American adventurer who travels the world plundering items of common heritage from the depths of the sea.

Teaming up with Lucía (Ana Polvorosa), a combative public official, and Jonas Pierce (Clarke Peters), a brilliant American maritime lawyer with a passion for old pirate tales, Álex sets out on the adventure of a lifetime, during which he learns about the importance of love, friendship and commitment to your own beliefs.

“It’s been a long journey because I decided to direct all six episodes, which meant lots of weeks of shooting,” Amenábar tells DQ. “Compared with my previous work, it was about the quantity, not quality. It was like directing two or three movies, but the process was very similar to making a movie. The Covid situation made everything worse, as it did for everyone else, so we had to be careful, but we were lucky at the same time. We were able to finish the schedule with no delays.”

The Spanish-Chilean director, whose 2004 movie The Sea Inside won the Academy Award for Best Foreign Language Film, initially considered adapting the graphic novel as a feature. But after he began to work with co-writer Alejandro Hernández, the pair discovered there was far too much material to cram into a two-hour running time.

“I was really engaged with it,” Amenábar says of the source material. “We realised it could be a three-episode series, then four episodes, and we ended up writing six” –  a decision that worked out well for Spanish streamer Movistar+ (Dime Quién Soy, Libertad), which produces the series in association with AMC Studios and MOD Pictures. The series will have its maiden voyage today at the San Sebastian Film Festival, where it is the only TV series to be screened, ahead of its debut on Movistar+ on September 30. Distributed by Beta Film, it will also air on AMC and AMC+ in the US, Canada, Latin America and the Caribbean.

“What engaged me about the story is there is something quite uplifting about it. It’s not only a journey of adventure and stolen treasure; you also have humour and a love story, and it was something I hadn’t tried very much in my previous movies,” Amenábar continues. “I wanted to do a series that would have some of the feelings I had when I used to watch movies as a child – movies by Steven Spielberg or James Cameron. This project also allowed me to explore two worlds, the Anglo-Saxon culture and the Spanish culture. I wanted to jump from one world to another and play with some of the characteristics of both worlds.”

From the outset, there is a grand sense of adventure as Frank, backed by a huge corporation and the latest technology, locates an unidentified shipwreck close to the coast of Spain. Further exploration beneath the waves using a remote controlled submarine determines the wreckage contains priceless treasures, and Frank is quick to claim it as his own. But when the Spanish government learns of Frank’s actions, Álex and Lucía team up to discover the truth about the wreckage – thought to be the long-sought-after La Fortuna, which was sunk by the British Navy in 1804 on a voyage back from America carrying gold and silver now worth millions of dollars.

The bilingual series moves back and forth between Washington DC and Madrid, while there are also detailed recreations of the ocean-set battle that sent La Fortuna to the bottom of the sea.

“That was the challenge, to make it organic, because I wanted to be as expressive as possible and have the feeling we are in the US at one point and then the feeling we are in Spain, and then we have to go into the past more than two centuries ago,” explains Amenábar. “Everything needed to be organic. That’s why I also insisted on directing the whole series, to give it some continuity. It’s playing with the clichés of the two cultures. I wanted to show how a meeting in a ministry in Spain can be quite different from a meeting in the US. Here, people improvise more; you have a chaotic feeling sometimes, so I wanted to play with that contrast.”

As well as his first move into television, La Fortuna also marks the first time Amenábar has adapted existing material, which he admits made the writing process easier, providing a map that had already laid out the direction of the story. “You have the whole skeleton and I really loved the comic book,” he says. “There is a structure, but the process was really fast. It took us more or less the same amount of time as when I write a movie. We were engaged and excited about what we were doing.”

Not only a writer and director, Amenábar is also known for composing the music for his own films. While he passed on the latter to Roque Baños (In the Heart of the Sea) on this occasion, he says his dual role behind the scenes meant he already had concrete ideas of how the series might look when he was finalising the scripts. After more than 20 years as a filmmaker, Amenábar describes himself as a very specific director, though he is open to debate and change.

“I love that process with the crew,” he says, “but I try to come to the set with very clear ideas. In this case, in order to portray the Spanish world differently from the American world, I used handheld cameras, which is something I don’t usually do. So in the Spanish segments, almost all the camerawork is handheld because I wanted to give it something less accurate in visual terms.”

Filming on La Fortuna began in July last year, a process that was complicated by numerous actors coming to Spain from the UK and the US several months into the Covid-19 pandemic. Though the series is set both in the US and in Spain, the coronavirus situation also meant it wasn’t possible to fly a whole crew across the Atlantic. As such, a decision was made to mainly shoot the series in Spain, most notably around Madrid, Cádiz, Guadalajara, A Coruña, Zaragoza and even the Palacio de la Moncloa, the official residence of the prime minister. A second unit later travelled to Washington DC to capture some establishing shots.

To film the scenes recreating the battle that sunk La Fortuna, the crew set up in Pasajes, in the Basque province of Guipúzcoa on Spain’s northern coast, where the historic frigates Étoile du Roy and Shtandart are anchored. Both ships were used to film the dramatic scenes between the Spanish Armada and the British Royal Navy.

“We had incredibly support from Spanish institutions – the army, the navy, many ministries – so that allowed us to have incredible production values,” Amenábar says. “I like to have everything well prepared before I start shooting, so I tried to do my homework. For instance, I don’t use many cameras when I’m shooting. I prefer to use a single camera and know exactly where I’m going with it. It’s about preparation and the support from Spanish institutions.”

In fact, the naval battle was originally planned to be the first scene that would be shot. When Covid intervened, it was then pushed to the end of the production schedule. “Surprisingly, it was very easy,” the director says. “We shot it in the north of Spain, where it was supposed to be raining. In the rest of Spain, it was pouring but in that particular place where we were shooting, it was sunny. We were incredibly lucky, but it didn’t feel to me that the technical things were much more complicated. When I did a movie like [2009 historical drama] Agora, I learned that when the production is bigger, you have tentacles. You have people supporting you.

“When we had this Covid situation, I agreed with my producers that if we ran out of money by the time we shot the battle, I would find a way to tell what happened without showing it. Fortunately, we had the money.”

In front of the camera, Amenábar built an ensemble cast that pairs American stars Tucci (The Lovely Bones), Peters (The Wire) and British actor T’Nia Miller (The Haunting of Bly Manor) with Spain’s Mel (La Otra Mirada) and Povoroso (Cable Girls), who are supported by Karra Elejalde, Manolo Solo and Blanca Portillo.

“When you have such a wide range that goes from someone like Stanley, who has had a big career in movies and television, to someone like Álvaro, who is our main character and has done almost nothing, as a director, the only thing you have to do is provide confidence in everyone,” he says. “I want everyone to feel they are supported and useful. That was my task, trying to get everyone to enjoy the process, whether that meant working with an American actor or a Spanish actor with a lack of experience. That’s my process.

“I like rehearsals, of course, but I don’t like to lose some of the freshness you can get when you’re doing it at the time. I tend now to trust the moment when you’re actually directing.”

Tucci is used to playing pirates, having been cast as Captain Hook in a 2015 feature-length drama called Peter & Wendy, based on JM Barrie’s classic story Peter Pan. In La Fortuna, it is the Spanish minister of culture who sets the scene for the battle to come, warning, “In this movie, the pirates cannot win – must not, will not win.”

“It’s been hard times for everyone all over the world. For me, it was a privilege to be able to go out to set every day when more than half of the country had stopped,” Amenábar says. “This story is uplifting. It talks about the good nature that is within us and when you do something like that in this particular time, that is a good experience. When people watch the series, I would like to leave them with a smile on their faces.”