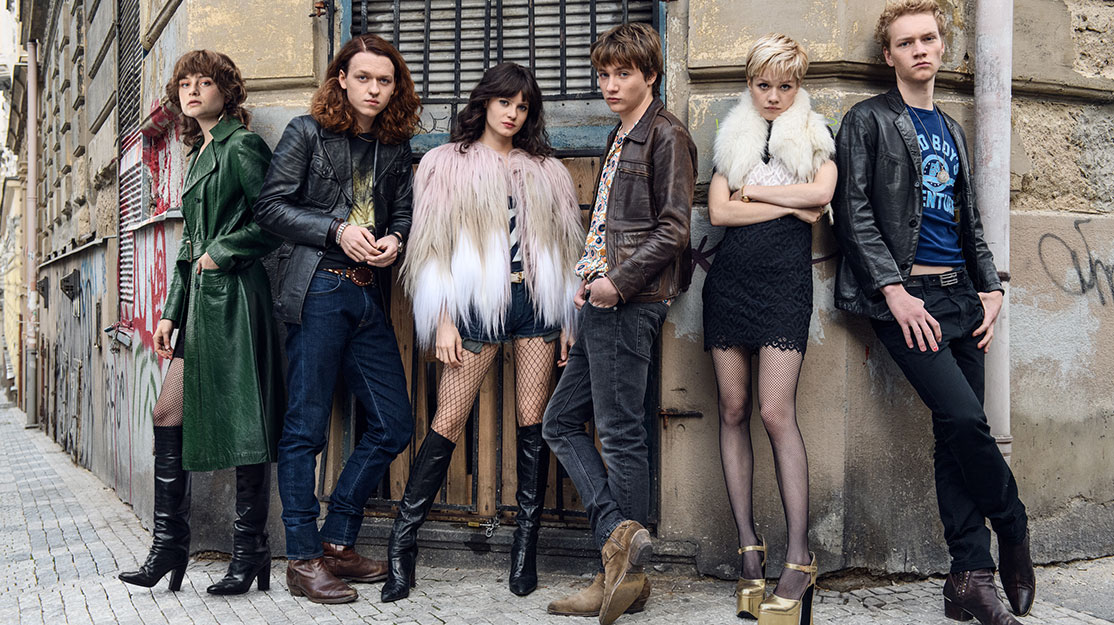 In 1978, German actress and musician Christiane Vera Felscherinow detailed her abusive childhood and descent into teenage drug addiction and prostitution on the streets around Berlin’s Zoologischer Garten station in a book called Wir Kinder vom Bahnhof Zoo (which means ‘we children from Zoo railway station’). The book was then adapted for the big screen in 1981 under the title Christiane F, as she is more well known, and the film became a cult hit. David Bowie featured among the cast.

Writer Annette Hess – whose credits include Weisensee and the Ku’damm trilogy – was among those who loved the biography, but she was less enamoured of the film.

“When you see your favourite novel adapted on screen, it’s always disappointing, of course,” she tells DQ, with the limited running time putting the spotlight on Christiane herself and less on her family, friends and the Sound nightclub that becomes their regular haunt. “It explains a lot about addiction in the end, but I was sitting in this cinema and I couldn’t believe what I saw.

“Today, of course, I love the movie because it’s a document of this time. But for me, the boom in television series means we can now tell her entire story and the story of her friends too. It has meaning that our series is called We Children from Bahnhof Zoo and not Christiane F. It’s an ensemble series and everyone in this group is important to telling the story of how we can be carried into addiction.”

Directed by Philipp Kadelbach (Generation War), the eight-part series (German title Wir Kinder vom Bahnhof Zoo) debuted on Amazon in German-speaking territories on February 19 and then landed on Nordic streamer Viaplay at the end of the same month. Revolving around Christiane and her five friends who come together in the intoxicating clubs and underground parties of 1970s Berlin, it explores the teenagers’ struggles, friendships and their search for identity that leads them into drug addiction.

The show comes from Contantin Television, where producer Sophie von Uslar was looking at the original book as a potential series and had connected with the journalists who conducted the original interviews with Christiane on which it is based. By serendipitous fortune, von Uslar then approached Hess with a view to working together.

“The book was really important to [Hess] when she was young. At that time, she was quite disappointed when she saw the film because lots of what was important to her wasn’t in the movie,” von Uslar explains. “She said that if we wanted to do a big series, now would be the time for We Children from Bahnhof Zoo.

“Then we met the journalists and, luckily for us, they still had the original tapes with all the interviews from the 70s. They gave them to us and there was lots of stuff in there that wasn’t in the book so that gave us a starting point to really develop the world and create all these characters’ friends.”

Produced by Constantin in coproduction with Amazon, Nordic Entertainment Group, Wilma Film and Cattleya, work on the series began three years ago, building up the characters from the book and fleshing out their backstories to put greater focus on their relationships at home. In particular, Hess didn’t want to repeat the story of a teenager from a troubled background falling into increasingly harder drug use and eventually prostitution with every character, so instead each is shown to be dealing with a different stage of addiction.

“In the end, it always comes down to the point where the drug is more important than anything else, meaning friendship,” von Uslar says. “We introduce them in the first episode and bring them all together at the end at the Sound club. From there, we dive into their family backgrounds. We also see how they become friends, how they become close and what the group dynamic means for them and how they get stronger by being together. Then drugs are introduced and addiction becomes more important, and then we see their downfall.”

The producer describes We Children from Bahnhof Zoo as a coming-of-age story. The characters all have their own dreams and their own problems but they are united by their hopes of finding a place they belong. And while there is an element of dysfunction in each character’s life, the fact they come from a range of backgrounds highlights how addiction can be universal, regardless of status. Then as the story progresses, home for them is no longer the place where they grew up but the one they create together amid their abusive and co-dependant but reliable relationships.

“By becoming friends, it’s them against the world,” von Uslar continues. “They accept each other the way they are, with their specific dreams, their abilities and also the points where they fail – but they don’t fail each other. The drug use in the beginning is like an enhancer for all that, but it’s also fun. It’s something we show.

“What we hope is that the audience builds an emotional relationship with the characters. We never try to be smarter than our characters, meaning we take this youthful power and also naivety to dive into the story and into the settings and the club, the music, the partying and all of that. At some point, it starts to break because addiction kicks in and, in the end, the ones who survive grow up, so they’ve got to deal with their mostly shattered dreams and try to move on from there. That also means the group starts to fall apart because what brought them together is not the topic anymore.”

Hess has always preferred to write alone, but she knew on this project that she wanted to work alongside some younger writers who could offer alternative perspectives on the subjects and numerous depictions of drug use in the series. Spending some of her time teaching at a film school, she picked five writers to help her develop the series, which focuses on character development across the eight episodes rather than inserting flashbacks and time jumps that might complicate the plot.

“It was like therapy group because we talked so much about our own families and how we tried to belong to a group when we were teenagers, and our first experience with drugs,” she says. “Everybody has a story, so we were talking about these characters, Christiane and her parents. Because it’s down and then up again and uplifting in the end, the plot wasn’t something to discuss [too much] but rather the psychology of the characters.”

The cast includes first-time actors Jana McKinnon (Christiane), Lea Drinda (Babsi), Jeremias Meyer (Axel), Michelangelo Fortuzzi (Benno), Lena Urzendowsky (Stella) and Bruno Alexander (Michi). At first, they didn’t audition for specific roles, instead playing out scenarios and monologues as the production team sought to find the right dynamics between them. Owing to the heavy subject matter, they also made the decision early on to cast actors older than their characters. But while they quickly identified most of the young cast, finding someone to play Christiane proved more elusive.

“That was something that happened pretty close to the start of principal photography,” von Uslar remembers. “There were two girls in a photograph and, while talking about the other actress, who was too old, the casting director said, ‘Who’s the girl in the background?’ It’s one of these classic stories. We asked if she [McKinnon] was available on a Friday and we sent her scenes on Saturday. She came to the casting on Monday and we decided on Tuesday morning. All of us saw her and said, ‘That’s her.’”

Then when it came to designing the series, which is distributed internationally by Fremantle, the producers wanted a timeless setting that didn’t look like a classic period piece. They also knew they couldn’t base the production in Berlin due to the lack of 70s architecture, so they chose to split filming between the German capital and Prague. The Zoo station was recreated in an empty factory, with numerous sets put together to create the overall location, and computers were then used to fill in the backgrounds. The Sound nightclub was built in Prague.

“Most challenging for everybody working on the project was the idea of timelessness,” von Uslar says. “The different departments had to talk to each other all the time so, in the production office in Prague, we had everything on the wall so everybody could look at what everyone else was doing. Pandemic-wise, we were extremely lucky because we finished principal photography at the end of February last year, so just before the lockdown, and then we had to deal with it during our year of post-production. But we made it through and we delivered on time.”

Believing “a good series can be a training in empathy,” Hess hopes viewers find an emotional connection with the six teenagers at the heart of the story, rather than simply looking down on them or judging them for their failings.

“That was very important and a challenge in the writing process not to judge them when, for example, they went into rehab and the next thing they do is go back to the Zoo and buy another packet of heroin,” she says. “It was difficult to hold empathy while telling the story of these young people, but I would love it if it helps viewers feel empathy with other people at the borders of society.”