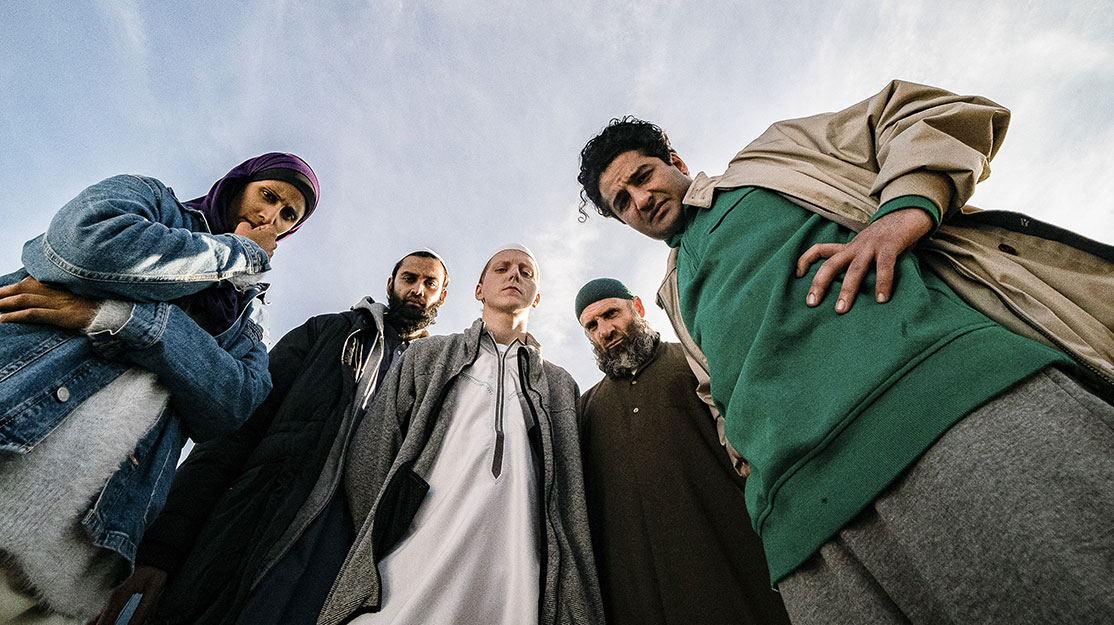 Set against the backdrop of the idyllic landscapes of Telemark, southern Norway, eight-part series Jordbrukerne (Countrymen) tells the story of how an unlikely group of friends inadvertently open the country’s first halal cheesemaking business.

Following the death of his girlfriend, Marwan (Nader Khademi) attempts to leave Norway with his young daughter. But after they get into passport-related difficulties, Marwan links up with a childhood friend, Adil (Ayaz Hussain), who is moving to a farm in Telemark with some friends. While Adil and co do not know Marwan has kidnapped his daughter from the care of her grandparents, Marwan is unaware that the others have no intention of becoming farmers.

Drawing attention from members of the local community, the group is then set on a path away from their originally suspect plans to become the makers of Norway’s first halal cheese.

Distributed by Banijay Rights, the series had its world premiere at French television festival Canneseries last month, where it also won the special interpretation prize and the high school prize for best series.

Here, Aliu, Bjørnstad and Khademi tell DQ about the origins of the project and how they wanted to disrupt the way themes of extremism and radicalisation are more commonly depicted in television.

Where did the story come from?
Bjørnstad: When I contacted Izer and Nader, I was very curious about how they would feel about this idea because the heart of the idea is to tell a story of de-radicalisation. You have seen this story before, or these types of characters before in fiction, but what if that’s your starting point and the story becomes unexpected and not the one you see in Homeland or thrillers like that? They both really liked the idea and saw the potential and came along from that point on.
At that time, the idea was of some of these characters coming to the countryside with dark plans, but when they get there, life happens and they are integrated into society against their will. It felt like an interesting starting point to take a stereotype but then tell a different story from the one you might expect. Both Izer and Nader thought it was an interesting concept and one they would like to work with. They are both top talents in Norway so it made it a very appealing project.
The kidnapping was Izer’s idea. That was another stereotype. It felt like Izer wanted the worst, most challenging starting point to start with and then to tell an unexpected story. Izer’s hallmark is that he makes very well-rounded characters that are very human, likeable and conflicted. I feel like every character in the show is surprising when you get to know them a bit better.

Aliu: Anne had the idea at the beginning and approached me, so we were in the process together very early on. For me, it was really fun to go deep down into the story we wanted to tell.

Khademi: [Starting together early] makes it so much easier to work with the material. It’s been four years since we started this, and Izer also started to write it very early because we knew we were going to make it. We had constant dialogue from day one, which means you get so much closer to the story. As an actor, I’m used to coming in very much later in the process. This is a good way to make a TV show.

How did you balance serious themes with the show’s humour and lightness?
Aliu: The easiest way to make people laugh – when they laugh at themselves – is when it’s true and real. Every culture has its own ritualistic behaviour or things people do every morning. We focused a lot on those things, being able to show the things people observe about each other but also laugh with them, not at them. We don’t point fingers. There are situations, even if you are not in that setting yourself, that hopefully you can understand and see the humour in it.

Nader, what are your thoughts on Marwan and how he fits into the ensemble?
Khademi: Maybe that’s what he doesn’t do – he doesn’t exactly fit in anywhere. He’s just trying to make things happen but he makes some bad choices, which I understand but I can’t defend. I can understand this guy wants to kidnap his daughter, but actually doing it is pretty insane.
It has been so great developing the character. It’s something we have done together all this time. We talked about how Marwan could be the ‘Norwegian’ in this group. People identify with those they recognise or see themselves in. We don’t all fit together, we can’t just click.

Aliu: Marwan has this cultural background [of Islam] but, at the same time, he has another one he’s adopted [in Norway].

Khademi: That is probably one of the most interesting things to work with, the way he tries to be a chameleon and always fit in. He suddenly changes his name to Martin and tries to fit in everywhere. And if you try to fit in everywhere, I guess you don’t fit in anywhere.

Nader, as an actor, what was it like to be so heavily involved in developing the series?
Khademi: It’s been a gift. You just feel so much more ownership and you automatically want to give more to the project. It’s been such a fun time. We always wanted to work together and now we get to do it. I live next to the studio where we recorded the sound and the voiceovers. I can sit at home and watch the show and, if something isn’t perfect, I can run next door and speak to the sound guy [to change it]. That’s something I want to do because I feel so invested in the project.
Everybody went beyond [their duties] and everyone had that feeling on set as well. We had the feeling we were doing something special here, and everybody wanted to be a part of that. They went the extra mile.

Izer, the show mixes traditional camera techniques with individual, close-up shots of each character. How would you describe the drama’s visual style?
Aliu: The plan was to have – and we did to a large extent – very long takes. Our philosophy was to frame the action with the camera. But then you also have this need for close-ups and contact with the characters, which allowed us to do much more. For an actor, you have to attack this in a more theatrical way. We also worked a lot with smaller details. A lot of that was supposed to reflect the different characters – for example, we show Marwan shaving, while the other guys have beards.

Why do you think this show could get viewers talking?
Bjørnstad: I just hope they will watch it and be open to falling in love with the characters. The backdrop is quite dark. The fear of extremism is something almost all people around the world share today, so being able to deal with that in a different genre is interesting and I hope people are open to it. Izer brings very genuine humanity to the universe and everything in it. It will be interesting to see how people respond.