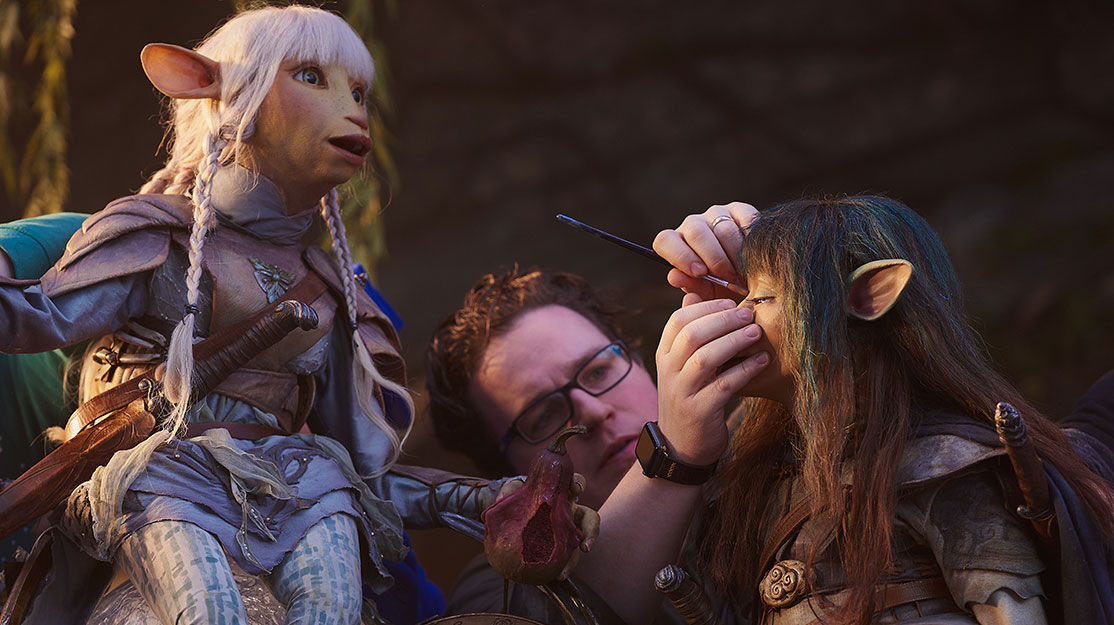 As Netflix series The Dark Crystal: Age of Resistance returns to the fantasy world first brought to life by Jim Henson’s 1982 feature film, DQ lifts the lid on the secrets behind making and working with the puppets that populate the land of Thra.

This is a cleaning job unlike any other. Deep in the crevices of a former kettle factory in the Berkshire countryside, the foam and latex features of an extraordinary turkey-faced monster is being wiped of snot.

It is the messier side of creating a mythical world of dictatorial evil puppets. The puss –made from a mixture of slime and breakfast cereal Weetabix – cakes the features of an evil Skeksis called The Collector who not only favours murder and intrigue but also has a tendency to leave snot all over himself, his food and his friends. He is one of the terrifying baddies in an ambitious new Netflix series based on Jim Henson’s seminal 1982 film The Dark Crystal.

“The snot can get disgusting and start to smell,” admits Toby Froud, design supervisor for The Dark Crystal: Age of Resistance, when he meets DQ at the Henson Studios creature workshop at the company’s enormous Langley Studios in London. “We have to clean all of the puppets as much as we can. We check their heads daily and strip them down and put them back together again.”

Froud, alongside executive producer Lisa Henson, is Dark Crystal family and has garnered cult status as the baby from the 1986 film Labyrinth, which featured David Bowie. While Henson is carrying forward the work of her father Jim – the legend behind The Muppets, Fraggle Rock and Labyrinth – by producing this epic series for The Jim Henson Company, Froud is working with his parents, who helped create the original Dark Crystal world.

His concept artist father Brian envisaged Dark Crystal’s mythological land of Thra with Jim; its landscape is based on his own home in Dartmoor. A book Brian wrote to accompany the film, delving deep into the myths only touched on in the original story, has served as the bible for the new series.

Froud’s mother Wendy is also on board. She helped create the original puppets (and met Brian on the set of the original film) and the pair are working behind the scenes with their son for the series, which will go deeper into this mythical world of kind-hearted Gelflings who can share dreams with each other, evil Skeksis who drain the life force out of other beings and cheeky little Podlings who hate being washed.

While the film was set at the end of the Gelfling civilisation, with the small, friendly creatures almost all murdered by the Skeksis, the 10-part series is set generations earlier, before the epic battle to come. It focuses on three main Gelflings – Rian, Deet and Bria – who all learn that something has gone wrong in the world they know. The Dark Crystal, the source of all life on Thra, which is controlled by the power-hungry Skeksis, is malfunctioning. Separately, they hear about the desperate measures the Skeksis have taken to retain their hold on Thra.

Recreating the world of The Dark Crystal has been a long-held dream for Henson. “I’ve been wanting to do something with this for around 15 years,” she says. “It has been a great passion of mine. The original movie was such a complete fantasy world; it felt like there was a reality to it, a history.’

While filmmaking has moved on so much since the original movie was made, the ethos of the series has been to stick to what is essentially a very sophisticated version of the ancient art form of puppetry. “This is pure puppetry,” insists Henson. “I want people to get excited about puppetry again. The characters are animated from within and that gives a real unity and authenticity to their performances, which makes it different from computer animation.”

To create such a physical world is some undertaking. These puppets eat, they get messy, they fight. All their tools and weapons have been created to be particularly light, while their chairs, houses, tables, food and plates are all puppet-sized.

More than 150 puppets, which have fibreglass structures surrounded by foam and latex, have been created for the show. “Live action from real puppets is something that pushes the whole production,” says Froud. “Creating them all has been a lot of work and it is a constant process. If the puppets get knocked about, they have to be re-skinned and we also re-skin the different heads onto the skull structure to give us more characters. Trying to keep track of all the puppets is one of the hardest things to do.”

In addition, 72 sets have been created, from ornate dining rooms to dank caves, all four feet off of the ground to allow the puppeteers to stand below the set floor with their hands, covered by the puppets, in the air.

“It takes a lot of manpower to make these puppets work; the whole thing is like an iceberg. When you might have four or five puppets on the set together in a scene, you’ve got at least 10 people working underneath them. But we do have a monitor close to us so we can see what we are doing.

“It is like working in a painting because the sets are so stunning. Rian has a wind machine that follows him everywhere. He’s sat around a real fire – there were fire extinguishers everywhere – and seeing the natural light frame his face is just magical.”

Being a Skeksis, which is large enough to have two puppeteers crouched inside it, is an entirely different challenge. It can take 20 minutes just to get in place. “It is like performing in a duvet,” says Sterenberg. “It can get extremely hot in there and you can only do it for an hour at a time. It is particularly challenging because you have no vision at all of what is going on; you have to depend on a monitor to show you where you are going and what you look like.”

For scenes featuring both Gelflings and Skeksis, the staging is even more complicated. The flooring for the Skeksis is two feet lower – which is why you won’t see many full-length scenes with them all together. That is where CGI has been brought in – for full-length action scenes, action that shows the puppets running and also, on occasion, for hiding puppeteers.

The Dark Crystal film was a hit from the start and, for many fans, the return to this world — the series drops this Friday – is a landmark event. The top-notch cast, all fans of the original, includes Sigourney Weaver, Helena Bonham Carter, Nathalie Emmanuel, Mark Hamill, Lena Headey, Taron Egerton, Eddie Izzard, Simon Pegg, Toby Jones, Mark Strong, Alicia Vikander and Natalie Dormer.

For puppeteers like Sterenberg, who has previously worked on Star Wars, the return to the world of Jim Henson is nothing less than a dream come true. “The Dark Crystal is a film I would watch over and over again,” he says. “I was inspired by the beauty and artistry of the puppetry to enter the business. Even now, when I am in a room full of Skeksis, I think, ‘How did this happen to me?’ To be in something that inspired me is incredible.”