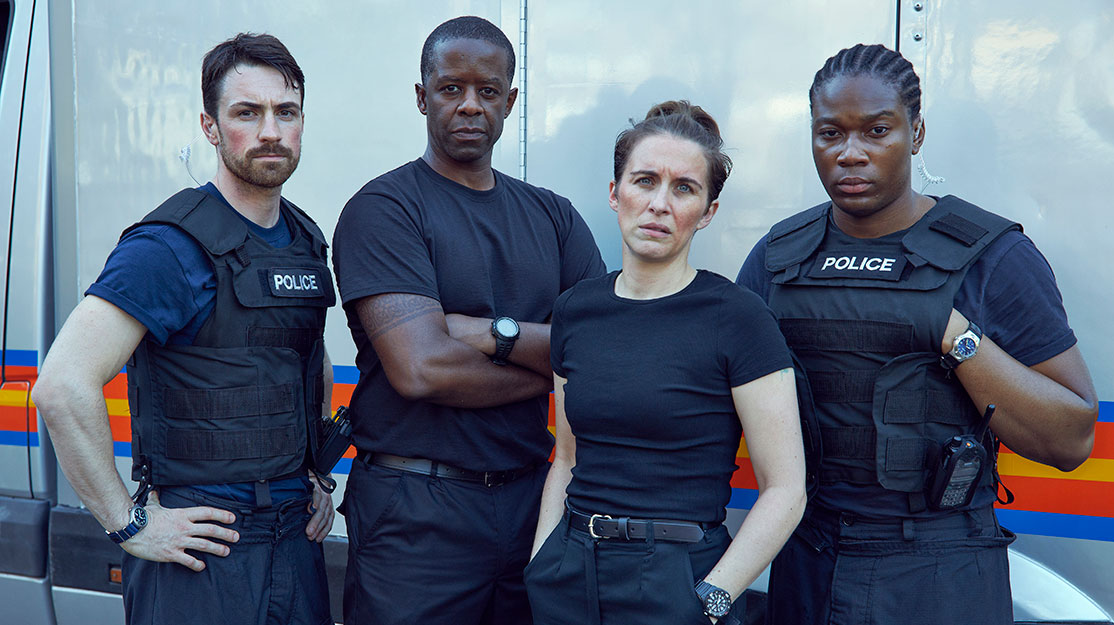 Writer Daniel Brierley, producer Julia Stannard and executive producer Jed Mercurio reveal how they hope to hit the target with ITV’s explosive thriller Trigger Point, which follows a team of bomb-disposal operatives standing in the face of a terrorist campaign.

As the creator of Line of Duty and Bodyguard, Jed Mercurio has built a reputation for a certain style of thriller – one with twists, turns and enough tension to keep viewers on the edge of their seats.

Now as an executive producer through his production company HTM Television, Mercurio is working with screenwriting newcomers who want to tell their own action-packed stories, first with Chris Brandon on Bloodlands and now with Daniel Brierley on an explosive six-part thriller called Trigger Point.

The series reunites Mercurio with Line of Duty star Vicky McClure, who plays the lead role in a show that turns the spotlight on counterterrorism policing and the work of London’s Metropolitan Police Bomb Disposal Squad.

McClure stars as front-line officer Lana Washington, who is an experienced bomb-disposal operative, known as an ‘expo,’ opposite Adrian Lester (Life) as Joel Nutkins, who works alongside her. Both ex-military, the pair are close after serving together in Afghanistan. When a terrorist campaign threatens London over the summer, the expos are placed at the forefront of urgent efforts to find out who is behind the bombings before fatalities escalate.

Brierley first learned more about the work of expos during a late-night trawl through YouTube, when he came across a BBC documentary called The Long Walk, which focuses on bomb-disposal operatives working in Northern Ireland in the 1970s.

“I’ve always been fascinated by the mindset of people who approach danger, people who run towards the problem rather than away from it, because that’s counter to all our human instincts,” the writer tells DQ. “I thought it was a really fascinating jumping-off point for drama. It’s a paradox because it’s against human nature to walk towards something that’s going to kill you. For me, exploring what kind of people do that job was really interesting.”

Brierley started working with Mercurio as part of the ScreenSkills New Writers Programme, which matches up-and-coming writers with established mentors with an eye to getting new talent commissioned. Trigger Point is the result of their partnership.

“I would come up with ideas and Jed would tell me how bad they were and tell me to stop wasting his time and come up with decent ideas,” Brierley jokes. “Jed’s a wonderful sounding board and he’s a wonderful person to really help you hone an idea into an actual story.”

Mercurio had spoken to a number of writers but chose to work with Brierley “because he had the best idea,” he says. “It was one of those classic situations where you thought, ‘This show should have been made. I can’t believe there hasn’t been a bunch of shows like this already,’ so it was just an incredibly exciting opportunity.”

Brierley wrote a pilot script with supporting feedback from Mercurio that was worked up until it was strong enough to take to ITV. The broadcaster then greenlit the series, which was first announced in February 2020 and was filmed last year. It launches this Sunday.

“It’s very much Daniel’s show. Daniel writes like Daniel, he doesn’t write like me, and my role as an exec producer is to give notes the way any other member of the editorial team would,” Mercurio explains. “It’s a collaborative conversation. The fact is I have a particular style in thrillers, but what that also reflects is the kind of thrillers I admire. I was just working with Daniel to create the kinds of scripts that would give us a foundation for the kind of thriller I would watch and I would admire.”

Once the scripts were progressing, producer Julia Stannard (Vanity Fair, War & Peace) came on board to take the project to the next level alongside directors Gilles Bannier (Marcella) and Jennie Darnell (Line of Duty).

Stannard’s agent had sent her the script for episode one, which she says she couldn’t put down. “It was so gripping and I just thought, ‘If I can’t stop reading it, I know what a brilliant piece of drama that’s going to be.’” She could also foresee how tough production would be, considering the show’s subject and the scenes that would play out, “but conveying that level of excitement, engagement and tension throughout an ITV hour of drama is just another challenge and I knew it was [a risk] worth taking.”

The first episode of Trigger Point is a nail-biting exploration of tension as Lana and Joel are called to a residential tower block in London to investigate a suspected bomb, while police officers on the ground struggle to keep curious residents away from the scene. As the bombing campaign wears on through the episodes, the series also drills into the impact of post traumatic stress disorder (PTSD) and how Lana in particular continues in the wake of a devastating event in the first instalment.

“Lana is such an involving and evolving person. Throughout the first season, she’s really finding herself,” Brierley says. “We obviously have the storyline of who’s responsible for the bombings but, at the same time, we’re really exploring what it means to Lana and what the events of episode one mean to her. How does she deal with this? How does she keep going? How does she continue to do her job?”

“One of the arguments about why you would become an expo is you have to be army trained, it’s the only way in,” says Stannard. “So to a certain extent, are expos already suffering some degree of PTSD in order to be able to do that job? I’m not saying that’s the reality, but some expos will tell you that’s a possibility. There are fascinating psychological issues we gradually unpack through the series.”

As you might expect, there’s plenty of explosive action throughout the series, with Mercurio noting that Trigger Point rests on two fundamental elements of television thrillers: jeopardy and mystery. “The jeopardy is built around bombs. Will they blow up or will the team led by the expos stop them? And the mystery is where the next bomb is going to be and who’s behind the plot,” he says.

But nothing in the series strays too far from what would happen in similar situations in the real world. A real-life expo who worked with Mercurio on Bodyguard supported Brierley in the writing stage, while help was on hand every day during filming on location in London.

“Every day we had an explosion, we had an expo there to advise,” Stannard says. “It’s not just about the bombs themselves, it’s about protocol and etiquette. What do you do? What kit would you wear? How would you interact with your team? It’s such an interesting and specific world that we wanted to show it properly.”

The production team also talked with a retired senior policeman from the Met who advised on all issues relating to SCO19, the Met’s specialist armed police unit, and its SO15 counterterrorism command. In addition, the production brought on board a consultant psychologist who works with police officers dealing with the impact of trauma in their work.

McClure joined the project around the same time ITV confirmed its own interest. In fact, she was the first name they discussed for the role of Lana and Mercurio said he would ask her about it.

“I texted her and she said in principle she was interested. I was concerned maybe she wouldn’t want to play another character in uniform and would maybe want to move away from anything that might even have the tiniest crossover with her role in Line of Duty,” he says. “But she said she’d love to read the script and she just responded to it straightaway. Then it was just a process of working with her.

“She’s the most natural actor. She’s always looking for authenticity. She wants it to feel like it’s the real world, and she brings that with her in terms of being on set and being the star. She’s incredibly hard working. It’s tough making TV dramas, and when you’ve got a star who everyone can see is working their socks off, day in, day out, it sets a fantastic example and it keeps morale up. She is a great leader on site. I can’t praise her enough.”

When it came to shooting the series, Stannard admits it would have been easier and cheaper to film Trigger Point anywhere other than London. But to achieve the ambition and the high stakes Brierley targeted at the outset, the production quickly committed to filming in the capital.

“That was before the pandemic, which did not help us,” she continues. “We were also working at a time when there was a massive backlog of production. You were in competition for every location and every crew member, and it was tough. I’ve worked on a lot of ambitious shows – War & Peace springs to mind – but this was really hard and really demanding. But it was a great script, we had a wonderful cast and we just felt a real pressure and responsibility to deliver on that ambition. We didn’t compromise in terms of specifics or the accuracy of the world we were portraying.”

That accuracy even spread to the real people used in crowd scenes – not extras – while almost every explosion in the series was shot in camera. “One was at a location we couldn’t possibly blow up, but the rest of them are real in-camera explosions and the better for it, to be honest,” Stannard says. “The element of surprise you get, it’s real. We had one take and we had to get it right.”

The whole series was also shot on location, with no studio work at all. “That adds again to the atmosphere of reality,” the producer adds. “Unfortunately, these things happen. They’re happening all the time and we wanted to convey that reality, that tension, that pressure in the world. Everything you see is as real as we could make it.”

Now he’s seen the series, Brierley says the whole process is “very surreal. It still feels like a dream.” He continues: “Everyone’s done such an amazing job and everyone’s worked really hard on it. As a writer, you’re in your little room in your own world and you forget every action has a consequence. You’ve written these things and then someone’s got to go out to a housing estate in north-west London and shoot it. It’s wonderful to see in reality and I can’t wait to see what the audience makes of it.”

Having worked with Brandon on Bloodlands and now Brierley on Trigger Point, Mercurio is also mentoring screenwriter and Line of Duty actor Maya Sondhi. The pair are collaborating on a four-part crime drama called DI Ray, which has also been commissioned by ITV and will star Parminder Nagra (ER) in the title role.

“I’m just a big fan of TV and it’s great there are new voices breaking through,” he says. “I have this career, which I feel very fortunate and privileged to have, because people took a chance on me. I hadn’t really written anything and some people saw some promise in my writing and they worked with me and they helped me. I’m very grateful for that and I’m passing that on.