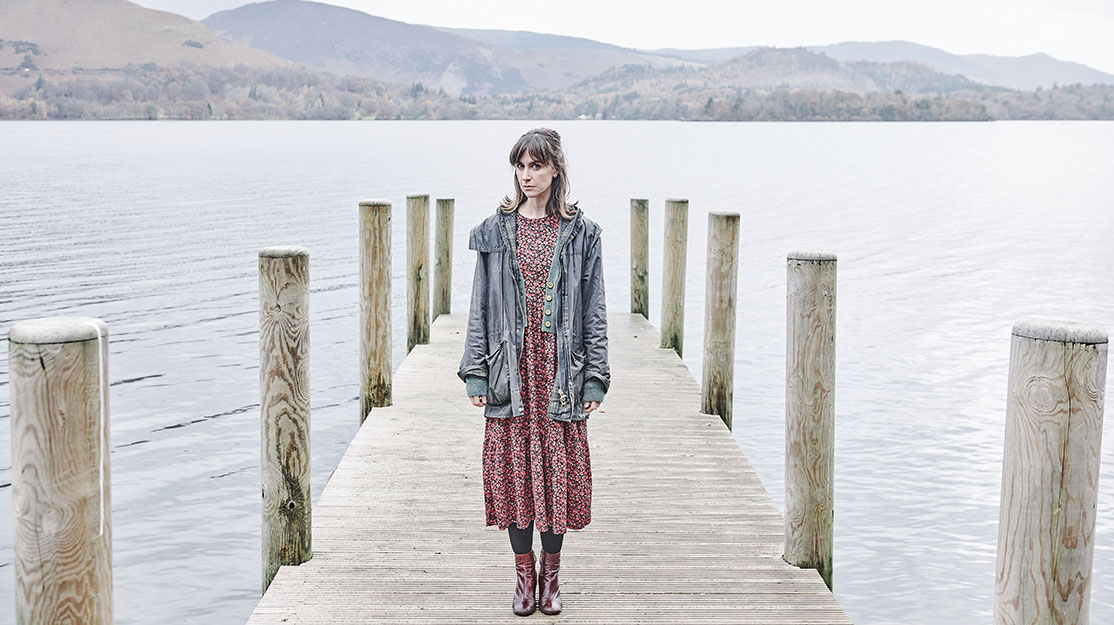 As ITV drama Innocent returns for a second season, the cast and creative team discuss its themes of separation and connection, filming in the Lake District and finding a character’s smell.

When writer Chris Lang was a child, he would have nightmares about being separated from his family and then coming home to a mother and father who no longer recognised him. It’s that same feeling of separation and loss of connection that informs the concept behind his anthology drama Innocent, which returns for a second season on UK broadcaster ITV tonight.

Season one, which aired in 2018, starred Lee Ingleby (The A Word) as a man who is cleared on a technicality after being convicted of murdering his wife, leaving viewers to find out the truth behind the killing.

In the new season, however, viewers know from the off that the central character is innocent. It focuses on teacher Sally (Cheat star Katherine Kelly), who is acquitted of killing 16-year-old schoolboy Matty five years earlier amid rumours of a relationship between the pair.

On her release from prison, Sally returns to her home town of Keswick in the picturesque Lake District determined to prove her innocence after losing her home, job and marriage to probation officer Sam (Jamie Bamber), who is now on the verge of tying the knot with Karen (Priyanga Burford). With Matty’s parents John (Andrew Tiernan) and Maria Taylor (Lucy Black) still living a nightmare, Sally sets out to help the police uncover the truth as DCI Michael Braithwaite (Shaun Dooley) launches a new investigation to find the killer.

“We started with wanting to tap into a similar visceral sense of dislocation that Lee Ingleby captured in the first season,” says Lang, who created the series with Matthew Arlidge. “He’d been in prison and he lost his wife and he lost his livelihood. We wanted to find something that was similar and as emotionally compelling. We also wanted to mix it up and tell a story from the point of view of a female protagonist.

“We settled on the notion of losing the love of your life, even though they’re alive and well and they’re living in the community that you grew up in, because it felt like such an astonishingly powerful emotional loss when you’ve done nothing wrong. It tapped into some very primal fears. This person’s got a whole new life now, and while your life has stood still, theirs has moved on.”

Lang, who is also the writer behind hit ITV crime series Unforgotten, says it was a “very deliberate choice” to confirm Sally’s innocence at the start of the four-part drama, wanting to avoid repeating the same did they/didn’t they structure from season one.

“When you’re doing a formatted show like this, lots of things are similar but the content within it all has to be very different,” he says. “A phrase I use for Unforgotten is ‘The same, but different,’ which means you give the audience what clearly was appealing but then you change everything else, and it felt like that was one of the things we should do. We should eliminate the potential of her being guilty really early on so the audience go, ‘OK, well, this feels different already – let’s start casting our gaze elsewhere.’”

Pre-production on the series began in December 2019, with a start date set for March last year. The pandemic then meant filming had to be delayed until August, but before shooting could commence, every actor had to spend 14 days in quarantine on location in Dublin.

“Then on the 15th day,” producer Jeremy Gwilt says, “they could meet Tracey [Larcombe, director], me, costume and make-up and, on the 16th day, start working. That was also true for our day players. We had a number of actors who came in literally for one day and had to go through that whole regime. We were extremely fortunate to be able to hold our wonderful cast together. There was a passion to get the thing done, and that’s what pulled us through all of those challenges and constraints.”

“It was nerve-wracking, but we had a lovely [first] day when everyone was released because we started in the police station for the first couple of weeks, so that was a nice controlled environment – as controlled as it could be,” continues Larcombe. “The first day felt quite comfortable. We were all really nervous but we had half a day rehearsal, which was really lovely. I got everyone [from the CID team] together and we went through it all. They’d worked so hard in quarantine and rehearsed so much over Zoom that we didn’t really need to do much. They were already a team; they were already cohesive and it was like we were ready to go. It was amazing. And astoundingly, everyone was word-perfect.”

For Dooley (The Stranger), returning to work in the pandemic was “utterly petrifying,” not only because he didn’t know how the set would run but also due to coming back to acting after several months at home. “We were all going, ‘What if we forgot? What if we can’t do it anymore?’” he says. “Weirdly, the two-week lockdown really galvanised us as a group because it was like we were all going through the same thing together. We meticulously pulled apart the investigation within the script and got everything in our brain so we knew where everything came from.”

By the time Kelly joined the rest of the cast for filming, all the CID scenes had been completed. Sally never appears at the police station, with numerous scenes featuring the character surrounded by nature as she comes to terms with her newfound freedom.

“What I love about Sally’s character is she’s very forward-thinking,” Kelly says. “She doesn’t really talk much about what happened unless she’s pushed. She very much wants to get her life back. But because she doesn’t talk about it very much, the audience really has to feel and believe at all times that this human being has spent five years in prison.”

In preparation for the role, Kelly read books and watched documentaries related to Sally’s experience. She also spoke to Larcombe about how the character might return to society amid continuing rumours of her affair with a schoolboy and consequent press interest.

“I just wanted you to feel that she really had been traumatised, but she wasn’t going to be held back. She’s got a steely strength to her – she’s here to reclaim her life,” Kelly adds. “I wanted to make sure that was always there, but not in a ‘poor me’ way. She was just grieving for a whole part of her life that she’d missed.”

Bamber (Marcella) hadn’t seen the first season of Innocent, living in France when it was first broadcast. It meant he could come to this new story and his role as Sally’s ex Sam with fresh eyes.

“It’s a quietly told story. It doesn’t seek to do what a lot of television drama does, which is smash you around the head in the first five minutes and then do it again three times every hour,” he notes. “The truly remarkable thing about it is every single character is in an impossible position. That’s really rare in dramas. The title is obviously brilliant because nobody in it is innocent. There is nobody who isn’t in turmoil.”

Sam, he says, is suffering a massive identity crisis after failing to stand by Sally and later discovering she didn’t commit the crime of which she was accused.

Meanwhile, Burford (Press) believes a strength of the series is how each character’s separate storylines build a sense of community, slowly revealing how they are all connected.

“It’s wonderful in that way,” she says. “I feel like you meet Karen and Sally at the top of a slope and then it’s like a rollercoaster – it goes down and twists and turns and all sorts of things happen. They are both in this terribly difficult whirlwind of a thing where they are being hit from all sides with different pieces of information, which they have to take in and absorb very quickly. In Karen’s case, she doesn’t deal with that very well at all.”

“The thing that drew me to Mike was I’d never read a DCI who was as layered as he was,” Dooley says of the detective entrusted with finding Matty’s real killer. “Often I feel they are just serving a purpose, and I felt like Chris and Matt brought a real human being into the centre of the investigation side of the programme. I’ve never seen a detective so obsessed with empathy, in the way he goes about his investigation and the way he treats individuals. I completely fell in love with him. He’s one of my favourite characters I’ve ever played.”

To get into character, Burford built a 1990s indie playlist that best represented Karen, while Dooley continued his long-time tradition of choosing a new aftershave to represent Braithwaite.

“The first thing I do when I’ve got a character is I go out and I find their smell,” he reveals. “What’s lovely about it is it’s a way of analysing the character, so Braithwaite is not overly masculine. He doesn’t want to overpower anybody with who he is as a human being – it’s a very nice, clean smell and very one-tone. That was him. That’s how I find a character and then I go out and find that smell. He is a Versace man. It’s just a way I can then put that on just before a take and flip my mind back to the essence of who the character is.”

With filming for the show’s Lake District setting completed both there and in Ireland, Lang wanted to place Sally in a close-knit community where everyone would know each other and their business. But the wide-open spaces those locations offered also gave Sally – and the story – room to breathe, particularly early on after her release when she climbs a hill just to take in the stunning scenery.

“When we got to the Lakes, we really made the most of the time we had there,” Kelly says. “It was everything we hoped. When Sally is stood taking it in, it felt like it gave perspective to Sally and her character and how brief life is, and how she wasn’t going to dwell on those five years [in prison] because time is so precious. There isn’t much left of it and she wants to get on with her life and drink it in as much as possible.

“We also discussed the fact that all Sally’s senses are coming back to life and you should feel like she’s blossoming before your very eyes. The fact that it was really cold [helped to deliver the sense that] she actually can feel things again. It was perfect for that character.”

While Innocent’s format means the series can continue to be told with new characters and new stories, Lang isn’t assuming a third season is on the cards. Instead, he’s waiting to see how the audience reacts when the show, produced by TXTV and distributed by All3Media International, begins tonight and airs over four consecutive evenings.

“I would hope most of the things that I write have that element of ‘there but for the grace of God go most of us,’” he says. “I’m interested in writing about people who are not monsters, but who are weak and fallible and sometimes make dreadful mistakes. In the world in which we live right now, we’ve got to be able to reach out more and show understanding and compassion.”