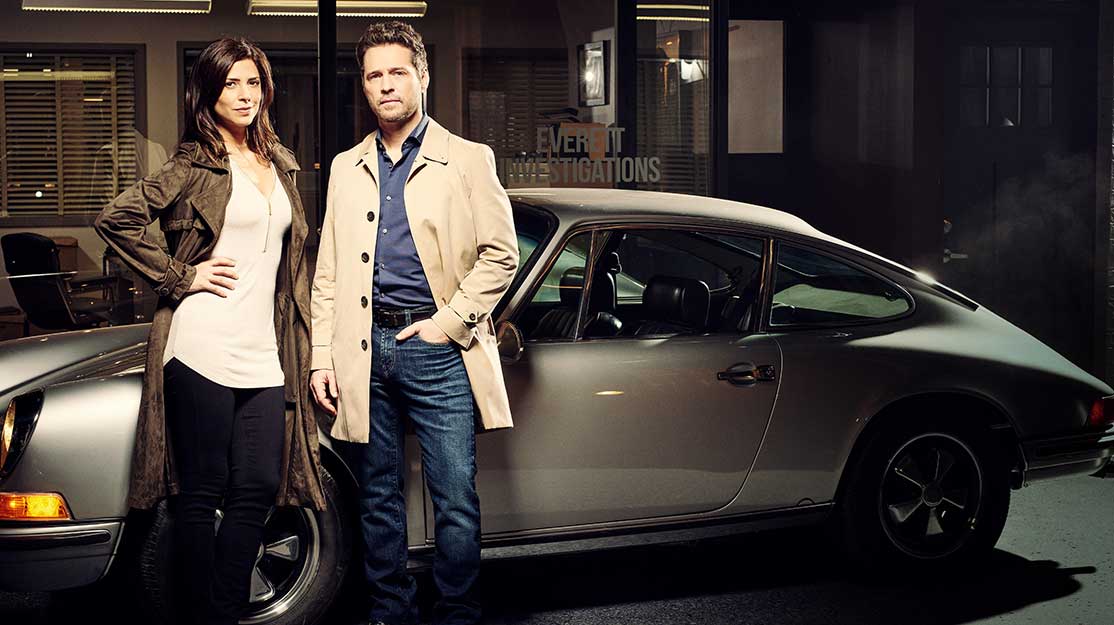 Jason Priestly and Cindy Sampson team up as a pair of private investigators in Canadian drama Private Eyes. Michael Pickard tracks them down.

They’ve teamed up to play a pair of private investigators who carry out covert operations at the request of their clients.

But when DQ finds Jason Priestly and Cindy Sampson sitting together on a beachside sofa in Cannes, they’re anything but undercover. Laughing loudly at each other’s jokes, they’re supremely at ease and riotously enjoying one another’s company – a quality that also comes across on camera in the early teaser trailers for their new crime drama Private Eyes.

On the ice, Shade learned how to hustle, read people and anticipate their moves. Working with Angie, he’s found a new home where his skills still matter. Meanwhile, Everett – straightforward and clever – has taken over her father’s PI business after his death and strives to keep his legacy alive.

“He’s the flashy ex-hockey player with the celebrity status,” Sampson explains. “Angie doesn’t suffer fools, she has no time for that and is a workaholic so there’s some friction in the beginning but eventually she opens up her life and her business and they become partners by the end of the first season.”

Traditional crime procedurals – from which Private Eyes takes its cue – have fallen out of favour in the US over recent years as serialised stories have taken priority for broadcast and cable networks and streaming platforms. But Priestley believes there’s still a place for case-of-the-week series, with demand for episodic content particularly high across Europe.

“Detective shows have been around for a long time and people always seem to respond well to them,” he says. “We grew up on a steady diet of shows like Moonlighting and Heart to Heart (both of which feature male and female co-leads) and this show is a homage to programmes like that – just with a much more modern storytelling technique.”

Priestly needs no introduction. Growing up on camera in various bit-part roles, he shot to fame as Brandon Walsh in Beverly Hills, 90210 – the Aaron Spelling-produced soap that ran on Fox for 10 seasons until 2000. More recent credits include Canadian comedy Call Me Fitz and a recurring role on Syfy’s Haven, among numerous cameo appearances in shows produced on both sides of the US/Canada border.

“I was attached to the show from the very beginning of the development process,” Priestly says of Private Eyes, which launches on Global TV today. “I was involved right from the get-go and it’s been about three years. We had an exhaustive search to find our Angie and luckily we found Cindy in Toronto. We looked everywhere – New York, Los Angeles, Vancouver; we looked everywhere and found Cindy in Toronto, which was very lucky for us. We clicked right away.”

Sampson, who came onboard in August 2015, continues: “I did a screen test, a chemistry test, so I read with (Priestly) in a room of 40 people. We had a good laugh and then it all happened really quickly. We went into fittings and started shooting in the middle of September. We wrapped 10 episodes in February.

“There are a lot of lines to learn. We did a lot of talking! And being in every scene… It was amazing though. We had so much fun doing it. It didn’t feel like work.”

The pair didn’t know each other before partnering for Private Eyes but Sampson – whose credits include Rookie Blue, Supernatural and Rogue – says they instantly connected through their shared sense of humour.

“That helps when you spend 24 hours a day with someone for six months,” she says. “It really helps when you have to eat three meals a day with the same person. We hear that other people don’t get along so well but we’ve been pretty fortunate. We had a good time. So many times you work on projects and the finished result is great but the experience maybe wasn’t great.”

Priestly adds: “We’ve been having a really good time and hopefully it comes through in the show and people enjoy watching it.”

The 10-episode season, produced and distributed by Entertainment One, has been written by showrunners Shelley Eriksen (Continuum) and Alan McCullough (Rookie Blue), who gave their stars plenty of room to embody their characters beyond the lines on the script.

“We had quite a bit of latitude (with the characters), which is good because things would change on a daily basis,” Priestly reveals. “Things would evolve while we were shooting, so it was exciting. A lot of those changes came out of the fact that everyone was always working to make the show better.”

Sampson adds: “And once we got into the groove of our characters, things were evolving because of that too. It was like a living, breathing thing.”

The production wasn’t without its challenges, however, and both Sampson and Priestly recall one particularly cold day shooting on board a ferry.

“The day on the ferry was coldest I have been in my entire life,” Sampson says. “There were tears rolling down our faces and we’re trying to pretend it’s a nice fall day. There were tears non-stop!”

Priestly adds: “We shot an episode on Toronto Island – it’s not a place many people go or know about. It’s a beautiful island just in Lake Ontario and you have to take a ferry to get there (from the main city of Toronto). They shut down the ferry in the winter, and we were on it on the last day it was in operation before winter. And there’s a reason they shut it down – because it’s so fucking cold. It was the coldest I’ve been in a long time.”

Priestly now splits his time in front of and behind the camera, having first climbed into the director’s chair more than 20 years ago for episodes of 90210. More recently, he’s helmed episodes of medical drama Saving Hope and forthcoming horror Van Helsing – and he says the new opportunities that emerging streaming services provide mean it’s an exciting time to be working in television.

“There’s been a lot of qualitative improvements in television, certainly since I started my career in the 1980s, like the way we shoot television now,” he notes. “When I started, we shot on film. Film is dead. The way we light television now is different. We use LED lights as opposed to the old acetylene lights.

“The technology has impacted the way we do it in myriad ways. But also the fact the special effects are so readily available now. The use of green screens and the things you can do without green screens, the opportunities to be creative are so much greater now than they were even 10 years ago. The landscape has evolved and continues to evolve every day.”