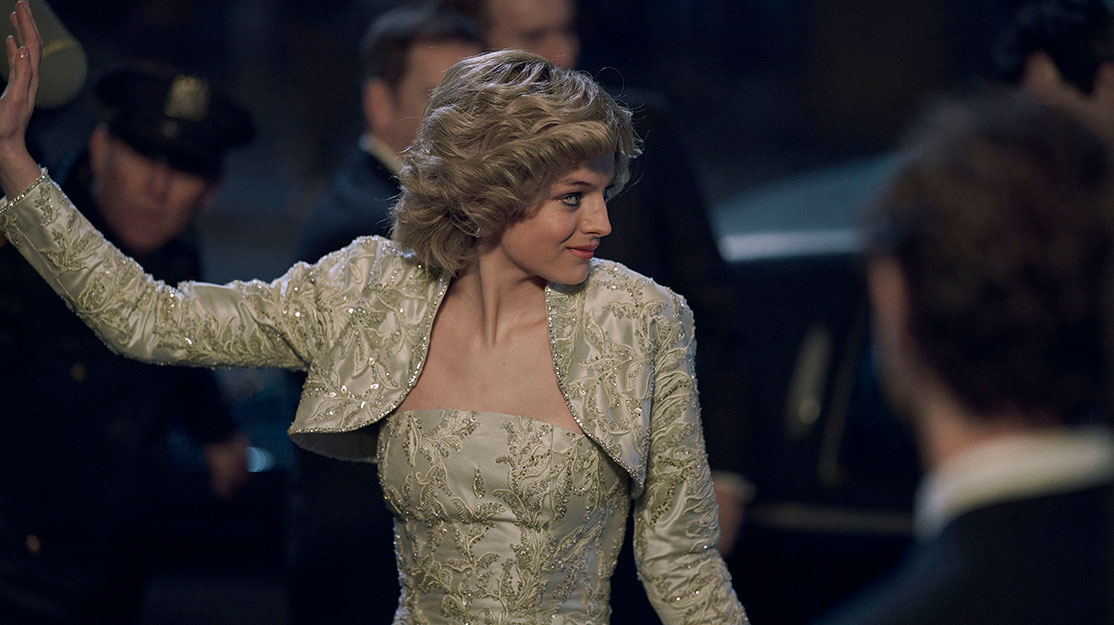 Director Jessica Hobbs discusses her role on Netflix’s royal drama The Crown and breaks down her work in season four finale War, for which she won an Emmy award.

When DQ catches up with Jessica Hobbs, the director has just returned from Spain, where she was shooting scenes for season five of Netflix’s acclaimed UK royal family drama The Crown, and is now bunkered down in an editing suite cutting the first two episodes.

It means Hobbs has had the honour of being the first director to work with the third iteration of the show’s revolving cast, which is now led by Imelda Staunton in the role of Queen Elizabeth II, who was previously played by Claire Foy and then Olivia Colman.

“It’s challenging but the new cast are fantastic,” Hobbs says. “We’ve done it once before on season three, so we’re aware of the challenges. But it’s always a leap for the audience. There’s a bit of grieving for the people who were playing those roles, and we need to help them fall in love with the new representations of them. But it’s also really exciting what they bring. There’s a maturity and a complexity as they get older, which I’m really enjoying.”

Having helmed the final two episodes of season four, as well as episode seven, it seems Hobbs has had little time off from the series, save for a night in September when the cast gathered in central London to watch the Emmy Awards. The show was nominated in 24 categories and subsequently took home 11 awards, including best drama series. Hobbs won in the directing in a drama series category for the season four finale, War.

“I don’t know if it has properly sunk in, to be honest,” she says. “I was very surprised. I don’t think anyone expects to hear their name, do they? Maybe some people do. I certainly didn’t. Then it was straight back to work next day.”

The New Zealand director has worked on legal drama The Split and thriller Apple Tree Yard, as well as crime series River and Broadchurch, but says joining The Crown in season three was “quite overwhelming.”

“My question to them was essentially, ‘Why me? What is it that you’re seeing in my work that you think I can contribute?’ and it ended up being an incredible fit,” she says, praising the support of executive producer Suzanne Mackie and series creator and writer Peter Morgan. “They were very interested in the way I worked as a director and the way my work spoke to them. They felt it could be a really interesting fit – and it was.”

Morgan initially gave Hobbs a choice of episodes to direct, and as well as working with Colman and Helena Bonham Carter (Margaret) in episode 10, Cri de Coeur, she was particularly drawn to episode seven, Moondust, which followed the royal family as Apollo 11 landed on the Moon in 1969. The episode sees Philip (Tobias Menzies) confront his own life as the Queen’s consort and clash with a group of priests after he stops attending church.

“It was very personal to me. My dad was in the seminary for about four-and-a-half years and he always talked about that when we were kids, his crisis of faith and what happened to him when he decided he didn’t want to stay,” she reveals. “His sister was a nun for 12 years, so it was a very strongly Catholic family, and she also left. But I’ve grown up around those conversations about the difficulties of maintaining faith. I had been staunchly anti-Catholic. I couldn’t see a place for women in the church, but I felt that really spoke to me.”

The episode would also be the first time Hobbs confronted an ongoing challenge with The Crown – injecting tension into an event the audience would already be familiar with. In this case, it was the jeopardy surrounding the ultimately successful Moon landing.

“But one of the things I discovered about the show is Peter’s writing has incredible depth to it, and it reveals itself to you very slowly as you do the scene,” she says. “Even in the edit, you keep discovering more possibility in the work. That’s really why I wanted to stay on it. I found the strength of the writing was extraordinary in terms of taking a very big, hard to pinpoint, almost esoteric idea or theme, but showing it through this incredibly personal journey, which for me is what you want to achieve when you’re watching something. You want to have that transcendent experience. That was not something I ever expected to feel about watching a show about the royal family.”

As The Crown has charted the life and reign of Queen Elizabeth II, season four was particularly notable for the introduction of two key figures in recent British history. The season took place between 1979 and 1990, marking the rule of the UK’s first female prime minister, Margaret Thatcher, and also dramatised the meeting and ensuing turbulent relationship between Prince Charles and Diana Spencer, their wedding and their tour of Australia.

Discussions about how the season might be filmed began while season three was still in production – Hobbs jokes that Morgan is already calling her about season six – and naturally centred on the “triangulation” the three women – Elizabeth (Colman), Thatcher (Gillian Anderson) and Diana (Emma Corrin).

“Sometimes Peter would express it like, with Diana, a pathogen enters the [royal family’s] house and they welcome it openly. It’s their virus, I guess,” she says. “We all looked at what that might do, the pressure cooker that they felt, how everything looked perfect on paper when she came into the family. Our job was to build that unsettling tension.

“The other thing we talked a lot about is how the public all over the world just grabbed on to [Diana]. For any person, let alone someone like Charles, who’s already spent most of his life in the waiting room, that would have been pretty tough. It was about how we reflect that and then how it starts to separate them as a couple. The War episode was really the culmination of all of that.”

As the episode title suggests, War brings to a head storylines involving all three women. Thatcher is dethroned by a leadership challenge, while Diana is left under no illusion about who is really in charge following a message delivered by Philip, who similarly married into the Royal family and learned to live with his role serving the Queen.

Hobbs found that the complexities of the episode boiled down to how those stories sat alongside each other, so how should the story – which follows a real timeline – move between the characters without feeling too bumpy?

“I wanted to reflect the isolation of each of those three women and how differently they coped with that,” the director says. “The anxiety and fear for Diana and her need to be seen by the public, the Queen’s need for solitude, peace, breath and her discomfort with emotionality, and the idea of Thatcher almost being hoisted by her our own petard.”

In the final meeting between Thatcher and the Queen, “I loved the uncomfortableness of the ending. There was nothing left to say,” Hobbs says. “Thatcher just walked away, and she [Anderson] did this beautiful thing where she just half looked back. That was a very challenging relationship for both of them.”

Thatcher’s outgoing speech in Downing Street is just one moment in the episode that viewers may remember from real life. Another is Diana’s solo trip to New York – filmed for The Crown in Manchester and London – which cemented her global appeal as her marriage continued to falter.

“I lived in New York for a number of years, so I know it really well,” Hobbs says. “I knew the areas we were supposed to be recreating, and I was incredibly anxious. But when they came back with those initial photographs from [locations in] Manchester and I looked at a lot of American films that have been shot there, I thought it could really work and I was really proud of what we pulled off.

“There’s an opening sequence in New York where you see a lot of the traffic, and we were able to close off a whole avenue in the city. Being able to do those kinds of things, I feel, visually earthed the audience into believing where they are. We’ve got a great visual effects team, so I knew that we could put Central Park outside her hotel window, and we shot that in central London. You’ve just got to be creative in the way you approach it.”

Perhaps the most important part of the episode is the ending, when Diana joins the family for a Christmas photo, standing at the back and slightly isolated from the rest of the royals. That feeling was heightened by having Diana join the family festivities late and everyone ignoring her when she does arrive.

“She looks stunning, but they don’t even see the problem in their future,” Hobbs says. “I was trying to find a way to visually represent how that young woman felt. We tried to do it in quite limited time, but also I spoke to Emma and said, ‘This is what I’m trying to achieve emotionally.’ She was like, ‘Right, got it.’ And I thought she was astonishing.”

One of the reasons Hobbs has found herself drawn back to The Crown is the show’s “extraordinary global reach,” coupled with its ability to tell “unexpectedly moving” stories. “When I first sat down to watch The Crown, I thought, ‘Oh, I’m not going to like this. I’m not a royalist. I’m not really into the monarchy. This is going to be boring.’ And literally it started and I saw John Lithgow as Winston Churchill and just thought, ‘That’s genius.’ I was hooked from that moment on.”

By retelling history through focusing on the British monarchy, the Left Bank Pictures series has tapped into the endless fascination people around the world have with the family. “It’s probably also one of the best-produced shows I’ve ever worked on, so there’s enormous support for you creatively,” Hobbs adds. “It’s a really fun job, and we get great results. I’m really proud of the stories we’re telling.”

Now as Hobbs returns to work on season five, which is due to launch in November 2022, the continuing challenge of filming real events still lodged firmly in the public consciousness grows with every episode.

“Particularly with Diana, we know what’s coming,” says Hobbs, who is represented by Casarotto Ramsay. “It’s getting trickier to walk that line. There was a lot more latitude and perhaps openness and forgiveness for the early seasons. This is a harder thing, but I also think the closer we get to the more difficult stuff, the more enticing it is for an audience.”