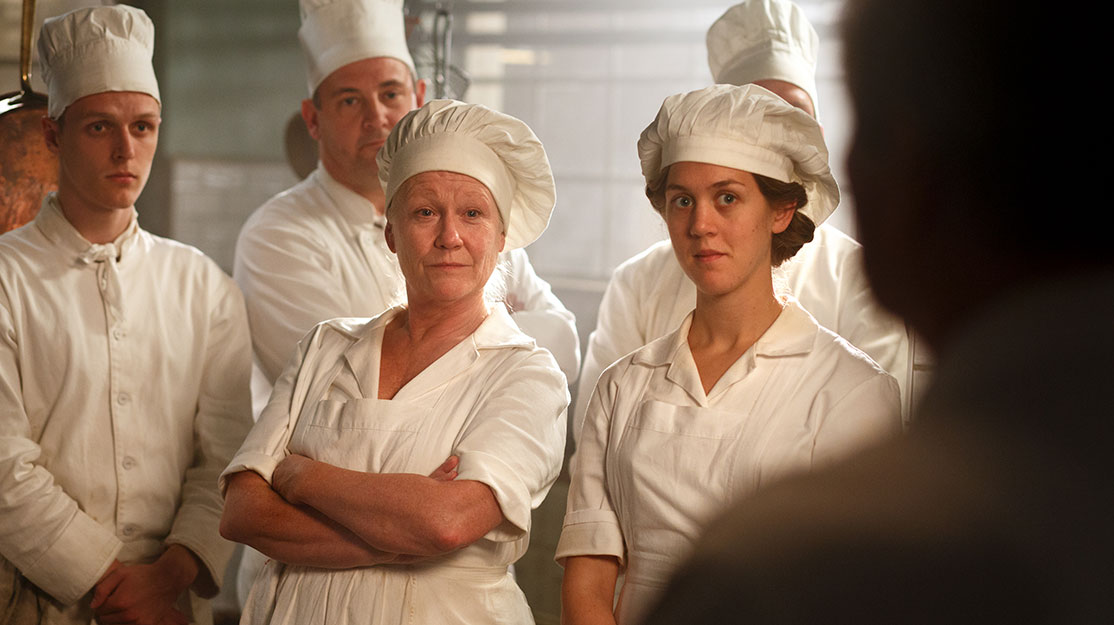 This autumn, Swedish pubcaster SVT is serving up what it describes as one of its biggest drama productions ever. DQ hears from head writer Ulf Kvensler and director Harald Hamrell as they prepare to launch Vår tid är nu (Our Time is Now), known internationally as The Restaurant.

In the clamour to make their dramas stand out from the crowd, broadcasters often resort to increasingly hysterical hyperbole. Some are labelled groundbreaking, while others might be variously described as cutting edge, thrilling, subversive, twisted or simply as a landmark in scripted television – at a time when every other commission is for an ‘event series.’

But when Swedish pubcaster SVT describes its forthcoming period drama Vår tid är nu (Our Time is Now) as one of its biggest drama productions ever, this is no understatement.

In fact, the series, which has been renamed The Restaurant for international audiences, is as brave, bold and ambitious as they come. A sprawling ensemble drama that opens in the aftermath of the Second World War and runs across two decades, it is an emotion-filled family saga that charts the fortunes of the owners and staff of Djurgårdskällaren, a high-end restaurant in the heart of Stockholm.

It could also be described as a state-of-the-nation drama, but one that examines contemporary Swedish society from the perspective of the post-war years and through the emergence of the country’s welfare state.

Recognising the potential scope and scale of the project, SVT gave the show an initial 20-episode order, to be split across two seasons that will air this autumn and in 2018. Season one begins on Monday, October 2.

“It is huge,” admits director Harald Hamrell. “We do 20 hours, it’s a big budget. That means we could build a huge set for this restaurant. We had the money to do the things we wanted but, of course, you have to be careful as well when you’re spending money.”

The Restaurant is created by head writer Ulf Kvensler, Malin Nevander and Johan Rosenlind, with the latter initially developing the series based on his own experiences in the restaurant business. SVT found a lot to like in the premise, as the network happened to be looking for a show both about a restaurant and one that could dramatise the growth of the welfare state after WW2.

“So this project was spot on,” Kvensler says. “They asked me if I wanted to work on one of the biggest Swedish drama projects ever, which is going to follow characters over 25 years and talk about how the Swedish model of society came into being and, of course, I said yes.

“It’s a unique project, a once-in-a-lifetime experience, so I jumped on it. It’s a love story, there’s intrigue and fighting within the family [that owns the restaurant] but at the same time we have all the classical drama elements – and the restaurant is also a metaphor for Swedish society. I thought the scope of that and the ambition was something I really loved.”

The series begins in 1945, with the opening scenes taking place during confetti-covered street celebrations as news spreads throughout Stockholm that the war has ended. By the end of season two, events will have moved forward to 1962. A potential third and final season would then continue the story between 1968 and 1971.

“Then we will have followed these characters and this restaurant for 25 years. And during these 25 years, Sweden as we know it, and the welfare state we have now, came into being,” Kvensler says. “That’s a big part of this show – to show how these changes in society affected people. You can see it in the way some of the characters are very pro-change, while others are hesitant and negative about change. It’s like a tug of war inside the family.”

The family in question is the Löwanders. Oldest son Gustaf (played by Mattias Nordkvist) has managed to keep the restaurant afloat by somewhat dubious means and intends to carry on down that path. But when middle son Peter (Adam Lundgren) returns home from the war, he discovers changes are needed to keep the business from bankruptcy. Meanwhile, a brief encounter with kitchen hand Calle (Charlie Gustafsson) leads to untold consequences for daughter Nina (Hedda Stiernstedt), who has designs on opening a nightclub in the restaurant banquet hall.

As the family descends into conflict, matriarch Helga (Suzanne Reuter), with assistance from head chef Backe (Peter Dalle), watches over the family business.

The series is produced by Jarowskij, in partnership with SVT, Viaplay and Film i Väst. It is distributed by Banijay Rights.

After joining the project, Kvensler identified Calle, originally given a tiny role, as the potential hero of the story, who could work his way up from underappreciated kitchen hand to open his own restaurant.

“That’s the kind of hero’s journey you want in a story,” Kvensler explains. “Also, the love story with Nina is a timeless story that you want to have in a show like this to carry the interest of the audience.”

Working with co-writers Nevander, Rosenlind and Jonas Frykberg, Kvensler broke down the initial story outline and then built up the scripts episode by episode. “It was a long and tedious process,” he admits. “We started all over again a couple of times because it was hard to find the balance between telling the history of Swedish society and the restaurant business. We learned a lot about it to write it; we read a lot and talked to people. But then what you have to do is throw all that away and just tell the basic story. It’s not going to be very interesting for the audience if it’s a history lesson. We try to find the balance, and hopefully we did.”

Hamrell joined the series when there were scripts in place for the first and last episodes, “but nothing in between,” he says. “It’s a huge project and was a great task to take on, from the cinematography to building the sets. It’s been a great journey.”

He worked alongside fellow directors Molly Hartleb in season one and Anna Zackrisson and Andrea Östlund in season two, and says his aim was to make a modern drama, despite The Restaurant’s post-war setting. The budget afforded him the chance to build the restaurant and kitchen sets across several hundred square metres, which gave him the space he needed to keep the camera work looking fresh across 20 episodes. The set also embodies class boundaries in 1940s society, with the working class confined to the kitchen while the wealthy and powerful enjoy fine dining yards away in the opulent surroundings of the restaurant.

The biggest challenge, however, both on set and in the writers room, was figuring out how to seamlessly advance the story across several years without alienating the audience. For Hamrell – who was the conceptual director on Äkta Människor (Real Humans), the inspiration for Channel 4/AMC sci-fi series Humans – the task of keeping his cast on their toes for 276 shooting days meant he could never let them relax.

“They didn’t do it, but when you know your character so well, it’s so easy sometimes to lean back and not deliver,” he says. “On the other hand, the script was always changing so they couldn’t relax. They also had to deal with the language – how to find the correct tone. It was a challenge not to be too modern but also not too old.”

With such a large ensemble cast and multiple plot points in play from the outset, Hamrell also needed to find a way to hook viewers from the start. “So I took a lot more shots in the first two episodes than in three and four, to keep the pace up,” he explains. “By the third and fourth episodes, the story starts working by itself because, by then, you’re interested in the characters. But you have to catch the audience and bring them in before they switch off.”

Time jumps were something Kvensler had never  previously had to content with in a series. In one case, four years pass between two episodes in season one.

“The challenge then is when you come back [after the jump], you need to tell the audience what has happened, and that bogs down the episode for the first two acts,” he says. “The other thing is it’s been four years, so you want something to have happened. You don’t want the feeling that, ‘OK, they say four years have passed but this could have happened the next week.’ So finding the balance between that has been really tough. It’s been always the episodes that have come after the time jump that we’ve had to work on the most.

“When we start on season two, we’ve moved five more years, so we start in 1955 and then we end season two in 1962, so there are more time jumps within that season. It’s been a real challenge.”

Perhaps the biggest time jump the series makes is one to the present day, as both Hamrell and Kvensler draw parallels between post-war Sweden and contemporary society.

“We have challenging times now, there’s a lot of uncertainty,” notes Kvensler, who developed The Restaurant alongside another SVT drama, snow-covered thriller Svartsjön (Black Lake). “In Sweden, the discussion we are having is can the welfare state we have survive? I think a story like this can bring a little hope because if you go back to 1945, you can see it was a much harder society and a lot of people lived rougher lives.

“Everything that has changed from then to now is the result of hard work and political decisions. Do if they could fix their problems, probably we can fix ours. We just need a little positivity and hope.”