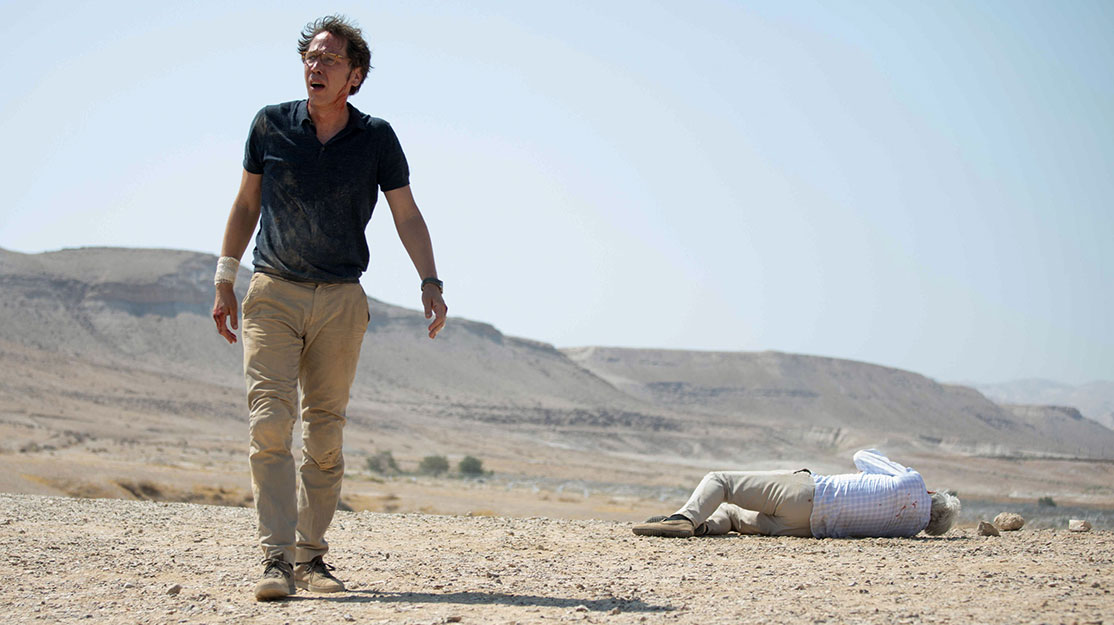 When a groom is killed at his wedding, his new wife is quickly arrested. But as director Thomas Vincent and producer Caroline Benjo explain, there’s much more to the story of six-part French-Israeli psychological thriller Possessions.

After directing three episodes of blockbuster thriller Bodyguard, director Thomas Vincent was looking for his next project when producer Caroline Benjo passed him the script for a series he describes as Rosemary’s Baby meets The Good, The Bad & The Ugly.

“Caroline had been very consistent in coming back to me with this project,” he recalls. “My schedule happened to open up and I thought when I first read the script that there was something very original about it, something very compelling. It was like Roman Polanski and a spaghetti western in one, and I thought that was something I’d never seen. It was a nice challenge to take up.”

The series in question is Possessions, a French-Israeli coproduction that tells the story of Natalie, a young French expat living in Israel who is accused of murdering her husband during their wedding reception. Karim, a French diplomat responsible for providing aid to nationals in difficulty, comes to her aid but gradually falls under Natalie’s spell.

He does not know if Natalie (played by Nadia Tereszkiewicz) is deeply lost and vulnerable, or formidably manipulative. Becoming increasingly obsessed by the case, Karim (Reda Kateb) dives into the mysterious past of Natalie and her family to find out what really happened.

Distributed by StudioCanal, the six-part psychological thriller was created by Shachar Magen (Sirens) and written in collaboration with Valérie Zenatti (A Bottle in the Gaza Sea). Haut et Court TV (The Returned) produces with Quiddity for France’s Canal+ and Yes TV in Israel.

The show’s title points to the question at the heart of the series: who is possessing who? That idea also takes what could be described as a crime thriller and adds a layer of supernatural mystery to the proceedings.

“Is Natalie possessed? Is it a sci-fi horror story? Is it a ghost story, or is it more a symbolic possession? This is basically what the show is about,” Vincent says. “Or is it the story of a dysfunctional family? Is she possessed by the madness of a mother, of the whole mess of this family? The show keeps going from one to the other and the mystery just goes deeper as the episodes go by.”

At first, it appears there is no mystery at all. During her wedding reception, Natalie wanders off in search of her groom, looking extremely distracted and disorientated. Then as they prepare to cut the cake in front of hundreds of well-wishers, the power dramatically cuts. When the lights return moments later, Natalie is holding the large cake knife, blood stains seeping into her white dress, as her new husband lays dying on the ballroom floor.

As Natalie professes her innocence and total disbelief at what has just happened, Karim comes to support her. But his initial investigations reveal some strange dynamics within Natalie’s family that may hold the answer to what happened.

“There’s one storyline that is an Agatha Christie-type plot with suspects lined up one after the other. Then, at the same time, the question of Natalie’s guilt goes deeper and deeper and the supernatural option evolves and becomes more clear. We keep the mystery going on until the very end,” says Vincent. “There’s something really original about this show. Many shows are never as good as their first one or two episodes. This is not like this. This show evolves and is alive until the end.

“It also evolves in terms of the visual style and where it plays,” the director continues. “Basically, it starts from Be’er Sheba, a new city in the Negev desert, which is a place that is very poetic. It’s not a pretty desert – it’s rock and thorns – but it’s very strong visually. And the more the story goes, the deeper we go into the desert. The final episode basically plays out in a house in the middle of nothing. And it’s such a powerful place. As we go into this place, we go into the deepest feelings of the characters.”

After the success of Bodyguard, Vincent received numerous offers “to do exactly the same thing, which is the last thing you want to do.” Instead, he was looking for a new challenge, specifically one that scared him. “You need to be afraid on your first day. That means you’re in a good place, and I was scared on the first day,” he jokes. “It was challenging. To make this was very exciting.”

Benjo’s persistence in securing the director’s services paid off. Vincent joined the project with four scripts in the bank, collaborating with Magen on the last two.

“It’s been a process, really. Shachar, Caroline and myself, it was very much a team effort, although obviously it’s Shachar’s work,” he says. “He’s someone with a very strong vision. I was advocating for tension and he was very much into character. We’ve been working a lot in the edit to find the right balance, never to go too far one way or the other. The investigation parts with the two Israeli cops and the family parts are covered in a very different way, so on one side there’s also some reality and realism.”

Haut et Court previously found global success with another series that blends reality with the otherworldly and fantastical – 2012’s Les Revenants (The Returned) – and Benjo says she was so “mesmerised” by Magen’s vision that she agreed to partner with him on Possessions after hearing his pitch for the first scene.

“The first conversation we had was four years ago but we needed to nurture it for a long time,” she says. “We also needed someone who had a strong vision as the showrunner and Thomas was finally available because he had not been available for a long time. That was really great for us.

“What was a very strong point for us, because Shachar’s Israeli and doesn’t know much about the French culture, is he came up with a name we knew in France of an amazing novelist and screenwriter, Valérie Zenatti, to work with him. She’s one of the best French writers and has a very good knowledge not only of French culture but her parents live in Israel. She was going back and forth between both cultures and that was essential to us and to Shachar as well.”

Vincent says the main theme of the series is abuse, as viewers are left to question who is an abuser and who is a victim of abuse. Notably, the cops’ first theory about the motive behind the murder is that Natalie was abused by her husband.

“Maybe she’s a murderer, but maybe she’s also a victim,” Vincent says. “Maybe she’s both at the same time. And so the question is, who is she a victim of? This question plays through the whole show, both within the whodunit thing of who killed her husband and who has been abusing Natalie. But it also works on the sci-fi level – has she been abused by someone or by something?”

“The thing with abuse that we tend to forget is that the abuser has been educated most of the time by a man and a woman,” Benjo continues. “And the responsibility of mothers in the way they educate their sons is something quite important. Here we are confronted by two very traditional families where faith and tradition and rituals have their part. Those traditions have been carried on by the mothers, and how they pass that on to their sons is really central to the story. It’s an interesting angle that is rarely seen in the story of abusers.”

“The underlying theme is love, because abuse is just a form of sick love and a deformation of love,” the director adds. “Ultimately, this is what it’s about.”

So, as viewers follow Natalie from the scene of the crime to a jail cell, should they trust her, sympathise with her or suspect her of the shocking crime? “Everything at the same time,” Vincent says. “That’s the whole question. Should we be taken in by her? Should we suspect or should we defend her? It’s the whole question of the show. It is what makes it so interesting, because we keep bouncing back from one side to the other all the way until the very last picture.

“And does she hide the fact that she doesn’t remember something or does she not remember it for real? Something that is played very subtly in the writing is how memories are going to come back to her,” Benjo notes. “You will go through very contradictory feelings towards this character.”

Meanwhile, Karim reflects the audience perspective as he first meets Natalie and strives to secure her release while delving further into her mysterious past.

“At first sight, he’s taken by her, that’s pretty obvious. But then he doesn’t really know [what happened] and he doesn’t know until the end,” Vincent says. “He’s trying to defend her while never being really sure of what’s going on. Very often, the show is told from his point of view. When he sees Natalie’s family, he sees how crazy they are; and when he sees Nathalie, he sees how charming and yet how dangerous she is.”

The director also believes the series shows a version of Israel that isn’t often presented on screen. “It’s not about conflict. Israeli fiction tends to be very political, but it’s a very different genre for Israeli television,” he says. “That makes it really interesting and special, and also probably more universal.”