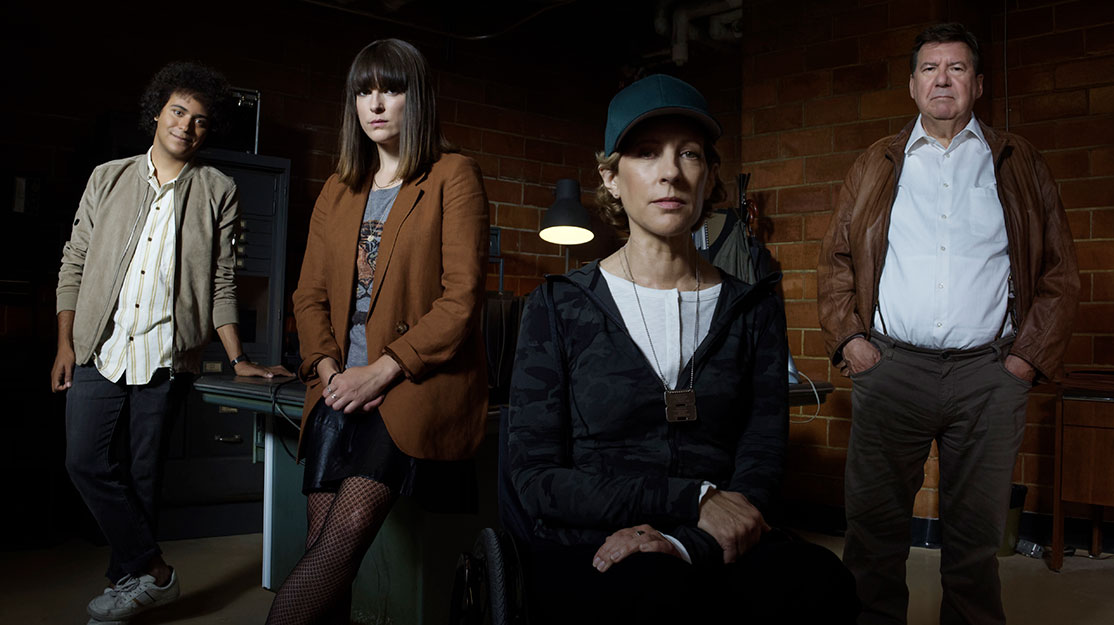 Portrait-Robot (The Sketch Artist) co-creator and director Alexis Durand-Brault and producer Antonello Cozzolino discuss the making of this innovative Quebecois crime drama about a police officer who has a special talent for identifying criminal suspects.

While the enduring popularity of crime dramas means they continue to dominate television schedules around the world, it’s not often a series can claim to have truly found a new way of exploring the genre.

But Portrait-Robot (aka The Sketch Artist) might very well have found a fresh perspective with which to tell the well-trodden story of a team of police officers investigating homicides, disappearances, sexual assaults, robberies and terrorism.

The 10-part French-language series, which hails from Quebec, introduces Ève Garance (Rachel Graton), a portrait artist with a unique talent for building the profiles of suspected criminals under investigation in Montreal. To do this, she delves into the minds of the victims, asking them to recreate their experience in their head and before she pieces together the face of the suspect. This part of the series is realised in a visually stylish way as different segments of photos flash across the screen until the photofit is complete.

Over the series, Ève has a hand in investigating five different cases, with each one running across two episodes, while also attempting to solve the disappearance of her six-month-old son William five years before, sketching the face of what he might look like now in the hope of one day finding him.

“The big idea for me was to find a new way to tell a cop story,” says director Alexis Durand-Brault, who created the series with his real-life partner Sophie Lorain, who stars in the series as fellow police officer Maryse. “The idea of the sketch artist, or what we call in French a ‘portrait robot,’ it’s a new way to tell that kind of story because it is, first of all, visual. It’s cool to go inside the head of the people and look at the crime sequence and see what they saw and feel what they felt.”

Ève, who has bipolar disorder, is fuelled by the suffering in her own life and finds she has a gift for reading people, which allows her to put herself in the mind of the people she speaks to.

“You can talk about hypnosis or stuff like that if you want to, but for me it was more spiritual,” Durand-Brault says. “She can discuss with the witness or the killer whatever the story is and she can go inside their mind because she’s suffering as well. She’s suffering from a personal point of view. But she can put herself in the place of the people she’s talking to.

“What we call the main story is Ève looking for her son. She thinks someone kidnapped him in the night and saw a shadow on the wall before the kid disappeared. Like a puzzle in her head, little by little she starts to build up the story of what happened five years ago. What I love about that story is, by the end, she will do exactly the same thing she does with a witness but with herself. I love that part.”

Other stories will see Ève and her colleagues – Maryse, Bernard (Rémy Girard) and Anthony (Adrien Belugou) – try to solve a kidnapping and help a serial killer who has forgotten the face of a victim he never admitted to killing. In one two-part episode, she also uses the memories of six different people to piece together the face of another suspect, with each one only seeing a glimpse of their face.

Durand-Brault had been to see Graton in a stage play when he became intrigued by one part of the show that featured a sketch artist. He then worked on script ideas with Lorain before they met writer André Gulluni, who would go on to pen the series. Launching on Quebecois streamer Club Illico on April 15, it is produced by ALSO Productions in collaboration with Quebecor Content.

“When I saw Alexis and Sophie pitch the project to the broadcaster, it was the perfect pitch,” says producer Antonello Cozzolino. “Alexis was telling a story that didn’t really exist [on television] and the way he pitched it, he really attracted the attention of the broadcasters. It was phenomenal. A couple of hours later, we got the green light.

“The key is that the stories are really human. When you see a cop show, and I’m a cop show fan, the story is always very high-tech, with a lot of suspects. They’re thrillers but sometimes the human aspect is lacking. Because of Éve’s bipolar condition, it puts the accent on the human effect as well as the technology. It touches your emotions and your intellect, so you get a perfectly balanced cop show, which is quite rare. To me that’s the key to why Portrait-Robot is successful. The direction of Alexis and the look of it alongside the effects make it quite an appealing, human cop show.”

Durand-Brault says he likes to focus on the emotional aspects of storytelling while Lorain – with whom he has worked for 15 years – builds the structure of the show. But early in development, his focus was on how to present Éve’s sketches as they are being compiled.

“I didn’t want a computer show; it’s always a bit boring and it’s been done,” he says. “I didn’t have a lot of money to do it like they do in the US so I knew I needed something more creative. I did my best to make it as arty as possible. I used old photos mixed with drawing to make something more organic and human, so each sketch from Éve is a piece of art. That’s why she’s so special. No-one can do that except her. And if she’s special, her artwork had to be special.”

With previous credits including talent agency-set Les Invisibles and medical series Au secours de Béatrice, Durand-Brault cites Steven Spielberg as his biggest inspiration. Like the Jaws and Saving Private Ryan director, he wanted to put the camera – and the viewers – in the middle of the action and also demanded that every scene push the story forward.

“I was also visually inspired by [David Fincher movie] Seven, which is very moody and very dark,” he reveals. “I didn’t want any new, high-tech office. I wanted something old, so they do their work in the basement of a big building. I wanted to avoid modern aspects of the cop show like CSI.”

Shooting the series during the coronavirus pandemic proved to be challenging, but the series successfully removes any sign of the ongoing global health crisis. Pre-production had to be halted during the initial lockdowns but the scripts remained unchanged and schedules, and locations were shuffled around to meet the numerous requirements demanded by health and safety regulations.

“A producer’s job is to protect the content and working with Alexis and Sophie together, it’s organic,” says Cozzolino. “They’re also producers on the show so they care about production, the content and the direction.What we tried to do, and I think we succeeded, is to keep the content intact. If you want to play this game, you need to go in the trenches and work hard. The challenges were numerous. Scheduling was crazy because the actors needed to be part of a zone. We had to clean the locations and wash them afterwards. The hours were also limited because of the curfew. We could hold a conference on the challenge of producing under Covid. But when your partners understand what you’re facing and are part of the solution, it’s a lot easier.”

The majority of filming took place in a government building that doubled for offices, the police station, a hospital and a jail. “Everything was built inside this building,” the producer says. “We needed to limit our movements because that was time- and money-consuming and really limited the shooting time Alexis had. In one way we got lucky, but in the financial way we were unlucky because locations were our main financial burden.”

With Portrait-Robot enjoying its international premiere today as part of Content Quebec On Demand, Durand-Brault believes the series works because “nobody’s seen it before. Nobody has ever told a story like that before the way it’s told,” he says.

“I did my research before and I was sure somebody had done something like this before me, and I didn’t find anything, actually. This concept could be pushed further and made even more creative and even more entertaining. That’s why I think this project has got some legs.”