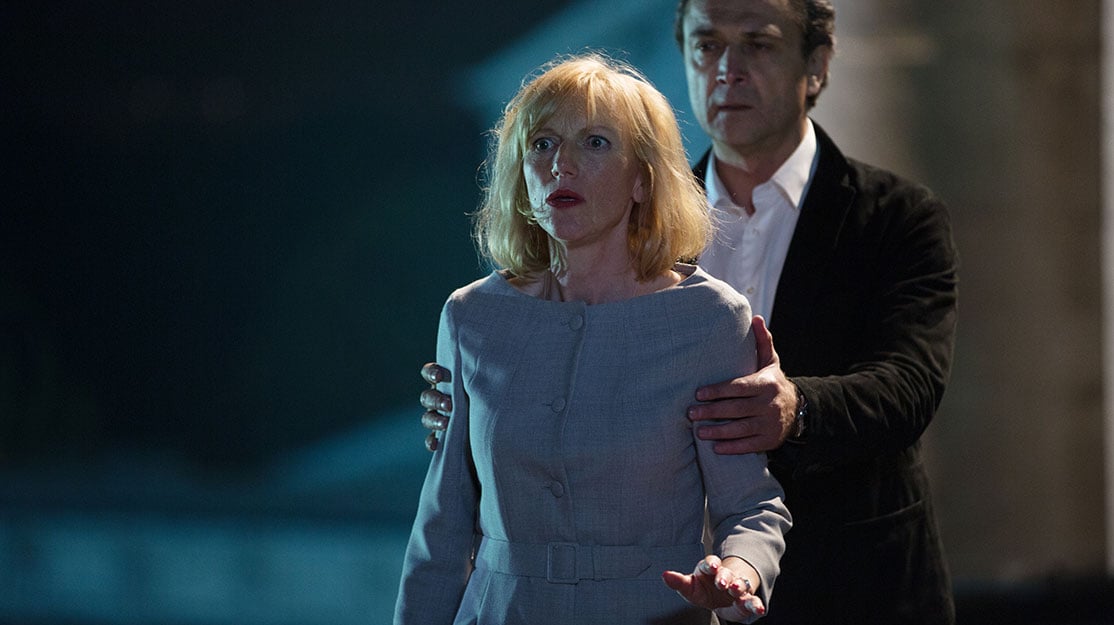 Dutch drama Brussel (Brussels) sees the powerful and powerless collide against the backdrop of the city at the heart of the European Union. DQ speaks to the writer, director and producer of this landmark 10-part series.

From the opening credits, it’s immediately clear that Brussel (Brussels) is more than just a political drama set in the confines of the European Parliament. Against the landmarks and monuments of the eponymous Belgian capital, an eagle swoops through the air, a wolf drinks blood from the pavement and a snake slithers along a cobbled street.

Then suddenly, the animation builds to a crescendo where animals attack – a lion savages a zebra, the snake swallows up a mouse, a leopard drags a horse to the ground.

It’s a startling opening sequence that hints at what is to come in this series, with characters  out for blood in an increasingly high stakes game of lobbying, deal-making and conspiracies. Just minutes into the first episode, one character is told: “Happy hunting.”

Director Arno Dierickx explains: “We have tried to use the city of Brussels, where all the power is located, as an arena for where animals are very active. There are strong powerful animals and little animals that get eaten. It’s obviously a metaphor for what is going to happen in the course of the season.

“It starts off almost conventional; it’s a political drama with a little bit of corruption going around. But the story quite quickly explodes in all directions involving Afghanistan, the Congo, the north of Africa and Holland. So it’s much more than Brussels. The topics are terrorism, immigration, big money, oil, corruption and power structures inside the EU, so it’s very complex. It’s very difficult to summarise what this series is about!”

The series opens with oil power broker Moniek van Dalen (played by Johanna ter Steege), who is seeking EU support for a new project in Brussels until Viktor Petrenko (Alexander Lazarev), a Ukrainian billionaire and Moniek’s former lover, succeeds in scuppering her ambitions and restarting their affair.

When a plane carrying Pjotr, the fiancé of Moniek’s daughter Nadja, disappears over the Pacific on its way to an environmental conference, Nadja becomes caught up in conspiracy theories about Viktor, believing many of his enemies were also onboard. But what she doesn’t know that he is also her biological father.

Produced by Endemol Shine Netherlands, Brussels was created and written by Dutch writer Leon de Winter and directed by Dierickx. Debuting in January this year, it is the first original series commissioned by Dutch telco company KPN for its new OTT service and is distributed worldwide by Endemol Shine International.

The concept of Brussels was triggered by the series that launched another streaming platform, US giant Netflix. De Winter “adores” House of Cards, the drama starring Kevin Spacey and Robin Wright that debuted in 2013 and takes viewers inside the corridors of power in Washington DC.

“After seeing the first season, I thought, ‘We have our own DC and it’s called Brussels,’” he says. “It really triggered my imagination. I was full of admiration for [the show], it’s truly a masterpiece.

“So I went to Brussels to meet with people, talk to lobbyists, parliamentarians and the federal police and slowly started to collect material, although I wasn’t sure what to do with it. Was it a novel, was it a film or a TV series? But I was confronted with so many different types of people, cultures and languages that it had to be a TV series. So I started to develop a treatment and build all these various storylines over two years or so, and a little bit later I started writing all the episodes.”

Politics alone wasn’t enough for de Winter, who decided to put a family conflict at the centre of the series: “It’s so essential for human beings and there are great TV series that are built around family relationships – and that’s how we start up the main storyline of the mother, the father and the child. It can be very complicated, as it is in this story, but House of Cards and even [Danish drama] Borgen are not about politics, it’s always about human relationships, hate, love, greed, hope and deception.”

Looking for a director to partner with, de Winter was impressed by Dierickx’s previous credits (Russen, Overspel) and, as a stranger to the city, he loved the fact Dierickx had spent 10 years living in Brussels as the son of a European politician.

He grew more impressed when he saw the director in action: “I was preparing to be a writer on set and to bother him as much as possible but, on the very first day, the actors did the first rehearsal and it was terrible,” de Winter recalls.

“I thought it was so bad – then he sat down with them for 15 or 20 minutes, they came back and did a first take and it was absolutely brilliant. I realised he really knew what he was doing. I still don’t know how he did it, but he did! Day after day, whatever the scene was, in a short space of time, he brought an excellence with his cast. So I thought I should not bother him, it’s his thing. I saw the dailies, I discussed it with him but I was truly happy and for me it was one of the most amazing experiences as a writer to work with Arno.”

Dierickx says he was drawn to the show by the opportunity to work with de Winter, a writer and columnist who first invited the director to discuss the series before he first put pen to paper.

“We did this whole show in a very short period of time,” he reveals. “From nothing to the finished 10 episodes, it was one-and-a-half years, which is incredibly short. It meant the script wasn’t finished before we started shooting. And during shooting, things kept changing and we kept adapting. It’s like a kaleidoscope – any way you turn it, it’s confusing but brilliant at the same time.”

Dierickx admits he is known as a difficult director because he challenges actors to step out of their comfort zone, believing they are more likely to excel in a role when they play someone completely different from themselves.

“If they can say it’s not really me, it’s much easier for them,” he says. “There is a lot of open dialogue and I have certain things in mind about characters, but as soon as we get to do the actual work, I’m only looking at whether I’m intrigued. This story was so kaleidoscopic and it was going in all directions that the only thing I could do was treat each scene as if it was the most important scene in the whole show.

“There were no transition scenes, no scenes that were less important. Every scene for me was as important as the other and maybe that helped to make it a show that is very diverse. It created a lot of opportunities in the edit to create different styles – from very stylistic, slow-paced and neatly composed to completely chaotic.”

Iris Boelhouwer, CEO of producer Endemol Shine Netherlands, describes Brussels as a “very special commission” due to the fact it was KPN’s first series and “the biggest commission in Dutch drama history, budget-wise.”

She continues: “The other thing that was new about this project was they believed in Leon. He had this idea for a drama series about this powerful city and the people who work in it – but he didn’t work along the lines of a regular drama series. Sometimes it drove the producers mad, but I can say that now because we had a happy ending!

“In the beginning, we said it might be eight episodes, 10 episodes, 12 episodes – it all depended on the rhythm of the story and how we felt as we were shooting it. That was quite a difficult way to work, but we managed quite nicely and delivered a 10-part series.”

With a budget of €7m (US$7.6m), Brussels was made for “absolutely nothing,” according to Dierickx, who says KPN “gave us the money and told us to come back when it was finished.”

In fact, De Winter, Dierickx and Boelhouwer all describe working with KPN as a “dream,” thanks to the complete freedom the creative team had to deliver the show they wanted to make.

“There was a tremendous amount of freedom for us to do whatever we wanted and as long as it fitted in the budget, there were no questions asked,” Dierickx says. “Even when we presented it to the network, it was just to show them what we had done. It wasn’t to discuss the edit or what they might not like. It was clear they also wanted it like that.

“We really believe you need this freedom to do something out of the ordinary and not fall into the trap of doing the same things over and over again. We tried to play with this phenomenon of binge-watching, where you’re watching it like you would read a book. We called them chapters, not episodes, and they have different lengths – which is common these days but in Holland it’s quite new. Also, we didn’t end every chapter with a classic cliffhanger, and we suddenly introduce completely new characters or Africa and slowly you understand there is a tie to other stories.”

That’s not to say it was not without the challenges that come with shooting in 98 locations in just 90 days, with a script featuring 126 speaking characters. Tragically, the production became complicated further on just the second day of filming when suicide bombers targeted the Belgian capital’s airport and a metro station, killing 32 people and injuring more than 300 others.

“We were very close to the subway station where it happened, which made it even more complex,” Boelhouwer explains. “We had all these scenes prepared but Brussels didn’t become an easier city to shoot a drama production in after the attacks, obviously. It was a complicated series to make. Now we can say it all worked out but during the whole process, I had a nightmare or two.

“At one point before we started shooting, I accused Leon of being Nostradamus because in the original script, there was a final scene in which a group of terrorists attacked Paris in a brasserie. It was a shooting, before The Bataclan attack [in November 2015]. So when this idea became close to reality, it changed a bit because it was a bit too close to home. In the end, it’s just a drama about people and their lives, with the arena of Brussels, so we never considered stopping.”

De Winter describes the making of Brussels as an “amazing adventure – the type of project you can only dream of, with enormous artistic freedom. I also tried to do all the things I’ve been dreaming of doing since I started to realise that modern TV series are a fully grown, completely mature new art form. That’s an amazing development that’s taken place in the last three decades and has brought TV series to the same level as literature. The modern TV series is as interesting, fascinating and expressive as the great 19th century novels.”

He is now prepping storylines and scenes for a potential second season, though he is still waiting for the official greenlight. “I hope it will be official very soon,” he adds.