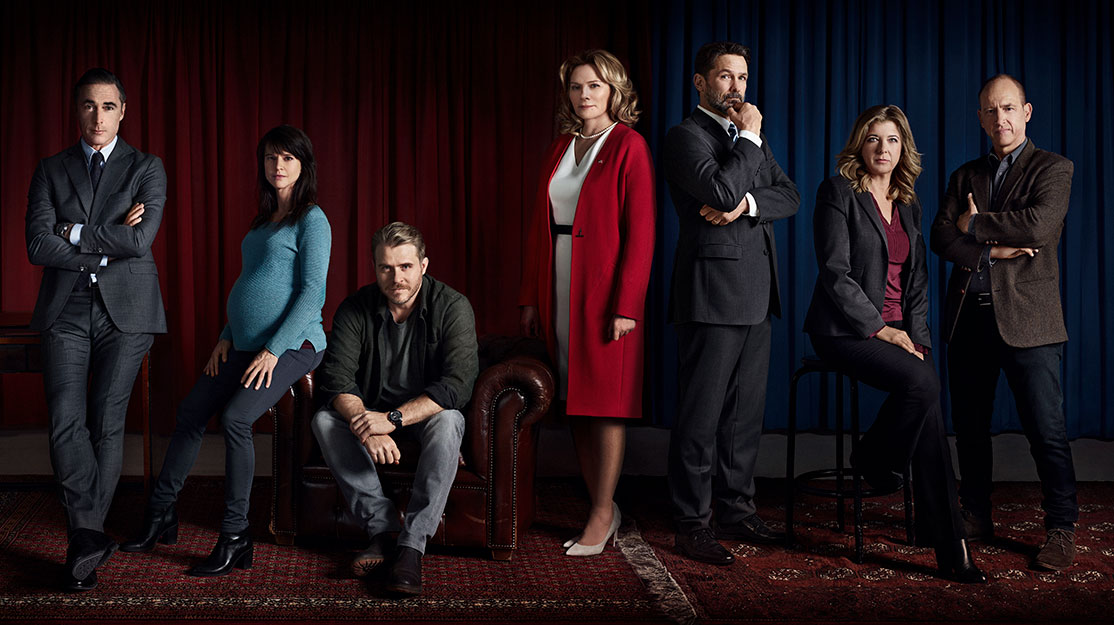 Swedish noir Modus is back for a second season, with a cast that now includes Kim Cattrall as the US president. DQ visits the Stockholm set to find out why this drama has global appeal.

TV drama doesn’t get any more glamorous than this. We are crouching in Stygian semi-darkness beside the monitor in a dingy corridor at the Swedish Defence Ministry in Stockholm. We can barely see our hands in front of our faces.

To add to the sense of doom and gloom, the windows are blacked out. Suddenly, with no warning, out of the gloaming come marching two very scary-looking, thickset heavies in smart suits wielding machine guns. They are clearly not here to sing Happy Birthday to anyone.

Unsurprisingly, this is the set of a Nordic noir offering – and this one is literally noir.

Ever since the magnetic Danish crime story Forbrydelsen (The Killing) broke through internationally, winning a Bafta in the UK in 2011, and was immediately followed by the overseas success of series such as Borgen, The Bridge, Beck and the Swedish version of Wallander, Scandi dramas have been drawing huge and passionate audiences everywhere.

DQ is in Stockholm observing the filming of the newest such series to make waves globally. We are watching the white-knuckle denouement of the second season of Swedish drama Modus. Broadcast last year, the first season made a major impact around the world.

Its co-star Henrik Norlen, who has also appeared in such well-regarded Scandi dramas as Beck, Stockholm East, My Skinny Sister and Hotel, takes a break between scenes of this intense series to consider why Nordic noir has struck such an international chord.

“I think it’s because there is a lot going on behind these characters. They’re not just policeman or criminal profilers – they are also people. They have great depth.

“You get to go inside their head and see what they’re thinking. These dramas are also a bit darker than British or American series. It is a tradition in Nordic countries of telling stories that are dark, mystic and pagan.

Tobias Åström, the line producer on Modus, chips in: “In the past at television trade fairs, the only thing people wanted to see at the Swedish stall was what meatballs we had. Now they come up and ask, ‘What programme can you give me?’”

The second season of Modus is an eight-part adaptation by the Emmy-winning Danish screenwriters Mai Brostrøm and Peter Thorsboe of Madam President, the novel by the bestselling Norwegian crime author (and former Minister of Justice) Anne Holt.

Holt’s work coheres with the sepulchral prevailing mood of Nordic Noir. As the British crime writer Val McDermid has observed, “Anne Holt is the latest crime writer to reveal how truly dark it gets in Scandinavia.”

In this gripping season, intuitive Swedish criminal profiler Inger Johanne Vik (played by Melinda Kinnaman, My Life as a Dog) and compassionate detective Chief Ingvar Nymann (Norlén), both returning from season one, are now an item.

But the pair, who made a big splash when they first appeared together in the widely acclaimed first season, have little time to enjoy their life together as they are immediately plunged into another life-or-death investigation. They have to scramble when the first ever female US President, Helen Tyler (Kim Cattrall, Sex & the City), is kidnapped during a state visit to Sweden.

As the US and Swedish authorities struggle to rescue the president and indulge in a bitter blame game, Inger is reluctantly forced to work closely with her former mentor, the Machiavellian FBI director Warren Schifford (Greg Wise, The Crown). When the details of their troubled shared past slowly start to emerge, Inger’s entire mental stability is put at risk.

A coproduction from SVoD platform C More, TV4 Sweden, Miso Film Sweden and FremantleMedia International, the second season of Modus makes for a compelling tale of revenge, recrimination and retribution. It is due to premiere on C More later this year before airing on TV4.

British actor Wise is delighted to be dipping his toe into Nordic noir for the first time with Modus. He says what distinguishes this kind of piece is its willingness to treat its audience with respect. “What I’ve really enjoyed about working on this drama is the time spent developing the story and the characters,” he says.

“Very often, programme makers rush through their storytelling because they don’t trust the audience to get it. Things have to happen very fast – cut, cut, cut. Those productions imagine that we are the MTV generation and have memories like goldfish.”

But, continues the actor, who has also had leading roles in such memorable British dramas as Sense and Sensibility, The Outcast, Cranford and Madame Bovary, “viewers of Scandi dramas are really given time to invest in their relationship with the characters. They are allowed a proper glimpse into another world. It’s like the slow food revolution” – only in television.

International audiences are also attracted by the strangeness of the universe conjured up by shows such as Modus. Cecilia Bornebusch, the show’s production designer, comments: “It’s more exciting as a viewer if you don’t really understand what’s going on and you have to read between the lines. It’s more enticing than your own language because it seems exotic.

“Also, I think in Scandinavia we are very good at portraying relationships. We have never had great problems with war, so we have had other things to write about, like relationship difficulties. That’s in our blood.”

Like all the best Scandi dramas, Modus depicts a heightened world. Åström, who has also worked on The Bridge and The Girl with the Dragon Tattoo, reflects: “As in fairytales, in Nordic noir you draw on things from the margins. Normal people are greyer than the characters in drama. So when you tell a story in a drama, you can make it more colourful than real life.”

But, he adds with a smile, “Of course, in reality Sweden is not that dangerous a place. It does not have a serial killer hiding in every bush. Have you ever been to Ystad, where Wallander is set? It’s so quiet in reality. If that drama were true, there would be no one left in that town!”

Modus also employs another of Scandinavia’s great resources: its pellucid natural light. Bornebusch observes: “The Nordic light is wonderful. The light in Southern Europe is earthier, whereas we are influenced by the snow and the winter. It’s always so dark here – that’s why we like bright colours.”

In addition, the drama makes tremendous use of its Swedish backdrops. Wise remarks: “One of the really appealing things about Modus is that it shows the world how beautiful Stockholm is. It’s a stunning city. But it’s also a place full of secret tunnels that people have forgotten about.”

The city’s duality mirrors a key theme in this season: the contrast between our private and public faces. Holt has written several more novels about Inger, and the production team are eager to make further series tracking this fascinating and complex character.

But, equally, they are well aware that the best way to maintain the audience’s interest is to keep Modus fresh.

“If we made another season,” Åström concludes, “we would want to make sure that we could add something to it. We wouldn’t want to just keep milking the same cow and producing the same milk.

“We would want to make a new flavour – like banana!”