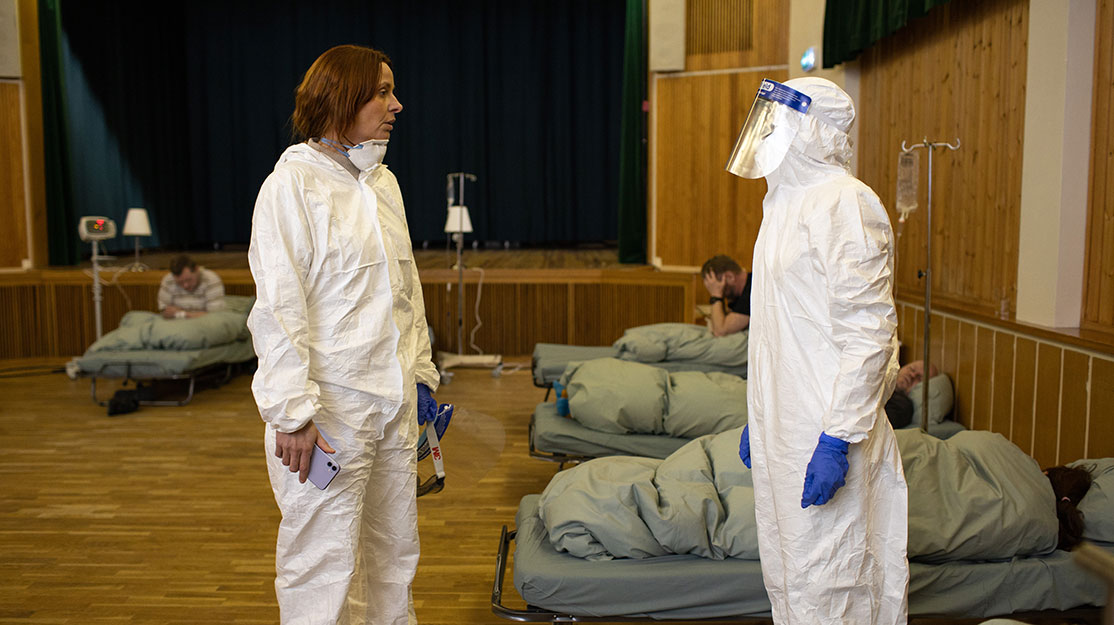 Vitjanir (Fractures) star Sara Dögg Ásgeirsdóttir and producer Hörður Rúnarsson speak to DQ about how themes of science and spirituality clash in this Icelandic drama about a city doctor who returns to the small village where she grew up.

As Icelandic drama has broken out around the world, the industry has also earned a reputation for playing and subverting with genre – from crime drama Black Sands and ultra-stylised series Stella Blomkvist to political drama The Minister and supernatural-themed Katla.

Now set to continue that trend is Vitjanir (Fractures), an eight-part series that mixes medical drama with a debate between science and spiritualism as a city doctor returns to the small village where she grew up and must face the ghosts of her past.

Set against a beautiful and brutal landscape, the show follows ER doctor Kristín, who moves home with her 15-year-old daughter, Lilja, in the wake of her divorce to live with her psychic mother, Johanna.

Becoming the first doctor to live in the village for a long time, she quickly finds herself out of her comfort zone as her pragmatic ideals contrast sharply with the village’s use of herbal medicine, spiritualism and psychic powers. Her views also clash with those of her mother and daughter, while her love life becomes tangled between her soon-to-be ex, Helgi, and her old flame – and local policeman – Ragnar.

“It’s a medical drama without a hospital,” explains producer Hörður Rúnarsson from Glassriver, the production company behind the series. “It’s very Icelandic, very local. We’ve found not doing a medical drama in a typically sterile hospital environment really interesting. There are medical cases in each episode, but they’re not the core of any episode. Instead, they interfere with the dramatic tension that is building within the character relationships.

“Then adding the really unscientific element of psychic abilities makes it a really interesting show to watch. It’s also much more about the characters and dealing with interesting medical cases, love affairs, family dilemmas and science versus the supernatural. The tagline is ‘Home is where the heart breaks.’ Kristín discovers that maybe she needs this village as much as it needs her.”

Leading the cast is Icelandic star Sara Dögg Ásgeirsdóttir (Pressa, Stella Blomkvist), who plays Kristín. She had her first audition for the role back in Spring 2020 and then filmed the series between September that year and January 2021.

“We were filming at the peak of Covid and, thinking back, it feels like a different lifetime,” she tells DQ. “The situation was so intense because of everything, and it’s absolutely amazing we managed to finish it.”

The actor was immediately drawn to the early scripts and felt a connection to Kristín, even though she says she’s the exact opposite of the character she plays on screen. “Sometimes when you get a script, you don’t feel anything. But when I read the first page, I instantly felt something,” she says. “I felt a tingling of some sort, a warmth, in how it was written. I still haven’t realised exactly what it was, but there was some softness and warmth that made me very curious to see how the whole series would be.

“Kristín is a very scientific woman, she’s a very focused person and she sees things in black and white. Things have to be proven for her to believe them, which is the total opposite of myself. I’m open more to the mystical side of things. Her mother is a very mystical person – they’re totally different, and I found that relationship very exciting as well.”

As a doctor, Kristín is called upon to deal with a various medical emergencies that befall the local villagers, with Ásgeirsdóttir benefiting from the presence of real doctor on set to guide her performance. Medical element aside, however, Fractures is a family drama set across three generations, while viewers will also meet Kristín’s friends and other families living in the village.

“She flees a situation with her teenage daughter to the town where she grew up, where there are her old friends she knew as a teenager. You will soon see there are events in the past that people have had difficulties dealing with, especially Kristín, so things that she was trying to suppress are resurfacing.”

Before shooting began on location in Grundarfjörður in the west of Iceland, Ásgeirsdóttir spoke with writers Kolbrún Björnsdottir and Vala Thorsdottir and director Eva Sigurdardottir, who also contributed to the scriptwriting. The actor also met with other cast members including Katla Njálsdóttir, who plays Lilja.

“She’s a real gem,” Ásgeirsdóttir says of her on-screen daughter. “With the key stories, we sat down and went through the scenes so that when it came to it, we had mostly gone over those key parts [before filming began]. And if we hadn’t, we did it [on set] before shooting. There were rehearsals and talks, and it’s so good to know your director is always open to dialogue, even when you’re on set and you know you don’t have a lot of time or space for it but maybe there’s something you want to discuss a little bit.”

The fact Icelandic drama is on the rise internationally hasn’t escaped the actor, who says every series from the country has its own style and tone. Fractures debuts locally on RUV on Sunday, while Reinvent International Sales is distributing the series worldwide. It will also air across Scandinavia as part of the N12 package of dramas picked up by public broadcasters including Denmark’s DR, Sweden’s SVT, Norway’s NRK and Finland’s YLE.

“They’re all very different and that’s what Fractures does as well. It brings lots of new elements I haven’t seen before,” Ásgeirsdóttir says. “It has a softness and warmth towards the characters. Maybe it’s because there are three women writing it and a female director. Also, in Iceland, we have mediums and people who practice with medicinal herbs – it’s something that’s deeply rooted in our culture, people seeing and sensing things and being connected to other elements. That is also a big part of the series.”

As Kristín, Ásgeirsdóttir “pulls you in. She’s so charismatic, you really want to follow her,” says Rúnarsson. “I’m sure the Icelandic audience will like this. It’s much more dramatic drama than we have seen in the past few years, but I think the appetite for it has been growing.”

That hunger for new drama also means productions are veering away from traditional Nordic noir series, though they are still immensely popular.

“We’re definitely avoiding doing only crime, that Nordic noir thing,” adds Rúnarsson, who recently had success with Black Sands. “But it’s still there and it’s always successful. That’s the battle we have. But interest in Icelandic drama has coincided with how audiences around the world are watching foreign-language shows and different genres. We’ve moved so far from 10 years ago where everything was American or British, but the demand for quality is rising as well. There’s no recipe for success other than believing in it and putting your heart and soul into it.”