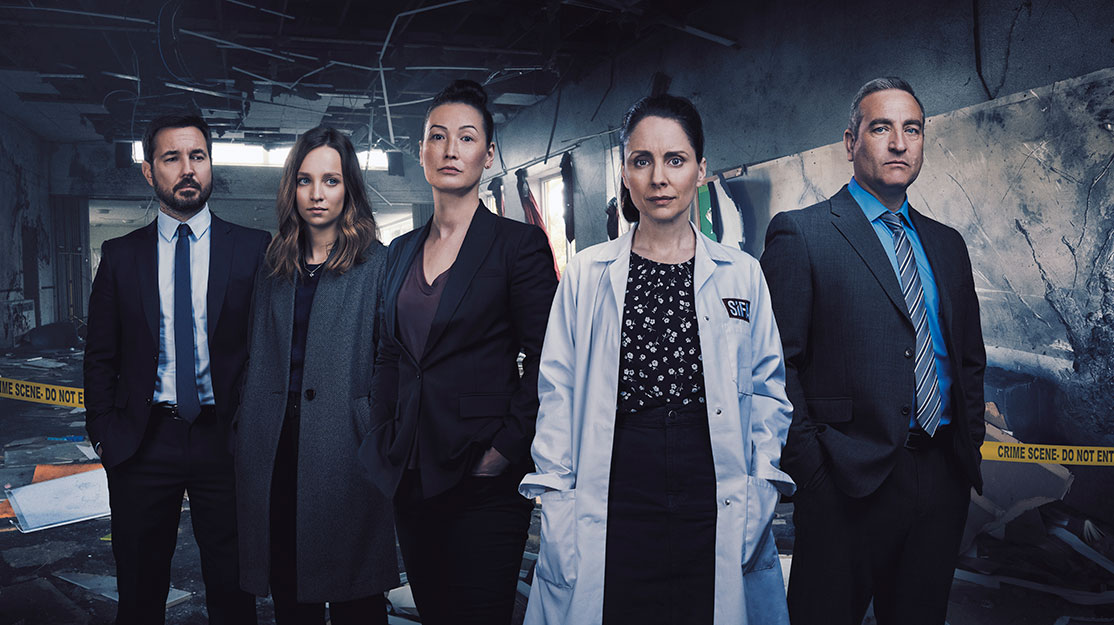 Picking up the pieces

Traces writer Amelia Bullmore lifts the lid on the science behind the forensically minded crime drama, which is back for a second season, and explains how she balances writing with her numerous on-screen roles.

When the pandemic caused production delays and shutdowns, UK pubcaster the BBC turned to a Scotland-set crime drama to plug a hole in its BBC One schedule. Traces had originally aired on UKTV crime channel Alibi in December 2019, at a time when the world was blissfully unaware of the impact Covid-19 would still be having more than two years later.

Then in January last year, Traces was repeated by the BBC, bringing a wider audience to the six-part series written by Amelia Bullmore and based on an original idea by bestselling crime writer Val McDermid.

Set in the fictional world of SIFA, the Scottish Institute of Forensic Science, season one starred Molly Windsor as Emma, a lab technician determined to uncover the truth behind her mother’s murder. While working with professor of chemistry Sarah Gordon (Laura Fraser), professor of forensic anthropology Kathy Torrence (Jennifer Spence) and DI Neil McKinven (Michael Nardone) to solve the case using forensic science, she also reconnects with her father, mother and her childhood friend, as well as falling for Daniel (Martin Compston).

Traces marked Alibi’s biggest launch since 2011, drawing more than 950,000 viewers across the season, and S2 is now set to debut on the channel tonight. The story picks up where the first run ended as the ramifications of uncovering Emma’s mother’s killer continue to reverberate, while the women of SIFA must carefully analyse evidence to help discover who is behind a series of bombings in Dundee, where the series is set.

The show is produced once again by Red Production Company (It’s A Sin) and distributed by BBC Studios. Bullmore returns to write the season with Jess Williams (Grantchester).

“I can remember going up to Scotland to do early research. Life was normal, although there was a feeling that something was coming,” Bullmore tells DQ about starting work on season two before the pandemic took hold in early 2020. From that moment, everything apart from cast readthroughs took place online until shooting commenced.

“I’ve still not met Jess [in person],” she admits, “and I’ve spent days with her on Zoom. It was nutty and mostly funny. In the end, we took the same pee breaks and the same tea breaks. I made sure we all had the same mugs, and Saskia [Abbott, script editor] would sometimes furnish us with the same biscuits. We made it as joined up as it could be but it was all far away. I came up to the attic every morning and staggered back down from the attic at the end of every day and did it all over again the next day, like lots and lots of people. It was odd.”

To television audiences, Bullmore will be most recognisable from her on-screen roles in Coronation Street, I’m Alan Partridge, State of Play and, more recently, Gentleman Jack, Vienna Blood and The Larkins. However, she has written creatively since she was a child, penning stories, plays and poems before joining a theatre group at university, where she would co-write the material she would later perform. When the group, Red Stockings, disbanded after touring the UK in a transit van for around four years appearing at universities, schools and community centres, she began to focus on screen acting.

“Then when I was about 30, a friend encouraged me to get writing,” Bullmore recalls. “She knew it was on my mind. She knew I wanted to and she was very positive about it. Since then, it’s been some sort of a mixture, although I’m never really in control of the mixture.

“You don’t know what’s going to take as a writer. If I have a lot of writing on, I am able to tuck in acting jobs that aren’t too demanding of time. Then, equally, if I’ve been in a play and if I’ve been far away from home, when you’ve got days [spare], that’s a perfect time to get writing done. It’s very fluid; there’s no master plan. It’s all a bit of a mess really. You do what you can when you can. If you take on too much, it’s very easy for it to be overwhelming.”

As a writer, Bullmore worked on shows such as This Life and Big Train before penning a number of episodes of Sally Wainwright’s crime drama Scott & Bailey. Now, working on Traces, you may think she has a penchant for crime – her acting roles also include parts in Ashes to Ashes, Scott & Bailey and Happy Valley – but Bullmore says the fact she frequently operates in the genre is “a longstanding accident.”

“Because crime is so popular, if you’ve got an idea or if you are asked to write something in that genre, it might have a better chance of getting made than something that isn’t,” she says. “If you’re acting, you’re also likely to be in crime things as well because they’re so abundant. Then before you know it, you look like you’re a crime writer. It’s quite a false impression. I can’t say that it started from a burning love of crime drama. It was more serendipity than that.”

Traces emerged from a non-fiction book McDermid was asked to write for a forensics exhibition at London’s Wellcome Institute. The book landed in the hands of a development executive at Red, who wondered if there was a drama series in it. The author then wrote a pitch for a potential series, which was set in the world of a university and populated by multi-faceted characters involved in teaching, working with the police and tackling elements of the law.

“It’s a natural precinct, but it’s got an incredible range of possibilities for the people there,” Bullmore says. “Val sketched out who those two key science heroines were – Kathy and Sarah – and she sketched out the quest of this young woman, Emma, who is looking for the truth about what had happened to her mum.”

Bullmore then spent time with the real scientists McDermid had worked with on her book to see if they were willing to consult on a series that would portray science as accurately as possible. They were, and Bullmore’s task was then to build the characters and relationships viewers would follow into this world.

For season two, the question was where those characters would go next after the events of season one. “The brilliant thing was that these relationships were in place so, by the time we did the second season, really good, humorous research relationships were set up with not just the scientists but also our police consultant and our legal consultant,” the writer says.

“They’d seen the first season and knew we hadn’t played fast and loose with what they had shared with us. They knew it worked and they knew who the characters were. All that heavy lifting was done.”

Beyond the relationship dramas, which see Emma and Daniel in court as the fallout from the search for her mother’s killer continues, season two focuses on the investigation into a spate of bombings that terrorise Dundee. With one of the show’s consultants specialising in explosives, that topic proved to be a natural avenue to pursue.

“Then, of course, when you’re looking at why people blow things up, you get into hate and all kinds of underlying reasons why people plant bombs and how bombs in particular terrorise people,” Bullmore says. “Even when there isn’t a bomb, once you know there are bombs going off in a particular place, everybody becomes scared. Psychologically, it’s incredibly rich territory; and scientifically, it’s also very rich because there are lots of different kinds of bombs.

“The other good thing is it means you’ve got jeopardy without necessarily having dead people. It’s very easy in crime to rely on another dead girl in the dump, for example, to keep the story going. But you can keep fear and tension going with the expectation of the dreadful thing that may be happening next and the race for people to get clues from the bombs. Then you’ve got the tension of the city desperately wanting answers. The characters in this season, they’re all tightly wound. To various degrees, they’re all on the point of exploding. It’s just a very good temperature to take to storytelling because it’s so volatile.”

Throughout, however, the story focuses on forensics, as the scientists race to find evidence from the bombs that they can pass on to police to help find out who is behind the attacks. Long, lingering takes focus on Sarah in particular as she examines pieces of one device, portraying the painstaking delicacy of the task at hand.

“Sarah Gordon and Kathy Torrence are absolutely riveted by what they do. They adore their work,” Bullmore says of the central characters. “Val’s idea was that [the focus on forensics] would be its USP. But the pilot wasn’t commissioned by Alibi, and when they picked it up further along the line, their need was to get the procedural stuff in because that’s what their audience wants. So all the way through, you’ve got to strike a balance between those things.”

Watching the series play out on Alibi, and later on BBC One, Bullmore was reassured that viewers engaged with the methodical time the cameras spend in the show’s laboratories and the magnified images that are often used to highlight tiny fragments of evidence.

Now, as the show returns to Alibi for its second season, the writer praises the “brilliant” cast for their detailed and involving performances that mean viewers will want to see where the characters go next.