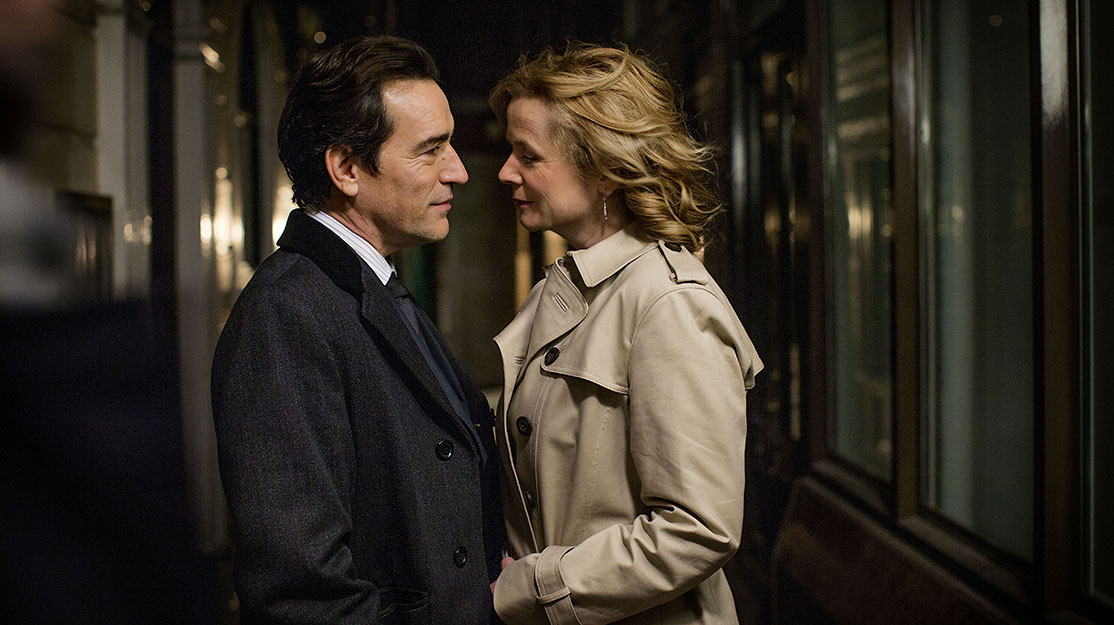 Pick of the bunch

It’s described as a provocative, audacious thriller that has won legions of fans around the world. Louise Doughty’s novel Apple Tree Yard has sold more than 250,000 copies in the UK alone, and has been translated into dozens of languages since it was first published in 2013.

Now this gripping story is coming to television, after BBC1 in the UK commissioned a four-part adaptation from Kudos, the makers of Broadchurch, River and Utopia.

Married with two grown-up children, Yvonne Carmichael (played by Emily Watson) lives a contented, conventional suburban life. But her world spirals into chaos when a chance encounter leads to an impulsive and passionate affair with a charismatic stranger (Ben Chaplin).

Despite all her careful plans to keep her home life and career safe and separate from her affair, fantasy and reality soon begin to overlap and everything she values is put at risk, as a life-changing act of violence leads to a trial.

Written by Amanda Coe and directed by Jessica Hobbs, the executive producers are Manda Levin and Lucy Richer. Due to launch on BBC1 on January 22, it is distributed by FremantleMedia International.

Here, Amanda Coe and Manda Levin reveal how they brought Apple Tree Yard to television after being captivated by Doughty’s original novel.

Manda Levin: Kudos has a head of literary acquisitions, Sue Swift, who pans for gold, and when she is as excited about something as she was about Apple Tree Yard, we sit up and take notice. Apple Tree Yard was literary catnip to the women in Kudos. Here was a compelling page-turner which was about so many other things that matter to us deeply; our self control versus our most atavistic impulses, nature and nurture, the stories we tell ourselves, the mystery of the ‘other,’ the sheer hard work of being ‘good’…

Part of its cleverness is how the story segues between the visceral excitement of an affair into a shocking act of violence, and then the intensity of a great courtroom drama, giving all its rich themes a gripping narrative musculature. We took it straight to one of our favourite screenwriters, Bafta-winning Amanda Coe (Room at the Top), whose elegant, grown-up approach seemed perfect for this most precious prize. She was extremely patient with our hagiographical excitement about the prospect of an adaptation. But we certainly weren’t the only TV producers in town who had their heart set on optioning Louise’s incredible novel.

Amanda Coe: I read the book in a day, as gripped as its many other fans. I get sent a lot of books with a view to adaptation, and the ones that I’m least seduced by tend to be thrillers. Not because I don’t enjoy reading them, but because I’m loth to commit to spending months of writing time on a piece that is purely plot-led or sensationalist. It’s a bit like spending days in the kitchen to produce a packet of crisps — why not just pop out to the shop? Also, I find the violence against women in TV thrillers problematic, to say the least. But Apple Tree Yard so clearly uses the tricks and pleasures of the genre to sophisticated and thought-provoking ends, while never losing its grip on the narrative. It’s a rare beast. Less high-mindedly, I was also excited by the opportunity to explore such different registers: sexy affair! Crime! Court room! Family drama!

I’d never been involved in a pitch to an author, but Louise was generously responsive to our approach, as well as unusually understanding of the need for me to take on the book and turn it into something that stands alone in a different medium. A lot of the book’s power resides in its tight first-person identification with Yvonne, who is an unreliable but compelling narrator. On the page, we experience every moment through her eyes and soul. The great challenge in making the transition to screen is to retain that audience sympathy with her character, given a much more external aesthetic. Crucially, apart from a few tiny moments, every scene has Yvonne in it. Clearly we were hoping to attract an actor of Emily Watson’s calibre to take us on the journey, and how lucky we are that she agreed to do it.

The story felt like it had the legs for four parts, giving each episode a different pace and texture, while shading in the complexities and contradictions of Yvonne’s character. Back-story, so organic to prose, clogs up the flow of a screen narrative, so I took the decision to run the unfolding crisis in Yvonne’s marriage to Gary alongside her affair with Costley. On screen, it makes the question of marital loyalty, as opposed to purely sexual fidelity, even more morally crunchy than in the book. For me, it tips the TV Apple Tree Yard towards a drama that asks questions about the mysteries of marriage and family life as much as a thriller about a woman’s sexuality on trial.

While writing the scripts I had the luxury and pleasure of proper time with Jess Hobbs, the director, so that every nook and cranny of the world and the story had been interrogated and explored before a single frame was shot. I think this attention to detail, both material and emotional, shines through in every moment Jess has put on screen. She has a wonderful mixture of rigour and empathy.

Levin: Something we hope feels pioneering in Apple Tree Yard is the portrayal of a middle-aged woman enjoying her sexuality. At the beginning of the story Yvonne is at a moment of transition, when women evolve from being extremely visible to virtually invisible, but crucially, she’s captured at the moment just before she accepts that fact. Having done everything so very right for so very long, on some level Yvonne believes she deserves this last fling. Before everything goes wrong, she’s lit up by her affair with Mark Costley in a way we’re not used to seeing on screen.

Unfortunately, something we fear may also feel pioneering is having a middle-aged woman as the protagonist at all, the person to whom things happen and who makes things happen in their turn. Yvonne isn’t just a mother, or a daughter, or a wife, or a ‘career woman,’ but all of those and a lover to boot – a complex, contradictory leading lady, portrayed with courage and passion by the extraordinary Emily Watson.

Our aspiration for the show is that the audience will walk in Yvonne Carmichael’s shoes for four gripping episodes. And along with judging her – whose transgression has such catastrophic and punitive repercussions – they might flip the mirror to reflect on our society’s rush to judgement of all women, and in particular those who own their sexuality.