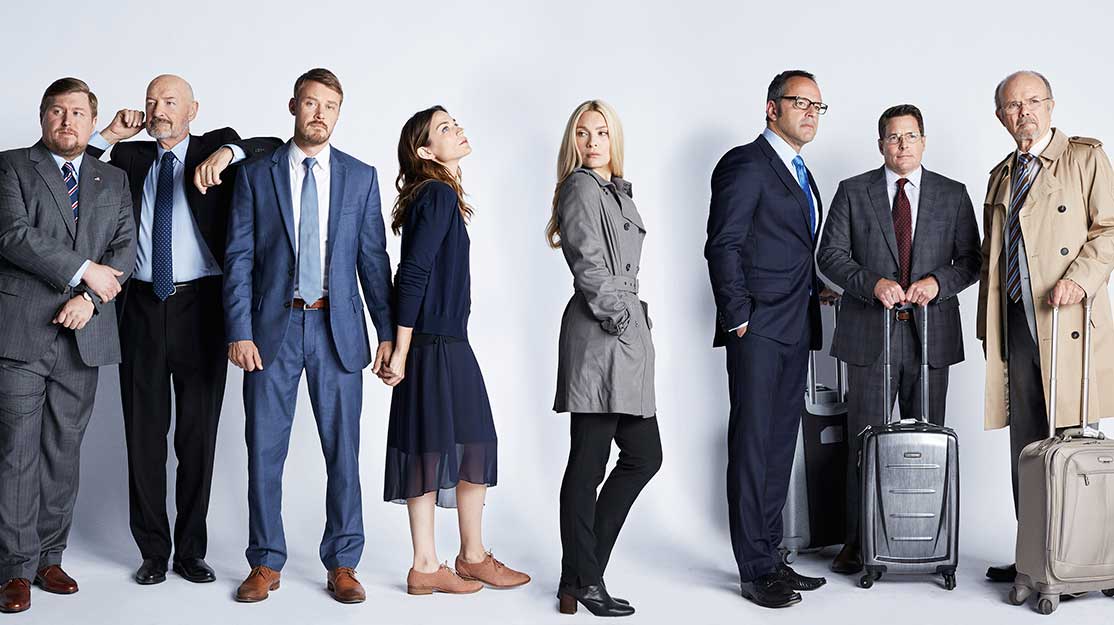 Michael Dorman and Terry O’Quinn lead the line in Patriot, Amazon’s latest original drama, which centres on the complicated life of a US intelligence officer. They tell DQ about their father-son relationship on screen and the unique style of showrunner Steve Conrad.

Since November 2015, visitors to Amazon Video have been able to tune into the pilot episode of a spy thriller called Patriot. That enough of them watched it and, more importantly, liked it means that 15 months later, nine more episodes are now available to subscribers to complete the 10-part first season.

The opening episode introduces viewers to the complicated life of intelligence officer John Tavner, whose latest mission is to prevent Iran from becoming a nuclear power. To do so, he must go deep undercover as an employee at a Midwestern industrial piping firm.

However, a bout of PTSD, the federal government’s incompetence and the challenge of keeping his day job lead to an ever-increasing number of fiascos that threaten the entire operation.

Focusing on the less glamorous aspects of spying, Patriot sees Tavner struggle with situations that force him to choose between bad alternatives and his efforts to conceal his plan, often leading to matters unravelling further.

With the pilot shot in Montreal and most of the series set in Chicago, in addition to visits to Prague to film the European-based exterior scenes, joining Patriot was a chance for Dorman to venture outside Australia for the first time. The actor began his career in the theatre before moving into TV and film down under.

“This one was a whole new playground for me,” he tells DQ at the Berlin International Film Festival, where Patriot received its world premiere. “I’d never worked in the new way of delivering content and, even though it’s a TV show, the way the creative team approached it was that it is more like a film. I guess we look at it like it’s a 10-hour film we’ve shot in a really small amount of time.”

The actor admits he enjoyed the pilot script so much, he knew immediately that he wanted to be a part of it.

“[Writer/director] Steve Conrad’s writing is unique compared with any other writing,” the actor continues. “He’s got his own style and it’s got a real rhythm to me, and that’s what excited me. Also, it was the fact I was laughing out loud. You read so many scripts and, with some of them, you’re pushing yourself through it. This one I couldn’t put down.

“I remember reading it in bed, which is something I don’t normally do, and emailing my team as soon as I finished, saying I had to be part of it. I was just reading it and for me it was more about the process of how we could make it happen.”

Dorman describes his character as having an “amazing ability to remain composed when the world around him is falling apart; he’ll make whatever decision he has to take at the very last moment, whether he likes it or not.”

The show goes on to explore the consequences of those decisions, which usually lead Tavner into increasingly sticky situations, while also analysing his job affects his character. Music subsequently becomes an outlet for Tavner to reveal his inner-most thoughts, and scenes in the opening episodes show him playing some of his own songs to a crowded bar, much to the exasperation of his brother Edward, who is cajoled by their father to keep an eye on him.

“He’s the perfect intelligence officer in the sense that, no matter how he falls, he’ll get back up,” Dorman says. “And he’s someone who can think on his feet and decide the best way forward when every way is a bad way. So he goes with the least bad way, but he’ll still do it. The conventional style is someone who can fight off every threat.”

The series can be shocking, not least in the opening sequence when Tavner goes to great lengths to win a job at the piping firm by pushing a rival jobseeker under a truck. But it’s also laced with black humour that goes hand in hand with the sense of doom enveloping the spy’s mission. This is evident in one fight scene when Tavner must escape from the grasp of five Brazilian brothers who suffocate him with jiu-jitsu holds.

“We worked a lot and we worked hard,” Dorman says. “I was completely invested, my heart was in it the whole way. It never felt like a burden, it always felt like a gift. And to be working alongside people who have been telling stories a lot longer than me, to grow from them and learn from Steve about the craft in storytelling, it was pretty inspiring for me.”

It was music that helped Dorman connect with his on-screen father, actor Terry O’Quinn, a hugely experienced character actor best known for starring in Lost.

“When I first met Terry in the pilot, we had to do a duet of an old song by Townes Van Zandt called If I Needed You,” Dorman reveals. “That was a great way to meet him and enjoy spending time with him – and then it became something that we just always did. We always had our guitars on set or if we were off set we would just play music together and you see it on the show. It was the best of both worlds.

For O’Quinn, writing is the crucial factor whenever he’s looking for a new project. “It’s the script, then it’s who we’re doing it with and where we’re doing it, then what we’re going to eat and what hotel I’m staying at,” he jokes. So what was it about Patriot that encouraged him to sign on for 10 episodes?

“I just loved the story,” he explains. “Steve Conrad’s dialogue was very particular. He’s one of those guys who, when he writes a period after a word, he obviously wants you to pause in all those places. He’s somebody who’s very meticulous. I’d also seen his work before [The Pursuit of Happyness, The Secret Life of Walter Mitty], so that recommended him to me.”

O’Quinn also believes Patriot goes beyond just being a spy thriller, also fulfilling the role of a family drama in which the central characters are always helping each other out of trouble.

“When I describe it to people, I say there’s some international intrigue, some politics; it’s sort of spy thing, sort of dark comedy,” he admits. “It’s hard to describe!”

O’Quinn adds that working with Amazon has been “terrific,” not only because of the democratic way the streamer uses viewer feedback as part of its commissioning strategy.

“I don’t know why the networks don’t do that now,” he says. “All the networks should show a pilot one night and say, ‘Call us up if you like it and we’ll make some more.’ It makes perfectly good sense.

“Amazon gave Steve a lot of freedom to do what he wanted to do and shoot what he wanted to shoot. Steve and Jimmy [Whitaker], our cinematographer, were so prepared and so precise in what they wanted to shoot. They didn’t waste a lot of time, they didn’t shoot a lot of stuff they didn’t need. It was very clean and that sets the actors free. But Steve is so precise and particular. He could say things like, ‘Could you not blink in that line?’ and you’re like, ‘OK.’ I love it. I like working with someone who knows what they want.”

As a viewer, O’Quinn reveals he’s a fan of Game of Thrones – “My girlfriend got me hooked” – and British period drama Peaky Blinders. But there’s one show from his own CV that is still a talking point almost seven years since it finished.

“Lost was one of those ultimate experiences,” he says of the ABC drama that has proven to be one of the most talked-about series of the last decade. “It’s a one-off. There was nothing like it and I’ve never had an experience like it. I’m forever grateful for having been in it and I enjoyed it immensely.

“We were shooting in Hawaii, we all got along great and the set was a happy place. So after that, for a while, I’ve compared everything to it and it’s a pretty hard thing to come up to. But this [Patriot] comes pretty close. If we’re able to do this for a while longer, it would be akin to that.”

With hints of a cliffhanger ending at the conclusion of season one, it seems Conrad’s intention is to return for a second season – something Dorman would also be keen to see.

“I wouldn’t turn away from this one [for a second season],” he adds. “The character was great but it was more about the project as a whole and the people working on it that I found were rare gems. Steve Conrad, Jimmy Whitaker, [camera operator)] Jody Miller and all the producers who were onboard were all like-minded. I didn’t feel like there were too many chefs in the kitchen. Everyone was on the same page. That’s the element I would love to be a part of again.”