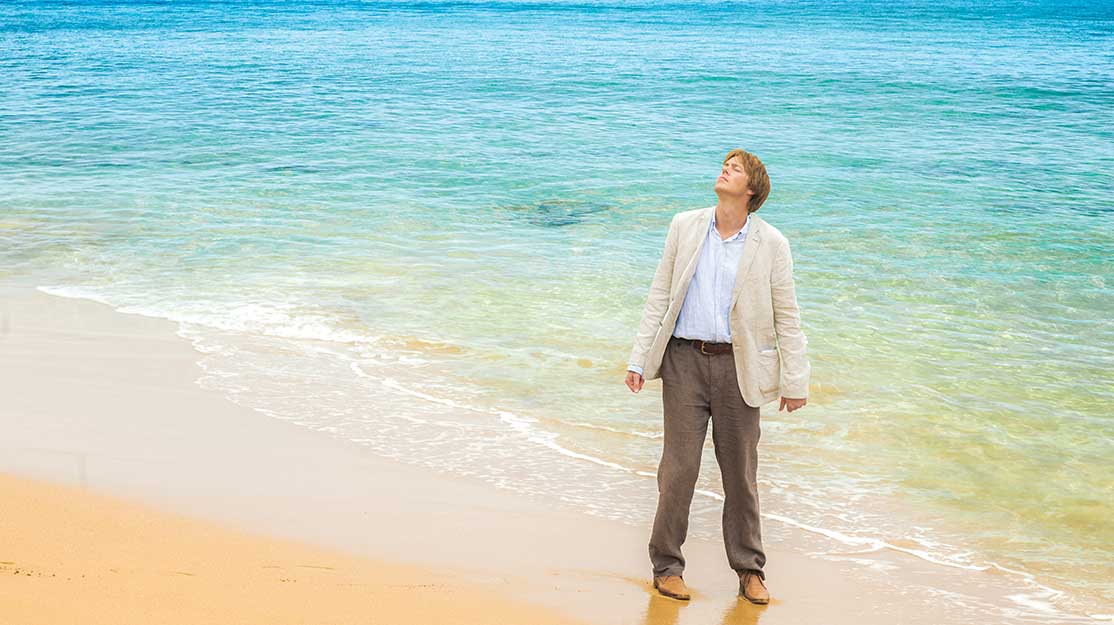 Not long ago, Robert Thorogood couldn’t get his foot in a production exec’s door. Now, the Death in Paradise creator is writing a series that caters for audiences in more than 200 countries. He gives DQ the inside track on his journey and how he makes the show work.

Robert Thorogood’s life has to some extent been a story of all-or-nothings. Five years ago, he was one of the thousands looking to make his first mark on the TV industry, having already spent years trailing from one production boss to another looking for someone to take his scripts.

His latest idea – a drama about an expat policeman working in St Lucia – was, as he readily admits, a tricky sell. Shooting in the Caribbean for five months straight was hardly going to make for a cheap show, and producers just weren’t interested in such an ambitious concept from a first-time writer.

Thorogood’s pedigree was solid enough, though. Having spent 15 years as a script reader, he had also sold a number of treatments to production firms across the UK and been commissioned to write three original scripts for the BBC and ITV. But by 2010, the only show to have been penned by Thorogood and produced was an afternoon play called From Abstraction, broadcast on BBC Radio 4.

Despite his ambition and confidence, the affable and remarkably honest Thorogood admits that, as he approached 40, he began to consider careers away from writing. It was only after an encounter with Tony Jordan at London-based Red Planet Productions that Thorogood finally got the break that would ultimately enable his Death in Paradise concept to become one of the most widely sold shows in the world.

Thorogood met Jordan after the producer set up a competition for ‘new’ writers. And although his ‘policeman in St Lucia’ idea did not claim the top prize, it was a finalist and, most importantly, caught Jordan’s eye – laying the groundwork for the two to work closer together. “He ignored the problems of making an expensive show in the Caribbean and decided to do it anyway,” Thorogood says of the Red Planet MD.

It turned out to be a pretty good call. The show was championed by Jordan, whose track record with such series as BBC1’s Life on Mars and Hustle saw him welcomed into the offices of TV commissioning execs across the UK’s capital. BBC eventually greenlit the show, and Death in Paradise – via the broadcaster’s commercial arm – has gone on to become a global juggernaut, airing in more than 200 countries. It’s now set for a fifth season on the UK pubcaster’s flagship channel next year.

The show has faced down its fair share of troubles, however – not least in getting around the financing issue. The solution was to create a coproduction between the BBC, its commercial arm BBC Worldwide and France Télévisions, with Red Planet and France’s Atlantique Productions at the coalface out in Guadeloupe making the show. The setup got Death in Paradise off the ground but it also meant there were regular competing interests that demanded subtle – and not so subtle – changes to the scripts.

Such contrasts were magnified on subjects like physical humour – something the French were keen on but that the British disliked – and it was up to Thorogood and his creative team to devise a script that pleased both parties, conceding just enough on all sides to please everyone involved.

In a similar vein, British Primeval actor Ben Miller was cast as the lead detective, while French film star Sara Martins was brought in following roles in Little White Lies and Tell No One.

The balancing act continues today, but Thorogood now has the ominous task of pleasing viewers across the world. He admits characters are now developed at the start of a series with hundreds of potential buyers in mind, meaning the show’s scope has become much more global. “At a strategic level, when we create the characters we absolutely have that international outlook,” he says. “When we replaced Ben Miller, who was playing an uptight Brit in a suit, we wanted another archetypal Englishman, a Hugh Grant in Four Weddings and a Funeral figure – someone a bit posh, lanky and middle class, because that plays around the world.”

The answer to that particular conundrum came in the form of Kris Marshall, of Love Actually fame, whose arrival in the third season had the desired effect. The show was able to continue where it had left off, playing to some of the stereotypes attached to an Englishman living a tropical country.

Commercial needs have also shaped the format of Death in Paradise, which consists of self-contained episodes that “reset” at the end. It’s a key facet of the show’s “ongoing financial health,” Thorogood says, and is one of the reasons why the series can, to an extent, be shown in any order, anywhere in the world.

Thorogood admits the show has had to deal with “revolving doors with actors,” but insists the changes have injected a freshness into the whodunit, which is now 32 episodes old and counting. The forthcoming exit of another (currently unnamed) star, however, is leading Thorogood to adapt the show’s structure, with a focus on producing episodes that are even more “standalone” in nature, centring on one main character each week. “It’s the sort of challenge I hope will make it a richer and more rewarding experience,” he says.

Despite the show’s global success, its creator – like many creatives – remains cautious about the long term and eager to work out where he’s going next. There haven’t been any huge dips in ratings from viewers, and BBC Worldwide, which sells the show abroad, has found buyers ranging from PBS in the US to AXN Mystery in Japan.

But much of Thorogood’s wariness is born from the same sort of concerns held by the production companies that repeatedly shut the door on him five years or so ago. And that’s led to a “mad bollock, kick, scramble,” he admits, as he ensures that once the boat sails away from Death in Paradise for the last time, he’s not left alone on the island. “As far as I’m concerned, the financing of the shoot – which takes place in Guadeloupe – makes it inherently unstable. We have to sell in those 200 countries because we have to earn so much money to break even,” he says.

“So when the show was greenlit and it became successful, I got a publishing deal to write a Death in Paradise novel. I love the murder mystery genre and I was aware that one day the show will be cancelled – not because it gets bad but because it’ll just become too expensive to make.”

The show’s success made last year one of the busiest of Thorogood’s life, as he juggled writing the novel with his existing responsibilities on the TV show that made him. “If you’re a writer, or any sort of creative, you really need to keep moving forward. So I’m also doing what I’ve always done: I come up with ideas and pitch them, but now I’m lucky enough to have some production companies coming to pitch ideas.”

Several of his projects are already placed at the BBC and ITV in the UK, and he is currently waiting for their notes and decisions. Other than that, it’s “hustle, hustle, hustle,” he says, with future ideas being noted, developed and ultimately pitched.

“I don’t actively have any other shows that have been greenlit,” he adds, providing an insight into the temporary world that a TV writer inhabits.

“We greenlight very few new shows here in the UK each year because, luckily, the schedules are filled up with returning series like mine. Trying to get the next thing off the ground is still just as hard as getting that first thing of the ground.”

The difference this time, though, will be that Thorogood has that all-important first credit to his name to not only open doors out but also attract producers and broadcasters alike.