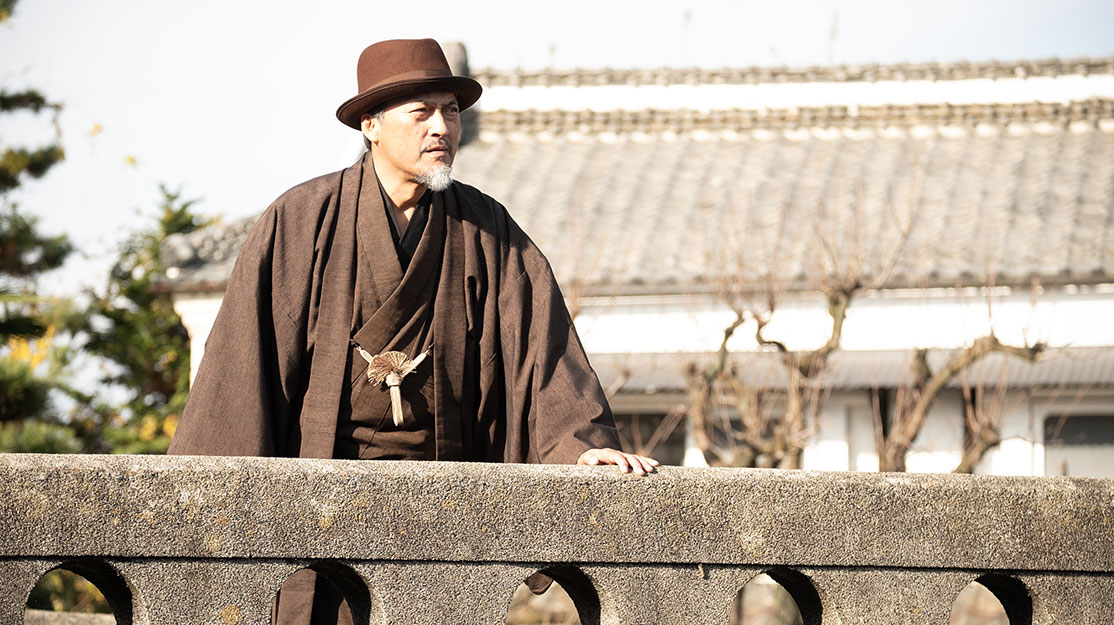 Japanese director Kazutaka Watanabe introduces NHK’s film An Artist of the Floating World, based on the novel by Kazuo Ishiguro and starring Ken Watanabe as an ageing painter revisiting his past.

Nobel Prize-winning author Kazuo Ishiguro’s novel An Artist of the Floating World is considered one of the best novels ever written, telling the story of an ageing Japanese painter who looks back on his life and how his role in the Second World War has changed attitudes towards him and his paintings.

It has now been turned into a one-off drama, produced by Japan’s NHK and distributed by NHK Enterprises. Ken Watanabe (The Last Samurai, Batman Begins, Inception) stars in the lead role of Masuji Ono.

Here, director and executive producer Kazutaka Watanabe talks about taking on the adaptation, casting Watanabe, working with Ishiguro and shooting in ultra-high-definition 8K for the numerous dreamlike sequences in the story that explore Ono’s memories.

Why did the project appeal to you?
I thought it would be a very interesting story to take on, but I also recognised that it was a view of the world that would be quite difficult to portray in a drama. It was a challenge to find the delicate balance between the world and art of Kazuo Ishiguro and a drama that had entertainment value. After it aired, I was prepared to be criticised for making it difficult to understand, but that wasn’t an opinion I heard very much.
The novel is one of only two that Mr Ishiguro has set in Japan. After he won the Nobel Prize in Literature in 2017, I approached him and told him I wanted to adapt An Artist of the Floating World for television in Japan. Mr Ishiguro is known for nuanced depictions of human emotional complexity; the way he sees and describes the world is inimitable. I stayed as faithful as possible to the novel’s vision.
My work was a constant search for ways to overcome artistic challenges and simultaneously create entertainment value.

How was Kazuo Ishiguro involved?
Mr Ishiguro was very generous, saying, “Do whatever you want with this.” Paintings are a key element of the story and we asked three different painters to produce them. When Mr Ishiguro saw them, he told us it was like the artists were “looking into his mind.” I didn’t give any specific instructions to the painters, so I was very impressed to see that, as artists themselves, they were reading into the novel on a whole other level.

How did you cast Ken Watanabe in the main role?
As I read the novel, Ken Watanabe was the only person I pictured in my mind. Mr Ishiguro also supported the suggestion, saying that he would love for him to play the part, and we were able to meet with him in London. The protagonist, Masuji Ono, keeps his inner turmoil under wraps and presents a calm facade to the world.
I asked Mr Watanabe to play the lead because I believed only he could express this kind of emotional complexity. I understand Mr Ishiguro felt the same way. I never gave Mr Watanabe any detailed directions but I felt like he was enjoying the role even as he struggled with it. A first-person narration by an unreliable narrator is a characteristic of Ishiguro’s works and Mr Watanabe did a splendid job portraying this difficult form of expression.

What was your visual approach behind the camera?
The experience was practically stress-free. We shot in 8K, which was not much different from shooting in 2K, but when I saw the images in 8K for the first time in the editing room, I did realise one thing – when we shoot indoors, the outdoors gets washed out in 2K, but that doesn’t happen in 8K. Everything is exposed, so there’s no faking it. I thought the dark tones were expressed beautifully.
The smell of burning and images of brightly burning flames are symbols in the novel. I worked hard to effectively represent this visually using flames and ashes. Thanks to 8K, the images are so realistic that they stimulate other senses. Viewers can almost sense the heat of the flames and the smell of burning paper. Other visual aspects, such as the vivid colours of Japan’s autumn foliage and the shadows in a traditional Japanese house, are also brought out in a unique way by 8K. I feel that 8K has opened up a whole new world of exciting possibilities.
Mr Ishiguro has a unique and distinctive view of the world. I wanted to stay as faithful as possible to that vision. Although the story is set in Japan, the theme is universally relatable and speaks to each and every person. I hope it will be received by a diverse audience.

tagged in: An Artist of the Floating World, Kazutaka Watanabe, Ken Watanabe, NHK