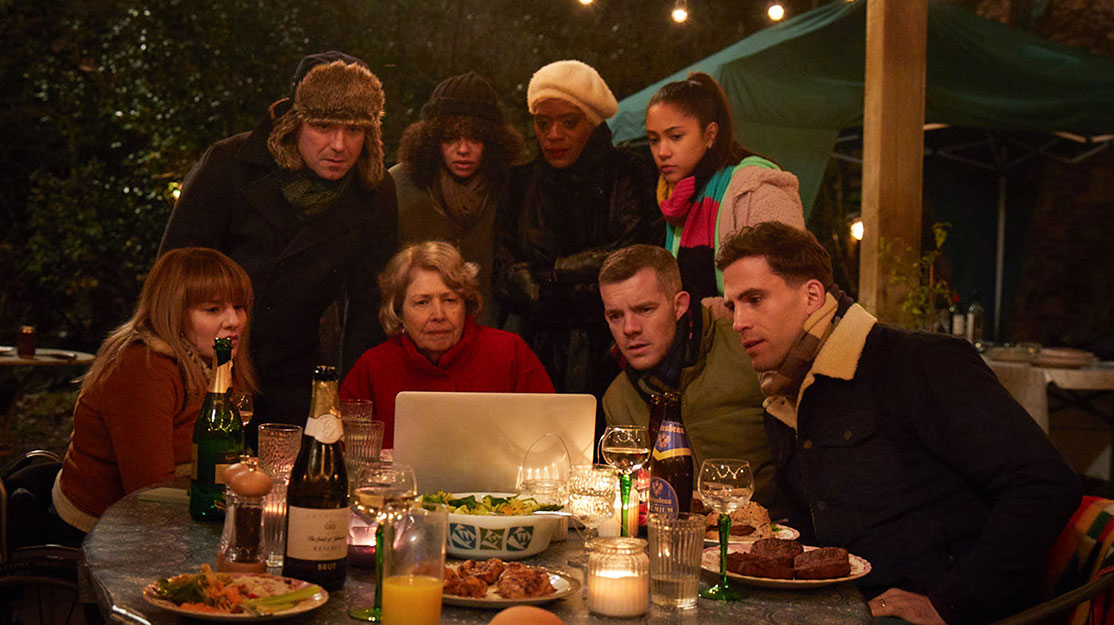 Russell T Davies, the creator and writer of series including Queer as Folk and Years & Years, opens up about his career, being a showrunner and writing about ordinary people in extraordinary circumstances.

With a career spanning more than 30 years, Russell T Davies is one of Britain’s leading television writers. Having started working on children’s series and soap operas, he rose to prominence as the man behind Channel 4’s groundbreaking Queer as Folk in 1999 and has gone on to create dramas such as Bob & Rose, Casanova, Torchwood, Cucumber and Years & Years, as well as overseeing the 2005 revival of the BBC’s iconic sci-fi series Doctor Who.

During the digital edition of French television festival Série Series, Welsh-born Davies spoke about the resonance of dystopian drama Years & Years (pictured above), creating a voice for gay characters and his upcoming Channel 4 series Boys, which follows a group of friends through the 1980s AIDS crisis.

Davies looks for stories set in worlds where no one has ever been…
I could write a cop show or a detective show, but I’d rather write stuff that is off the beaten track or stuff other people don’t do. Part of Years & Years is me thinking there’s such a disconnect between real life and drama. Surely drama should be about real life. Theatre can turn around [stories] quite quickly but film and television is very slow. Three years could have passed. There’s just a gap between it and the world, and I wanted to close that gap. We should all be sitting up. Although Years & Years was set in the future, it was a metaphor for now.

Davies began his career working with people who would go on to become some the UK’s biggest drama writers…
I worked at Granada Television, a powerhouse of drama and popular drama. Paul Abbott, who invented State of Play, very much looked after me. Kay Mellor [Fat Friends] looked after me as well, and Tony Wood [The Only Way is Essex]. They were colleagues, but I was so lucky. It was the 90s and Granada was very inventive. They were more free with money, so they could invent.
I was trained in soap operas, and one of my favourite jobs was as a storyliner on soap operas. There are all sorts of faults with soaps, but the one thing it teaches you is to never run out of story. I have carried that through my training ever since. You can’t give up, you can’t be short of story. It was great training.

Davies took the title of showrunner for the first time when he was approach to handle the resurrection of Doctor Who…
I didn’t run an American system. I lived in the US for a few years and watched people working there. What we think of as the American [writers] room isn’t always the case – shows are run however the showrunner wants to run them. [Current Doctor Who showrunner] Chris Chibnall now has a room, but I did all the long-term arcs and then brought in individual writers and had one-to-one meetings with them, which I still prefer.
I ran a room when we took [Doctor Who spin-off] Torchwood to America, but they might be some of my weaker scripts. I don’t think the room suits me in particular. I’ve reached a stage where I just like to do my own thing.

Queer as Folk, about three gay men living in Manchester, was a story that had been growing in Davies for as long as he had been a writer…
Working on soap operas, I always put a gay character in, which makes me sound very militant, right-on and dedicated to the cause, which I am, but it was entirely natural to me. I was working in a company that was very accepting. I’ve never come across a commissioner who had doubts about including gay or trans characters. It’s a very liberal, forward-thinking industry.
If you looked at [my career from] 1990 to 2000, it’s a string of soap operas and me writing children’s programmes with certain characters ‘coded,’ where you would look at one woman and say, ‘She’s a lesbian character.’ She doesn’t say so, it’s me talking code. I came to soap operas and I invented a lesbian vicar, a gay schoolboy coming out and a marriage in which the groom was bisexual and having an affair with his best man. If you study that, you see the development of my work.

But before Queer as Folk, Davies created a hotel-set drama called The Grand…
It was like Downton Abbey, but it really wasn’t working. I invented it but it was foisted on my shoulders. Every week the ratings went down. Towards the end, I wrote what I wanted to and made one of the characters gay, a working-class man in the 1920s played by Paul Warriner. The standard of my writing went up and suddenly I wrote well. That episode was markedly better than anything else I’d ever written because I’d written from my heart. That was seen by Channel 4 and that led directly to Queer as Folk.
If I was inventing my life story, I would say I was dying to write Queer as Folk but the establishment wouldn’t allow it, and it took me 20 years to get on screen. But back then, in the 1970s, 80s and 90s, there were no gay dramas; I didn’t think I could do a gay drama because it didn’t exist. Once they said it, the doors were open, and it’s been my life ever since.

If Davies has an approach to storytelling, it is to see extraordinary things from an ordinary person’s perspective…
I could never have written The West Wing but, if had written it, I can guarantee you the story would have taken place among the secretaries and staff, in the canteen. It would have been them observing the machinations of power while the president strides past. I’m not the sort of writer who writes, ‘The president walks into the room.’ In The Grand, the heart of the show was downstairs among the staff.
With Doctor Who, my greatest invention was probably Rose Tyler [played by Billie Piper], the ordinary woman from an ordinary council estate with a funny mum, who lived the most ordinary life on Earth but realised her life wasn’t ordinary.
Years & Years is an ordinary Manchester family, as we all are – just pawns of huge events happening around us and yet realising we’re not pawns, we’re the ones with the vote, we’re the ones who made it happen, we’re the ones who like our comfy evenings with tea, the curtains closed and being comfortable at the expense of the greater picture sometimes.
It’s an approach that works for me. That’s just my instinctive path into a story. Maybe I should do something else! All writers talk about finding their voice, but I do think writers get stuck in their voice as well. They develop their own schtick. You need to be aware of that too.

Davies loves calling his work ‘gay drama…’
I have no problem being called a gay writer; I love it. I’m immensely proud of it. I started with The Grand with gay men in the 1920s, I did A Very English Scandal covering the 1950s, 60s and 70s. My next series is Boys in the 80s, Queer as Folk was in the 90s, Cucumber was in the 2010s and Years & Years took gay men forward to 2030. I’ve covered a whole century, I’m delighted!
The only way I can write is to be honest. When it comes to gayness, you find yourself in some uncomfortable areas. All dramas are about the problems and the conflicts, so that’s where I go.
Something like Cucumber, it wasn’t particularly successful. It was well regarded and won awards, but it didn’t get a great audience because it was a very tough piece of work. It was a very risky series that only said what it was about after eight hours in its very last line. It’s true, it’s honest and it’s right, and I’m proud of it on those terms. You might not like it, you might not like the story, you might not agree with it, but you can’t deny that it’s true. That’s the direction I head in.
Years & Years spent six months not being commissioned because the original scripts were a lot tougher on that family, on every single character. Everyone was a bit more selfish. In fairness to the BBC, they said, ‘This is hard and the drama is hard, the passage of time is hard. Can’t you warm up the family for us to have something good to cling to?’ And they were right. I’d been so focused on my idea of truth, I’d forgotten to welcome people in.

He would hate to be a young writer, starting out in the age of social media…
I knew back in 1990, when I wrote my first character, that when you put a gay character on screen, people will complain. Gay people will complain, never mind straight people. I know full well gay people complain, partly because I’m that person as well. We’re so starved of our own representation – and it’s the case with lesbian and trans characters – that if the representation on screen isn’t absolutely us, we object.
Straight people have 2,000 years of experience ahead of us here. They’re used to translating experiences and can recognise any character is going through what they would go through in those circumstances. But you could have a gay teacher [on screen] who’s exactly like someone and he wouldn’t recognise himself. That’s also the truth. It’s hard to see yourself, and I’ve done that. I’ve done living representations of people cast with absolute accuracy and I have sat and watched the real-life person watching say, ‘That’s ridiculous.’
You cannot win, and because you can’t win, just go ahead and write whatever you want to write – the hard work then is making it honest, truthful, real, imaginative and watchable.
I would hate to be starting now as a young writer with Twitter. You have 100,000 voices swarming like bees ready to tell you you’re wrong, and they especially attack women and writers of colour. To be 18 or 21 starting your scripts now means you have to be made of steel. Writers are made of steel; I don’t want to put people off. No matter how insecure, whimsical and scared they are, if they are writing, they’re made of steel. But to be starting out now, that is hard.

Davies’ next series, Boys, fits his own life…
Why didn’t I write this first? It’s just about a group of friends in London in 1981, in the decade in which AIDS appears, so it’s their lives being lived as this increasing danger gets closer and closer towards them. I was 18 in 1981; it fits my life. I didn’t have to do much research about what music we were listening to, because I was there. I did it all and I felt that stuff. It needed all these years for me to come round to look at something as devastating as the AIDS epidemic.
I wonder what I would have written 20 years ago or 30 years ago. Maybe it would have been better. I am glad I’m this sort of writer now. I’m glad I had the maturity to look at it, but I’ll always wonder what it would have been like if I’d written it in 1990.