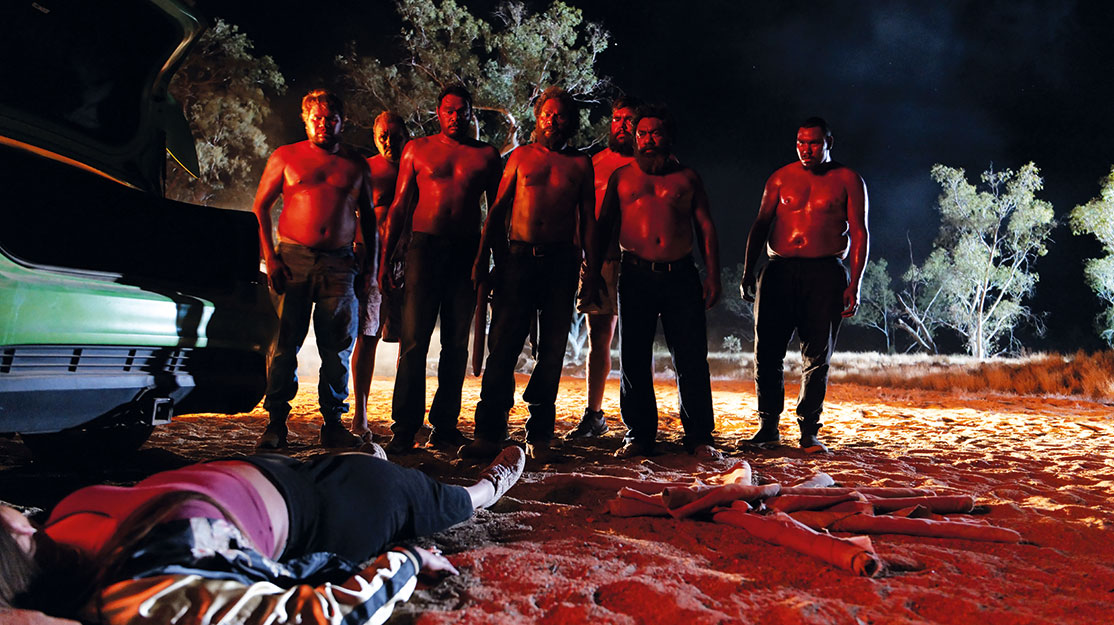 Outback with a bang

Australian series True Colours breaks new ground as a crime drama set within a First Nations community. David Jowsey, co-MD and producer at Bunya Productions, explains how the four-parter takes viewers into a world they won’t have seen before.

As viewers around the world continue to embrace foreign-language series, a four-part crime drama is set to herald a first for Australian television by featuring the First Nations language of Arrernte.

True Colours begins with an investigation into a car accident that soon turns into the hunt for a killer. Thirty percent of the series plays out in Arrernte, with the action taking place against the backdrop of the Macdonnell Ranges, east of Mparntwe (Alice Springs), deep into the Northern Territory.

Aboriginal detective Toni Alma (Rarriwuy Hick) is assigned to the case in Perdar Theendar – the community she left as a child and has had little to do with since. As the clues lead back to her own family, Toni has to navigate her way between the white and black laws and the complexities of the Aboriginal art world to find a killer who is way too close to home.

“It’s a bit of a groundbreaking show for Australia because it’s got a section of Aboriginal language in it,” says David Jowsey, co-MD and producer at Bunya Productions, the company behind the series. “It’s also set in a traditional community, in a traditional world, so we hear the language and see traditional culture. We haven’t really seen a lot of that. Most things are urban, so when you go out into these more traditional spaces, it creates a whole different world. The world of the series is really interesting.”

Produced by Bunya, it is backed by Screen Australia’s First Nations Department, Screen NSW, Screen Territory and distributor About Premium Content, which has already sold True Colours to US streamer Sundance Now. The series was co-developed with the Central Australian Aboriginal Media Association.

“It’s a crime drama set in the Aboriginal art world, which is just totally fascinating,” Jowsey continues. “We’ve got an Aboriginal female cop working in the mainstream going home to her community, where she hasn’t been for a long time. She’s a bit out of sorts with her family because they all operate under traditional law and have their own legal system, so she’s right in the middle of it, caught between two worlds.”

Bunya has built a reputation for telling Aboriginal stories set in the Australian outback, having produced series such as Mystery Road and films including Sweet Country. True Colours, Jowsey says, will take viewers into an unseen world as Toni is tasked with infiltrating a tight-knit community that doesn’t want to reveal the answers she is looking for.

“It’s like a western with a cop trying to solve a murder, so it’s very accessible for international audiences but this collision of law is just fascinating,” he says. “You don’t really know what’s going on. She has protocols where she can’t talk to certain people. It’s a really interesting world no one’s really seen before. Even in Australia, we haven’t really seen it. That’s what I mean by groundbreaking.”

When Toni is initially tasked with investigating the car crash, she is extremely reluctant to return home, owing to longstanding issues with her family. Once she does go back, she finds herself unsure whether her family are telling her the truth as she winds up involved in a murder inquiry.

“She is seen as an outsider. She’s given a lot of warnings by people, they don’t want her there,” Jowsey says. “She gets the feeling they’re lying to her. It’s a tricky line she’s walking because you can get into trouble if you push it too far and break protocols. There could be actual consequences, so there’s quite a lot of jeopardy for her taking on this role.”

Bringing True Colours to air has been a long journey working with Williams and writers and directors Glynn and Steven McGregor (Sweet Country), with Danielle MacLean (Mystery Road) also on writing duties.

“Warren always wanted to make a TV show and he had this idea, so he brought it to a TV organisation in Alice Springs, they brought it to us and we worked with Erica and Steve to put a team together,” Jowsey says. “We brought one of our heavy-hitting crime story producers, Michaeley O’Brien, who did the first season of Mystery Road, so we put an orthodox drama team together with this idea we could never access because we don’t know anything about it. A lot of it is sacred.”

The production team worked closely with Williams and the Amoonguna community near Mparntwe, where the series was filmed. The scripts were written both in English and Arrernte, with a third version written in phonetic Arrernte.

A lot of original artworks were hired for use in the series, while artists were also commissioned to produce hundreds of paintings.

Filming was complicated by both the pandemic and local wildlife. “There was a horse there who would roam freely and bite people if they didn’t feed him. That was scary,” Jowsey recalls. “Then there were a lot of brown snakes around one night when we were shooting, attacking the crew. One crew member had to jump on the bonnet of their truck. These snakes are six feet long. They’ll kill you if they bite you, and there just seemed to be a night when they all came out. It’s pretty crazy shooting in Australia.”

But filming on location amid breathtaking landscapes and working with members of the Indigenous community are all part of Bunya’s emphasis on authenticity. “We make sure our collaboration with the community is solid,” the producer explains. “It’s something we’ve done a lot of over the years. What people are looking for is genre, but with something you haven’t seen before, because there are so many crime shows. This is a unique perspective on it and I think people are going to like it.”

That ‘Trojan horse’ approach is one familiar to Bunya, with Jowsey describing it as the company’s modus operandi. “We like crime and westerns and working in the outback, so we use a genre to make something people can recognise. But inside that, we put a story about culture, history or identity, and that is a conversation with the Australian public and, more globally, with Indigenous issues. As long as you hit those genre buttons, audiences can relate and watch it anywhere.”