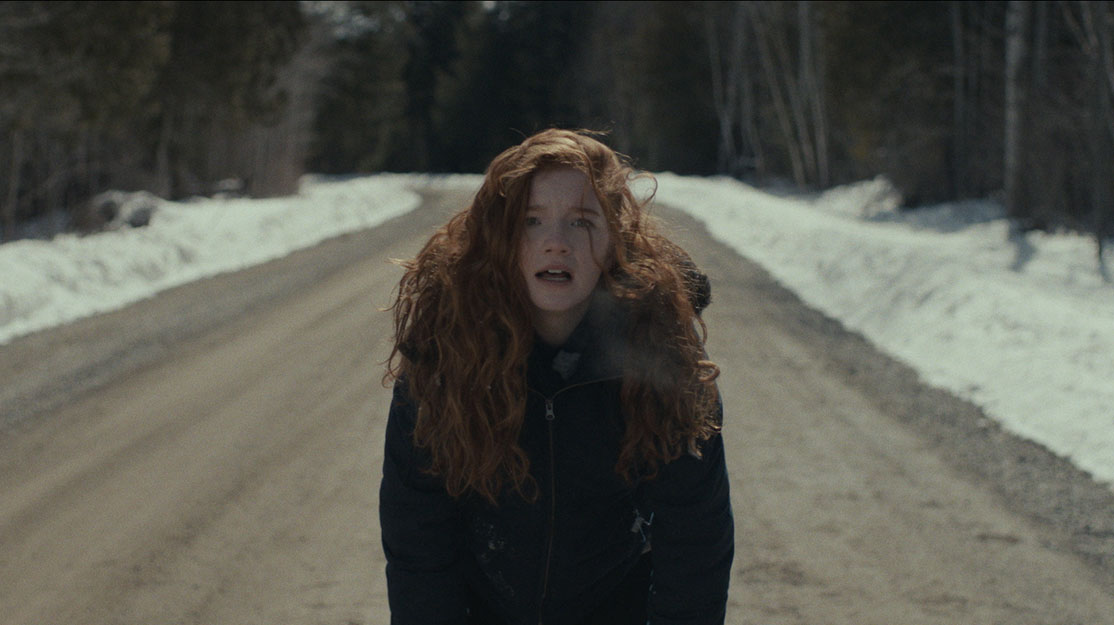 Out in the Cold

Writer/director Emily Diana Ruth tells DQ about her digital drama Cold, which is being screened as part of the Drama Series Days at the European Film Market.

A 16-year-old girl is at the centre of a tragic family mystery in Cold, a digital drama being screened at this year’s European Film Market in Berlin.

The 10×12’ thriller stars Annalise Basso (pictured top) as Isla Wallis, who discovers her real father is in prison for killing the mother she never knew. Furious at this revelation, she runs away to the mining town where she was born, only to learn of a series of horrific murders that may be linked to her mother’s death.

With the help of her friend Isla, she begins to uncover the truth behind these brutal crimes. But when she is left for dead in the sub-zero wilderness, she faces a battle to survive long enough to expose a dark secret that will shatter an entire town.

Produced by New Form Digital and distributed globally by Keshet International, the series made its debut in the US on Verizon’s Go90 platform in October 2016. Keshet is screening it this week as part of the European Film Market’s Drama Series Days 2017.

Here, creator Emily Diana Ruth tells DQ about the origins of the series, how Go90 picked it up and why the its setting was key to the story’s success.

How would you describe Cold and what’s the main story?
Cold is the story of Isla, an adopted teenager who seeks out a face-to-face meeting with her birth father when she discovers that he is still alive – and in prison serving a life sentence for the murder of her mother. When she makes it to the small northern town where she was meant to grow up, she begins to question the validity of that verdict and starts unravelling a mystery that remained buried for the last decade.

What were the origins of the project?
I was given the opportunity a couple of years ago to pitch a project for New Form Digital’s second Incubator series. It was supposed to be an idea that could exist as a standalone short film but the storyline could be extrapolated for a series as well. I’ve always loved mysteries and wanted to get a chance to try that but also to create something that worked as a coming-of-age story. We made the short on a modest budget in my hometown with a bunch of my friends and family. It was a great chance to explore character and a tone before making the series.

When did Verizon’s go90 become involved and how did the demands of the platform change the show’s development?
I found out Verizon had given the show a series order a couple of months after it was made live on YouTube. I was thrilled but naturally a bit terrified of what was to come, knowing that all projects like this have many obstacles and not knowing what exactly they would be, having not worked on a project of this size and budget before. Making this into a series that would be rolling out week by week was the biggest challenge about this platform – it was necessary to make every episode end on somewhat of a cliffhanger to keep people coming back the next week.

How did you juggle writing, producing and directing duties?
Luckily the only job I had to do entirely on my own was the directing – I had several writers I worked with, and although I have a producer credit, I also worked with three producers who had their own team so I never had to wear too many hats.

Where was the show filmed and how did you use locations to tell the story?
We filmed the show in Sudbury, Ontario, Canada. I knew the location would be key in providing context for what kind of place these characters lived in and how it formed their identity. I wanted to be as true to rural Ontario life as possible, so it was important for me to shoot there. We also shot all of our reserve scenes on an actual reserve in the greater Sudbury area. This was a location that I was hell-bent on showing as authentically as possible, so we were pleased they allowed us to use their land. We also used a lot of shots of the wide sprawling woods and frozen lakes in the area to give a sense of how middle-of-nowhere this town was.

Who are the key members of the cast and how did you collaborate with them to bring their characters to life?
I got to work with an exceptional cast and I am so thankful for that. Our lead, Annalise Basso, was talented and professional beyond her years and really came through to help bring her character to life, despite very fast-moving days. Getting to work with seasoned actors like Jim True-Frost and Todd Lowe was also so exciting and I learned so much from them. I admit I was intimidated to be directing them but they were both lovely and treated me so respectfully.
Marcus Johns and Kawannahere Devery Jacobs rounded out the rest of the key cast. Marcus was somewhat new to acting on this scale but was really fun to work with and nailed his performance. I was thrilled that I was able to work with Devery, since she was always who I pictured as her character, Tina. She’s such a badass character and getting to see Tina and Isla’s friendship blossom on screen was my favourite.
Because we were filming so remotely and could only bring actors up for a limited time, our rehearsals were very brief and mostly consisted of talking though the material and the characters, and seeing what things in our personal lives we could draw upon for certain scenes. I always like to be very collaborative with my cast and invite them to bring their own versions of the character into the mix.

What were the biggest challenges during production and how did you overcome them?
Easily the biggest challenge was lack of time, which is often the case on these kinds of projects. We had a set number of shoot days despite an ever-more complex script. This meant our days were very packed and we had to constantly move very fast. We overcame this, or tried to, by simplifying our setups, being as economical as possible with our shot list and keeping everyone in good spirits. My assistant director Jeremy Doiron helped immeasurably with this – despite having the hardest job, he was always in a positive mood and helped me and my director of photography to lead our teams to get things done well and in time.

What are you working on next? Could Cold have a sequel or perhaps transition into a longer-running series elsewhere?
I would love to get a chance for a sequel or to make Cold into a TV show or even a film. I think most directors are never totally satisfied with their work and will usually jump at a chance to give it another swing. I love the Cold world and know I could do so much more with it. Right now I’m working on lining up my next digital project as well as writing the screenplay of what I hope will be my first feature.