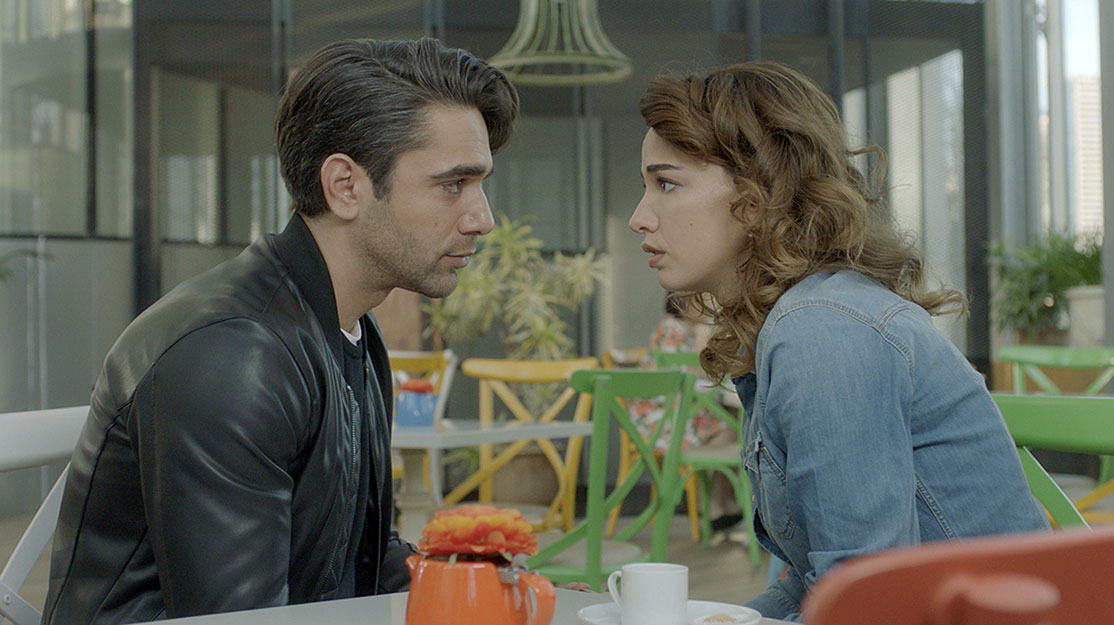 On the Wings of Love

Actors Seda Bakan and Kadir Doğulu introduce DQ to Turkish drama Bana Sevmeyi Anlat (Wings of Love), in which their characters come together in search of love and a better life.

As is typical of a telenovela, love is the central theme of Turkish drama Bana Sevmeyi Anlat (Wings of Love). And in another trademark of the genre, viewers can expect to be taken on a rollercoaster of emotions before finding out whether love will conquer all by the show’s end.

The series stars Seda Bakan as Leyla, a single mother who agrees to marry Haşmet as she goes in search of a better life. However, when she discovers on their wedding day that he is not who he seems, she decides to flee, fearful for her son’s future.

It is then that she meets Alper (played by Kadir Doğulu), one of Haşmet’s employees who unwittingly helps her escape. Struggling to bring up his daughter alone after a car accident left his wife in a coma and killed his brother, Alper has just started to get his life back on track. But when he hears of Haşmet’s behaviour, his only thought is to keep Leyla and son Rüzgar safe.

The couple soon fall in love and, despite their best efforts to keep apart, circumstances continue to bring them back together.

Here, Bakan and Doğulu tell DQ more about their characters, the challenges of filming long-running telenovelas and their experiences shooting in the Turkish capital, Istanbul.

Who are your characters and how do they fit into the story?
Seda Bakan: I play Leyla, who has a daughter. She got married at an early age and then returned to her family when things didn’t work out. Now she is living with her father, stepmother and her siblings. Meanwhile, her father has an associate [Haşmet] who appears to own a restaurant chain – but in truth he is a member of a drug cartel. Leyla agrees to marry this man but, right before their wedding, she finds out he is a murderer and she runs away from the wedding. At that point, she chances upon Alper who is the executive chef of Haşmet’s restaurant – a meeting that leads to an escape story full of love, action, tension and adventure.
Kadir Doğulu: It is a beautiful and a very sincere love story but, of course, it doesn’t start as a love story. I play Alper, who is both a chef and a businessman. He is married and has a daughter. He has a great relationship with his daughter and he believes he has a beautiful relationship with his wife as well. One day, his wife and brother have an unfortunate accident, after which his brother passes away, his wife is in a coma and his life changes drastically. He then realises that the people around him, including his wife, have not been trustworthy and this causes his motivation in life to change – until he meets Leyla. It is a supe- romantic story that is full of love and action.

How does Wings of Love stand apart from other Turkish dramas?
Bakan: The thing that distinguishes us from other series is the never-ending tension. Anything can happen at any time. The story is so tense that something might explode at any point. When it comes to raising expectations and diffusing the action, it’s one of the best scripts I have ever read. It sounds like we are praising ourselves, but it’s the truth!
Doğulu: Lately, Turkish dramas and romantic comedies have been dwelling on the rich girl/poor boy or rich boy/poor girl stories. That’s where we differentiate from the others. Wings of Love has nothing to do with money. There are real feelings, the kind you would have in your daily lives. That is what makes our show more attractive. We are highly realistic and sincere.

When you got the script for the first time, what was it about the show that made you want to appear in the series?
Doğulu: Having a daughter [in the series] and my relationship with her.
Bakan: I had starred in comedies before and I was looking for a strong drama when Wings of Love came. I accepted it right away because it had a really high tempo and I thought it would be a great drama to be a part of.

How do you get into character and do you draw on your own personal relationships or experiences?
Doğulu: It is not easy to get into that frame of mind. I have an acting coach and we get ready for each role together. We always dig deep to find the character’s feelings, obsessions and past. From there, I keep going by adding things from myself. Alper felt like he was written for me, so I didn’t have a hard time getting into character. I don’t know how the audience felt, but that’s the way I feel. I had strong motivations when playing Alper. One of them is him having a daughter, because I have always wanted a daughter myself. Moreover, I am freshly married and I live life to its fullest. I believe this reflects on the love Alper and Leyla share. Additionally, I used to be a chef and I had my own restaurant before I changed my career when I was 28. Alper is also a chef who is very knowledgeable when it comes to food. So I think it was one of the easiest roles for me to get into.
Bakan: I also work with someone to get a deeper understanding and a different point of view on the script. When I look at my character, I first distinguish her differences and what I shouldn’t use from myself, and I move on from there. Then I internalise the things the script, writer and director want from me. Finally, I observe how my co-stars act and create my character with their influences.
Doğulu: We built a past for the character with my acting coach. In addition to the character analysis we receive, we build an off-script past in order to get deeper into the character. Sometimes we go as far as designing the way he drinks coffee.

What are the challenges on set and in production?
Doğulu: It’s maybe not a challenge but, as a result of my role, this project made me want to become a father in my real life, especially as I get to know Lavinya [Ünlüer, who plays Alper’s daughter Çiçek] more. She fascinated me with her intelligence and I became more and more of a fan of her character.
Bakan: The kind of comedy shows in which I used to act are about 60 minutes long [per episode], but drama series are much longer, about 120 minutes. This was something I wanted to experience because as the time gets longer, it gets more challenging to stay in character.

What are the challenges of working on long-running Turkish dramas that can stretch for hundreds of episodes?
Doğulu: It really is a bit problematic – we need a fundamental change. But I learned to accept it instead of fighting it. Naturally, one wants to spend more time with his family and by himself as well. However, I accept this and carry my life to set, focus on my job and spend any minute that is left with my loved ones to motivate myself even more, instead of focusing on the negative aspects of the industry. It’s just the way it is in Turkey. Since I personally cannot change it, I exclude the negativity from my life and carry the positive aspects and wait hopefully for things to change to the better.

What are the positives of being part of these vast stories?
Bakan: It doesn’t really have a positive side, only a negative. It affects one’s body and brain!
Doğulu: I can take care of my family the way they want, keeping and raising their standards, thanks to this job. I learned how to manage my free time efficiently and happily. I learned that the psychological effects of the periods that I don’t work can’t be compared with the exhaustion of work. So it is a positive thing that I can satisfy the needs of my family and it is a positive thing that I learned how to best manage my free time.

What was filming in Istanbul like and what role does it play in the series?
Bakan: It’s a very crowded city!
Doğulu: For me, Istanbul is the most beautiful city on Earth. It makes you forget all the troubles there are thanks to its beauty. The city turned into a huge studio for us, and we avoided the crowds by shooting in relatively calmer places. We only got into traffic and crowds if we needed to. We filmed as if we were in the centre of Istanbul, but by using places that are not right in the centre. So we were not affected by the chaos of the city that much. However, there were times that we ended the day at 16.00 but arrived home at 21.00. This is part of Istanbul; it doesn’t really matter whether you work on a set or somewhere else. To look on the bright side, Istanbul is a city that draws attention. People, including me before coming to Istanbul, think Turkey is all about Istanbul because of its population. The city draws attention from Anatolia, the Middle East and Europe as well. It’s  visually amazing and has fascinating views – and we have the Bosphorus!