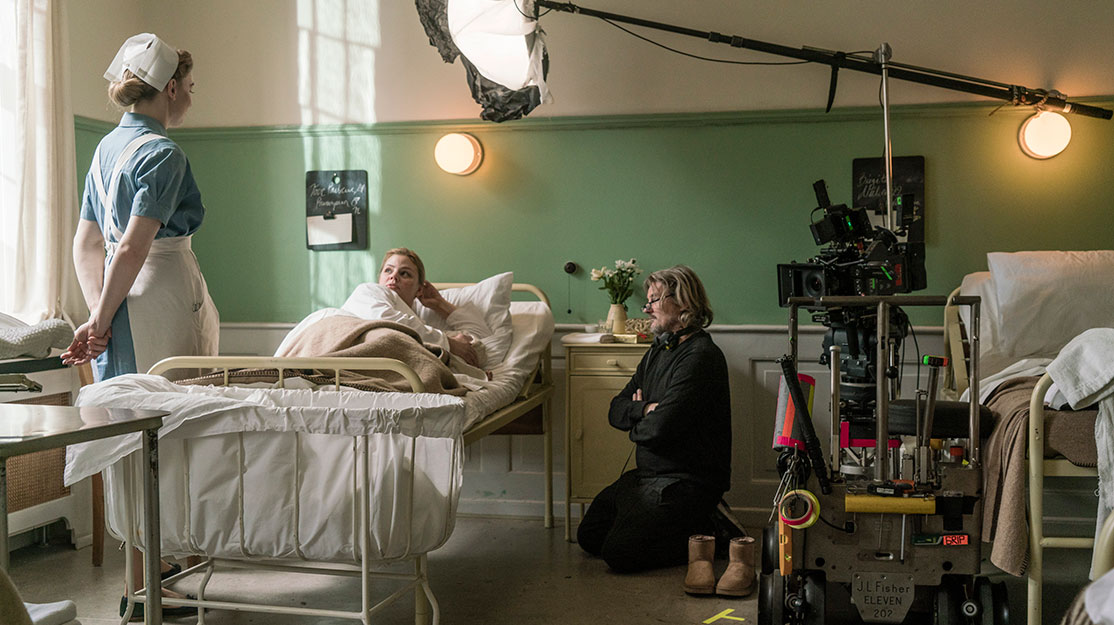 Danish drama Sygeplejeskolen (The New Nurses) revisits a period of history when men were trained to be nurses for the first time, following the Second World War. DQ speaks to SF Studios producer Senia Dremstrup about making the 1950s-set drama.

Danish broadcaster TV2 has found success looking to the past. In 2013 it launched Badehotellet, a drama series set in the 1920s that explores the lives of the guests and staff of a seaside hotel. The sixth season of the show aired this year.

In 2017, meanwhile, Mercur (Something’s Rockin’) debuted on sister channel TV2 Charlie, dramatising the real-life highs and lows of Radio Mercur, which became the first offshore commercial radio station in Europe when it launched from a ship in 1958 to bring rock ’n’ roll to young music fans.

Following in the tradition laid down by those series – one of light drama and touches of humour – is Sygeplejeskolen (The New Nurses), which returns to the 1950s to tell the little-known story of the first men to be trained as nurses in the wake of the Second World War.

Following the conflict, Denmark found itself with a shortage of nurses, leading to an experiment that saw men admitted to nursing school for the first time in history.

The series follows Erik (Morten Hee Andersen) and Anna (Molly Egelind), who both enrol in the school for very different reasons. Erik comes from the military and dreams of making a difference after his experiences during the war, while Anna comes from a wealthy family and wants to prove she is more than her status.

The drama hails from writers Claudia Boderke and Lars Mering, who partnered with SF Studios and producer Senia Dremstrup with the aim of developing another 1950s-set drama for the channel. Their research saw them discover the true story that underpins the series, with the admission of male nursing students to Rigshospitalet’s nursing school in 1951.

“I’d never heard that and thought it was such a great story, especially in these times when there’s all this focus on gender. So we took it from there,” Dremstrup tells DQ. “Pretty soon, we realised taking in six men who were too perfect would mess with the story – we needed some drama. So we invented this character, Erik, as someone who has a background in the military and wants to get out of that.

“Of course, he doesn’t believe in authority or norms, so there are a lot of problems with him and he almost gets kicked out of the school many times. It’s been fun to look into the 50s because there were a lot of things they did differently. They didn’t actually talk with the patients, who had no idea what was going on. It’s so strange, and those contrasts with today have been fun to dive into.”

Once the greenlight was given and the first six parts were written, director Roni Ezra (Below The Surface) was brought on board. Episodes mix patients-of-the-week medical cases, where the students can practice their new skills, with longer character arcs that develop the relationships, often romantically, between the trainee nurses.

Episodes were filmed out of sequence, meaning the actors were often jumping between scripts to suit locations or scheduling. Dremstrup describes the series as “quite low-budget,” creating a significant challenge in finding the right place to film it. The production team subsequently discovered a disused hospital on the outskirts of Denmark’s capital, Copenhagen, where they were able to dress the rooms for the period.

“We made a rule that every scene had to take place at this hospital, so we can never leave,” Dremstrup says. “At that time, the nurses lived at the hospital and had small dorm rooms so we built those as well so we could have the hospital location and the bedrooms. Sometimes we would go out for a picnic or to meet a tram, but mostly it was all set at the hospital.”

Beyond the setting, authenticity in the medical conditions afflicting the patients and the way the nurses treat them was key. Though the nursing experiment took place in 1951, the series was set 12 months later to utilise a real-life polio epidemic that struck in 1952. At that time, the Korean War was also underway and Denmark participated by sending a hospital ship to Korea. Both storylines were then able to be included in the series.

“It’s fun because some of my friends in the television business have been very surprised that the show is so light and bright because they’re used to Danish drama being heavy and dark and rainy,” Dremstrup says. “This show is sunshine nearly all the time, partly because when we were filming season one, we had the best summer ever. It started the day we began shooting and it just went on for ages. But it’s summer, it’s light. There is drama and conflict but it’s a feel-good show.

“Our heroes are not real nurses yet in the first season. You have to be on trial for four months before you are accepted as a real nurse. This means they have these young people going into this hospital and they don’t know anything. They can’t operate. They can take temperature and measure blood pressure but, really, they have no medical skills. Lars and Claudia did a very nice job by finding ways they could be faced with different illnesses.”

Dremstrup says the team researched lots of other medical dramas during development, but adds that The New Nurses operates at a different pace to its genre stablemates, particularly those known for chaotic waiting rooms and graphic depictions of surgery in sterile operating theatres.

In contrast, “this is so fresh,” she continues. “In Denmark we have a very famous medical drama called Riget [The Kingdom] by Lars Van Trier. I know TV2 has tried to make a medical drama for many years because the hospital is a very good arena for storytelling. You can always put in a new patient to the story or something. But we’ve been the first to crack it. And on top of that, it’s set in the 50s.”

TV2 went on to commission season two after seeing just a rough cut of the first batch of episodes. With an airdate set less than five months after the first season’s conclusion, the producers had a quick turnaround to get back into production. Both seasons are distributed by REinvent Studios.

“They really wanted us to do another season and very fast,” Dremstrup recalls. “We would have loved to have had more time, of course, but it was nice to do it so soon and it was nice to know this was actually going to be aired.

“When you’re developing something, people have to look at what you’re writing and maybe they like it or maybe not. But we knew we were going to air and we had a lot of things in place like the hospital, the costumes and our great crew. For the scriptwriters, the process was a little bit stressful. But I have to say, I don’t think the viewers will see that we did it so fast. I really believe it has the same quality and I know the stories are very good.”

The only problem with jumping straight back into production was the fact that shooting the second season took place over winter, with filming beginning in November and ending in February.

“Luckily for us, it wasn’t a snowy winter, though we had to work with the light, as the sun goes down at 16.00,” Dremstrup notes. “It meant we could have real nights because, when you shoot in summertime, you still have bright light very late. But we tried to keep it warm and cosy. When they go outside, they’re in short sleeves so you don’t see it’s cold, but it is because there are no leaves on the trees.”

The producer, whose other credits include Norskov and Advokaten (The Lawyer), says she enjoys the show’s mixture of episodic and serialised storylines, which mean viewers get a satisfying conclusion with each instalment but also tune into the next episode to see what lies in store for the characters.

“People don’t watch television like they used to. You need the long season arc,” she says. “We have two patients in each episode. They can vary, and we don’t stick to that rule, and then we see how much we can get from the other characters. Some of the characters who were in the background in season one, suddenly you can lift them up in season two and ask ‘Why is she like that?’”

Earlier this year, writers Boderke and Mering were nominated for the Nordisk Film & TV Fond Prize, which recognises outstanding writing of a Nordic drama series at the Göteborg Film Festival’s TV Vision event. The New Nurses has subsequently been proclaimed as TV2 Charlie’s most popular series ever, leading it to be recommissioned for third and fourth seasons. Work in the writers room is already underway, with production scheduled to begin in 2020.

Meanwhile, Dremstrup is developing a crime noir thriller called The Oxen, based on the book trilogy by Jens Henrik Jensen. Consisting of Hangdogs, The Dark Men and The Frozen Flames, the novels feature war veteran and elite soldier Niels Oxen, brought back from retirement to investigate a series of mysterious murders, with sidekick agent Margrethe Franck in tow.

The trilogy will be turned into two seasons of eight episodes, penned by writing couple Mai Brostrøm and Peter Thorsboe (Modus, The Team, The Eagle) and distributed by REinvent Studios.