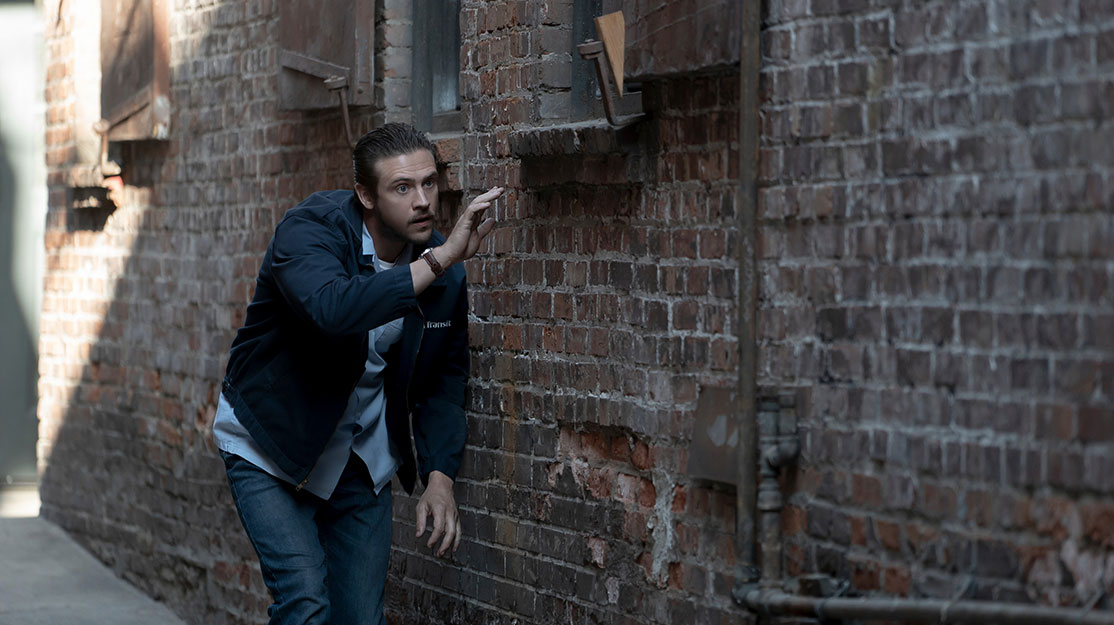 While the coronavirus pandemic has put a dent in the ambitions of shortform streamer Quibi, the company’s partnership with writer Nick Santora has certainly ensured early subscribers can enjoy plenty of pulsating action scenes and thrilling chases.

Santora is the creator and writer of Most Dangerous Game, Quibi’s standout scripted drama upon the platform’s launch in April, in which Liam Hemsworth’s character is offered the chance to win millions of dollars if he can evade a gang of hunters for 24 hours. Inspired by Richard Connell’s 1924 short story, the thriller was last month nominated for an Emmy for outstanding shortform comedy or drama series.

Santora is also responsible for Quibi’s latest action-adventure series, The Fugitive, which began its roll-out of daily episodes yesterday. Chapters of the 14-part series will launch every weekday until August 18.

Taking its lead from the 1993 film starring Harrison Ford, The Fugitive sees an innocent man on the run from the law, with Boyd Holdbrook’s ex-con Mike Ferro suspected of a bombing attack on the LA Metro. As the net closes in, Mike must find a way to clear his name while evading the efforts of Detective Clay Bryce (Kiefer Sutherland) to apprehend him.

Santora had finished writing Most Dangerous Game when Quibi co-founder Jeffrey Katzenberg asked him to look at a script written by Albert Torres, in which an innocent man was accused of blowing up San Francisco’s BART (Bay Area Rapid Transit) system. “Jeffrey felt Albert’s script leaned a lot into politics and how politicians were trying to take advantage of the tragedy. He didn’t think that type of story would work well on Quibi, so he asked me if I would be willing to take the concept of the subway attack and the wrong man being accused and see if I could morph that into The Fugitive,” Santora tells DQ. “So that’s what I did.”

Santora’s television career has seen him write on shows including iconic crime drama Law & Order, Prison Break, Breakout Kings, Vegas and action drama Scorpion, which he created. He says the biggest difference between working for Quibi and working for traditional networks is the amount of freedom he is afforded to tell his story.

“It’s 100% less painful,” he says. “Jeffrey Katzenberg, for whatever reason, digs the way I write and he’ll read stuff and greenlight it off of first drafts. When I say I get little to no notes, I mean a four-and-a-half minute conversation where it’s like, ‘Hey, we liked that one character. See if you can build her up a bit.’ I’ll say, ‘OK,’ and that’ll be it and we’re filming a few months later. Working with Quibi is fantastic. You go from ‘OK, start writing’ to ‘OK, start filming’ to ‘OK, you’re done’ in seven or eight months. If you like to get your stuff made, it’s a great place to work.”

The streamer is more hands-on when it comes to the casting process and finding locations, Santora notes, though the creative freedom is what makes it a special place to work. “You really get to make what you want to make,” he adds. “Quibi definitely has thoughts and opinions on things, but I haven’t come across a dictatorial attitude at all. That’s one of the best things as a writer. And I find writing for Quibi really hones your skills and forces you to be very disciplined. When you only have seven to 10 minutes to tell a story, you can’t waste any time.”

While the total running time of The Fugitive clocks in at just over two hours, Santora says he treats each chapter as he would an hour-long episode of broadcast television, with story and character arcs contained in each bitesized helping.

Santora breaks down the story visually, with cards on his office wall representing each scene that will hopefully answer the one question that is constantly running through his mind: what happens next? With several explosive set pieces in place throughout the series, he fills in the gaps by making sure each episode is the right length while also ensuring they all conclude with a nail-biting cliffhanger.

He used the same process for Most Dangerous Game, but what he learned from writing that first Quibi series was the importance of each episode having its own story. “A viewer of one of my Quibi series needs to be able to look at it and say, ‘Oh, that’s the episode where…’ or, ‘That’s the episode when…’ If they have to use three or four sentences to describe the episode, I have failed,” Santora says. “It needs to have its own event, its own theme and its own arc, so you can say that’s the one where he learned his father had gone missing, that’s the one where he hijacks a subway car or the one where he jumps off a moving boat.”

Filming on The Fugitive took place in LA at the same time Most Dangerous Game was in production in Toronto. Santora doesn’t spend a lot of time on the set of his shows but, as an executive producer, he watched the dailies from both shows while also overseeing their post-production simultaneously.

Like the shows themselves, “it’s just exciting,” the writer says of working on two series at once. “We set up both shows in the same post house and there was one hallway five-and-a-half feet wide where on one side was The Fugitive and on the other side was Most Dangerous Game. I would run back and forth between each one. I was in a visual effects meeting for one and an editing meeting for another, then a sound meeting for one. That was fun because I could have both my teams in the same building.

“I’m not a big on-set guy. I prep in a very detailed way with my directors and department heads and make sure we’re all on the same page. We go over everything from wardrobe to locations and everything in between. But then I’m not involved on set. I’ll show up every once in a while, but the truth is I’m not needed there. I’m working on the dailies and making all my notes and making sure we get everything we need. I’m not going to sit there and tell a director how to direct. That’s not my job.”

The Fugitive was unaffected by the ongoing coronavirus pandemic, and Santora says he isn’t planning to write new material set in a world where masks and social distancing are commonplace. “There are some writers who are writing Covid storylines in their TV series. The stuff I’m writing will not take place in that world and, frankly, that’s just because I had written almost all of it before Covid started,” he says. “There’s no point going back and doing a rewrite just where people have masks on. My hope and everyone’s hope is sometime in the near future we have treatments, vaccines and things of that nature that make all of this an awful memory.”

Quibi’s pitch as a commuter-friendly streaming service that offers bitesized chunks of television to be enjoyed on train or bus journeys to work may have fallen flat while the majority of people continue to work from home, but the short running time of each ‘chapter’ only heightens the demand to continue watching series like Most Dangerous Game and The Fugitive that end every episode on a knife-edge.

tagged in: Most Dangerous Game, Nick Santora, Quibi, The Fugitive