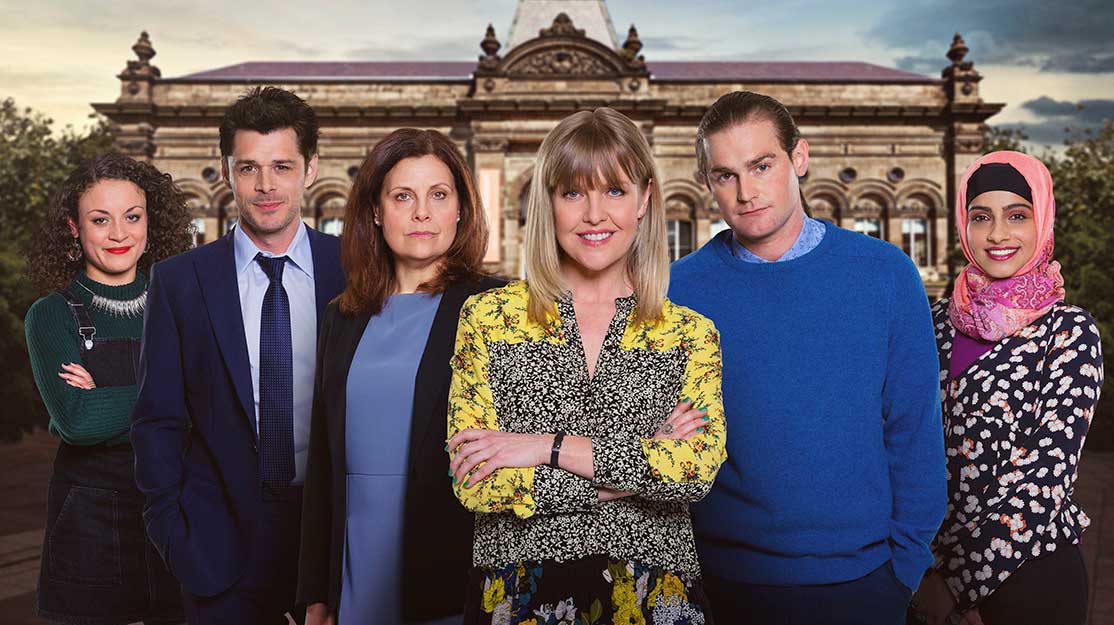 Kay Mellor puts her characters – and the audience – through the emotional wringer in BBC1 drama Love, Lies & Records, which stars Ashley Jensen as a working mother juggling her family life with the daily dramas inside a registry office.

The foyer of Dewsbury Town Hall is awash with crew members, its floor covered in cables and wires running between lighting rigs, cameras and monitors.

Banners promoting weddings, naming ceremonies, proms and parties are stationed in various enclaves or next to the large marble columns dotted through the room. A visitors desk is positioned beside the main doorway, a security guard sitting behind it.

Grand pictures of former mayors are hung across the walls of the elaborate Victorian building, which is filled with wood-panelled rooms, ornate painted ceilings and stained-glass windows.

When the cameras begin rolling, however, the setting becomes Greater Leeds Registry Office. Director Cilla Ware, helming the second block of filming, watches behind a monitor as Ashley Jensen, wearing a black leather jacket and black dress, and a suited Kenny Doughty walk across the room in conversation. Extras are waved forward into the shot, criss-crossing past each other as they walk in and out of doorways and stairwells.

This is the set of BBC1’s emotional and heart-warming Love, Lies & Records, in which Jensen (Extras, Agatha Raisin) plays registrar Kate, a working mother who must juggle her personal life with the daily dramas of births, marriages and deaths and the impact they have on her. Doughty plays fellow registrar Rick, with additional cast members including Mark Stanley, Adrian Bower and Mandip Gill.

Written by Bafta-winning scribe Kay Mellor (In The Club, The Syndicate), Love, Lies & Records is directed by Ware and Dominic Leclerc and produced by Rollem Productions in coproduction with Acorn Media Enterprises in the US. All3Media is handling international distribution of the show, which launches on November 16.

The idea for the six-part series first sparked inside Mellor when she had to go to Leeds Town Hall to register the death of her mother, only to return to the same venue for a friend’s wedding just five days later.

“We were in the same place with the same registrars and it made me think about their lives and about everything that went on in this town hall,” she reveals, describing the building as “a hub of emotion.”

Mellor continues: “Who are these people who are one minute marrying people and the next they’re registering a death? How do they cope with that emotionally? Do they have home lives, and how does that impact on their home lives?

“Kate’s looking after her daughter, who you see picking up strange things on her phone, while her son’s asking to get new trainers, and the next minute she’s registering a death and she’s got a woman in front of her who’s in floods of tears. How do you deal with that? It’s tough, it’s hard to do that. But every registrar I spoke to – and believe me, I spoke to a lot – people find their jobs absolutely fascinating and rewarding emotionally.”

The range of stories Mellor discovered from her research means 98% of the series is based on real events, she says. A wedding that takes place inside a hospice in episode one is just one example of a plot point based on a true story, while the show also touches on topical issues such as immigration, trafficking, cyber-bullying and poverty.

Throw Kate, a maverick who cares little for rules and procedure if it means finding a happy ending, into the mix and you have the potential for more drama than you can shake a particularly sharp stick at.

Unusually for a series written by Mellor, Love, Lies & Records is less of an ensemble drama, despite the large supporting cast, instead focusing mainly on central character Kate, who in the opening scenes discovers she has beaten office nemesis Judy (Rebecca Front) to a promotion. As such, Jensen is barely off screen, whether in scenes set at home surrounded by her family or within the walls of the town hall. Having previously seen Jensen audition for pregnancy drama In The Club – a role she didn’t ultimately land – Mellor was impressed enough to put Jensen at the top of her list for Love, Lies & Records.

“She’s clearly a leading lady and I’d gone out to her for In The Club to be part of an ensemble,” Mellor says of the Scottish actor. “But I think because of where she’s been, on the other side of the pond [in Ugly Betty] and she’s done Agatha Raisin, she’s a true leading lady in lots of ways. She’s never grand, she’s all embracing and lovely. She’s got a hell of a lot of lines to learn because she leads every scene.”

Inspired by female-led series including Madam Secretary, Doctor Foster and Danish dramedy Rita, Mellor adds: “I thought, ‘Wouldn’t it be lovely just to follow this woman on her journey and let it open out?’ You see some of her staff, her home life and how that affects her. I just love it when it’s multi-layered and then getting glimpses of the other lives of the other registrars and her family.”

Jensen admits she has long been a fan of Mellor’s work, which she describes as “television people want to watch.”

“With Kay’s writing, it’s so human but it’s done with humour. It’s so honest and a bit painful at times and funny and just very real,” Jensen says. “Her writing is just so wonderful to play. She does make it easy to learn and I’ve had a fair amount to learn. So far, so good.”

The actor also says she’s “ready” to lead a primetime drama. “Because I started at the bottom, I was the day-player that came in for a day, so I’ve done all that and I feel as if I’ve very much served an apprenticeship and it’s not like I’ve suddenly come in [to be a leading actor]. I think I know how to conduct myself and I very much feel that ,on set, it should be a collaborative thing. It’s a worry if it’s not, because every job is absolutely vital. We’re literally all working together for an end gain and I just happen to be the person in all day every day, but that’s fine. I feel ready for it.”

Another actor arguably more recognisable for appearing in comedies than dramas is Front, best known for comedic turns in shows such as The Thick of It but more recently playing it straight in Humans, Doctor Thorne and War & Peace.

“I could see it in her,” says Mellor of casting Front as the officious and fastidious Judy. “She’s a comedian but I’ve seen her play [dramatic] parts where I thought it would be lovely if I could just get a bit more of that.

“Judy’s been working as a registrar for a long time and has been passed over [for promotion] twice. She’s turning a little bit bitter. All that was gorgeous to write, but down the line they do go on an interesting journey. They’ll never be best buddies [Judy and Kate] but they end up in a better place than they were in.”

Front says she loves straddling comedy and drama, and is particularly attracted to roles that mark a departure from her previous work. “What drew me to [Judy] is just she’s a really complicated woman and is someone who’s made her life unnecessarily complicated,” the actor explains. “That’s what I’m imagining for her backstory – that everything she leans on to make her life easier is somehow actually making her life more complicated. She’s not a bad person at all; she does some really horrible things but she’s not a terrible person and I just think she’s one of those people who ties themselves up in knots and makes wrong decisions.”

Love, Lies & Records hits the screens during a prolific streak for Mellor that began earlier this autumn with BBC3’s online drama Overshadowed, which she executive produced. Then airing in the New Year is Girlfriends, an ITV drama starring Phyllis Logan, Miranda Richardson and Zoë Wanamaker, which Mellor has written and directed. Meanwhile, she has also written and directed Fat Friends: The Musical, which is based on her long-running drama about a group of friends trying to lose weight.

“Kay’s writing has a connection with everybody,” says Doughty of Mellor’s ability to create dramas that stir the emotions. “She’s got the ability to really connect with people on a human level.

“The writing is funny, heartwarming and heartbreaking, and you do get all of that. But this is a different Kay – it’s not The Syndicate or In the Club. It’s got a different grittiness. It feels different. It’s Kay but a slight departure for Kay, and that’s what really excites me.”