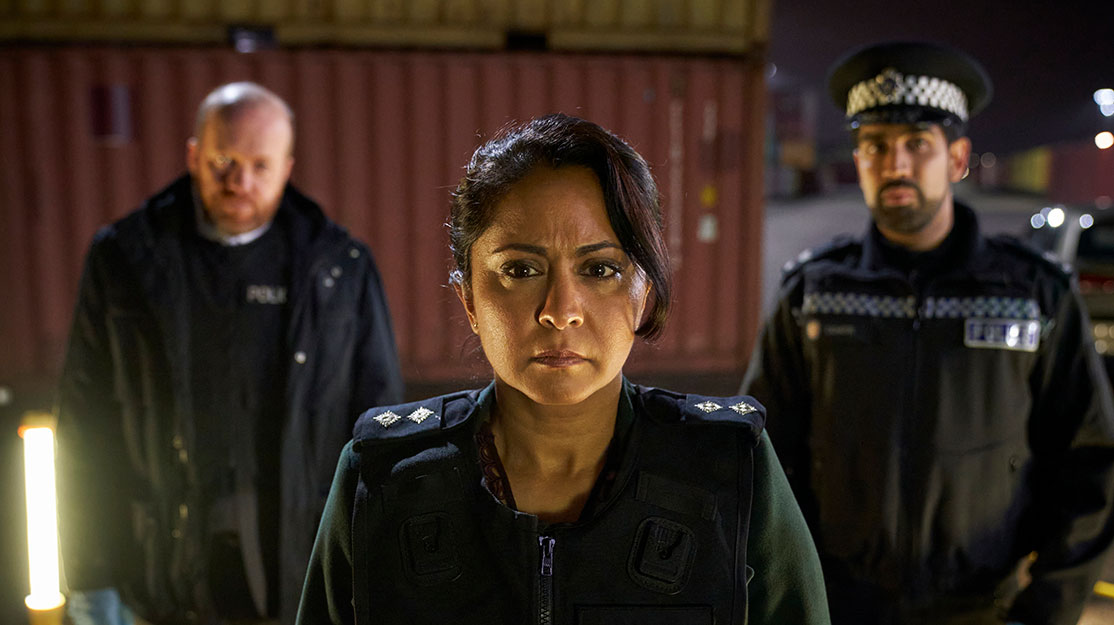 On the Ray up

Maya Sondhi has gone from starring in police dramas to writing her own. She gives DQ the lowdown on her first original series, ITV’s DI Ray, which focuses on a detective struggling with her identity.

Until a decade ago, Maya Sondhi had never considered herself a writer. Best known as an actor, she has built up a string of on-screen credits in shows such as Citizen Khan, The Split, Midsomer Murders and, most notably, as fan favourite Maneet Bindra in Jed Mercurio’s police drama Line of Duty.

But buoyed by her mother’s encouragement, her interest in observing other people – “I’d be a brilliant spy,” she says – and overcoming a lack of confidence, Sondhi eventually sat down to write her first script.

“You can’t really say ‘I’m a writer’ and have nothing to show for it, so you do have to put a lot of your own time [into it] and work for free while you’re creating your spec scripts,” Sondhi tells DQ. “And then I just learnt amazing things from writers rooms, from various schemes and from working on other people’s shows like EastEnders, Mount Pleasant and Ackley Bridge.

“Not only are you more in charge of your career, you get to put all the bonkers parts of your life into the stories, whereas when you were waiting for acting parts, it’s somebody else’s story. It just gave me loads of freedom, basically. And practically, you can write anywhere.”

Her path into writing has now led to Mondhi’s first original series, ITV crime drama DI Ray. The show is a deeply personal story relating to the title character’s British identity and South Asian heritage, asking what it feels like to be British but still seen as ‘other.’

Parminder Nagra stars as DI Rachita Ray, who achieves the promotion she has been waiting for when she’s asked to join a homicide investigation. However, on her first day, Ray is told the murder to which she’s been assigned is a ‘Culturally Specific Homicide,’ leading her to believe she is merely a token appointment, owing more to her ethnicity than her ability. Ray then determines to uncover the killer while calling out the obvious biases her colleagues bring to the investigation and dealing with the identity crisis she has been burying her whole life.

Sondhi wrote all four episodes, with support from a script editor, an associate producer and other executives, which notably include Mercurio, whose HTM Television label produces the series. They would hold Zoom meetings together to discuss certain storylines or elements of the show that weren’t quite working, before Sondhi would return to the script.

“To have Jed across it is a bit of a dream and a nightmare because he’s very specific and very detailed,” she says. “You have to get all the police stuff right, and obviously I wanted to, but if something’s not believable, he’s not having any of it. That’s really brilliant for me, that level of accuracy. It was a supportive environment, but ultimately it was me banging my head against a laptop and crying over it sometimes.”

Sondhi and Mercurio previously developed another project together that didn’t end up being commissioned. But when he asked what else she wanted to write, Sondhi suggested exploring her interest in identity, which is often integral to the characters she creates.

“Usually when I write characters, they’ve got some kind of identity issue going on,” she says. When looking into how to tell that kind of story, the pair naturally struck on the idea of creating a police thriller that could hook people in and “also address those issues without bashing anyone over the head with it,” she continues. “I don’t want it to be worthy and I didn’t want to be all kind of like, ‘Oh, let’s talk about race.’”

Despite having worked on crime dramas as an actor, Sondhi admits she was out of her comfort zone when it came to writing a police procedural. “I never thought I would do a thriller either, really, because I’m not very good at plotting,” she adds, “so it was a whole learning experience for me.” The writer was also supported by two “official” police advisors and a family friend who works as a detective with London’s Metropolitan Police.

“Getting their knowledge and really listening to them helped because then you can be authentic, can’t you? You can play with the characters if you can be authentic with the world,” Sondhi says. “Some people might not connect to the identity side of it at all, but that’s fine. Hopefully they will just enjoy it as a thriller. Then for the people who do connect to it, hopefully it will make them think, ‘God, I’ve felt that too,’ or, ‘Gosh, I’ve done that to somebody.'”

The first 10 minutes of the series reveal Ray’s experiences with everyday racism, from being mistaken for a shop worker to being given another Asian police officer’s lanyard. These and other incidents in the show are based on things Sondhi has experienced herself or heard about from others. More recently, she was mistakenly identified as the daughter of an Indian couple who happened to be standing in front of her in a security queue at Gatwick Airport.

“She’s also a woman who’s come in to lead mostly men who have been in that place for longer than she has,” Sondhi says of her main character. “I wanted that to be a thing where [Ray’s colleagues] Clive and Kwesi are a little bit like, ‘Who is this woman who’s come in to deal with us?’ Whatever your identity, being a woman, being a gay man, being a person of colour or being a person with a disability, there’s always something. But even if you’re none of those things, I’m sure everyone struggles with who they are and where they fit at some point in their life. We’re always trying to work out where we fit in the grand scheme of things, aren’t we?”

Through the series, it’s not just the central murder investigation Rachita has to confront but also her battle with her own identity, which is contrasted with supporting character Tony [Maanuv Thiara], who is at ease moving between two cultures or speaking English, Punjabi, Hindi or Urdu.

“He’s completely proud of being British and Indian, and she gets a glimpse of, ‘What went wrong? I could be that.’ Ironically, being forced to deal with an Asian crime actually makes her go, ‘Who am I?’ and it forces her to be a better police officer,” Sondhi says. “But we do take it very far away from domestic crime and into all sorts of bigger organised crime. I wanted that because Rachita wanted a promotion so that she could do the ‘sexy’ stuff. Then when she ends up doing the sexy stuff, she’s like, ‘Oh my god, this is enormous. There’s so much work to be done.’”

Issues of identity went beyond the storyline and into casting. Representation was important for the writer, who hails from Birmingham and is now based in London – two extremely diverse cities. “Yet we see such a tiny microcosm of them,” she says. “I’m really proud this show looks different. For a start, it’s got Parminder, which makes it different. Then I hope you will see a lot of people where you go, ‘Wow, we need to see more of them.’”

Speaking to Nagra about playing Ray, “she just got it,” Sondhi says. The British actor made her name in Gurinder Chadha’s 2002 comedy Bend It Like Beckham before becoming a household name in the US thanks to roles in shows such as ER and The Blacklist. The writer’s own version of Ray was chaotic and “a bit more all over the place,” but Nagra brings a “stillness, grace and elegance” to the character.

“She’s more like a swan. It’s all going on underneath, but she doesn’t show it on the surface,” Sondhi says. “Parminder’s just such a powerhouse and I wish we had seen more of her over the past 20 years, since Bend It, but she went to LA. I’m so chuffed it was her and I now I can’t imagine it not being her.”

Nagra didn’t have an easy time making the show, however, as the star appears in almost every scene and was on set every day of the 10-week shoot. “I didn’t make it easy for her,” jokes Sondhi. “She did so many night shifts and there were a lot of people coming in and out and she welcomed everybody, got on with everybody and set a really good standard of work and practice.

“The other thing about Ray is I wanted her to be funny too, and Parminder has that in spades. She brought that to her. It’s fine to be intense and bleak, and you can go to dark places, but you have to keep your sense of humour about it. Otherwise it’s just grim to watch, isn’t it? I don’t want to watch that. I don’t think anyone does.”

When writing the series, Sondhi was able to employ lessons she learned working on other shows such as EastEnders, and particularly the importance of a solid scene breakdown. She would sit at her laptop and work out the purpose of each scene, noting down any dialogue she wanted to include, so that when it came to writing the scripts, she already had a blueprint in place.

“When I used to try and write without that, because I used to want to rush straight into writing scenes and dialogue, the people I was working with in development were like, ‘No, let’s calm down, slow down, let’s do that bit.’ Now this is the bit I spend ages on because then you tease yourself,” she says. “It’s like tantric screenwriting. You tease yourself so much that when you come to writing the scenes, it’s pure joy. You’ve done the hard work.”

As with any series, however, the challenges came in writing hooks and cliffhangers that keep viewers coming back for the next episode – or as in ITV’s case, after the ad break.

“That was the thing that made me nervous constantly,” she says. “It didn’t come naturally to me at all. I had to work for that. And although doing EastEnders does help with that because each scene in EastEnders is like a mini cliff, you do have to get into the rhythm of writing like that.

“The other battle with any project like this is time management. You have to be realistic about what you can achieve in what time and when, with other things going on in your life. If I had no other things going on and I could just sit and write a script, that would be pure luxury, but I’d probably be awful because I would procrastinate too much and then spend too much time editing myself.”

Though she can’t yet disclose any of the numerous writing projects she is working on, Sondhi is clear that she wants her writing career to reflect the diversity of acting roles she has taken on.

“I don’t want to get stuck doing one thing, which is also why I didn’t want to just become a soap writer or I didn’t want to become a regular in a show as an actress, because I just want to mix it up,” she says. “For anybody who wants to write and is scared, I would just say everybody has a story to tell and your story is as valid as anybody else’s. Just write it and see what happens. Don’t think you can’t, because that’s what I thought for years and then look what happened. Basically, just do it.”