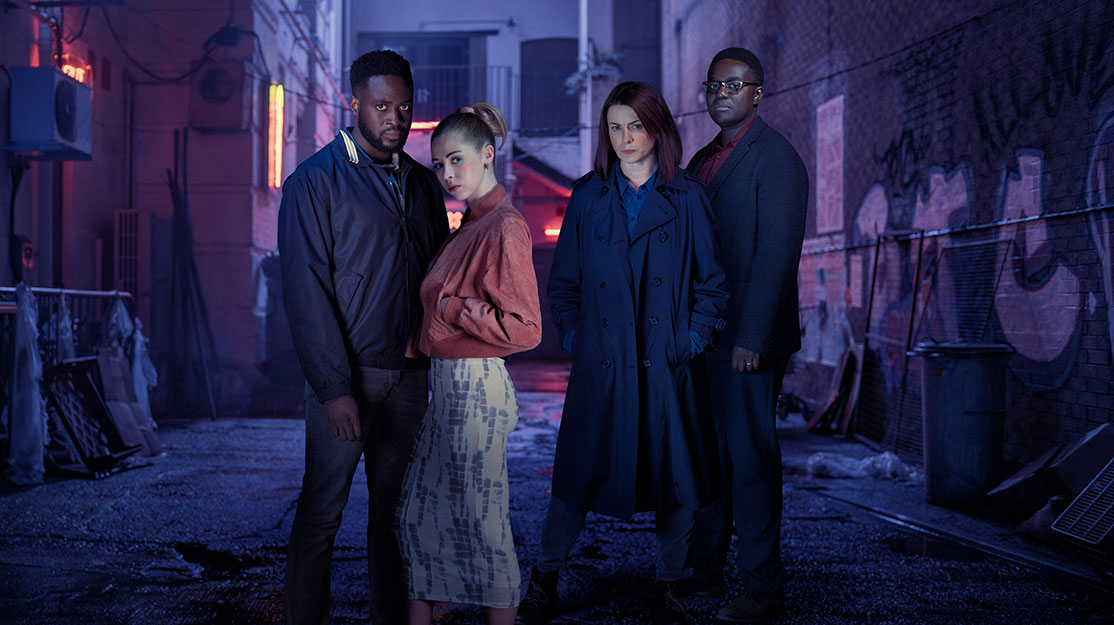 Cheat writer Gaby Hull talks about the inspiration and writing process behind six-part drama We Hunt Together, an unconventional police thriller in which two couples begin a cat-and-mouse chase.

In his first original series, Cheat, writer Gaby Hull explored a complex psychological relationship between a university professor and her student that turns toxic.

Now, in six-parter We Hunt Together, he puts a psychological twist on two sets of relationships to elevate the show from being a traditional police thriller.

Commissioned by UKTV for its Alibi channel, We Hunt Together introduces two couples who embark on a cat-and-mouse adventure in a story of sexual attraction and emotional manipulation. On one side is Freddy (Hermione Corfield), a highly intelligent, charming woman – and possible psychopath – whose chance meeting with Baba (Dipo Ola), a compassionate yet damaged former child soldier, leads them to form a decidedly deadly duo.

Hull was reading Truman Capote’s non-fiction novel In Cold Blood, which details the 1959 murder of four members of the same family, when the idea for We Hunt Together started to emerge.

“It starts with a terrible killing and then it flashes back and tells the story of these two killers and how they came to this moment,” he says of Capote’s book. “You spend a lot of time in their company; it treats them very objectively and invites you to identify with them on some level, and I found that very interesting. This cat-and-mouse thriller started to form in my mind, where we spend an equal amount of time with the killers and with the cops, thereby hopefully inviting a slightly different experience for the audience.

Hull, who has also written on ITV comedy Benidorm, admits blending genres was a “tricky” process, with the series combining elements of “twisted love story, a buddy-cop movie and a cat-and-mouse thriller.” But by pushing the relationships to the forefront of the story, he hopes viewers will become fully invested in the outcome of the police investigation.

“Hopefully the audience is rooting at some point for each character, even though, at the same time, you may be repulsed by some of the things they’re doing and you may find them dark and dangerous,” he says. “You are also hopefully finding they are a surrogate for your own experience and, on some level, empathising with them despite the terrible things they’re doing.”

A running theme from the outset of the series is whether humans can be truly accountable for their actions, a point of contention that immediately puts a wedge between Lola and Jackson. Hull says he has used extreme examples to test that question, asking whether, by spending time in the company of people who commit horrendous crimes, we understand them more and may even empathise with them.

“I’ve always been very interested in free will and how accountable we are for our own actions; the myth that we are in control of our own lives when, in fact, usually it’s lots of factors beyond our control that shape our behaviour,” he says.

“Jackson very much believes that. He’s tired of a police force that seems to disproportionately punish young black men who look like him. He can see the system is set up to punish individuals for systemic failures, and that’s led him on this interesting journey where he no longer really believes in crime or criminals.

“Lola is very much more old school and represents the other side of that argument – that there are bad people who do bad things, and those people need to be punished. They clash very distinctly, but they also bond. They have a shared sense of humour and a bickering brother-sister relationship, so we see a lovely friendship developing at the core of it.

“I’m also interested in the idea of love interrupting cycles of dysfunction, but not necessarily romantic love,” he continues. “That’s an interesting thing that’s playing out across the series, about how loving relationships, platonic and not necessarily romantic or sentimental, can interrupt cycles of abuse and dysfunction, and how we can apply that to the criminal justice system and every area of our personal lives.”

In writing the series, which is produced and distributed by BBC Studios, Hull used these themes to build the characters, “which is not always how I go about creating characters, but I felt this story was particularly theme-driven,” he adds. “That really helped me bring those characters to life and discover how we could explore the themes through the characters’ journeys.”

Hull also knew where the characters would be at the series’ end, which helped him build the story. “That’s the way I find helpful to do it – making sure all the procedural blocks are in place along the way, making sure there are exciting hooks and exciting procedural beats that are going to bring people back, and making sure the cat-and-mouse through-line is taking us through the whole time.”

According to Myles, Lola is happiest when she’s at work – until she is partnered with Jackson, who unwittingly ruffles her feathers from the start. “Through the first episode, you find her very cold, prickly and not wanting to be seen or involved in anything or connected to anybody or anything,” she says.

“Babou’s character keeps pulling her and poking her, so you find her in a vulnerable place. Through the series, you understand how she’s got there, why she is the way she is and why the relationship between Jackson and her is so difficult to make work.”

“In may ways, Jackson’s narrative doesn’t exist without Lola’s narrative,” Ceesay notes. “It’s what reveals who he is, because he’s got a specific view on life. He’s new to homicide, it’s his first murder and he’s working with someone so experienced. This is the first time he’s been able to test his theory of life, which is no one is to blame, things just happen because of whoever they are.

“So this theoretical, intellectual idea he tries to live by, all of a sudden, he’s going to be challenged by actual murders and a colleague who has no time for nonsense.”

Corfield, who plays Freddy, says her character is incredibly complex, living a chameleon-like life in which she can change her appearance to suit her surroundings. “There are so many different sides to her and she has the ability to shape-shift in whatever situation she’s in,” she says.

“What drew me to her was this survival instinct she has. Although she has traits we can’t relate to, she has a set of ideals she sticks to and morals she strongly believes. She uses her attributes to manipulate each person to get what she wants. I loved the survival element and how that fed into her life, because she’s a hustler and she’s constantly trying to weave her way around life, getting the best she can.”

Baba is working in a nightclub bathroom when he first meets Freddy, and she awakens something inside him. “As a former child soldier, to jump from doing that in the Congo to seeking refuge in the UK and working in a bar, it’s the most extreme you could get for one person,” says Ola.

“It was interesting approaching that, because I felt it was a character I wouldn’t necessarily have played at this point in my career, as he’s been through a lot more than his years suggest and that was an interesting thing to wrestle with. But they need each other. Baba likes rules and causes; there’s a cause with her, and that’s what he runs with.”

“She is quite dominant, calling the shots, but he has a quiet, strong power and she knows that, and that’s what keeps her interested,” Corfield adds. “He’s also a dark soul, because of his environment, and she’s got her own demons. They’ve both had extraordinary lives. She recognises something in him that she sees in herself but hasn’t been able to run with until she meets him.”

The first two episodes certainly deliver on both thematic and plot points, introducing the two couples’ relationships and setting the foundations for the chase in a stylish drama that moves back and forth between both pairs’ storylines. With all four individuals crossing paths early in the series, which launches on Alibi tonight, it remains to be seen how Freddy and Baba can continue to stay ahead of Lola and Jackson as their partnership takes a murderous twist.

Viewers should expect a “thrilling, edge-of-their-seat cop thriller that is elevated by the characters,” says Hull, who has also written upcoming Sky comedy Two Weeks to Live, starring Game of Thrones’ Maisie Williams. “Hopefully it’s a fun show with entertainment value at the core of it and tries to make people laugh and cry and really just feel very excited for the next episode.”