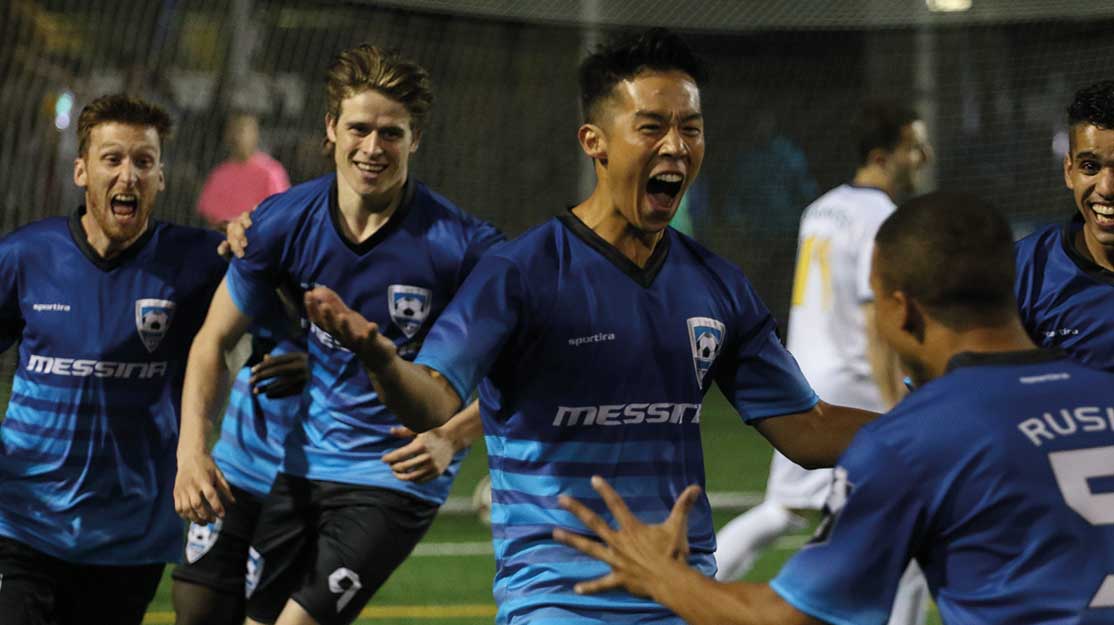 Soccer consultant Philippe Fallu tells DQ about creating match sequences for Canadian broadcaster CBC’s football-themed series 21 Thunder, which follows the drama surrounding the young players of the fictional Montreal Thunder on and off the pitch.

It was an amazing experience for me. I’ve been coaching for more than 20 years and building soccer scenes for 22 players at the same time was a big challenge.

It wasn’t always easy; it was very stressful sometimes but it went pretty well and I was lucky to work with some amazing people.

The TV show was like preparing and coaching four movies. I had two great assistants working with me and I was helped a lot by the directors, especially Jim Donovan, the first director I worked with. All the crew were amazing.

I got the scripts for the first three episodes and three days later I met with the production team to do extra casting. I also had meetings with the writers and directors, where we started to build the scenes. I would draw up some ideas and, at the meeting, I would propose everything and talk with the directors, producers and writers and we would decide if it would work. There was also a camera coordinator there who would give their view on where to put different kinds of cameras. So we had a lot of meetings about the way it would work and who was going to do what.

It was a big challenge because while most of the actors were good soccer players, some of them were not that experienced, so we had to manage that. But they were all pretty good athletes, especially the goalkeeper, played by Andres Joseph. He had no soccer background but we would work in a park for hours doing goalkeeping drills. It was pretty impressive to work with them all.

The speed was a big issue [during rehearsals] because as a coach, you always want to protect your players and avoid any injuries but with this kind of work you can’t even have one injury. If you get one of your actors injured, the show can’t go on. So it was very important to do the rehearsals at 50% or 60% speed and then to slowly increase the pace. We also had to control the intensity because some of the extras who, naturally, wanted to show they were good players sometimes went in [for tackles] too hard or too fast.

It was tough to recreate the sequences but it went surprisingly well. When I was sitting in meetings and drawing up certain scenes, I remember Jim would ask me, “Is this going to work?” But it went pretty well. I took all my inspiration from the soccer I watch on TV, from Serie A (Italy) and La Liga (Spain) to the Premier League (UK). You always want to include something exciting because it’s a TV show, but we had to keep in mind that on shooting days, we had to make it happen.

The first episode sees Thunder’s new signing, Junior Lolo (played by Emmanuel Kabongo), score a last-minute goal from 45 yards to win their first game. That was an exciting and difficult action scene to practice and shoot. That day we had the wind in our face in the direction we wanted to score the goal. The ball went over the goal and beside it. The actor tried to make the right shot as many times as he could, maybe for two hours. Eventually Jim asked me if I thought the actor could make it, and I said I didn’t think so, so we used a throwing machine.

You want to keep it realistic – you don’t want it to be too amazing. As I was told by the directors, it’s a TV show so the bottom line is you’re going to have real soccer fans knowing what it should look like. The principal thing was to make sure we didn’t repeat the same kind of actions. It was a big puzzle but there was great teamwork and I’d do it again any time.