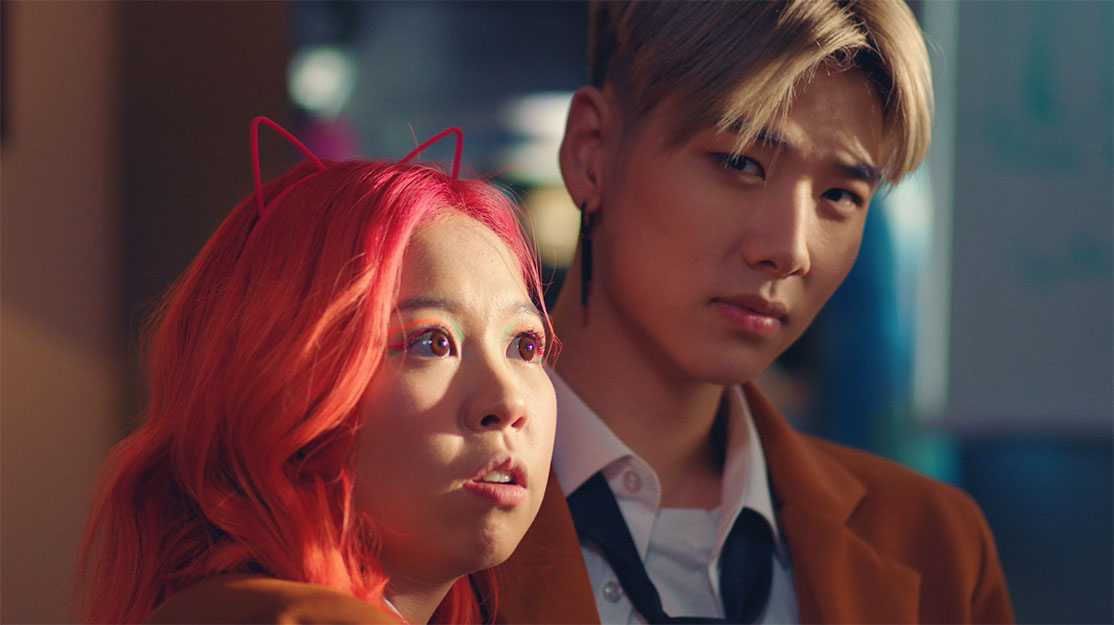 Kazakh YA drama Target found its leading actors in the shape of two popular TikTokers. DQ chats to the production team about the demand for mystery drama and creating stories for the social media generation.

Hiring A-List talent is a reliable way to break through the volume of competing shows and find an audience. For their young-adult drama Target, however, Kazakh producers JKS Entertainment and 1ON Studios went one better and brought together a trio of popular TikTok stars with millions of followers.

Set in the world of an elite private school, the series revolves around high-school senior Mark and his friends, who attend Alma. When Mark first starts receiving mysterious targeted messages on his social media feed, he doesn’t pay much attention. But when the messages describe events that begin to happen in real life, he takes them much more seriously.

Then when he receives a “target” predicting that a life-threatening fire will break out at the school, he realises he must act. Having managed to convince his peers that the danger is real, Mark and co set out to prevent a catastrophe.

The ensemble cast includes Luna McCall (@lunamccall) and @Raidess together with social media superstar @Homm9k, who has 45.7 million followers alone.

Produced by JKS and 1ON Studios, the English-language series began filming in Almaty, Kazakhstan’s largest city, on August 4. While a second season of the show is already in development, no global distributor is attached as yet.

Notably, JKS is the owner of two major TikTok houses – where TikTokers live and work together – in Kazakhstan called BIP House and YOLO House, with an overall international reach of more than 300 million subscribers

Here, JKS CEO Bexultan Kazybek and 1ON co-founders Temirlan Ataulla and Oleg Dyo tell DQ more about the project, which is written by Chingiz Ondasynov and directed by Daniyar Bolotbekov.

What are the origins of Target?
Ataulla: Mystery-themed drama is in high demand from contemporary audiences. The TikTok link also helps generate lots of exciting mini-stories in this genre. That’s why we settled on a story that has a mystery arc featuring real-life stars, turning it more towards ‘dorama’ – a type of Asian drama known for utilising celebrity talent, such as K-pop singers. To help reach a wider audience, the series also includes a variety of adult characters – teachers and parents – who are integral to the story. It would be great if Target could become a series that the whole family binge-watches. That’s what we’re really striving for.

Was the show always designed with TikTok in mind?
Kazybek: Yes, it was originally designed that way and was based on the signature idea of allowing TikTok stars to express themselves as convincingly as possible. TikTok is made up of billions of contributors, but only a few make it to the global arena. It’s all about charisma. I’ve long had a dream to create competitive and cool content with our TikTokers, as I wanted to show that they can be actors too. Of course, we also came up with some perks for fans: the most ‘shipped’ couples [characters that viewers hope will end up in relationships together] will develop romantic relationships in the show as their characters progress.

Ataulla: It was obvious that, sooner or later, an international scripted series featuring Kazakh TikTok talent would be made. There was a desire to collect the best representatives of the industry. The TikTok stars are the new media elite. You must agree, making a story set in a school featuring TikTok idols is a pretty appealing idea. We understand that if we tell a captivating story, audiences will sit up and pay attention. And, of course, we have the talent – these guys are simply fantastic, energising everyone around them and winning over the audience’s hearts with their sincerity.

How did JKS Entertainment partner with 1ON Studios?
Kazybek: As we know, the world is small, as is the media industry. We are all good friends and had been looking for an opportunity to work together and make a project that brings together the best of our expertise and experience. We are very supportive in both areas of our lives, professional and personal. We are convinced that business counts but friendship counts more, so when you fully trust your partner and share the same values, you have only one way to go – to create a really strong partnership.

How was the series developed with the writers and directors?
Dyo: After the main concept was shaped, we outlined the circle of TikTokers who could play parts in the series. We developed and designed characters by looking at their talents, playing to their strengths and covering their weaknesses. After the first auditions, we made some adjustments to make it easier for the guys to ‘live through’ their roles. The development process itself went on as usual. To do this, we were lucky enough to have engaged a dedicated, professional screenwriting team, rich in expertise and experience.

Ataulla: First came the series bible, complete with the arcs and cliffhangers, for the first season. We also developed portraits of the core characters in microscopic detail. The subsequent pilot episode also helped us enrich and enhance the overall series direction.

How did you cast the TikTokers?
Kazybek: We set the same bar as would be set for professional actors. Of course, it took us some time to prepare them for the filming process but, thanks to their diligence and versatility, they successfully passed the audition stage. Generally speaking, the way the TikTokers approached the work and the results they delivered amazed even the more skeptical among us. Results provided by focus-group testing, based on the pilot episode, quickly demonstrated their talent, skill and commitment.

What was your approach to filming and producing Target?
Ataulla: We were guided by the idea that the story should be as close and relatable to a young audience as possible. The TikTok audience is not kind to ‘Martians from another planet,’ but fortunately our team are real people who, besides TikTok, do a lot of other things too. At the same time, thanks to the tremendous experience of the JKS team, we were able tap into popular recent trends and a familiarity of real life, within a very authentic idea.

With so much content available to watch, how did you try to ensure viewers would be hooked on the series?
Kazybek: This is all about the story. Only through well-written, relatable characters and their adventures is it possible to hook your audience. And remember, on TikTok, if a video is a hit, it is viewed again and again.

What was the production experience like?
Dyo: A road is made by walking, and the entire production team was involved in the project from the very beginning. This is the first time such a large-scale project has come from Kazakhstan, especially one with a potential audience of more than 300 million people – the reach of JKS’s TikTok houses. Everyone, from the director and cameramen to the electricians and drivers, worked really hard. We see our company’s mission as moving to the next level in terms of the quality of the content we deliver. Kazakhstan has long been ready to become a strong player in TV and film production. It’s time to step up and move to the next level.

How was Almaty used as the backdrop to the series?
Ataulla: Despite the fact the main setting is an elite school, we feature a lot of outdoor landscapes too. Almaty has some remarkable mountain views, and we use these throughout the series to help give it individuality and special expressiveness. Most importantly, however, it’s the diverse palette of actors and behind-the-scenes talent attached to the series that reflects the real soul of our city, combining a mixture of nationalities living in peace and harmony.

What challenges did you face making the series?
Kazybek: One might expect that big challenges could arise from the differences between filming a video for TikTok and portraying a character in a linear scripted series. The actuality was that our team did a brilliant job. They were fully engaged and studied deeply their characters’ motivations. Challenged to ‘live through and feel their problems, daily routines and the everyday small things that make them happy or worried,’ they created the images we see on screen. Filming had a really positive vibe – something you only get with great teamwork.

What did you learn from making Target?
Dyo: The main lesson is that if you set an ambitious goal and properly communicate it to your team, you can reach a whole new level of quality. In our case, that goal was to create a significant international franchise that will last for many seasons, and the whole team was highly motivated to achieve this objective.

What is the future of the series?
Ataulla: This is our call to the industry: we are looking for the best home for Target. We feel it could sit on well on a variety of global platforms, as the story is unique, contemporary and eye-catching and, for the first time, combines an ensemble cast of well-known TikTok stars and professional talent. Furthermore, our objective is to create a comfortable space to work together with international crews and talent to develop content that will resonate around the world.

What are you working on next?
Dyo: We would love Target to become a franchise, so we are already developing the second season. In addition, we have a number of other projects in the pipeline – a teen pregnancy series, a musical drama and a feature film mixing the melodrama and comedy genres.

Ataulla: 1ON Studios is working with a diverse mix of global talent targeting Central Asia and the plan is to keep moving forward, producing shows with international casts and telling stories that will work for viewers anywhere. We’re open to everyone who shares the same values and goals – so if you want to make cool content that you will be proud of and the world will watch, we are walking the same path.

How would you describe the scripted drama landscape in Kazakhstan? What opportunities or challenges are there?
Kazybek: There is an incredible breakthrough in the quality of the content produced – a real renaissance is happening in the cultural space in Kazakhstan. YOLO House and BIP House are among the top TikTok houses in the world; [Kazakh DJ and music composer] Imanbek recently won a Grammy award; and [Kazakh music star] Dimash Kudaibergen is one of the most popular rising stars in China.
In recent years, Kazakh rap has become popular, while Kazakh directors are regular award winners at the world’s most prestigious film festivals. As such, we believe it’s only a matter of time until a TV series from the region gains global recognition in much the same way that Israeli or Turkish series have found international acceptance. We sincerely hope Target will be the first step in this direction.