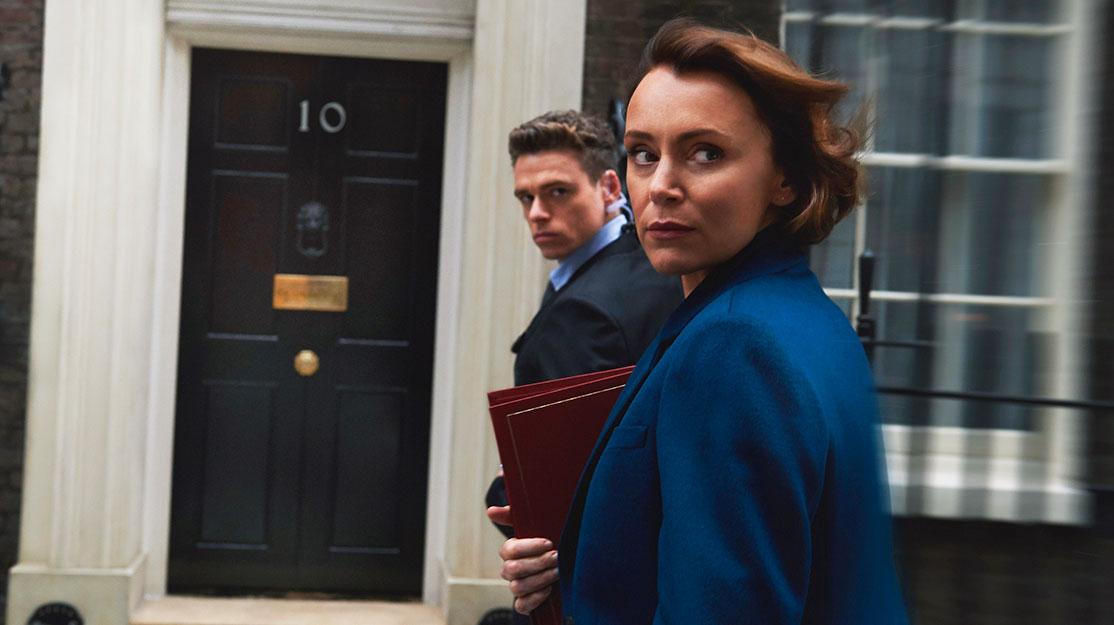 With the long-awaited fifth season of crime drama Line of Duty not due to air on BBC1 until 2019, two years after the fourth run, fans of the series could be forgiven for getting slightly impatient over the return of what has become one of Britain’s biggest dramas. To whet their appetite, however, series creator and showrunner Jed Mercurio will be back on the same channel this Sunday with a brand new series.

A six-part political thriller set within the corridors of power, Bodyguard tells the fictional story of David Budd, played by Game of Thrones’ Richard Madden, a heroic but volatile war veteran now working as an officer of the Royalty and Specialist Protection Branch (RaSP) of London’s Metropolitan Police.

When he is assigned to protect the ambitious and powerful home secretary Julia Montague (Keeley Hawes), whose politics stand for everything he despises, Budd finds himself torn between his duty and his beliefs. Responsible for her safety, is he actually her biggest threat?

Thomas Vincent directed block one of the production, while John Strickland took charge of block two, with Priscilla Parish producing.

It’s a gloomy January evening when DQ pitches up at an opulent apartment block overlooking Battersea Park in south-west London, in the shadow of the former power station currently undergoing an extensive redevelopment as it prepares to house Apple’s UK HQ. A luxury flat on the first floor is home to Hawes’ high-flying politician and, inside, Mercurio is sitting on a sofa in the living room, watching filming on a monitor while safely out of shot.

The cameras are focused on Madden as he climbs the staircase and lets himself into the pitch-black apartment, before making his way towards the bedrooms, clearly looking for someone or something. Owing to the fact this is a scene from episode five, DQ is left in the dark over any further plot details.

Tracing the origins of the series, Mercurio goes back to 2014, when Line of Duty aired its second season, then on BBC2. “We started having a conversation with the BBC about developing a thriller to work on BBC1,” he recalls. “That was the genesis of it, wanting to set something within the world of the police but within an area we hadn’t seen much of recently and possibly also combining it with a political thriller. So those were the initial thoughts. Then development took place on and off while Line of Duty continued. Then it was before season four of Line of Duty went out that this was greenlit into production – the plan was always to do this after season four.”

In the kitchen of the apartment are photos of Hawes’ character next to former British prime minister David Cameron. But with Cameron now out of office for more than two years, Mercurio notes that Bodyguard isn’t aiming to reflect contemporary headlines.

“I don’t think you can make something topical when you’re making a drama that’s not going to go out for six months after the last script is written,” he says. “There are certain things we know will be in place, like our system of government, so you can work around that. But it’s not meant to be topical about anything that’s happening on a week-by-week basis. Some of the themes in the show about a terrorist threat, our foreign policy and the relationship between politicians and how that threat is managed seem to have been present in our political system for a decade or more, so I think we’re on pretty safe ground in terms of it still feeling timely.”

Bodyguard, which packs each episode with stunts and action set pieces, reunites Mercurio with both Madden and Hawes, with whom he previously worked on Lady Chatterley’s Lover and Line of Duty respectively. Madden’s character David is an armed forces veteran turned police protection officer who is still struggling with the burden of his experiences, while Hawes’ Montague is a security-focused politician attempting to push through a bill to beef up security services’ powers to monitor communications.

“She’s a tough, kind of hawkish home secretary,” Mercurio explains. “The basic point of contention between them is he’s got experience of our foreign wars and she’s someone who has supported those ventures politically. His experience has been that those things have had a negative impact on our society.”

Hawes was one of the first names suggested to play the home secretary, according to executive producer Simon Heath, CEO and creative director of World Productions. “Richard I hadn’t worked with before, but Jed had, and I’d seen how good he was. It felt like a good thing to go for a younger actor in that role and create that interesting dynamic with Keeley. I think we’re fortunate to get them both.”

While Line of Duty now has continuing storylines to pick up, Bodyguard afforded Mercurio the chance to start a new story from scratch. “It involves more work in setting up the characters and the world, but it’s completely serial – six hours with a definite conclusion at the end of the six episodes.”

Mercurio was also able to continue the showrunner role he has carved out for himself, a position still rarely seen in British television. “I’m very fortunate to be able to do that,” he admits.

Heath picks up: “I think it is still rare but Jed does it really well and really thoroughly. What it means is if you get locked into directing something you’ve written, it’s very hard to stand back and get an overview. But the position Jed takes is that he gets a fantastic overview of the whole thing taking the scripts to screen. That works brilliantly for Line of Duty and has worked brilliantly for this as well.”

Filming Bodyguard across London has posed the familiar challenges faced by dramas shooting in the English capital. Heath says it’s “not a particularly film-friendly city, in truth,” adding that Wales, Scotland, Birmingham and Belfast – where Line of Duty is made – offer an ease of production not available in London.

“It’s basic things like getting permissions to close roads to do stunts or trying to get access to locations or unit bases,” he explains. “For the general public, it’s dull stuff, but it’s absolutely essential in terms of servicing a production and it does make it incredibly challenging. We’ve been in the very centre of London and did big stunts round the back of Holborn. It looks fantastic on screen but it’s tough because we haven’t got unlimited resources. We haven’t got Hollywood budgets and we have to box clever to get this stuff in the can.”

Mercurio adds: “It’s easy to form the view that if a Hollywood production has got Tom Cruise running around then various London boroughs will roll over and give them the facilities they want, but if the national broadcaster is trying to make something here, it’s a bit harder.”

With the global trend for big-budget coproductions, Bodyguard stands out for using the traditional model of broadcaster, producer and distributor to build its budget. But as Heath admits, Bodyguard is at the “outer reaches” of that model in terms of financing a show with the scale of the BBC1 series.

“But it’s been a good thing because we haven’t had any other voices telling us what the show should be,” he says. “We’ve had a lot of support from the BBC but we’ve been allowed to get on with it. I like to think that model is still viable. Not everything has to be a huge coproduction.”

“We’ve just been really grateful for the BBC support on this,” Mercurio adds. “There’s no need to involve another broadcaster because they’ve backed us to the hilt. I’m not saying anything negative about other broadcasters, but if you’re in the position where you have one broadcaster, you’re delivering to one organisation, one channel, with one ambition in terms of what they want for their audience, it does make it a little bit easier editorially.”

If Bodyguard finds an audience, Mercurio says he would definitely like to return to the series. Until then, he is back in charge of Line of Duty, with season five set to begin production this autumn.