Oliver Stone and the politics of drama

Anyone who was at the Cannes Lions International Festival Of Creativity this week would have been able to hear Oscar-winning director, screenwriter and producer Oliver Stone talk about his new movie Snowden, which tells the story of Edward Snowden, the computer whizz who leaked huge amounts of classified data from the USA’s National Security Agency (NSA), his former employer, in June 2013.

Stone, who is not shy of tackling controversial political subject matter, was speaking during a session organised by Guardian News & Media. For him, the fascination of the Snowden story seems to be what it has to say about the power of the state and its increasing reliance on tools of mass surveillance, which he referred to as “Orwellian” on more than one occasion. For Stone, the terrifying world of 1984 and the Ministry Of Fear has arrived and Snowden, exiled in Russia, is one of the few to have kicked back.

Interestingly, Stone doesn’t see the current state of affairs as purely a product of government. In an analysis reminiscent of Noam Chomsky’s work on the military-industrial complex in Western societies, Stone railed against the expansion of the US military and its reliance on war (including the War on Terror) as a justification for its existence. He also implicated a number of other parts of the establishment for their role in normalising the current unstable state of affairs. With a few exceptions (such as The Guardian), he criticised the media for pandering to the state’s power and online companies for acquiescing to state-sponsored surveillance. He also took a pop at Europe, for its subservience to the US, and the US movie studios that collectively refused to back his latest feature film outing (it took German and French financing to get Snowden into production and a patchwork of 20 distributors to get the film to an international audience).

Outside his immediate fanbase, Stone is often thought of as a filmmaker with a loaded political agenda. But this is an accusation he refutes. Commenting on the detailed analysis that goes into his development, he said: “I’m a dramatist. I can’t take sides. I do a lot of research and tell the story that evolves. With my films on Nixon and Bush, I actually had complaints that I was too sympathetic.”

One of the big challenges with Snowden was taking a story that is, at its core, about a computer geek downloading information and turning it into a drama that could live on the big screen. Part of the way Stone did this was by building up the personal drama around Snowden and his girlfriend Lindsay Mills – dismissively referred to in the media as a pole dancer. He also looked at why a young man who had been so pro-establishment in his formative years would suddenly elect to become the world’s most famous whistle-blower (a story reminiscent of the journey in Stone’s film Born on the Fourth of July). “I had to walk in Snowden’s footsteps and try to feel what he was feeling. The end result, I hope, is a gripping political thriller.”

The lion’s share of Stone’s work has been in film – notably titles like Salvador, Platoon and JFK. His one outing into TV was a documentary series for Showtime entitled The Untold History of the United States, through which he shone a light on some of the less admirable part of US history.

The lack of scripted TV series from Stone may suggest he is more free to express himself through film. But there is a growing body of great work on TV that shows it is possible for writers to tell complex political truths on the small screen. Here are a few of the best examples that underline this point. Hopefully in the near future Stone will also be tempted to join the growing number of filmmakers who have decided to try their hand at TV series. Perhaps he could took take a break from fact-based storytelling and be the man to reimagine 1984 for the small screen… 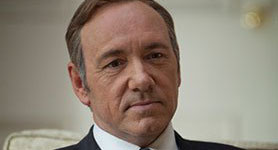 House of Cards
Beau Willimon’s adaptation of Michael Dobbs’ novel for Netflix is a superb exploration of the Machiavellian nature of modern American politics. Starring Kevin Spacey, it shows the corrupting influence of the quest for power and raises questions over the extent to which policy decisions are driven by ambition. 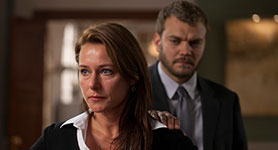 Borgen
Adam Price’s exploration of the rise of Birgitte Nyborg to become prime minister of Denmark is widely recognised as one of the best political series of recent years. Written for Danish public broadcaster DR, it provided a fascinating insight into party politics while addressing the challenges of being a female politician. Price is tackling the subject of faith in his latest show Rides on the Storm. 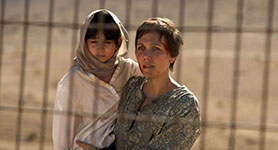 The Honourable Woman
For the country that gave us James Bond and John le Carré, the UK doesn’t deliver that many dramatic exposés of the establishment. The original House of Cards, Edge of Darkness and State of Play are a few standout exceptions. Possibly this is because the Brits tend to fall back on period pieces or comedy satire when criticising politicians – though this may explain why the country is not very good at interrogating its political class. One recent show that stands out is Hugo Blick’s acclaimed drama The Honourable Woman, which beautifully explores the interplay between personal ambition and geopolitical conflict. 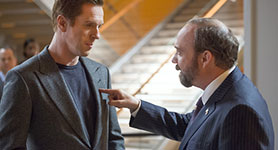 Billions
Created by Brian Koppelman, David Levien and Andrew Ross Sorkin, Billions is an intelligent attempt to get under the skin of the US financial sector. Starring Damian Lewis and Paul Giamatti, it tells the story of a corrupt hedge fund manager who uses insider trading and bribery to build his empire. With an IMDb rating of 8.4, the show has been well received and recently earned a renewal.

Fauda
Hard-hitting Israeli series are now part of the landscape of the international TV industry (Homeland, False Flag). The reason YES’s Fauda stands out is that it is tries to bring both sides of the Israeli-Palestinian conflict to the TV screen. Created by Lior Raz and Avi Issacharoff, the series focuses on an elite undercover unit of combat Israeli soldiers who disguise themselves as Palestinians. It is regarded as the first time that an Israeli TV drama has depicted terrorists as people with wives and children.

The New Odyssey
Colin Callender’s production company Playground recently acquired the rights to Guardian journalist Patrick Kingsley’s book The New Odyssey – The Story of Europe’s Refugee Crisis. Throughout last year, Kingsley traveled to 17 countries along the migrant trail, meeting hundreds of refugees making their journey across deserts, seas and mountains to reach Europe. His book is an account of those travellers’ experiences. At the time of writing, no screenwriter has been attached to the project. 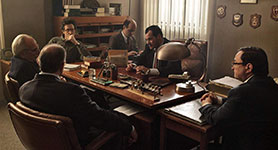 1992
TV has a habit of treating politics as a period subject. Often this leads to interesting shows. But apart from a few allegorical references to the present, it doesn’t really cut to the quick of the contemporary debate. One exception is 1992, a series for Sky Italia created by Ludovica Rampoldi, Stefano Sardo and Alessandro Fabbri. The series looks at the political upheaval in the Italian system in the 1990s. However, similarities to the current situation in Italian politics give the show a particular resonance.

Assembly
Korea is best known for its romance and historical drama, so KBS series Assembly is something of a novelty. It features a brave and honest shipyard welder who gets elected to the country’s national assembly. He is out of his depth until helped by an aide. The show is based on screenwriter Jung Hyun-Min’s own experience working as an aide for 10 years before breaking into TV. 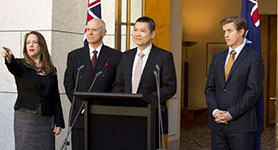 Secret City
This new political drama from Australian pay TV platform Foxtel is based on Chris Uhlmann and Steve Lewis’s novels The Marmalade Files and The Mandarin Code. Adapted for TV by the writing team of Belinda Chayko, Matt Cameron, Marieke Hardy, Alice Addison, Tommy Murphy, Kris Mrksa and Greg Waters, it follows a journalist who uncovers an international political scandal while investigating the death of a young man.