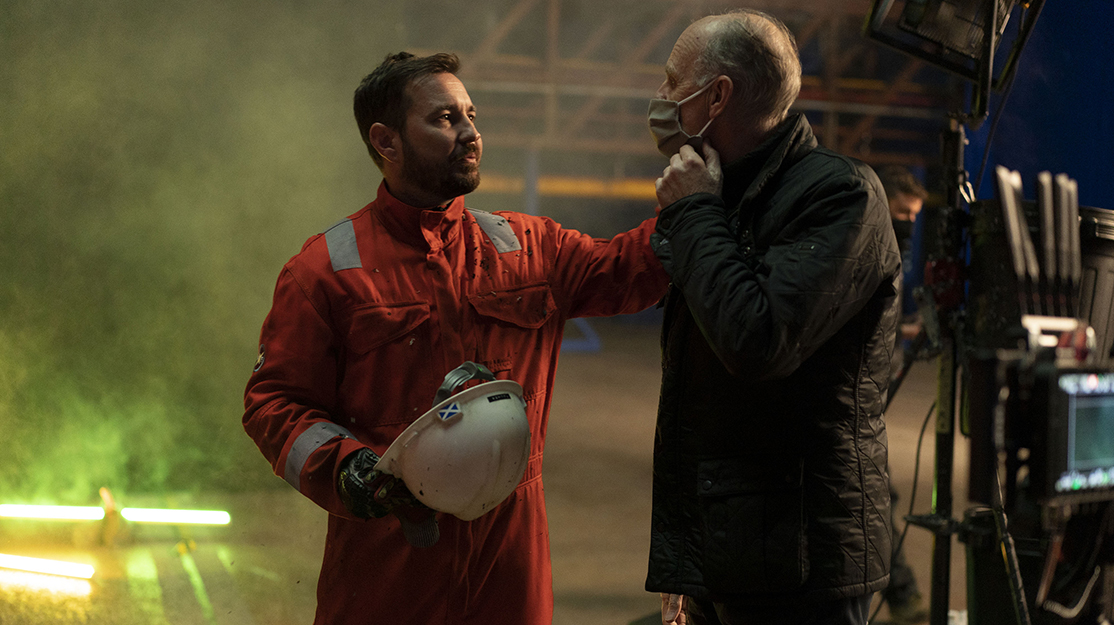 It’s hard to think of a better purpose-built precinct for drama than an oil rig. “They are in many ways a perfect contained thing,” says screenwriter David Macpherson. “Remote and dangerous, they contain a cross section of society, all divisions of class and power structures.”

Yet television dramas set on rigs have been rare. Recent Swedish thriller Rig 45 used one as the basis for a murder mystery, but otherwise they have been the preserve of big-budget movies, from true story Deepwater Horizon to venerable Roger Moore thriller North Sea Hijack. Macpherson aims to change that.

Having come into Wild Mercury Productions for a chat about a sample script for “a Fargo-esque thriller set in Scotland,” the Scot mentioned his father’s career, which began in the construction of oil rigs before he moved offshore as part of a repair crew. “There was a sense of almost having a separate life,” he says. “He was away exactly the same amount of time he was home. He would tell us a lot of fun stories, but it was always hard to get a grasp on what he was actually doing – we always joked that he was a spy.”

Wild Mercury exec producer Derek Wax was immediately intrigued and commissioned a script for The Rig – Macpherson’s first series – which they took to Amazon Studios. An obvious choice for budgetary reasons, Amazon were also sound creative partners. “They responded to the ambition and potential of the story,” says Wax. “Like us, they felt David’s characters were so relatable and real, so authentic, born out of research and his knowledge and imagination. By putting the scripts into development, Amazon allowed us to really dig into the themes and characters with David.”

That story is on the surface a predictable one: a tale of normal people in a dying industry, working and playing hard. But Macpherson, who took environmental studies at Edinburgh University and worked for climate-change charities, wanted to introduce an ecological element in a novel way. Alien’s “blue-collar gothic” inspired not only the grimy realism of rig life, but also the ghoulish, perhaps supernatural turn of events as a sinister fog descends and cuts the crew off from the outside world: could Mother Nature be about to retaliate after centuries of human exploitation?

“The genre element is great fun and lets you come at these issues without making it a lecture,” Macpherson says. “I wanted to ask questions about the environment and address climate change, but also ask what it means for the everyday people who work in the industry – we have to make sure we don’t leave all these people behind.”

All involved agreed with the importance of filming the series in Scotland, whose history is inextricably linked with North Sea oil. A recce to a real rig off Orkney was instructive in terms of atmospherics and technical details, but Covid and sheer logistics ruled out filming there; more happily, it also allowed the series to be made free from the censorious agendas of oil companies. The only concern was whether a studio space existed to offer both the scale and space The Rig would require.

First Stage, Bob Last and Jason Connery’s new studios on Leith docks, opened in March 2021 and has become a de facto Scottish base for Amazon, with Neil Gaiman duo Anansi Boys and Good Omens (S2) both filmed there. But The Rig was the first, its newness necessitating almost building a studio as the series was being created, from installing overhead rigging to bringing in portable toilets. “At one point, we wondered whether we’d be able to build that set in time,” laughs director John Strickland.

But it had plenty going for it: proximity to water in Leith docks, access to increasingly in-demand Scottish crews and, above all, sheer scale.

“We used shipping containers stacked on top of each other, with a lot of walkways and staircases welded to that,” production designer Rob Harris explains. “There was a ship being broken up in the adjacent docks, so we took lots of bits off that for the control room and communications tower. Everything was big and metal – not many curtains on this job!”

While the post-production work has been substantial, the actors always had a real set to work in, with remarkable attention to detail that extends from tiny, claustrophobic cabins to the comms tower that, at a good 10 metres tall, is still only half the size of a real-life tower. Oil stains are everywhere, there is a helideck built to take the weight of a chopper (one was in fact winched in from the rafters, minus blades, for a key scene) and blood is splattered in the basin of a shower room – the aftermath of something very bad indeed.

It’s no spoiler to reveal that not everyone makes it to the end of The Rig, which debuts on Amazon’s Prime Video on January 6. Too bad for the actors Macpherson refers to as “the Scottish Avengers.” Iain Glen plays offshore installation manager (OIM) Magnus, respected middleman between crew and oil company. Martin Compston (one of five Line of Duty alumni to work under that series’ director Strickland, and another whose father worked on the rigs) is withdrawn comms officer Fulmer. Emun Elliott is troubled chief mechanic Leck and Mark Bonnar is deep-thinking deck foreman Olwen, alongside representatives from Wales (Owen Teale’s old-school head driller Hutton), England (Rochenda Sandall’s no-nonsense medic Cat) and North America (Schitt’s Creek’s Emily Hampshire as company rep Rose).

All the cast have enjoyed immersing themselves in the world. Hampshire, for one, has turned into something of an amateur geologist. “I’ve been obsessed with it,” she enthuses. “Now I want there to be more geology, when before I was like, ‘Maybe we could make a sign that says everything I have to say?’”

“It was really satisfying to see people becoming a bit nerdy about the whole thing,” says Wax. “We’re telling a story that asks some big questions as well, about the environment and about where we’re going as a species, but in a way that was always grounded in character.”

Ever-present on set was Derek Anderson, who worked his way up to become an OIM like Magnus, fulfilling the role for 25 years. A walking bible of life on board a rig, from safety measures to inter-crew banter, he was invaluable for the cast. “He had this wonderful phrase – ‘You’re ‘responsible for everything, but have control of nothing,’” says Glen. Everyone looks to you for answers.”

The shoot didn’t come without its moments of peril: Bonnar flirted with hypothermia while filming in the dry dock and getting soaked by bucket after bucket of water at 4am one morning in March, while Glen took a tumble off a girder while attempting to rescue one colleague (the harness he had long argued he wouldn’t need saved him). But Strickland was keen to keep things as immersive as possible – for actors and viewers.

“I wanted to ignore the fact that we had some blue screen and some real set,” he says. “We had a very visceral, exciting, energetic story where characters were roaming around that rig and the camera wanted to follow them wherever they went, not caring about shooting off to a blue screen. I ignored the effects element in certain scenes. I didn’t let it get in the way.”

“They’re all can-do people in TV,” concludes Macpherson, admiringly. “If you present a problem to them, it’s not ‘we can’t do that,’ it’s ‘how can we do that?’”