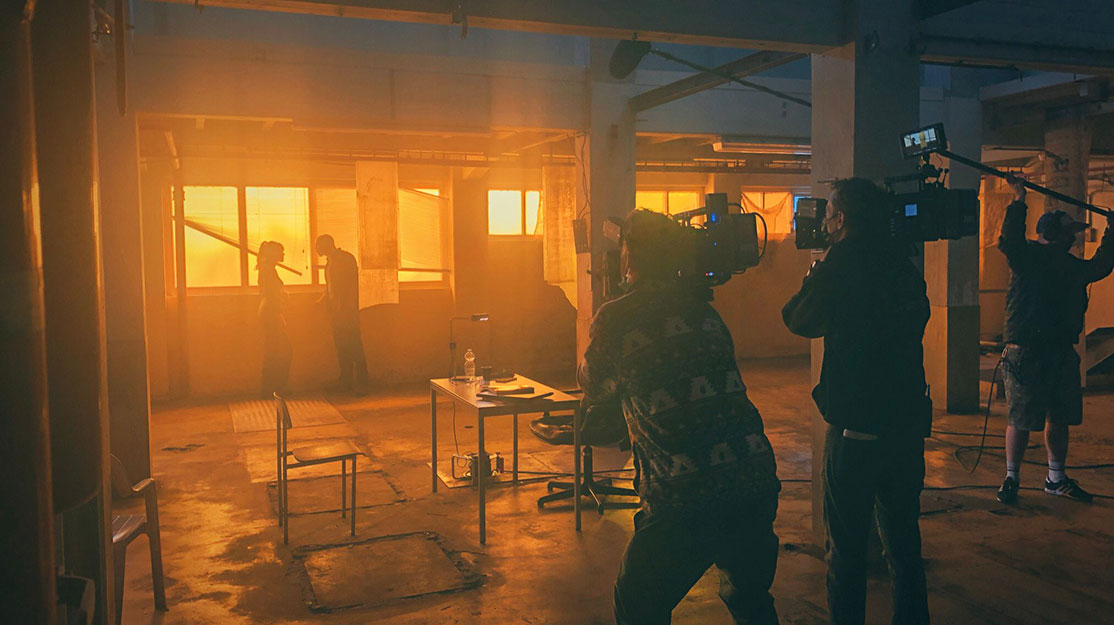 No time to lose

Dutch drama Het Gouden Uur (The Golden Hour) explores what happens when a deadly terrorist attack targets a busy city and how one police officer becomes caught up in the aftermath. DQ finds out more.

A six-part action thriller set in the aftermath of a deadly terrorist attack in Amsterdam, Dutch drama Het Gouden Uur (The Golden Hour) examines the importance of the first 60 minutes after such an event and how the first responders make crucial decisions that will determine what happens next.

The fast-paced series follows the consequences of the attack from the perspective of the victims and the perpetrators, as well as the medics on the ground and police officers who must do everything they can to prevent a second attack.

Central to the story is Mardik, a tough but sympathetic Dutch detective of Afghan descent. One evening, Mardik receives a disturbing text message revealing that his childhood friend Faysal has come to the Netherlands. When a terrorist attack is carried out the next day, Mardik immediately suspects Faysal and goes to investigate, all while the secret service (AIVD) begins to suspect it Mardik himself is involved in the attack.

Starring Nasrdin Dchar (as Mardik), Ellen Parren, Matteo van der Grijn and Abbas Fasaei (Faysal), The Golden Hour is produced by NL Films for broadcaster Avrotos’s NPO3 channel and distributed by Mediawan Rights. It is due to air this autumn.

What are the origins of the project?
De Waal: It’s an original and fictional story, in which I was able to put my experiences as a police detective in extreme circumstances to good use. I’ve been trained to deal with the threat of a terrorist attack and I work with a lot of specialised units that deal with these kinds of events.

I’ve always been fascinated by what kinds of emotions these events bring out in people. You truly learn who you are when you find yourself under this extreme pressure. On the other hand, I myself also encountered a lot of prejudice, even from within the police force. Combining these facts seemed like a great opportunity to write an exciting but also deeply emotional series.

What was the writing process like?
De Waal: It was a beautiful, deep but long process, in which I paid very close attention to the cultural background of the story. To do so, I had a lot of contact with people of Afghan origin who live in the Netherlands. Then I had the first versions of the script, after which I started fine-tuning, first with the creative producer and then with the director. That was a wonderful time, because I experienced a lot of belief in the project from everybody involved. We all wanted to make it the best series it could be.

How much research did you do and what key elements did you use in the series?
De Waal: I’m fortunate that I didn’t have to do any research to do with the whole background of being a detective. With 43 years of service, I have that knowledge like no other. Therefore, I was able to immerse myself completely in the Afghan background of the story, in which everything had to be right. Furthermore, I had conversations with colleagues from various backgrounds to investigate how they sometimes feel viewed and treated. That was actually the very start of my story: how are you being judged by others because of your culture or appearance?

How did you want to present the terrorist characters? Do we learn about their motives or backstory?
De Waal: Yes, we do learn about their motives and backstory, just not with everyone. I know better than anyone that there are people in the world who will commit heinous crimes without blinking an eye. In our series, the three most serious terrorists are like that; mercenaries from the underworld. Yet there is one who hesitates, and we do get a little more insight into his motives and dreams for his future.

From the main character, the antagonist, we get more backstory. I think everyone has a motive, a reason, for doing something. The question is whether you can, in some way, understand their motive. I don’t think that question will be answered until the last minute of The Golden Hour.

How do you play with time through the series, with its focus on the first hour after a terror attack and the use of flashbacks ?
De Waal: The flashbacks are used to clarify the backgrounds and the emotional history between the two main characters, Mardik and Faysal. In the present, the story focuses on the first hour after an attack, but it is not as if we experience that hour in real time. Neither did we choose to use a 24-like dramatic structure. The Golden Hour is a bit more conventional in its use of time and there’s a lot of cross-cutting between the many points of view we use to tell our story. As the plot develops, there is a need to use more time than the one hour after an attack. To see why that is, you’ll have to watch the show.

The show has hyper-real action footage. How did you achieve this visual style?
Boermans: In real life, terrorist attacks are very messy, brutal and cold-blooded. The series has been inspired by terror attacks from the past, including those in Paris, Nice, Berlin, Madrid and some failed attempts in the Netherlands. We also looked at YouTube clips and watched tons of footage from security cameras and dove really deep into the history of terrorism.

We determined pretty early on in pre-production that the best way to capture this painful realism was by shooting the series on fluid zoom lenses with multiple cameras. That way, we could constantly keep the blocking of the actors fresh and dynamic. Actors could freely move around and we could switch from wide to close-up shots in the middle of a scene, without even thinking about it, but rather just feeling it. Because of this, the audience subconsciously and emotionally feels like they’re right in the action, next to the actors, experiencing everything the same way the characters are.

Another creative decision we took right away was to never make things too clean in terms of make-up, wardrobe or lighting. We would ignore the somewhat ‘holy’ 180-degree rule and shot/reverse shot rules; it all went overboard. That way, the series slowly absorbed a more documentary-style DNA, while still holding on to the fictional thriller elements. It was one of our main goals to constantly search for that intricate balance of Euro-realism, combined with the more plot-driven classical intriguing police series.

Where was the series filmed and how did you use locations in the story?
Boermans: The Golden Hour centres on multiple terrorist attacks in and around Amsterdam. We tried to film in Amsterdam as much as we possible, but we also shot in Haarlem, Roosendaal and different parts of the Netherlands and Belgium.

Shooting such large-scale attacks in Amsterdam proved to be a logistical challenge, since it’s a very crowded city that takes any security risk very seriously. We found our solution by doubling certain locations as stand-ins. For an attack on a market, we had to create an actual market from scratch, fill it with extras, take over the neighbourhood for a couple of weeks, and afterwards completely destroy it again. We shot it in Haarlem, which was great because it had high vantage points and tall buildings, which immediately gave a sense that the attack could come from anywhere. We had stunt people, police cars, SWAT teams and helicopters flying to capture all the footage.

We filmed the police command centre at an actual showroom that showcases these systems and operates them for the Dutch police. It gave us the benefit of using the real systems. We also had constant assistance on set from real cops and SWAT operators to help with terminology and weapons handling, which makes everything more believable.

We filmed one of the attacks in a real shopping mall in the city of Roozendaal, Netherlands. But because of Covid-19, all the store owners had to close up shop and, therefore, the building was left empty. Once they allowed us to film there, the main challenge became to fill a completely empty shopping mall with props and make it look like a lively mall once again. The art department created bakeries, wine shops, flower stores, clothing and shoe stores, and even a full supermarket. They worked nights and brought in dozens of trucks to prepare everything in time for shooting.

What challenges did you face in development or production?
Boermans: The main challenge was filming with so much loud noise – gunfire, explosions, squad cars and screams – in real neighbourhoods at seven in the morning. There were some occasions when municipalities and mayors had to pull out last minute because of all the complicated logistics in combination with our intense production schedule. Everything constantly depended on location, location, location, because the location ultimately determined the way characters would enter a scene or have certain sight lines.

We were lucky that we ended up with exactly the locations we always had hoped for. But it took some real heavy politics, lobbying and persuading to be able to shoot right in the centre of functioning middle-class neighbourhoods. During production, we also had to deal with Covid, so every extra had to be tested each morning on set. With a few hundred extras each morning, those time sheets add up quickly throughout your shooting day. Only on a few occasions did actors tested positive, but luckily we were able to solve this without anybody noticing it in the drama.

How does the series stand out from other action thrillers?
Broman: What makes this thriller unique is its human and emotional dimension. While the pace and intensity of the story is there and very captivating, it is balanced by the empathy one feels for not only the main character, Mardik, but also for everyone in the show who is directly affected, in real time, by the terrorist attacks.

Apart from the fact that terrorism can hit any city in the world and is therefore, in its terrifying nature, a universal theme, it is more the human question of integration and identity that makes the story extra special. You have a central character, Mardik, who some in the secret service see as suspicious just because of his Afghan origins – he came to the Netherlands as a war orphan. It is that central theme of identity, coupled with the sad reality of systemic racism, that I find very powerful in this series and is the reason I am confident will resonate strongly with audiences worldwide.