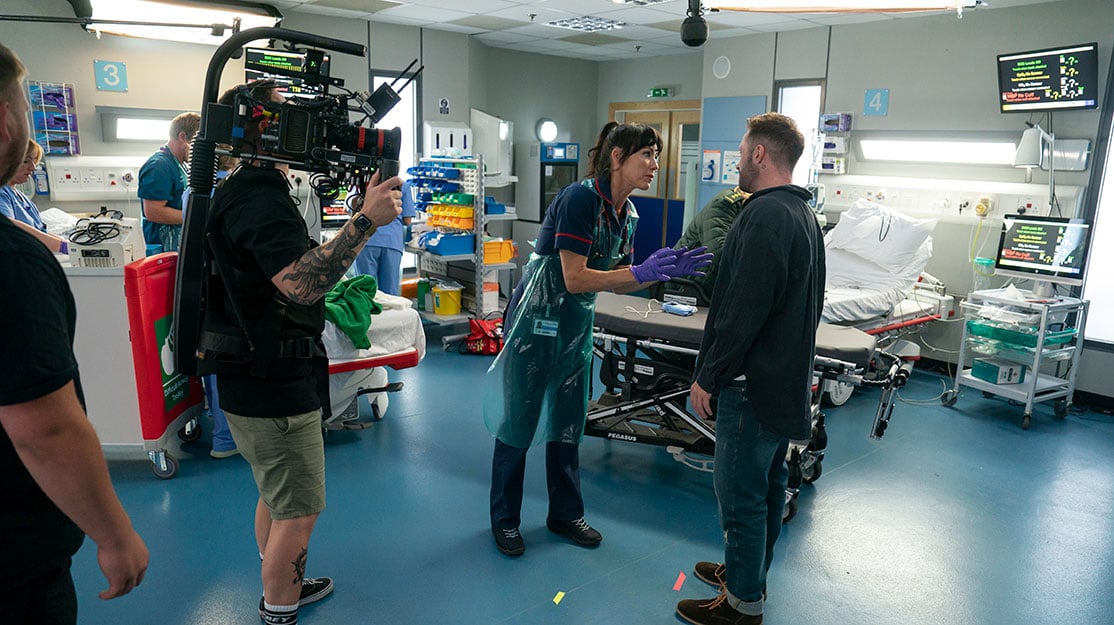 No script to screen

Casualty executive producer Jon Sen and director Steve Hughes open up about filming an entirely improvised episode of the long-running BBC medical drama, which also shines a light on the current crisis around ambulance response times in the UK.

Across 37 seasons since its launch in 1986, long-running BBC medical drama Casualty hasn’t been afraid to highlight real-life issues affecting front-line hospital staff. Nor has the series shied away from mixing things up when it comes to its traditional scripted format, which brings together the personal and professional lives of the Accident & Emergency (A&E) staff at the fictional Holby City Hospital with numerous guest stories in each episode.

Notable recent episodes include a January 2021 instalment that showed the difficult realities of battling Covid-19 in A&E, while the season 31 finale was filmed in a single take. A July 2020 episode, meanwhile, was dedicated to the show’s first regular deaf character and highlighted what life can be like with a hearing impairment.

Now, Casualty is breaking boundaries again with an entirely improvised episode. Airing on BBC One this Saturday, Thin Green Line features a state-of-the-nation story that dramatises how hospitals and paramedics are battling against long ambulance waits and their knock-on effects, pushing patients, staff and the broader National Health Service (NHS) to breaking point.

“Reflecting the truth of the NHS, what’s going on in the NHS and authentic representation of the challenges of NHS front-line staff is always part of Casualty’s raison d’être,” executive producer Jon Sen tells DQ. “It’s always been hardwired into its DNA. When we think of stories, ongoing storylines and where we’re going to take the show, reflecting the NHS and the stories that are there is always at the forefront of our minds.

“Obviously post-pandemic, one of the defining issues of NHS hospitals has been the queues of ambulances outside and extended waiting times. We’ve all heard about the struggle to get an ambulance, and we just really wanted to tell a factual story about the impact that has not only on the NHS but also on the lives of the paramedics themselves.”

Casualty, Sen notes, has five core values – heart, wit, adrenaline, authenticity and entertainment – that need to be in every episode. Authenticity is particularly important as the show seeks to reflect the experience patients have when they go to a hospital or interact with different aspects of the NHS.

And while Sen stresses that Casualty is a non-political series, he says it always strives to reflect the truth of the NHS and be honest about the troubles facing a health service dealing with an ageing population and a decline in social care in a post-pandemic Britain. “So we felt an improvised, naturalistic reflection of that drama would really chime, and we’re so, so proud of what we’ve achieved,” he says.

Thin Green Line is the first fully improvised episode in the history of Casualty. Set across four days, it follows the paramedic team as they are called to a number of emergencies that become increasingly affected by delays in delivering patients to A&E and long waiting times, which leave front-line staff facing the public’s anger and frustration. Jan (Di Botcher) arrives back from holiday with a spring in her step but is ground down over the course of her shift and makes a terrible mistake, resulting in an accident; Teddy (Milo Clarke)’s confidence is undermined on a difficult call out; and Iain (Michael Stevenson) and Sah (Arin Smethurst) both battle with intensely stressful situations.

According to Sen, developing an improvised episode is less of a story challenge than it is a production one. As such, with experience working in improvisation, longtime Casualty director Steve Hughes was the perfect choice to helm this special episode.

Written by Stephen McAteer, the script was devoid of dialogue and instead contained story beats and explanations of what needed to happen in each scene, without specific directions as to how that would be achieved. Short rehearsals would take place on the day of filming, before Hughes then shot the episode in a documentary style, with minimal, naturalistic lighting, to put viewers in the shoes of the paramedics during a particularly stressful week.

That the episode deals with everyday events – such as an allergic reaction and a cardiac arrest – rather than a set-piece stunt like a plane or train crash also helped to keep it grounded and rooted in the reality of the paramedics’ day-to-day lives.

“I don’t know many shows that would attempt something like this, so all credit to Casualty for doing something that could be quite risky,” says Hughes, who admits there were a few nerves among the team as they began to work out how they would execute the episode.

Hughes’ experience working on Channel 5 crime drama Suspects, on which most of the dialogue was improvised, meant he knew preparation would be key. “What was difficult about it was that, normally, you would have seven pages a day that you would shoot and then you would have the two-page scenes and a three-page scene or whatever. But with this, there was nothing written,” he explains. “We had a good idea of how long we wanted the scenes to go. But because I’m an editor as well, I was editorialising what bits I would be able to cut out. The actors could say something slightly different on each take as long as they didn’t move around too much, because then it would never cut together.”

Meeting the cast for the first time, Hughes ran some improv exercises with the four featured paramedics in the show’s ambulance bay set and talked about his expectations for the episode. What he didn’t want to do was rehearse it like a play and shoot it later, because he didn’t want the actors to know what would happen ahead of time. As a result, the way the actors reacted to their co-stars – and particularly the guest stars playing the patients – was as important as their own acting.

“On the day, they all handled it brilliantly,” Hughes says. “The very first scene we shot was with Teddy [Clarke], where he goes to a flat where there is a guy with a knife who is having a breakdown. But I deliberately didn’t introduce the two of them until we shot it, so there was a real tension from everyone about how it was all going to play out. Straight away, it was clear it was going to work and that using the documentary style can just add a sense of realism.”

Sen says: “You can look at the response of Milo, or Michael, who plays Iain. They’re trying to calm him down in real time. It adds to that sense of truth in that scene; you can feel the tension that you never would if it were scripted.”

Hughes continues: “If it were scripted, everything would have been considered, efficient and clever, but what was nice is [the actors] are really talking to each other because they have to respond to what the other person’s saying. There’s a real back and forth there. We’ve tried to make it as authentic as possible, and that definitely works.”

Producing an improvised episode also meant Hughes and Sen had to have complete trust in their actors to stay in character and naturally react in they way they would have done if the performance had been more scripted. In particular, Jan (Botcher) becomes a central figure in the story as she endures “the week from hell,” starting off in a happy place but ending up in a very dark moment.

“I don’t think that’s unrealistic [in terms of] what the people who do this for real go through,” says Hughes. “There was a lot of trust there. Because I’ve done quite a few episodes of Casualty and we’re all friends, I can be really honest with [the cast] in a nice way and, if there’s something they want from me, they can speak to me. There’s just trust there on both sides, and you can’t do it without trust.”

Shooting the episode was “surprisingly straightforward,” Hughes jokes, although he reveals that the first edit came in at an overblown 83 minutes – much longer than Casualty’s 50-minute slot.

“When we were watching it in the assembly stage, there was a whole episode’s worth of drama in the first 10 minutes and then you’ve got that again,” he says. “It’s not relentless in an uncomfortable way, but it must be what real paramedics feel like. There’s not a lot of let-up for them. The only time they’ve got downtime is when they go home and fall asleep or they’re waiting in these horrible queues, which is one of the main talking points of the episode.”

One of the most challenging aspects for the actors was getting the medicine correct, as this would usually be written down in the script. For example, one particularly stressful scene calls on Teddy to administer a range of treatments in the back of an ambulance as it hurtles towards A&E, with a frightened man shouting at him to do more to help his girlfriend.

“That was a really complicated process,” Hughes recalls. “We threw everything at him [Clarke] – we had the boyfriend screaming, we were shaking the ambulance and he was drenched in sweat. He said that was the first time he felt like a real paramedic, because you’re under so much pressure. But it was great and it adds to telling the story. He was handling the kind of stuff paramedics must have on a daily basis and he did it brilliantly.”

While Thin Green Line is a huge success – dramatic and gripping, yet rooted in natural and authentic performances – “we are not going to do an improvised episode again for a while,” says Sen. “However, it’s really made me think differently about where we go as a continuing drama because it was a real revelation to me. The tendency of soap and continuing drama is to get bigger and bigger and bigger, with bigger stunts, bigger storylines, bigger plot, whatever. And it’s really revealed to me that actually getting smaller, revealing the detail and intimacy of character, is possibly the way to go.

“I’m really aware of the drift of continuing drama. We’ve all seen the drift in soap to get ever more expansive, and that forces you to conjure slightly absurd plotting. But the real revelation is actually that perhaps our direction of travel needs to be more intimate, more characterful and much more focused on character than it is on plot.”

But that doesn’t mean Sen, who directed the one-shot episode, has ruled out pushing the boundaries of TV production further in the future.

“What I really want to deliver to an audience is a consistent quality of episodes week in, week out,” he says. “I want an audience to be hooked, coming back to Casualty for amazing stories delivered in exciting ways as part of Saturday night entertainment. These [special episodes] are great because they’ll draw an audience to a show, but to deliver consistent quality over a long period of time is the greatest challenge longform drama faces considering the competition that is now out there.”