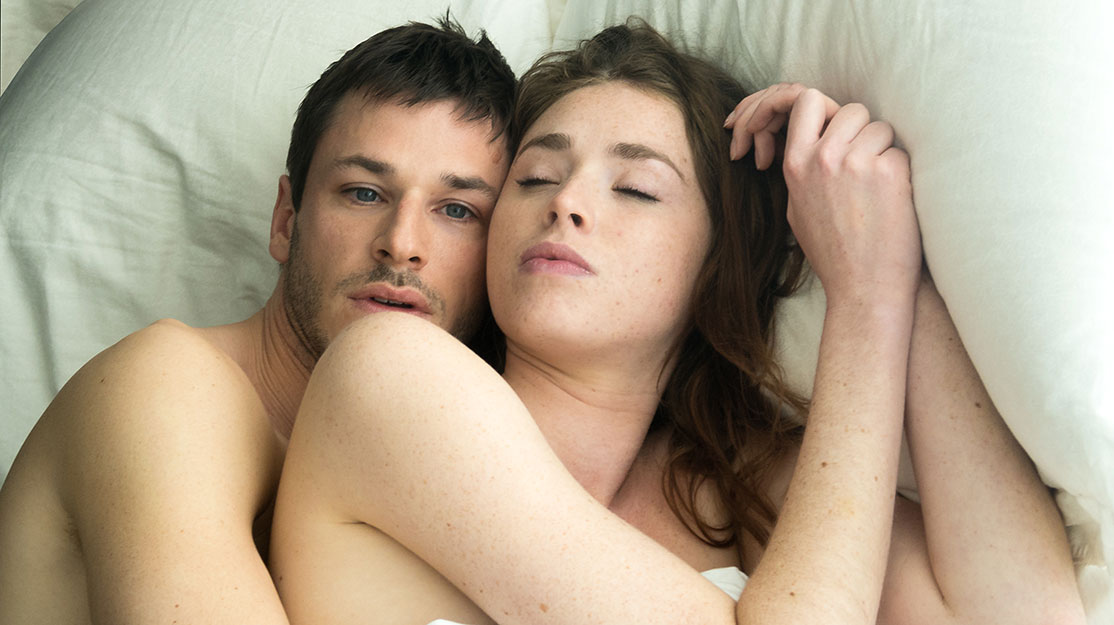 French drama Il était une seconde fois (Twice Upon a Time) places a sci-fi twist on a relationship drama, as a man finds he has a chance to win back his ex. DQ meets the cast and talks to director Guillaume Nicloux about his unorthodox style.

In French drama Il était une seconde fois (Twice Upon a Time), two people are mending their broken hearts in very different ways. Vincent tolerates drug-fuelled parties and one-night stands without much enjoyment. Meanwhile, Louise struggles alone in London, save for a stifling lunch meeting with her father.

But when Vincent receives a package he didn’t order, he discovers the wooden cube inside is a portal to his past – and a potential route to reunite with Louise.

That’s where the sci-fi parallels end, however, with the drama firmly rooted in the emotions of Vincent and Louise, as viewers see the couple fractured in the present but together in the past.

Ulliel says the series speaks to the way people often shut away out of reality, living within a certain fictitious view of the world. “It’s about this man who is trying to heal his wounds by escaping reality and sheltering himself in the past,” he says of his character, Vincent. “He’s actually struggling against destiny. He tries to convince himself he is in charge of his own story, that he’s writing his own story but by returning to the past, he’s literally fighting against destiny.”

Coproduced by Unité de Production and broadcaster Arte and distributed by Federation Entertainment, the drama plays out in the present and nine months into the past, showing Vincent and Louise in parallel worlds – one where they have broken up and another where they are together, though because Vincent has travelled back in time he is aware of how things might end up.

“At the beginning when you see both of them, they’re both apart and struggling with their own things independently. There’s a sense of struggle in both of their lives,” Mavor says. “They haven’t found something that is satisfactory, they’re not living in a way that is fulfilling. Vincent then has the chance to go back into his past and maybe rewrite things and relive the beginnings [of their relationship] and try to make different choices so to not end up in the same patterns.”

But as the four-part miniseries races towards its conclusion, the distinction between the two time periods becomes more muddled, though they are visually distinctive by the different aspect ratios used in each timeline. “It’s like everything’s merged into one and you get that sense of things becoming blurred and the characters being less defined, which is interesting and a testament to the way Guillaume likes to work and his obsessions with the mystical, with the intangible and the unexplainable,” Mavor adds.

Ulliel starred in Nicloux’s 2018 movie Les confins du monde (To the Ends of the World) and it was after they returned from filming in Vietnam that the director approached him about starring in Twice Upon a Time.

Mavor’s casting was a more rapid process, however, meeting Nicloux in a London café just two weeks before filming started.

“We had a very long meeting and he gave me the job there and then, which was quite terrifying,” she admits. “That had never happened to me before. I hadn’t read the script until he physically handed it to me and said, ‘Go and sit in a café and read these four episodes. Then if you want to do it, you can do it.’ I read it and thought it was brilliant.”

The meeting also offered an introduction to Nicloux’s unique personality and directing style. “I read the scripts in a very heightened state because I’d just come from this meeting where he’d done things, like he asked us to go outside and he walked around me in silence, all this weird stuff. Then the first thing he told me was, ‘You smile too much.’ So I stopped smiling. It was interesting because I’d just met him, I got a sense of his aura, his intensity and his personality, so reading the scripts made more sense perhaps than if I’d come at it in my own personal headspace.”

The origins of the series can be traced to a meeting between Nicloux and producer Bruno Nahon, when the director revealed his ambition to create a story about a guy who goes into a cube and ends up in his past, with the chance to relive the love of his life. Nahon immediately called Franco-German broadcaster Arte, where he had produced Ainsi soient-ils (The Churchmen) for three seasons, and found the network keen to work with Nicloux, “one of the biggest names in France.”

Nicloux won a screenplay award at the 2014 Tribeca Film Festival for comedic film The Kidnapping of Michel Houellebecq, while Valley of the Love was chosen to compete for the Palme d’Or at the 2015 Cannes Film Festival. But it’s his approach to storytelling, one that shuns the standard development process, that means he stands out from the crowd.

“The ideas we explore [in the series] don’t come from a rational place,” he says. “There are some writers who arrive with a very clear idea of the story they want to tell but with me, it’s more like an array of floating things — an idea of a cube or a couple. Maybe you’d have a series of random words on a table and you collect them all together and that ends up creating something. You can almost reduce the essence of what the story is to one or two lines because it doesn’t come from a place at that start that’s already fully developed and complicated. It comes from a series of ideas that have been reduced to the essence of what it is.”

“He has an idea of where he wants to go but he doesn’t know the way to get there and you all have to accept it as a team,” Nahon says. “We don’t know. We love it because we don’t know. It’s contrary to the drama scene, where everything should be mapped out.”

Nicloux co-wrote the series with Nathalie Leuthreau (Holiday, Suite Noire), describing the writing process as an “intimate” affair. Arte also proved to be the perfect partner, affording him the time and space his creative process allows, without adhering to deadlines or story meetings. Netflix holds international rights to the drama.

“He wants to remain free and be allowed to discover [the story] as he’s making, so you need those people who will allow that process to happen,” Mavor says.

That approach proved to be particularly challenging during the filming of Twice Upon a Time, with scenes shot in Bordeaux, Paris, Iceland and London. Nicloux prefers to make his films in sequence, meaning the story can shift direction should he wish to follow a different path. But filming a TV series out of sequence meant there needed to be some respect towards what had already been shot and the final goal of the storyline.

“Obviously, in a series you can’t have the luxury of filming in sequence so it means you have to be more rigorous and that’s the biggest difference between the two forms,” the director says. “There are three stages – writing, filming and editing – and hopefully they all somehow feed into each other, up until the point it’s finished and you’re happy with it. That’s what I’m searching to do, that each stage isn’t a result of that first idea but allowing it to be something that feeds and changes the next stage.”

Scotland-born, French-speaking Mavor (Skins, The ABC Murders) describes her first time working with Nicloux as “terrifying. You don’t understand what is going on.”

The director’s unorthodox working style shuns rehearsal and throws the cast straight into the thick of filming. “The first few days were very memorable because we were in London, where I live, and Guillaume was speaking to some extras – they were just people he’d found in a pharmacy and asked if they’d be in a scene. He would just speak to them in French and walk away, but they didn’t speak French so they would look around without having understood a word he’d said and I would jump in and translate briefly, but none of that was explained to me that this was how he would work. It shakes you up, but that process, if you give in to it and let yourself trust that process, it becomes so enthralling, fascinating and fun and it becomes less daunting and scary and becomes this big playground to play around in, which is how I felt. It was always hard work and intense but really fun and creative.”

“He’s always trying to put you on edge and take you out of your comfort zone,” explains Ulliel, adding that often actors would be told different versions of the story by way of influencing their performances. “He’s trying to seize something. There’s a sense of danger I really feel on the set. It’s maybe the only director I’ve worked with who works like this.”

Mavor jokes: “France is notorious for being a bit more relaxed [on set] than the Brits or Americans. I was telling anecdotes about how filming was going and my actor friends and agents were saying, ‘What? What do you mean no-one knows what the script is about? What do you mean he doesn’t call cut?’”

Nicloux says he doesn’t deliberately withhold information from the actors, although he might sometimes choose to. “But I don’t necessarily have the answers and it’s about what the actor and I create. It’s about finding that meaning together,” he adds. “One of the things that may unsettle an actor is not having the answer to why they’re doing something or what the scene’s about, what their motivation is. I don’t have those answers to give the actors. Then it’s for both of them to find the character and that’s what’s fascinating and interesting. That’s why there’s not much preparation. It’s all about constructing and finding it together on the day.”